December 20 2017
25
Soviet school of engineering weapons It was one of the best in the world, but not all samples could go from the prototype stage to mass production. Often, promising systems could not make their way because of the inertia of the existing military leadership, which was reluctant to perceive promising systems. Some experimental samples have gone a very long way to still see the light, but this happened at another time, and sometimes in other countries. And if the machine AEK-971 has found a rebirth in our day already in Russia, the Baryshev automatic hand-held grenade launcher will be made in the homeland of its designer - in Belarus.


Baryshev’s automatic hand-held grenade launcher, also known as ARGB-85, can be attributed to the lucky ones who managed to go all the way from the experimental model to the production model, although this whole journey took almost more than 30 years. This updated grenade launcher is being prepared for release in Belarus at the enterprise Belspetsvneshtekhnika. 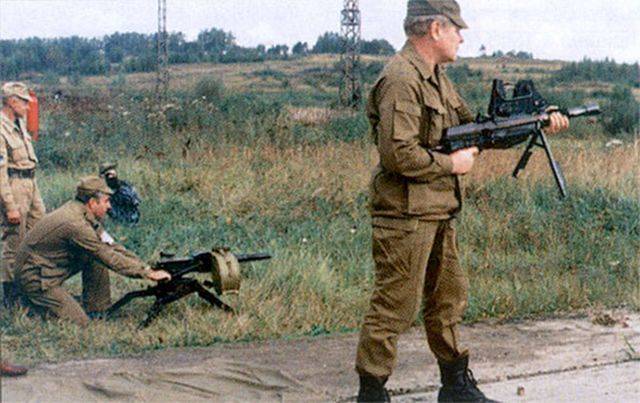 ARGB - Barashev automatic hand grenade launcher. It is designed to destroy fragmentation grenades, both single and group targets at a distance of up to 1000 meters. Anatoly Filippovich Baryshev became interested in developing small arms as early as the 1950s, having since then created a whole line of weapon models. His manual automatic grenade launcher was part of a small arms complex with a new locking assembly created by A. F. Baryshev. The complex included: automatic machines AB-5,45 chambered for caliber 5,45x39 mm and AB-7,62 chambered for caliber 7,62х39 mm; AVB automatic rifle for rifle and machine-gun cartridge 7,62x53 mm; 12,7-mm heavy machine gun KPB and 30-mm automatic hand-held grenade launcher ARGB under a regular shot VOG-17. All weapons of this line united among themselves the sign of the presence of automatic fire. The thing is that the main feature of this line was the original principle of the functioning of the locking device, which was aimed at reducing recoil and improving the accuracy of fire when firing in lines.

The most common small arms are weapons equipped with gas engines (this is a Kalashnikov assault rifle, and the American assault rifle M16). At the same time, everything worked on the recoil energy in the Baryshev system. A semi-free bolt was used in his weapon for work. All samples of its complex of small arms were distinguished by the presence of a very peculiar locking unit, which was created according to a single scheme. The peculiarity was that, along with its main function, it also provided partial absorption of recoil energy when firing, since the bolt details — the bolt carrier, the battle larva, the bolt body and the locking lever were not rigidly interconnected. For this reason, a significant part of the recoil at the moment of the shot went to the sequential setting of these parts in motion, which, in turn, due to the collision of moving elements and stretching their interaction over time significantly (at least 2-3 times) reduced the recoil force. Reducing the recoil force, which at the time of the shot acted on the shooter, allowed not only to increase the accuracy of automatic fire in continuous bursts, but at the same time significantly reduce the mass of weapons - the same 2-3 times. 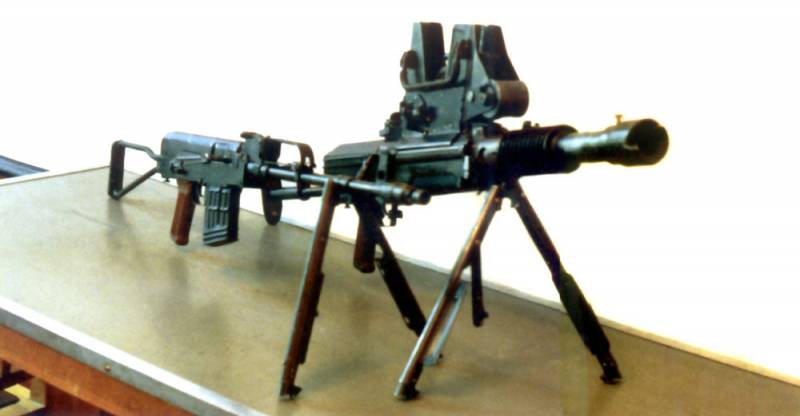 As noted above, the interaction of moving parts of the weapon, stretched in time, could suppress a significant part of the pulse, significantly increasing the stability of the weapon in the hands of the shooter when firing bursts. The dispersion of the Baryshev (AB) design automaton when firing bursts was immediately 12 times smaller than that of AK-74. Such a result could be described only in one word - fantastic. But for everything in the world you have to pay. In this case, it was necessary to pay the reliability of the system. With intensive firing of weapons, the chamber was contaminated by products of combustion, as well as small particles of varnish from the sleeves. The chamber when firing becomes hot, and the cartridges literally begin to stick to its walls. In such conditions, the Kalashnikov assault rifle continues to work smoothly - the dirt for the vapor mechanism is not a hindrance, but the AB starts to fail. It is for this reason that the Baryshev rifle system, despite participating in a large number of competitions, starting from the 60-s of the last century, in many ways has remained forever an experimental system.

At the same time, there is one type of automatic weapon that does not provide for non-stop shooting - this is a grenade launcher. For example, the standard AGN-17 ammunition consists of three boxes, a total of 87 shots. In this regard, the Baryshev system is already really out of competition. According to testers of his ARGB-85 automatic hand grenade launcher, the recoil from it did not exceed the recoil from conventional grenade launchers, which allowed them to hit targets from the shooter at a distance of half a kilometer with quick fire. At the same time, firing from AGS-17 was possible only from a heavy machine. It is no coincidence that interest in the ARGB-85, which weighed about 15 kg, was shown by the special forces of the GRU and the border guards of the KGB, however the imminent collapse of the Soviet Union stopped the development of a hand-held grenade launcher, freezing its fate for a long time. At the same time, at different times in the Czech Republic and in Ukraine, attempts were made to deploy unlicensed production of ARGB, but Anatoly Baryshev managed to patent his scheme and was able to stop them.

For firing not direct fire at the ARGB, it was possible to install an optical sight with a side level and a goniometer mechanism, a folding butt-opener butt and a detachable bipod. In terms of its weight and size characteristics, Baryshev’s grenade launcher significantly outpaced all known systems of automatic hand-held rocket launchers. With a weight in 15,3 kg, its total length did not exceed 950 mm, and with a folded butt - 700 mm. The capacity of the store was 5 shots, the rate of fire - 350 shots per minute, the initial speed of the grenade - 185 m / s. 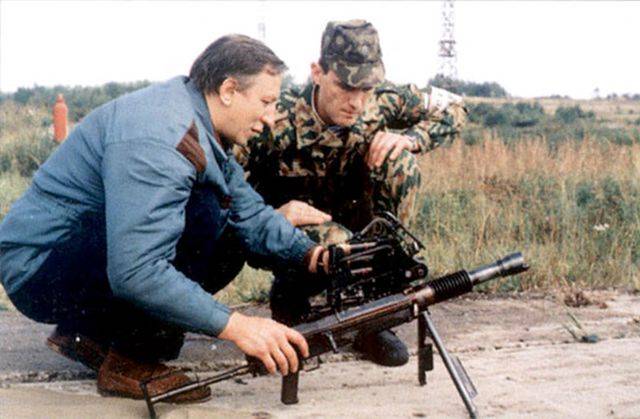 Due to the wide range of X-NUMX-mm shots of the ARGB, it was possible to use it as a powerful offensive weapon of fire support of motorized rifle units. The grenade launcher was indispensable as a means of direct infantry fire escort, especially in offensive combat, as well as in combat operations in complicated conditions: in the mountains, in urban areas, in trenches. Reducing the mass of the grenade launcher, among other things, made it possible to reduce the calculation from the 30-2 to one person, sharply increasing its maneuverability.

The ARGB fully revealed the advantages of the semi-free shutter of the Baryshev system, allowing the shooter to conduct a fairly effective automatic fire, even from unstable positions from the turn and standing from the hip. According to the participants in the tests of this manual grenade launcher, standing from the hip could have been a second or third shot into a truck located at a distance of 400 meters. When firing from the ARGB, the recoil at the time of the shot was felt by the shooter no more than when firing from the 40-mm grenade launcher GP-25, which was mounted on automatic rifles. At the same time, when firing from stable positions (lying down with bipods), a substantial part of the recoil of the weapon was effectively extinguished by a shock absorber built into the butt, thus increasing the accuracy of fire. Experts attributed the indisputable advantages of the Baryshev grenade launcher to the refusal of a gas engine (gas piston, gas chamber, gas lines). This significantly reduced the cost and simplified the design of the weapon, allowing you to achieve improved performance.

Baryshev’s automatic hand grenade launcher, which never entered service and did not go into mass production in the USSR, became the main one for the development of a new Belarusian weapon. June 12, 2017 Belarusian news The Internet portal tut.by said that the Belspetsvneshtekhnika enterprise is preparing for serial production of a unique assault grenade launcher, which should go into service with units of the Belarusian special forces. 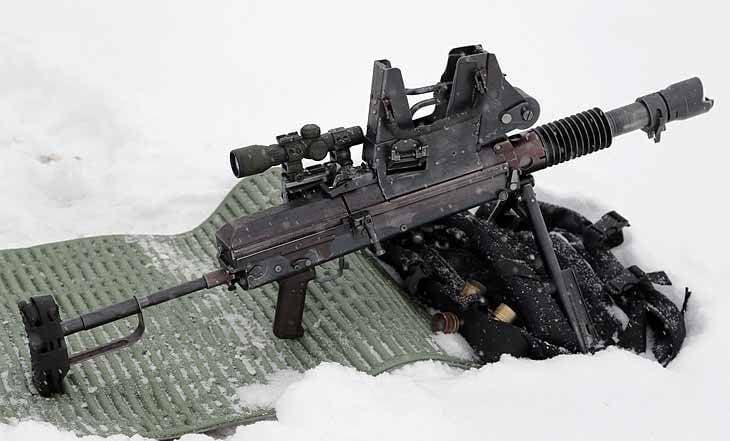 According to Igor Vasiliev, designer of the Belspetsvneshtekhnika enterprise, the ergonomics of the experimental automatic grenade launcher of the Baryshev design have been significantly improved. In particular, thanks to the use of composite materials and titanium, the mass of weapons was reduced to 8 kg. This allows the soldier to use this hand grenade launcher as a classic small arms (eliminating the need for a special machine).

The new Belarusian version of the ARGB provides for the installation of a thermal sight on it, which will allow the use of a grenade launcher in conditions of obstructed visibility and at night. It is also possible to install an optical sight and a laser designator on a hand-held grenade launcher. According to the Belarusian developers, with the help of modern sighting devices, the shooter can confidently hit targets with the very first shots at a distance of up to 1200 meters. 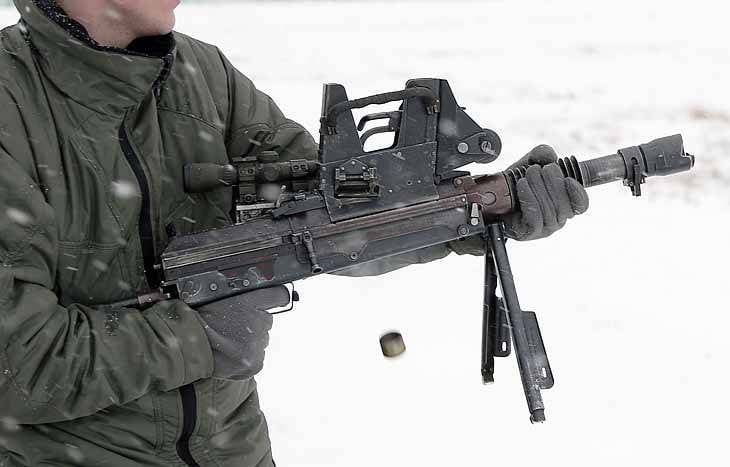 Ctrl Enter
Noticed oshЫbku Highlight text and press. Ctrl + Enter
We are
What is the main machine in the Russian army?Automatic Plant them. Degtyarev A545 and A762
25 comments
Information
Dear reader, to leave comments on the publication, you must to register.