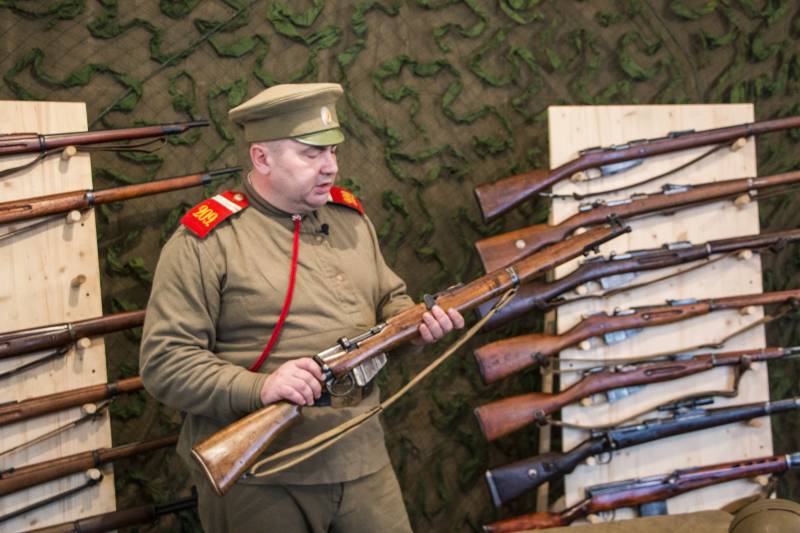 The first Lee-Enfield model, or SMLE, appeared in 1895 g. It was created on the basis of a Lee-Metford rifle of the 1888 sample. 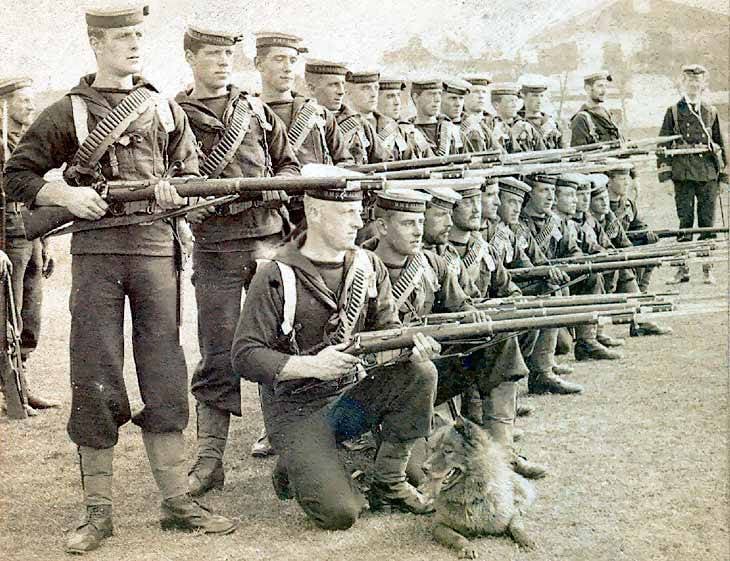 When adopting this model received the designation Lee ‑ Enfield Mk.I. This rifle received baptism during the Second Boer War, and showed a number of serious shortcomings in comparison with the “Mauser” of the 1888 model of the year used by the drills.

The British took into account the experience of combat use, and in 1903, the British Army adopted a new rifle SMLE Mk.II. Its main feature is an intermediate size between a short cavalry carbine and a full-fledged infantry rifle of that time.

In 1907, the SMLE Mk.III rifle was adopted, the main difference of which is the possibility of charging with a clip, that is, packs of 5 cartridges. Prior to this, the rifle magazine was charged one at a time. 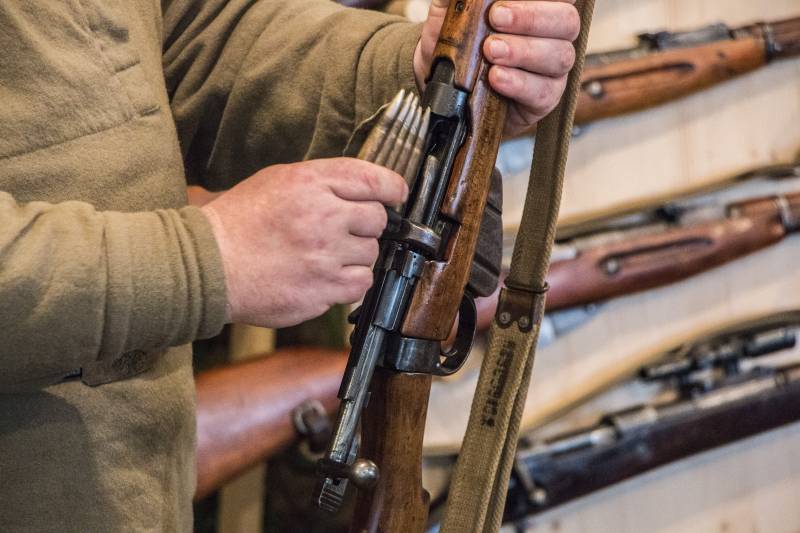 Similarly, the earlier Lee-Enfield designs were modified. In the 1916 year, during the First World War, a simplified version of the rifle was adopted, in which such obviously redundant and obsolete parts as the magazine cut-off and the volley fire were abandoned.

The SMLE Mk.III rifle remained the main weapon of the British army, as well as the armies of the countries of the British Commonwealth (Australia, India, Canada, New Zealand) until the beginning of World War II. 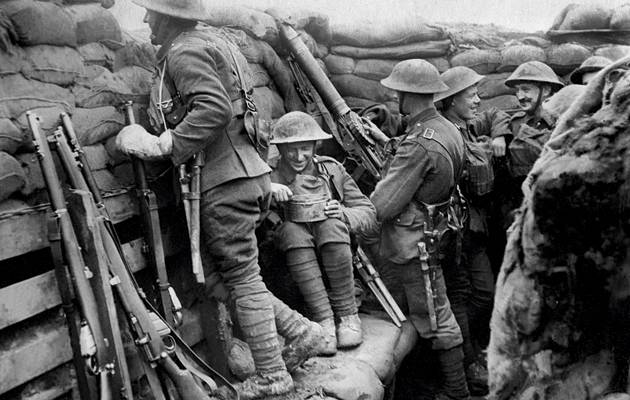 The Lee design store is one of the special features of this rifle. This is a box-shaped detachable store, in which 10 cartridges are placed in a staggered manner. 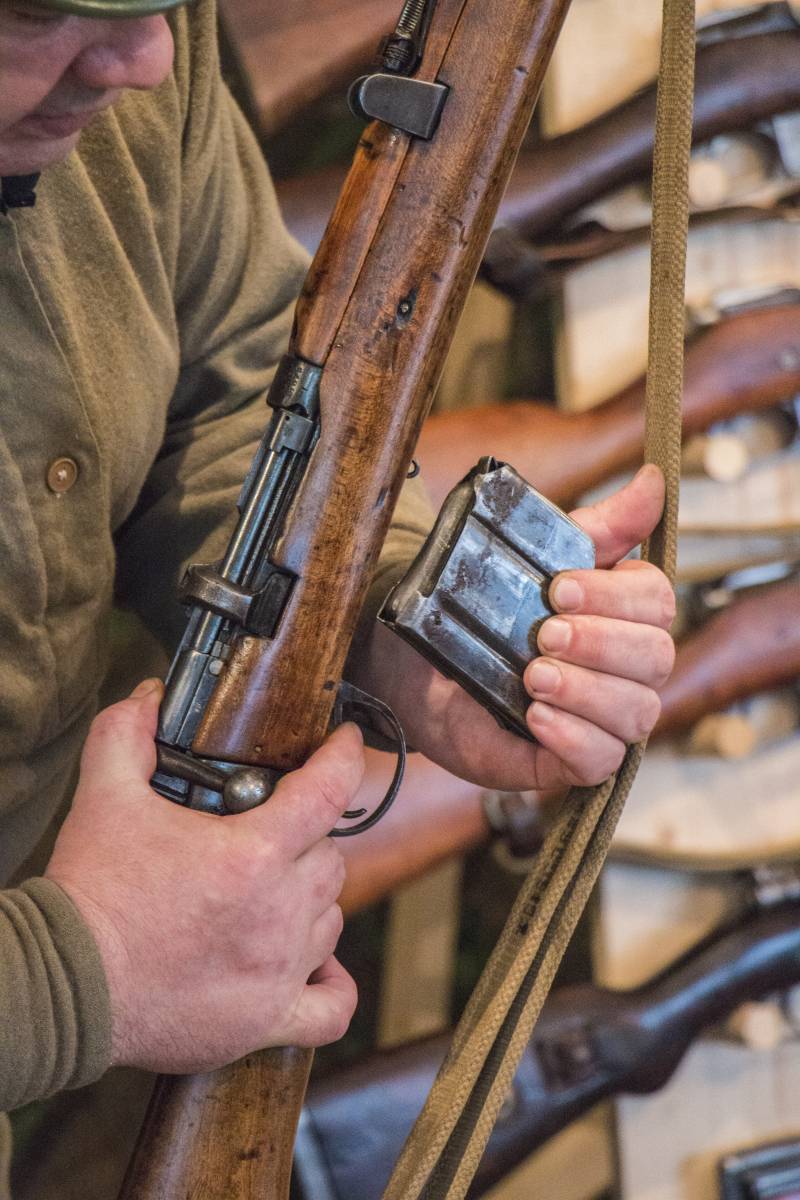 In this case, the store can be equipped only being attached to the weapon, and is detached for cleaning, maintenance and repair. In the early Lee Enfilds, the shops were even chained to the bed.

Equipment stores - through the upper window in the receiver with the gate open, one cartridge each or with the help of two clips on 5 cartridges. Guides for the clips are made in the form of a special "bridge" in the back of the receiver.

Attached to the rifle bayonet with hewing blade, the handle is made of wood. 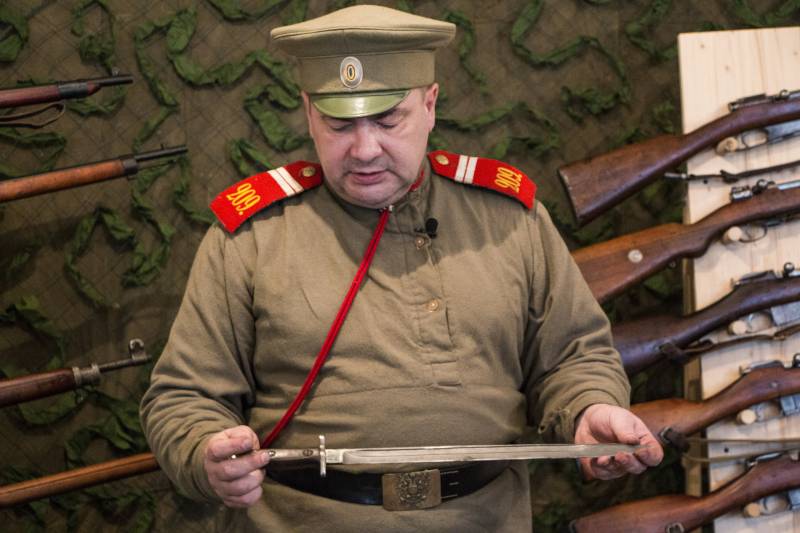 Blade length 430 mm. The bayonet is attached to the massive forearm tip (not to the barrel), worn separately from the rifle, weighs 510 g, the sheath for it is 205 g. In later versions, a needle bayonet could be used. 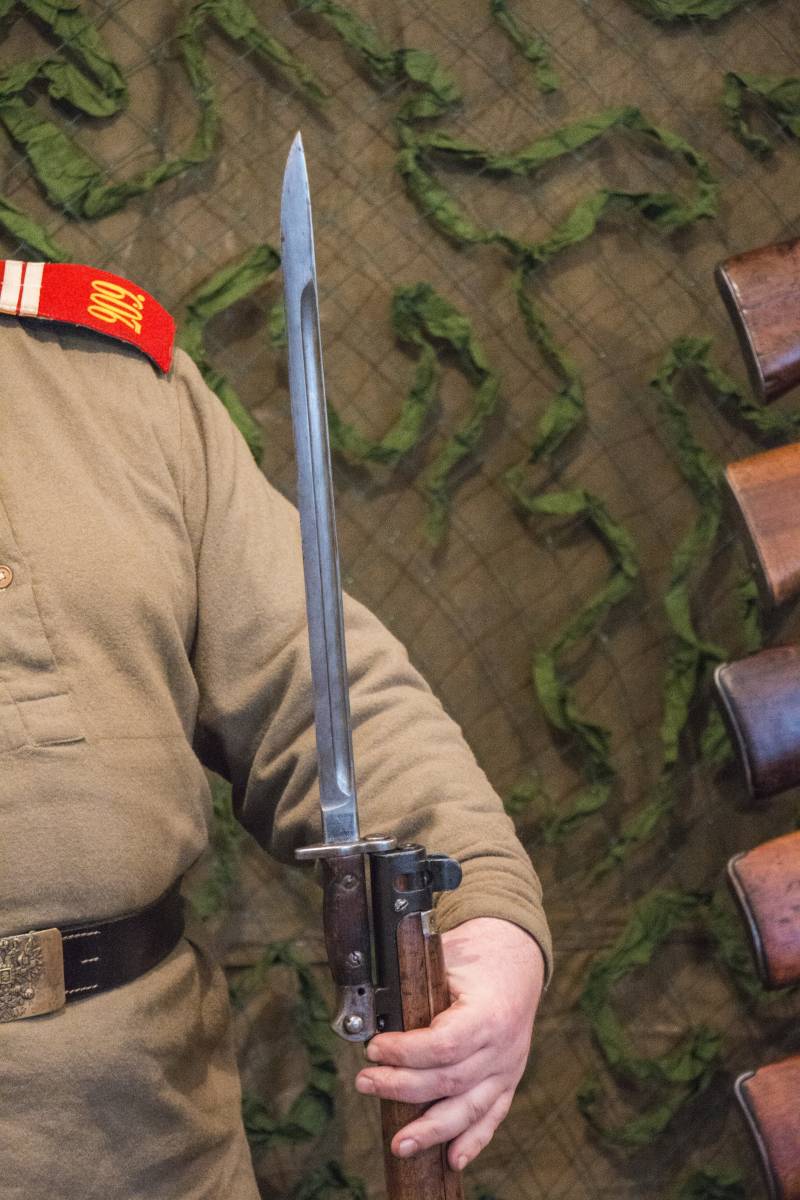 In total, more than 17 millions of rifles were produced, which spread throughout the world.

The rifle had good accuracy, but the main advantage was considered 10-ti charging shop. In many countries, the rifle was nicknamed "eleven charge", since the design allowed the magazine and the eleventh cartridge to be equipped by hand to reach the breech.

Talk about convenience and uhvatistosti can only a fan of British small arms. Having tried all the rifles from the collection of our expert, I want to say that “Lee-Enfield” is the most unique weapon of all the rifles that we have been talking about or will be telling.

Heavy, fat and all kind of uncomfortable, to be honest. And balancing is not very. But this is a private opinion, the whole world fought with this rifle, and the British even more so. The Lee-Enfield weapon was withdrawn only in the middle of the 50-s of the last century, when it was replaced by a semi-automatic rifle. 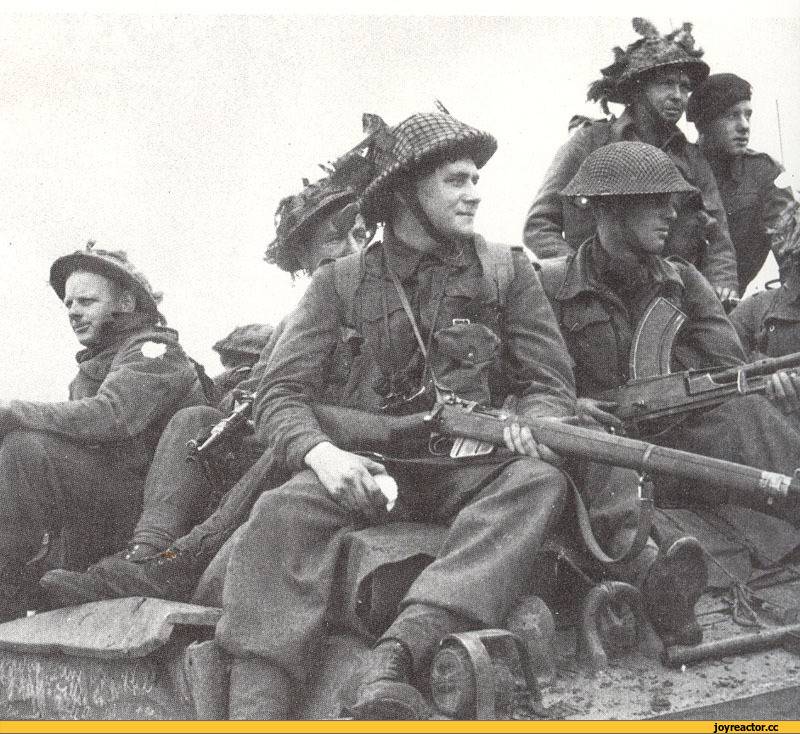 By the way, Lee-Enfield fought in our area.

The rifles went to the USSR from the British army after the Civil War in very large quantities from warehouses in the Murmansk and Arkhangelsk regions, as well as from the republics of Central Asia, where the British actively armed Basmachis.

Also, a large number of these rifles fell into the Red Army from the arsenals of the annexed Baltic states in 1940 year. 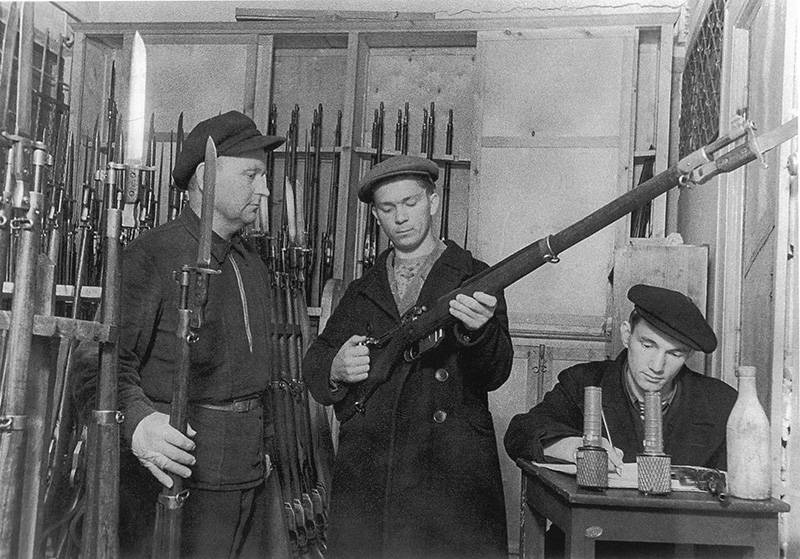 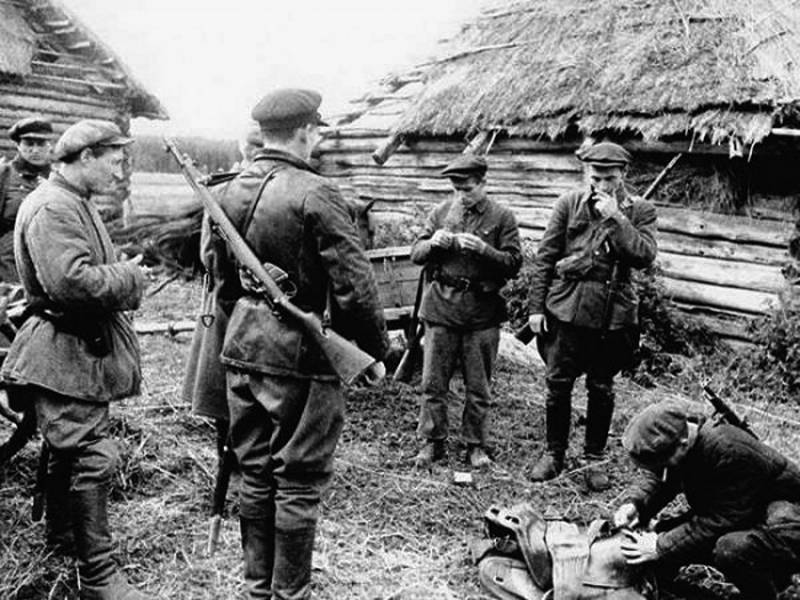 After the loss of 1941, the Lee-Enfield began to enter the operational units of the Red Army and the militia. It is known about the extradition of Li-Enfildov in September 1941 in Leningrad to units preparing for battles on the Nevsky Pyatachka.

Andrey Bondar from the military club will tell about the device of the rifle historical reconstruction "Infantheria".

Other articles in this series: