On September 29, 2017, the U.S. Army decided to purchase an unknown number of Trophy systems as part of an urgent request. General Dynamics Land Systems is responsible for installing the system on the main combat Tanks M1A2 SEP v2 armored brigade group ABST. It has not yet been officially announced, but it is likely that all 90 ABram tanks of the ABST group will receive KAZ Tgoru. The Jerusalem Post newspaper stated that the system has an estimated cost of about 350 thousand dollars per tank. By March 2019, all M1A2 SEP v2 tanks included in the contract will receive KAZ Trophy. It is planned to deploy these tanks in Europe by 2020.

The complex of active protection Trophy was developed by the Israeli company Rafael Advanced Defense Systems. It consists of a radar company IAI Elta Group with four flat antennas placed on the front and stern parts and sides of the platform, whose task is to determine the attacking ammunition: anti-tank guided missiles (ATGM) and reactive anti-tank grenades (RPG). After determining the direction and speed of the attacking ammunition and the appearance in the interception zone, the MEFP counter-missile is fired off, operating according to the principle of a shock core, which destroys the ammunition in the air approximately in 10-15 meters from the vehicle. The overwhelming majority of modern ATGMs and RPGs equipped with a cumulative warhead lose almost all of their armor-piercing ability if the cumulative jet is damaged. Studies have shown that piercing a cumulative jet with a single metal fragment reduces the armor-piercing ability by more than 70% - the mass of fragments a la shotgun created by the Trophy MEFP counter arm pierces the ammunition warhead in many places and detonates it several meters away from the car, in fact by reducing the impact of the cumulative jet to a minimum.

The purchase of the KAZ Trophy does not necessarily mean that the US Army will adopt this system in large quantities. This is just an urgent request, because the United States is interested in the development and deployment of the modular active protection system (MAPS), which combines active protection and optical-electronic suppression systems and allows using various means - thanks to its modular concept. counteractions included in currently available active protection systems (SAZ; SAZ refers to both active protection complex and optical-electronic suppression complex). It should however be noted that urgent requests are sometimes used by the military of different countries in order to do without lengthy trials, and in some cases also without a tender. The US military claims that the Trophy system was chosen primarily because of its high level of technological sophistication. Unlike other types of SAZs tested by the US military, the Trophy is mounted on combat vehicles operated by the Israeli army, such as the Merkava Mk.4M MBT and the Namer heavy armored personnel carriers.

Prior to the order of the KAZ Trophy, the US Army apparently encountered some problems when trying to integrate the components of the active defense system into the M1А2 Abrams tank. According to the Inside The Army website, the imbalance in mass has become a limiting factor, which also adversely affected the work of the tower. At the end of August, the KAZ Trophy was tested on a stationary tank, after which a full cycle of tests was carried out over 30 days with several real combat scenarios, including shelling of a moving tank.

Tanks М1А2 SEP v2 Abrams, equipped with the KAZ Trophy, as already mentioned, are intended to equip the American contingent stationed in Europe. The development of Russian defense technologies and the increased activity of the Russian military forced the American army to again focus on ground equipment and symmetrical conflicts. The Americans also decided to modernize a certain amount of the Stryker ICV armored vehicle into the new version of the Dragoon, installing one of the SAZs on them so that the Russians could not surpass them in Europe. In addition, Javelin ATGM launchers will be installed on the basic version of the Stryker ICV, while several options are being considered for the installation of short-range anti-aircraft systems. 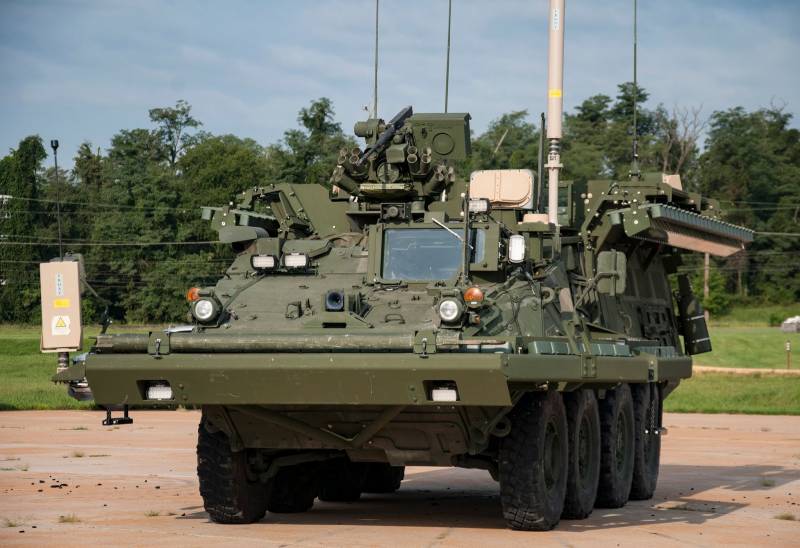 The US Army is still testing the KAZ Iron Fist of the Israeli Military Industries and KAZ Iron Curtain; The latter system was created by the American company Artis under a contract with the DARPA Advanced Defense Research Authority. Artis installed the KAZ Iron Curtain on the Stryker armored vehicle; It is expected that the tests will last until the end of the year, when the army is an example of the decision to buy this system or install another KAZ on the Styker machines. For example, KAZ Trophy is also available for the Stryker armored vehicle and it would be useful to reduce the number of new types of SAZ purchased by the military, as this will simplify logistics and reduce the cost. However, the countermeasure mechanism of the MEFP Trophy system is considered less suitable for installation on BTR and BMP vehicles. The installation of the Trophy system primarily on the M1 Abrams tank is explained by the priority of this program, funds for which were allocated as a matter of priority in the 2016 year.

The United States also planned to test the Active Defense Active Defense System (ADS) system developed by ADS, a joint venture of German companies Rheinmetall and IBD Deisenroth Engineering, but could not finance the testing of several systems simultaneously. At present, it is not known when and whether the American army will test the ADS system at all - it all depends on the budget. As reported news Defense News Agency, the U.S. Army, is currently interested in at least one more system - it’s clear that this is ADS — but cannot afford to test four different SAZs at the same time. If the army could afford it from a financial point of view, then it would already be testing now. Rheinmetall made an offer to the U.S. Army rather late when negotiations with three other bidders were already completed, although it was able to organize several demonstrations of the capabilities of its system in Europe. During the last known show held in Sweden in June, ADS was able to hit six of the six ATGM vehicles. During previous tests conducted in May 2017, two RPGs fired from close range were stopped by the ADS system, while its sensors ignored smaller threats, for example. 7,62 mm bullets. 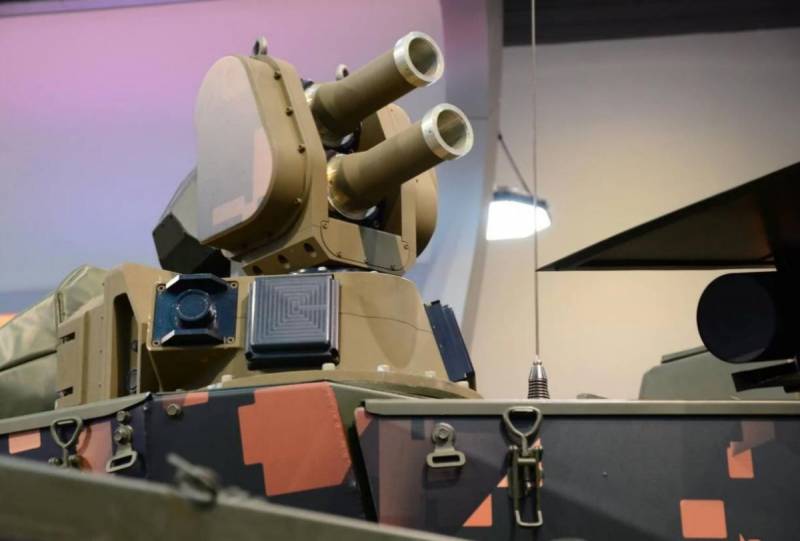 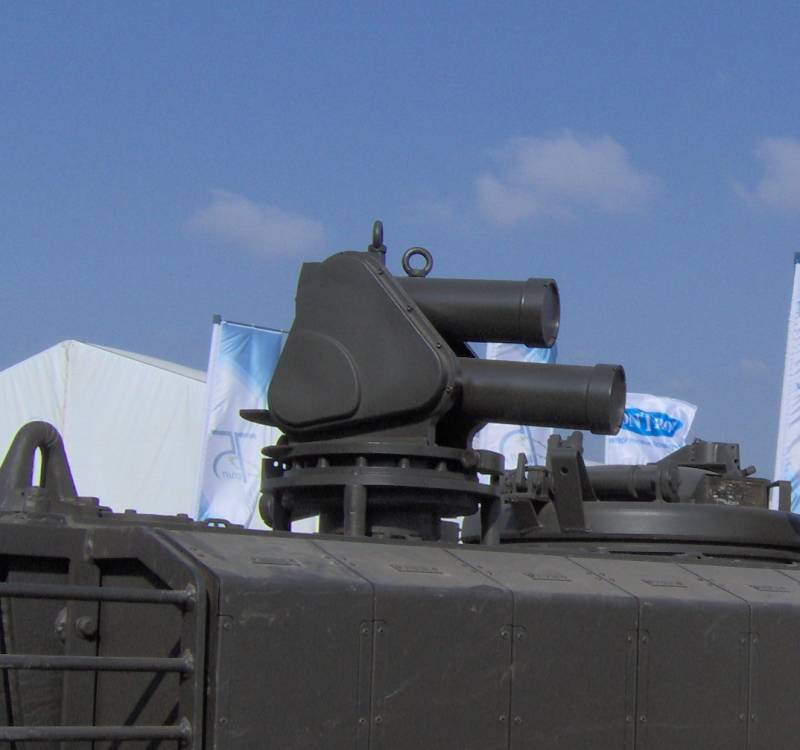 The Netherlands also decided to evaluate the KAZ Iron Fist in order to install it on its CV9035NL BMP. BAE Systems was contracted to install this system into the CV9035 machine, which should be completed at the beginning of 2018. This prototype will then be tested in the Dutch army, which, in case of a positive test outcome, will be able to order the KAZ Iron Fist at least for those operating CV90 infantry vehicles. At IDET 2017, held in the Czech Republic, BAE Systems presented the CV9030 armored vehicle equipped with the Iron Fist Light Configuration (IF-LC) for the first time, but it was an inoperative layout. When installed on the CV9030, KAZ IF-LC includes two dual high-explosive fragmentation grenade launchers, the task of which is to combat anti-tank and RPG. 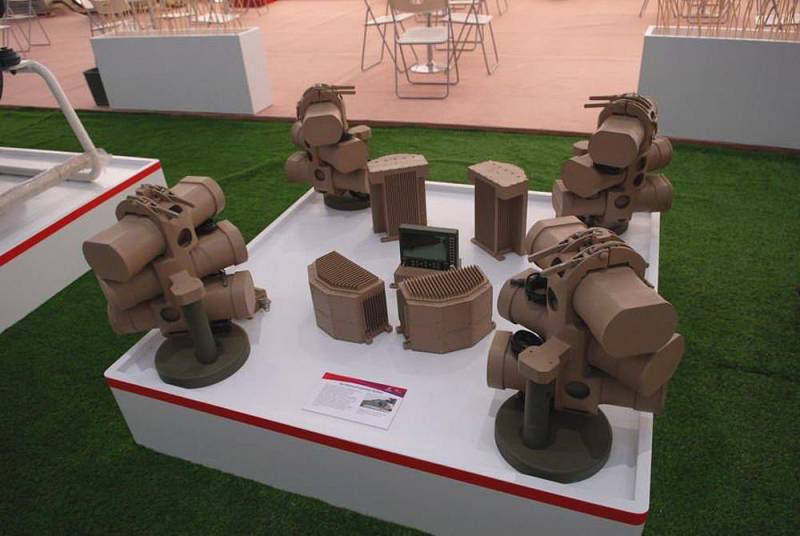 The DSEI 2017 SAZ Active Defense System was shown on a demo of the Leopard 2 Advanced Technology Demonstrator.

As the company's representative at the DSEI 2017 exhibition said, Germany is evaluating the ADS active protection system for subsequent installation on the Boxer armored personnel carrier. At the same time, it is not known whether Germany plans to install SAZ on its MBT Leopard 2 MBT in the near future. However, in a recent document published by the German Army Command, it is planned to adopt a system of active defense and new dynamic defense, with a special emphasis on protecting the roof of tanks and other armored vehicles from the top-attacking ATGM. The ADS system incorporates special actuators and sensor units installed on the roof to protect against such threats.

One of the Boxer CRV cars, sent for testing in Australia, was also equipped with an ADS complex for protection against ATGM and RPG. Although during testing some ADS prototypes were able to successfully hit armor-piercing piercing shells, including their newest versions, currently the proposed APS system options are not suitable for dealing with kinetic-type projectiles. It is very likely that the ADS system will also be offered (optional) for the Challenger 2 (Challenger 2 LEP) tank upgrade and life extension program, since Rheinmetall is one of the two companies selected for its implementation - owns Gesellschaft fur aktive Schutzsystem - system developer ADS. At one time, from May 2005 to December 2006, the UK worked with the Swedish company Ekers Krutbruk Protection AB, owned by IDB Deisenroth (the second developer of the ADS complex) as part of the KAZ ADS technology demonstration program for the FRES project (Future Rapid Effect System - Advanced Fast System response). After the termination of funding, the FRES project was closed. 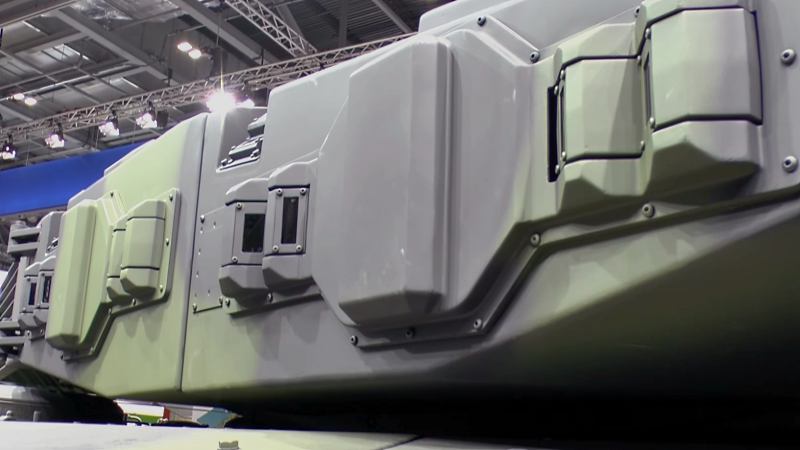 A few months ago, China showed the GL5 active protection complex of its own design. This system, by its general concept, is rather similar to the Soviet KAZ “Drozd” and the new Russian KAZ “Afganit”. It consists of four radar stations (mounted on corners of the hull or tower of the tank) and four fixed “masts” installed either on the roof of the tower or on its sides. On each mast three trunks with protective charges mounted at different angles are fixed. This allows KAZ to provide all-round protection for the tank, while it is worth noting that the GL-5 complex is not capable of shooting down the missiles attacking from above, its protective charges cover the sector in 20 ° in angle of place. The system is controlled from a single control panel installed in the tower.

The system uses high-explosive fragmentation grenades capable of intercepting ATGMs, RPGs and cumulative shells fired from tank guns. The interception point is located approximately 10 meters (± 1,5 meters) from the protected machine. The radar has a range of the order of 100 meters. If the attacking ammunition, for example, the ATGM, enters the sector served by radar, the radar switches to tracking mode. In this mode, the computer processes the signal reflected from the target, determining the speed of the ammunition and the approach angle. After processing, the computer determines the sector in which the munition falls, and calculates the meeting point of the munition and the protective projectile and, at the right moment, shoots back the protective charge. In the animated 3-video on the website of the Chinese manufacturer, the company Norinco, it is clear that one protective projectile is launched to defeat an ATGM; however, two protective charges are launched on slow-motion shots (below) of a real attack to defeat one ATGM. This may be a mistake that needs to be corrected, or a flaw in the system, which in some cases may require two defensive projectiles.