December 18 2017
21
New Israeli missile defense systems are of interest to both residents of this country and foreign specialists. A few months ago, the full-fledged service of the promising Kela David complex began, and by now the first real results have been obtained. Some details of the development program of the complex and its subsequent operation a few days ago revealed the edition Israel Defense.


7 December edition published an article by Dan Arkin, “Provide national defense,” describing the current status of the latest missile defense systems. In the subtitle of this publication, it is noted that in the half year that has elapsed since setting on duty, the Kela David systems have found their place in the Israeli air defense and anti-missile defense system of Israel.

An Israeli author points out that the air defense system is currently undergoing a large-scale modernization program. The essence of the changes is to adapt the existing grouping in accordance with the new and current threats. The country is now threatened by heavier and more accurate range munitions. Also, the enemy can use cruise and ballistic missiles, small reconnaissance vehicles, etc. 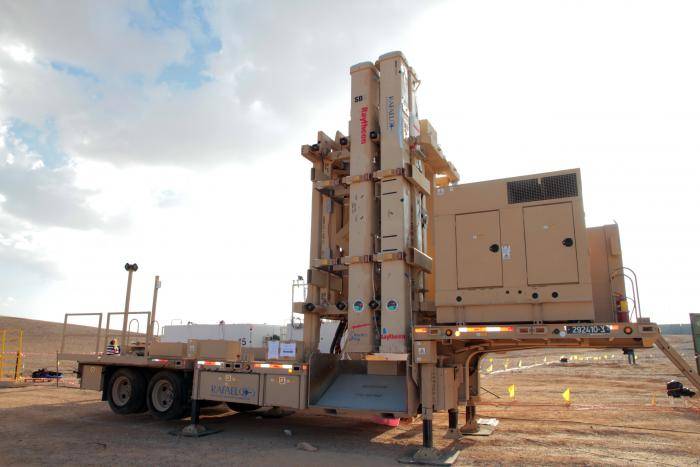 The response of the Israeli Air Force to the Israel Defense Forces is well known: it creates a layered air defense and missile defense system covering the entire territory of the country. The structure of this system includes separate complexes "Kipat Barzel", "Kela David" and "Homa". The integration and sharing of all these systems protect the entire territory of the country and prevent any weapons in the covered area.

D. Arkin calls the complexes "Kipat Barzel" and "Khoma" real veterans - they have already managed to work with real goals. The third and the newest element of the missile defense system is the Kela David complex (David's sling), formerly known as Sharvit Ksamim (The Magic Wand). On April 2, in the presence of military and political leadership, a solemn ceremony of putting the first Prascha on combat duty took place.

It is argued that in parallel with the deployment of new complexes, the project is being improved. Each new sample of Kela David receives an updated database of threats and is being finalized in other ways.

All the complexes "David's Great" are consolidated into the 66 division as part of the air force. In the past, this compound used a barrel artillery, but now has the most modern anti-missile system in service. The main base of the division is in the south of Israel, but its command post is responsible for the defense of the entire territory of the country.

D. Arkin notes that the base of the 66 division is significantly different from the facilities on which other missile defense systems are deployed. In the case of the “Khoma” or “Kipat Barzel” systems, a command post, means of detection, launchers, etc. are deployed in a small area. With the latest "Prash" the situation is different. At the main base there are only battalion command, warehouses, transport, etc. Launchers with antimissiles, in turn, are distributed throughout the country and are controlled by their own field operators.

Unlike other new tools, Kela David is not a regional, but a national defense system. The area of ​​operation of this complex covers the entire territory of Israel. It uses the principle of centralized management.

According to official data, the Kela David complex is capable of intercepting various targets. It can be used to protect territories from operational-tactical class ballistic missiles, cruise missiles and other similar threats. The overall composition of the complex is quite simple and includes control systems, a radar detection and tracking system, as well as launchers with interceptor missiles.

The battery of the complex is completed with four launchers with 12 missiles each. The anti-missile has a two-stage architecture. It uses two systems of homing, radar and optical-electronic. The most important feature of the Intersector of David's Interceptor is the method of hitting the target. To effectively defeat the target, the kinetic principle is used - the anti-missile literally crashes into the attacked object.

The commander of the 66 Division is Lieutenant Colonel Kobi Regev. He says that managing this compound, equipped with the latest complexes, is a great honor. In addition, not only military, but also important civilian tasks are assigned to the division. The division command is responsible for coordinating the actions of the entire Israeli missile defense system, as well as for informing the population about the dangers.

It is the missile defense command center that provides data on existing threats and warns civilians. Allegedly, a highly effective alert system has been established in Israel. Thus, even if the enemy’s rocket manages to break through all echelons of defense, citizens will be warned and not hurt.

Lt. Col. K. Regev commented on how to deploy anti-missile systems. According to him, the national missile defense system “Kela David”, unlike other complexes, does not need to be tied to specific objects or settlements. It is obvious that radar stations should not be placed in front of the mountains or radiating antennas of other objects. However, the open space for the deployment of an anti-missile system does not necessarily have to be located near the sheltered city.

The commander of the anti-missile battery, according to K. Regev, is a major. The battery personnel and weapons detection tools are included in the battery. The battery also has its own technical maintenance and logistics specialists. The number of launchers and antimissiles in one battery is determined in accordance with existing requirements. If necessary, the connection can be strengthened.

At the heart of the main concept of operation and combat use of the Kela David complex is the idea of ​​integrating several such systems. The simultaneous use of three types of missile defense systems allows you to securely close airspace. To repel a specific attack, a system should be used that can show the greatest effectiveness in the existing conditions.

The main advantage of Prast David, according to Lt. Col. Regev, is the ability to effectively intercept large-sized high-precision missiles. This complex occupies an intermediate position between the other two systems of its class and in fact assumes the most difficult goals.

According to K. Regev, the organization of missile defense should remember the characteristic differences from anti-aircraft systems. In this sphere, the allowed reaction time is limited to seconds, which is associated with a large number of threats and their high speed. As a result, the complexes should be on duty around the clock and be constantly ready to repel an attack.

Israel Defense recalls that the complex “Kela David” has automatic and semi-automatic modes of operation. In this case, the main is the mode involving human participation. After detecting the target and taking it to escort, the operator of the complex must confirm the launch of the anti-missile. Further, all tasks are solved by the interceptor independently. The commander of the 66 Battalion called the Prascha missile interceptor an amazing product capable of destroying high-altitude, high-speed and high-precision targets.

Having become a real technological breakthrough, the Kela David complex attracted the attention of the foreign military. For example, Poland wants to get its own missile defense system. She bought the American Patriot anti-aircraft systems, which are supposed to use Prasch anti-missile missiles. Launcher of the Israeli complex, some elements of the rocket, etc. produced by the American company Raytheon, which may to some extent simplify its promotion in the international market.

The Kela David missile defense complex was created by the Raphael company in cooperation with other organizations in accordance with the order of the Advanced Development Department of the Israeli Defense Ministry. The head of the program for the development of this weapon, Brigadier General of the Reserve Pini Yongman, claims that the experience of the Raphael company in the field of air-to-air missiles was used to create the anti-missile system. It was proposed to create an interception system capable of detecting an existing threat as quickly as possible. In addition, there was a proposal to intercept both ballistic missiles and aviation means of destruction.

The American company Raytheon joined the project quickly enough. At a certain point in time, several thousand people worked on the project. In 2012, flight tests of the new missiles and the entire assembly began, continuing until 2015. Curiously, some test launches were conducted in the presence of top management of the US Missile Defense Agency.

To date, the author points out, the Kela David complex has been put on duty and the necessary number of batteries have been deployed. The personnel for such systems are trained at the Air Defense School at one of the southern bases of Israel. This institution trains all specialists, from complex operators to commanders of one level or another. Earlier, when the 66-th battalion was just being formed, the calculations were made up of soldiers who previously operated other missile defense systems. The technical staff for the maintenance of missile defense is being prepared in Haifa.

One of the main means of training future operators is a special simulator developed by Elbit. This product fully imitates all stages of the combat operation of the anti-missile complex. Simulates the process of tracking the situation, target detection and interception. In addition, an imitation of interaction with other means of missile defense is provided. The use of simulators allows you to carry out the required training of personnel, without diverting the real complexes from duty. In addition, this approach allows not to spend very expensive rockets.

Career growth of the future operator of the complex "Kela David" is no different from the promotion of the service of other fighters from the air defense. After the course of the young soldier, the soldier will serve in one of the air defense units, including, possibly, using the Sling of David. Then he can protium general officer officer course, followed by training at the School of Air Defense. The camera crew of the anti-missile complex consists of several soldiers and an officer. In this case, the launch is carried out by a soldier-operator.

Currently, the 66 th battalion of the Israeli Air Force air defense remains at the stage of construction of new facilities and the deployment of additional complexes. The total number of Kela David systems on duty and planned for deployment, however, is not specified.

Israel Defense indicates that the number of launchers and interceptors required depends on the main features of the current threats. The mission of David's Prasch is to intercept relatively large and heavy missiles with an appropriate range, and the industry intends to maintain such anti-missile capabilities by constantly updating them. "Prrasha" should work together with the "Iron Dome" and hit those goals with which it cannot effectively fight.

Ballistic missiles are the main means of enemy attacks and the main threat to Israel. To counter such weapons, first of all, new complexes are being developed, such as Kela David. Thanks to such technical and technological breakthroughs, the Israeli air force, which is responsible for missile defense, can be considered the world leader in this field.

Nevertheless, as Dan Arkin writes, missile defense systems cannot ensure timely and correct interception of all targets, creating a “hermetic” defense of the country's airspace. Despite this, industry and the military are doing everything possible to ensure that the minimum possible number of threats break through through anti-missile systems.

Ctrl Enter
Noticed oshЫbku Highlight text and press. Ctrl + Enter
We are
Reports from the militia of New Russia for 27-28 September 2014 of the yearMemo to mercenaries in Africa
Military Reviewin Yandex News
Military Reviewin Google News
21 comment
Information
Dear reader, to leave comments on the publication, you must sign in.