The National Interest: Russian pistols were created for a brutal and bloody war

December 14 2017
114
Small weapon The Soviet Union and Russia were exploited both in our country and abroad, and thanks to this they gained deserved fame throughout the world. Old and new samples naturally attract the attention of specialists and weapon lovers, and also regularly become the subject of various publications, articles and books.


9 December: The National Interest published the next article by security expert Kyle Mizokami. The material titled “Russia's hand-made gangs for only one Thing: Tough and Bloody Wars” (“Pistols of Russia were created only for one thing: for a brutal and bloody war”) was assigned to The Buzz and Security headings. As the title shows, the subject of the article was pistols of Soviet and Russian design, as well as their characteristics and capabilities.

K. Mizokami begins his article with a reminder of the events of the recent past and their consequences. Thus, becoming the successor of the Soviet army, the Ground Forces of the Russian Federation inherited from it huge stocks of various small arms. At the same time, the quantities received were redundant for a smaller army. As a result, a significant part of the weapon went to storage. Warehouses with stocks of various small arms are available in all 11 time zones. 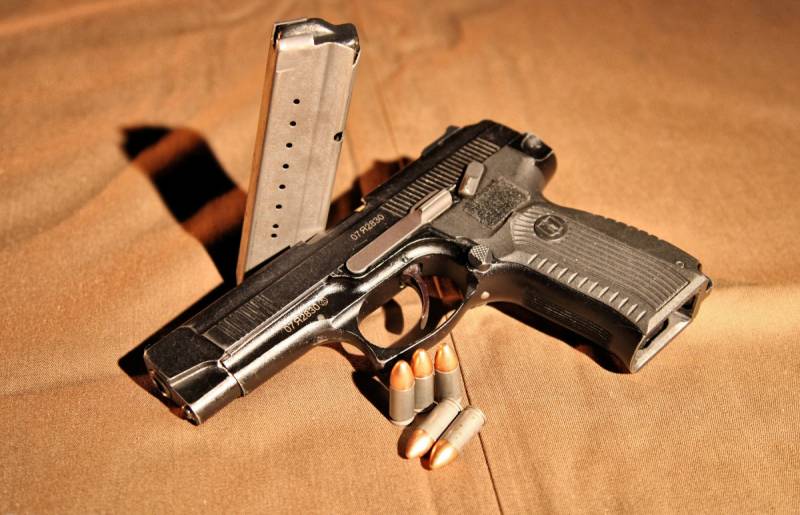 Different samples were sent for storage, including service pistols intended for officers, armored vehicle crews and political workers. The author points out that service pistols of all models, both old and new, are considered today both as a means of self-defense of individual servicemen and as a “symbol of power” of their owners.

The author of The National Interest reminds that one of the first samples of its kind, entered into service with the USSR Army, was the “TT automatic pistol” or “Tokarev”. At the same time, K. Mizokami specifies that the term “automatic” in this case means the possibility of self-recharging, but not the presence of an automatic fire mode. Thus, when shooting from an “automatic” TT pistol, the shooter has to press the trigger again after each shot.

"Tokarev" had a utilitarian and unattractive appearance. However, it corresponded to the general Soviet military aesthetics. Like most other Soviet-developed weapons, the TT was easy to use and also showed the required reliability. With all this, the lack of a fuse required care from the shooter, otherwise there was a risk of an accidental shot.

The TT pistol weighed 1,86 pounds (850 g) and used 7,62 x25 mm M30 cartridges (sample 1930 of the year). The internal mechanisms of this product were based on the ideas of John Browning, previously implemented in the gun M1911. So, automation used a mobile barrel with a short stroke and a swinging earring. Most Tokarev pistols can use a Mauser 7,63x25 cartridge — the Soviet 7,62-mm 1930 cartridge was originally created on the basis of this munition. German cartridges were also used with Mauser machine pistols.

The Tokarev pistol was produced by the Tula Arms Plant, which led to the appearance of the designation in the form of two letters "T". Production of such weapons continued until the 1952 year. For two decades of production, the industry has transferred to the army and other structures about 1 million 700 thousands of serial pistols. In addition, TT pistols were produced in Hungary, Poland, Yugoslavia, China and North Korea. Some of these products were manufactured under license, others - without permission.

The next Soviet pistol, as Kyle Mizokami writes, was also “inspired” by one of the foreign models. The author calls the Makarov Pistol (PM) a copy of the German “police pistol” Walther PP, one of the models of small arms produced during the Second World War. The Soviet pistol, known by the unofficial nickname "Makarov", was a copy of the Walther PPK pistol - a modification of the PP product, which was distinguished by fewer parts and greater ease of production. The result is a pistol that looks like a less attractive version of James Bond's weapon - Walther PPK.

The PM pistol was adopted by the Soviet Army in December 1951. The start of the exploitation of this weapon allowed the military to abandon the older “Tokarev”.

PM differed from the TT smaller size and weight. In addition, he had a less long barrel. Makarov pistol was supposed to use the Soviet 9-mm cartridge. K. Mizokami believes that this choice of ammunition was associated with the reluctance of the army to use foreign-developed cartridges. In addition, he recalls the well-known version, according to which the cartridge 9x18 mm PM is a modified version of the German product 9x18 mm Ultra. According to its characteristics, the Soviet patron is relatively weak. In terms of power, it takes up space between the 9x19 mm “Parabellum” and .380 ACP cartridges. Like the Tokarev pistol, Makarov's weapon used a magazine for 8 cartridges.

Like other Soviet-made small arms, the PM was actively used not only in the USSR, but also beyond its borders. These weapons were supplied to armies and revolutionaries from different countries. The armed forces of Afghanistan and Zimbabwe are still using Makarov pistols. In Afghanistan, Grenada, Laos, Iraq, North Vietnam and Syria, the American military had to deal with such weapons.

Also, Makarov relied on the crews of Soviet armored combat vehicles stationed, among other things, in Eastern European countries. If the Cold War had become “hot,” these weapons would have to be used in real battles.

K. Mizokami recalls an attempt to upgrade an existing pistol. So, in the 1990, the “Makarov Pistol Modernized” PMM was introduced. It differed from the base sample by the increased magazine and 33-percentage increase in ammunition.

Later, in the nineties, a new Russian pistol appeared. Designer Vladimir Yarygin developed a promising pistol pistol. This product is also known as the “Rook” MP-443. The new gun was actually a “mixture” of old and new ideas. Like the older TT, the new “Rook” uses some of the work of J. Browning - this time the source of ideas was the Hi-Power pistol. At the same time, the PU has a “modern” double-action firing mechanism. This means that when you press the trigger with a long stroke, both the cocking and lowering of the trigger occur. If necessary, the mechanics of weapons allows you to shoot with a pre-cocking the hammer manually.

Unlike the TT and PM, the pistol of V. Yarygin uses 9x19 mm “Parabellum” cartridges. This ammunition is the actual standard in the field of modern pistols and is in service with many countries.

The TT pistol did not have a fuse, but the draft of the Grach nuclear-powered ship provides several means of protection against an accidental shot. On both sides of the frame are set safety flags, blocking the operation of the trigger mechanism. As K. Mizokami notes, such a system, like many other elements of modern weapons, was proposed by J. Browning. In addition, "Rook" has the means to automatically lock the drummer. This part does not move until the trigger is pulled.

Despite the novelty in comparison with the two other samples examined, the Yarygin pistol does not have some of the features characteristic of modern foreign weapons. For example, there are no standard guides for mounting additional equipment, an indicator of the presence of a cartridge in the chamber and means of removing the weapon from the platoon.

The PU pistol was put into service in the 2003 year. The introduction of these weapons into mass exploitation was associated with certain difficulties and was noticeably delayed. The reasons for this were simple: the Russian army had a large number of PM and PMM pistols.

Service pistols of the Soviet Union and Russia are simple, durable and reliable. They were created taking into account the production and use in wartime. At the same time, they lack some of the features and capabilities available to foreign weapons. For example, Russian pistols are markedly different from the latest American product M17 Modular Handgun System. However, when creating them, the main attention was paid to the functionality and solution of the assigned tasks. This means that Russian TT, PM / PMM and PJ pistols are capable of performing their work in the most difficult conditions.

Pistols from the category of service weapons, for obvious reasons, do not attract much public attention, however, they can be of great interest. A recent article by The National Interest "Russian Handguns Are Only Built for One Thing: Tough and Bloody Wars" clearly shows that the foreign press is ready to pay attention not only to missiles, tanks and airplanes.

Kyle Mizokami’s article concludes with a curious, albeit obvious, conclusion. The Soviet and Russian weapons school focuses on combat capabilities, ease of production and other utilitarian features of weapons. In some cases, however, such factors may reduce the usability of the finished sample or limit its compatibility with additional equipment. Nevertheless, as the American author writes, Russian pistols are created for cruel and bloody wars, which affects their design.

It should be noted that there are some errors in the material from The National Interest, including quite gross ones. Perhaps the most noticeable are the words about the PM pistol as a copy of the German Walther PP / PPK. Indeed, when developing his own gun, N.F. Makarov took into account foreign experience and borrowed some ideas. However, the similarity of the design of PM and PP is limited only by the overall layout and some details. Otherwise, these are different patterns, based on similar ideas. Similarly, the situation was with the cartridges. Despite the similarity of designations, the 9x18 mm “Ultra” and 9x18 mm PM products are very different from each other.

K. Mizokami reviewed some of the design features of the Yarygin pistol and recalled in which project these solutions were first implemented. Comparing the new pistol with a very old Browning Hi-Power looks very funny, but it can hardly be called objective. Modern weapons for the most part are created on the basis of a limited circle of relatively old ideas. Because of this, the simultaneous mention of "Rook" and "High-Power" looks at least strange.

However, the article “Only Hand for One Thing: Tough and Bloody Wars” is of some interest. The foreign press does not often pay attention to the Russian weapons of old models, including those that have been decommissioned. In addition, the article concludes with a very pleasant conclusion about the capabilities of Soviet and Russian weapons to solve the assigned tasks in different conditions.


An article entitled “Compared to One Thing: Tough and Bloody Wars”:
http://nationalinterest.org/blog/the-buzz/russias-handguns-are-built-only-one-thing-tough-bloody-wars-23570