in the land of the rising sun, they closely followed the course of experiments conducted in Europe and the United States to create submarine aircraft. Practical work in this direction took place in the 1923 year, when two Caspar U-1 floated seaplanes arrived in Germany.

After a thorough study of the acquired seaplanes at the Yokosuka Marine Arsenal in 1925, the creation of the first Japanese submarine aircraft, the Yokoshi 1-Go, began. The plane looked similar to the German Caspar U-1, but had a more powerful 80-strong 9-cylinder radial engine of the French company Renault and a four-bladed wooden propeller. The maximum flight speed of the Japanese hydroplane was 154 km per hour (versus 145 km per hour U-1). 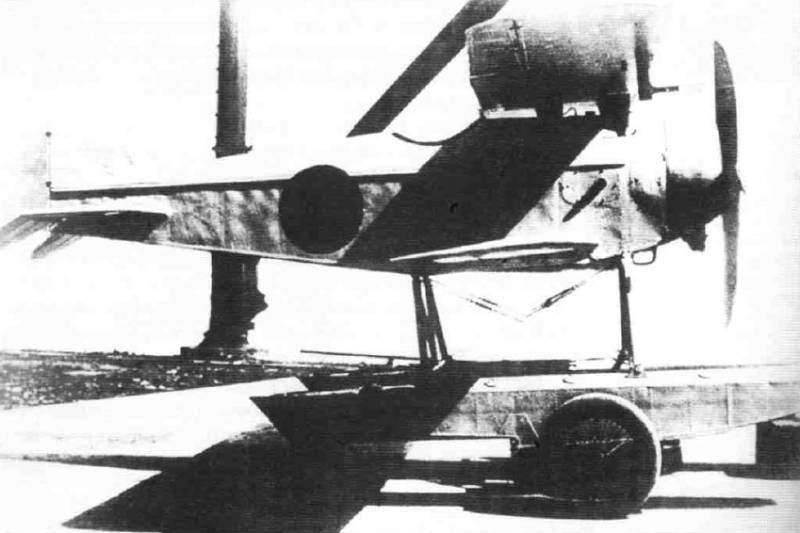 Experimental seaplane "Yokoshi" 1-Go (the only photo that has survived)

The Yokoshi 1-Go had a mixed construction: a metal tubular frame, wooden wings, duralumin hood and floats (everything else had a plain skin). For placement in a cylindrical hangar with a length of 7.4 meter and a diameter of 1.7 meter wings and floats undocked. The project stipulated that a team of five people would take four minutes to assemble an 1-Go and an additional 10 – 12 minutes to prepare for the launch, and the disassembly would take about two minutes.

The first prototype of the Yokoshi 1-Go was built in the 1927 year. For sea trials, the Japanese fleet allocated an underwater mine layer I-21 with a surface displacement of 1380 tons (submerged 1768 tons) and a travel speed in the surface position of 14.5 nodes. To accommodate the seaplane behind the fencing of the cabin, a waterproof cylindrical hangar of a “heavy” type was mounted. The launch of the 1-Go into the water and its rise from the water was carried out using a special crane.

Intensive testing of the Yokoshi 1-Go was carried out for 18 months in the years 1927-1928. The real time it took to prepare the seaplane for departure was as much as 40 minutes (instead of 16 under the project)! The low speed of the flight and its short duration (only two hours) were also unsatisfactory. In passing, it turned out that the submarine with aviation the hangar should have a large displacement. 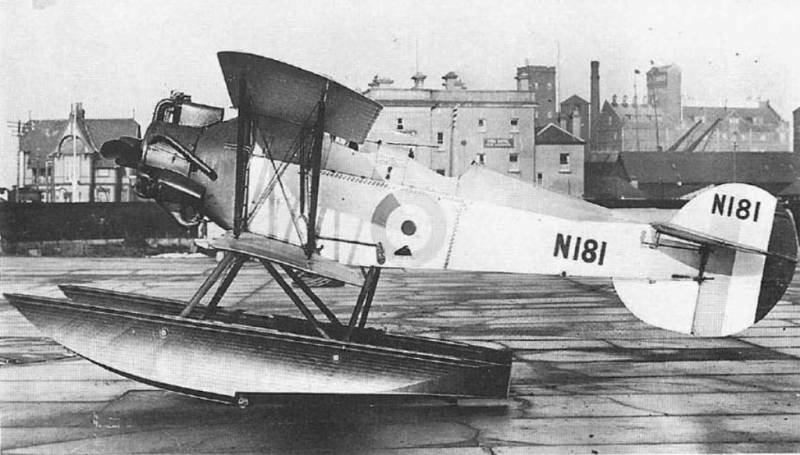 At its base in Yokosuka Naval Arsenal, Japanese engineers developed a new seaplane project, the Yokoshi 2-Go, which outwardly resembled its progenitor, but was smaller and became single-seater. The metal tubular frame of the fuselage and wooden wings were covered with canvas. The tail fin is placed under the fuselage, and the horizontal tail is in its upper part. For placement in the hangar of the submarine wings and floats made removable. The power plant "Yokoshi" 2-Go was a licensed copy of the English radial five-cylinder 130-strong engine "Mongoose". 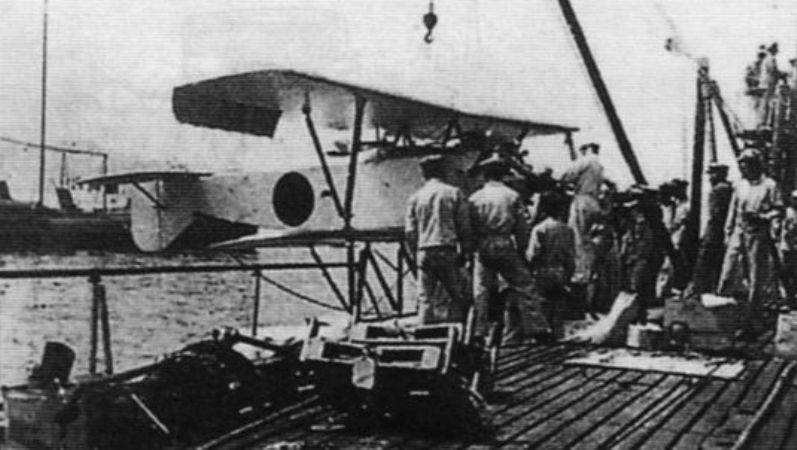 The first prototype of Yokoshi 2-Go is lifted with a special crane aboard the I-21 submarine.

Built in May 1929, the first 2-Go prototype passed the fleet for carrying out tests on the underwater mine layer I-21, which lasted until September 1931. Based on the test results, it was decided to put on a seaplane a more powerful seven-cylinder radial Japanese engine "Gasuden Jimpu" with a capacity of 160 horsepower. With the new power plant, the maximum speed of the Yokoshi 2-Go-Kai (the second prototype received the name) increased to 168 km per hour. The flight duration remained the same - 4 hours 24 minutes.

The design of 2-Go-Kai made small changes - the tail fin has acquired a more traditional form. Wing racks biplane received N-shaped view. The Yokoshi tests of the 2-Go-Kai took place first at the same I-21, and at the final stage on the I-52 submarine, which had a surface displacement of 1500 tons (underwater 2500 tons). At the end of 1931, the tests ended and were found to be satisfactory. 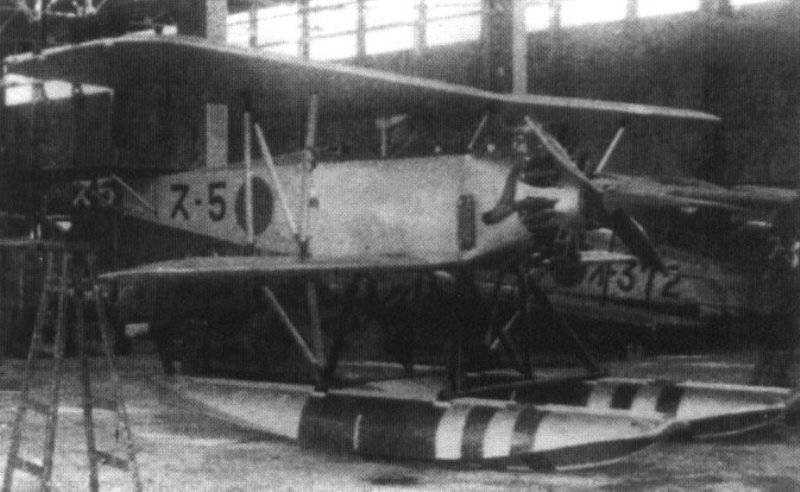 In 1932, a single float reconnaissance biplane under the designation "Yokoshi" E6Y1 (Type 91 model 1) was adopted. The fleet ordered a total of eight hydroplanes, which were built in 1933 – 1934 by Kavanishi (under the factory designation type N). Such a small number of ordered aircraft due to the weakness of the design, low flight performance and lack of weapons.

"Yokoshi" E6Y1 was the first serial reconnaissance seaplane to base on submarines. In the 1932 year, during the “Shanghai incident,” the E6Y1 (2-Go-Kai) seaplane performed several reconnaissance flights in the Shanghai area. In 1933, an experimental pneumatic catapult was installed on the I-52 submarine and the E6Y1 (2-Go-Kai) actively participated in its testing and fine-tuning. During 1937 – 1938, they were based on the I-5, I-6, I-7 and I-8 submarines, until they were replaced by the more advanced Watnabe E9W seaplanes. Flight Service "Yokoshi" E6Y1 ended in May 1943 year.

In 1932, the Aichi company commissioned the Chinese Navy to build a prototype of the Aichi AB-3 ship-based reconnaissance seaplane, similar in size and capabilities to the Yokoshi E6Y1. The plane had a folding outer wing console. The tests were successful, but no orders for mass production from China followed. The command of the Japanese fleet did not show interest in this development, since such a plane had already been put into service. 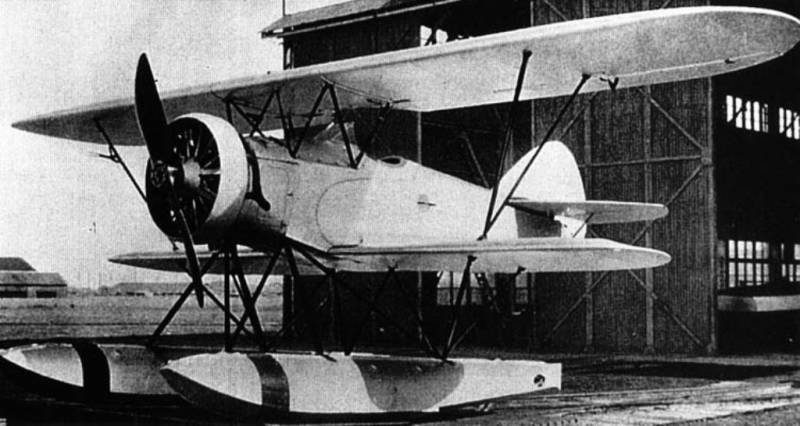 The prototype of the reconnaissance hydroplane "Aychi" AB-3, 1932 year 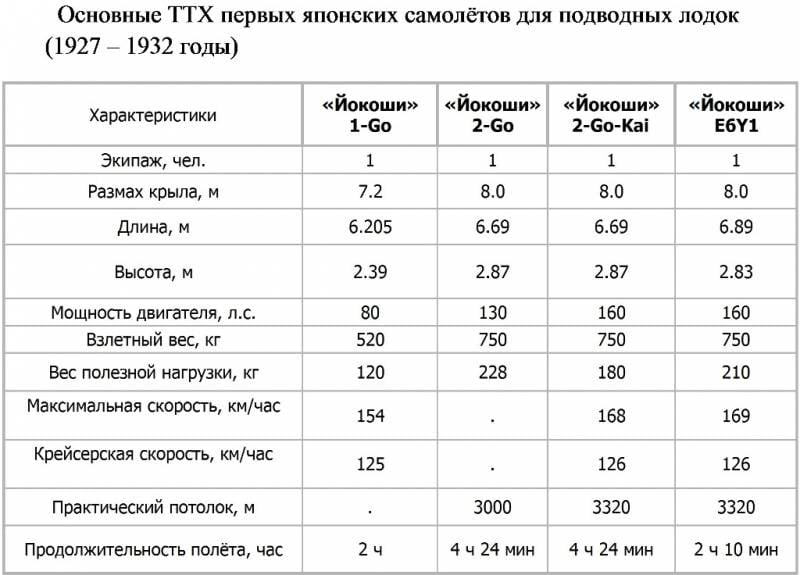