December 17 2017
3
The best anti-tank guns of the end of World War II were distinguished not only by high armor penetration, but also by the corresponding mass. To transport the guns, they needed separate tractors, which made their operation and combat use difficult. In 1943, the development of a new family of cannons deprived of this deficiency began in Germany. The third and last representative was Krupp Panzerabwehrwerfer 1000 or 10H64.


Recall the first low-pressure gun, which received the designation Panzerabwehrwerfer 600 and 8H63, was developed by Rheinmetall-Borsig. With a mass of about 640 kg, this tool was easily rolled by its own calculation. In addition, his projectiles pierced up to 143 mm of homogeneous armor at a distance of about 750. The gun with such characteristics interested the military, and therefore the 8H63 product soon entered service. From December 1944, the new type of serial guns in small quantities were supplied to the troops.

The test results of the Rhinemetal-Borsig gun were not only of interest to the military. Having learned about the development of a promising direction, Krupp decided to create its own project of a similar system. According to available data, its specialists planned to use already known and proven solutions, but at the same time provide a certain advantage over the competitor in the main combat characteristics. 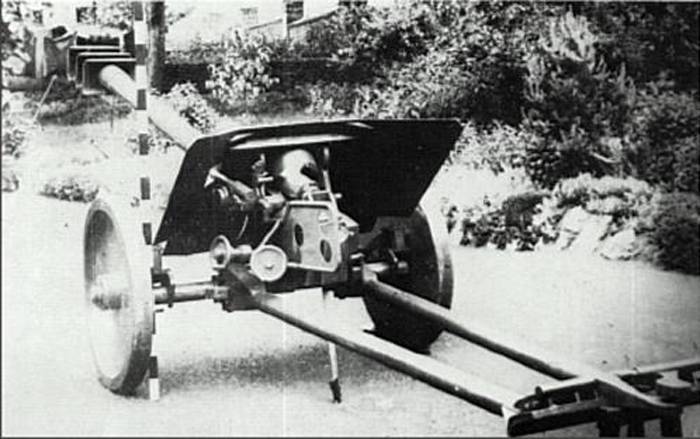 According to known data, the new project of the Krupp company received the working name Panzerabwehrwerfer 1000 (“Anti-tank launcher”). In connection with the introduction of new artillery designations, the promising gun should have been given the name 10 cm Panzerwurfkanone 10H64. Such a designation also classified an instrument as a launcher. It may be recalled that two guns from Rheinmetall-Borzig, according to their designations, were also considered as launchers.

The purpose of the two projects was to reduce the mass of the gun, which could facilitate the operation, including its use on the battlefield. It was proposed to solve this problem by reducing the pressure in the bore of the barrel or the Hoch-Niderdruk system. This concept implied a reduction in the wall thickness of the trunk, which led to a reduction in the mass of the entire product. In connection with the decrease in the strength of the stem, it was necessary to reduce the pressure in its channel. To obtain the required combat characteristics, it was proposed to use a new cumulative ammunition.

Krupp's PAW 1000 project envisaged gaining certain advantages over competing design from Rheinmetall-Borsig. To improve the performance in comparison with the existing product they proposed to increase the caliber of the gun. The use of 105-mm cumulative shells made it possible to significantly increase the armor penetration and effective firing range, but it did not lead to particular problems in terms of size and weight of the structure.

The details of the ammunition for the PAW 1000 gun, unfortunately, are not available. It is known that the first project of this kind - PAW 600 - provided for the development of an anti-tank projectile based on an existing mortar mine. It is possible that the gun from the Krupp had to use shots of a similar design. This assumption is indirectly confirmed by the fact that 105-mm mortars of several types were in service with Hitler Germany.

According to known data, the PAW 1000 cannon shell had to have a fixed tail stabilizer with a diameter of not more than 105 mm. The main body of the projectile was supposed to have a cumulative charge weighing 6,6 kg. Such a projectile could be used for firing at tanks at distances of up to 1000 m. When hit at a target with an angle of 60 °, the cumulative charge could penetrate up to 200 mm of armor. This means that the PAW 1000 / 10H64 gun, at least in theory, could hit any tanks of the armies of the anti-Hitler coalition.

From the point of view of the overall layout, the perspective tool differed little from other systems, including the “traditional” device. It was proposed to use one of the serial carriages with a wheel travel, on which, with the help of a support with the guidance mechanisms, it was necessary to establish a receiver group. In this case, any serious and noticeable differences from other guns were absent. The only characteristic feature recognized was only a large muzzle brake.

The carriage involved in the project was distinguished by its simplicity of design. The gun with the guidance mechanisms was fixed on a small platform mounted on the axle of the wheels. The platform also had hinges for sliding beds with coulters. The gun support device allowed a tip-off in the horizontal sector of width 60 °, and also provided firing with elevation angles from -5 ° to 30 °. Provided for the use of recoil devices lightweight design. The breech of the gun and the calculation were covered with an armored shield.

The gun received a smooth barrel caliber 105 mm, which had an average relative length. The barrel was completed with the original three-chamber muzzle brake of the active-reactive type. This device complemented the existing anti-recoil devices of the mast. The specific appearance of the brake was associated with low pressure in the bore. Less gas pressure reduced the impulse created by the brake and directed forward. As a result, any muzzle brake of a serial “traditional” cannon would show insufficient characteristics.

In the breech breech housed two chambers. The front was actually part of the barrel and was intended for the projectile. The second volume, which was behind it, was used to place the sleeve. The difference in the diameters of the two chambers was to ensure the correct operation of the gun. Also, the breech was completed with a semi-automatic wedge bolt and trigger.

To the left of the gun, a sight was fixed, which ensured firing both in direct fire and on mounted trajectories. Together with the gunner, the gunner had to use a pair of flywheels of the guidance drives, which were responsible for moving the barrel within a given sector. For the safety of the gunner to the left of the breech of the gun was placed a rectangular shield.

The use of a thin-walled barrel and lightweight carriage gave certain operational advantages. With a solid caliber and very high combat characteristics, the 10 gun cm Panzerwurfkanone 10H64 weighed only 1035 kg. Thus, the new type of gun was almost one and a half times lighter than the PAK 40 serial gun, but at the same time it was more armor penetrating at the same firing distances.

The project PAW 1000 provided an unusual way to disperse the projectile powder gases. The propellant charge was supposed to burn inside a cylindrical sleeve equipped with a metal cap. Upon reaching a predetermined pressure, the gases had to break through the membranes covering the openings of the lid, and only then could they get to the projectile. Due to the geometry of the two chambers and the parameters of the openings of the cover of the sleeve, the pressure in the barrel bore was several times less than in the sleeve. As a result, the requirements for the strength of the trunk were reduced. At the same time, pressure relief from the liner into the barrel bore provided a more uniform acceleration of the projectile.

According to reports, the Krupp 105-mm cannon could accelerate the projectile to speeds around 600 m / s. The effective range of destruction of armored vehicles with a cumulative projectile was determined in 750-1000 m. At this distance, the projectile punched at least 200 mm of homogeneous armor, depending on the angle of the meeting. Using a high-explosive fragmentation shot and the correct angle of elevation, the gun could attack the target at a range of 6200 m. In this case, there should have been a characteristic problem in the form of low accuracy. Aerodynamic stabilization of the projectile was insufficient, which could lead to a decrease in the effectiveness of the fire.

Not earlier than the end of 1944, Krupp completed the design work and began to produce an experimental low-pressure gun. Apparently, this product was soon withdrawn from the assembly shop and, perhaps, even went to the testing ground. There is some reason to believe that the Panzerabwehrwerfer 1000 / 10H64 gun passed at least some of the necessary checks and confirmed certain characteristics.

The results obtained during the tests allowed us to make plans for further serial production and practical use of new guns. First of all, the small mass and dimensions of the product made it possible to use it in field artillery. Parts of the anti-tank defense could get fairly simple to use, but at the same time highly efficient cannon. They planned to transfer serial guns on wheeled carriages.

In January 1945, a proposal appeared to use the PAW 1000 as part of a self-propelled artillery installation. By this time, Argus Motoren, in collaboration with several other organizations, had developed a project for the anti-tank self-propelled gun E-25. In the original version of this project, it was proposed to use the 75-mm long-barreled gun PAK 42. The emergence of an alternative tool from Krupp led to the corresponding proposal. The E-25 project should be reworked for a smaller, but more efficient, smooth-bore 105-mm gun.

According to various sources, tests of the PAW 1000 / 10H64 gun in the towed version were completed in the first months of the 1945 year. In the very near future, the command should have taken a final decision and adopted the gun, or abandoned it. If a promising project received the approval of the customer, mass production could soon start. Probably, towed systems would have left the conveyor first, and then E-25 self-propelled units could go to the army.

However, nothing happened. The Panzerabwehrwerfer 1000 project was launched at the end of 1944 of the year, and this fact has already seriously reduced its real prospects. The gun came to the test just a couple of months before the end of the war, and therefore had no future. Even if they did their best, the German industry would not have had time before the end of the war to give the troops a sufficient amount of such weapons. In this case, mass production did not begin at all. Krupp had other, more urgent tasks.

The future of the self-propelled project E-25 after the appearance of the proposal to use a new weapon was in question. It took time to rework an existing project under the 10H64 cannon. After completion of these works, it was necessary to build and test an experienced ACS, and only then it was possible to begin mass production. A few months remained before the defeat of Nazi Germany, and during this time the new self-propelled gun could not reach mass production. Moreover, the company Argus Motoren in the end failed to build even an experienced technique of a new type.

The prototype (or samples) of a promising anti-tank gun was destroyed under unexplained circumstances. Whether the experts from the winning countries could study it is unknown. Unfortunately, only one photo of the PAW 1000 product and a certain amount of information about it have been preserved.

Back in 1943, the German command, taking into account the current problems of anti-tank defense, proposed the creation of new types of artillery weapons. Until the end of the war, only three original guns were used, using the principles of low pressure in the barrel. One of them was brought to mass production, while the other two, differing in higher performance, did not leave the test stage. The only serial gun of this family showed good characteristics and could effectively fight with enemy tanks, but insufficient production rates did not allow realizing the full potential. The most interesting family of artillery guns could not have a noticeable effect on the course of the fighting and delay the defeat of Germany.