The defeat of carrier groups using X-32 and Zircon missiles 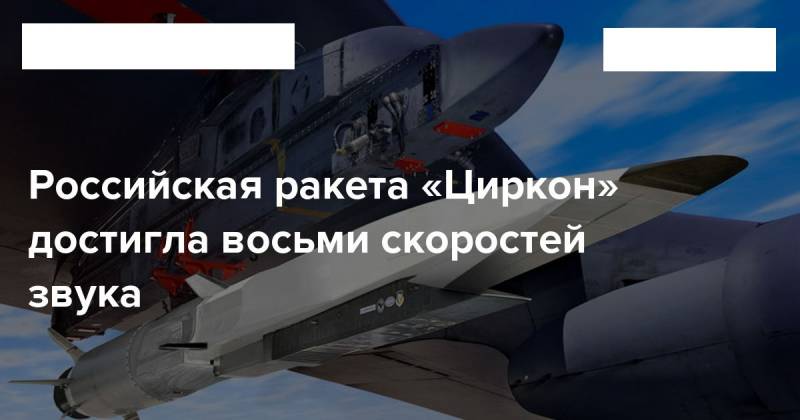 Today, the most realistic image of the “Zircon” is a snapshot of an experimental X-51A Waveraider.

It is the “Wavewider” photo under the wing of the carrier (B-52) that is given out in the domestic media for the newest hypersonic rocket of the Russian Navy. The editors are not confused by either the English-language primary source or even the presence of Air Force Research, Boeing and DARPA emblems on the side surface of the aircraft fuselage. However, as we have seen in the light of recent events, you can simply attach screenshots from the game. The main thing - entertainment. From solidarity to the workers of the pen and keyboard, the name of the source in which this misunderstanding was published had to be erased.

Unlike the superheroes of computer games, “Wavewider” exists on this side of the screen. The device was created in the framework of the concept of “fast global strike”, aimed at reducing the flight time of cruise missiles. Judging by the latest news programs, i.e. In silence for 5 years, the next “hypersonic experiment” went to the Air Force Museum.

In general, the X-51A project is somehow suspiciously stalled.

The reasons for the suspension of research can be guessed from the known difficulties associated with aerodynamic flights at speed 5M. The first on the list is the inevitable “thermal barrier”, ready to incinerate the brave souls who have challenged speed:

In its last flight, in May 2013, the “Wavewider” lasted on a hypersound for about six minutes, setting a record for hypersonic aircraft with ramjet engines. During this time, the model was able to develop a speed corresponding to the Mach number 5,1, and flew over the Pacific Ocean distance 426 km.

Why do I say “model”? Because “Wavewider” wasn’t even a prototype weapons in the usual meaning of the word. Its layout, in principle, excluded the presence of a warhead or guidance systems that are equipped with modern cruise missiles. Compact (length without accelerator - 4 m) radio-controlled model, resembling a chisel in shape. The only task of “Wavewider” was to dial 5M and hold on at this speed for at least a couple of minutes. 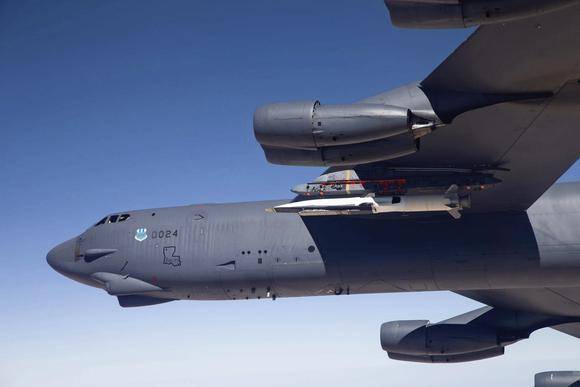 What is the obvious conclusion of the test results? Existing technologies are clearly not enough to translate into reality the tale of the “hypersonic weapon”.

Another well-known project, the baby “X-43”, quickly accelerated to nine speeds of sound due to the 20-ton solid fuel rocket “Pegasus”. After that, his own ramjet was launched.

After separation from the upper stage, the fiery extravaganza continued for as long as 11 seconds, and then the burnt fragments of X-43A fell into the ocean. Only two starts, the world speed record for LA in the atmosphere, incredible 9,6 M. At least a second for a dream!

The record remained a record. Judging by the 13-year break, the X-43 program has shown very great prospects.

Speed ​​up and go wild

That's all that allows modern technology in the field of hypersound.

We are talking about flights in the stratosphere at an altitude of 20-30 km using aerodynamic principles of flight. Those. when using bearing surfaces (wings) to create lift.

There are many technical means that develop hypersonic speeds in the upper atmosphere, at altitudes of 50 and more than km. All of them belong to the field of rocket technology.

At an altitude of 80 kilometers the atmospheric pressure is 100 000 times lower than that of the ground. This, to a certain extent, eliminates the danger of a “thermal barrier” when driving on a hypersound. On the other hand, it makes impossible the work of jet engines receiving an oxidizing agent from oncoming air flow. Moreover, even such high speeds are not capable of creating a lifting force in a rarefied environment.

In this case, only the ballistic trajectory. TRTR or two-component rocket engine.

However, 80 km - a clear bust. Based on the well-known test results of hypersonic LA equipped with ramjet, the maximum flight altitude for them is in the area of ​​30-35 km. At high altitudes, steady aerodynamic flight is practically unrealizable.

There are low-speed high-altitude aircraft with large wings: U-2, M-55 “Geophysics”, UAV “Zephyr”, capable of reaching altitudes 20 + km. As you may have guessed, the focus is due to the disproportionately large wing. But the wing area cannot grow forever. While increasing altitude, the density of the atmosphere continues to decrease exponentially.

But you can increase the speed of flight! What will lead? At an altitude of 100 km (Karman line), the speed required to create lift will exceed the first cosmic one. What makes the use of aerodynamics itself meaningless.

At an altitude of 30 km, the wings still cling to the discharged air. But there is a “thermal barrier” ahead, ready to burn the hypersonic aircraft in a matter of minutes.

But the wings melted into the heat,
And in the sea, forever blue,
Madman fell from a height.

Well, the introduction, as always, was delayed. Let's look at how the domestic project “Icarus” looks like against the background of foreign attempts to break through the speed barrier.

What is known today about “Zircon”?

1. Equipped with a starting accelerator and marching ramjet.

2. On tests, he was able to develop a speed corresponding to the Mach number 8, which by 60% exceeded the calculated speed 5M.

4. The missile is equipped with a warhead weighing 400 kg.

5. Mass-dimensions of “Zircon” correspond to КР “Caliber”, due to which storage and launching from the standard cell of the UCSC is ensured. 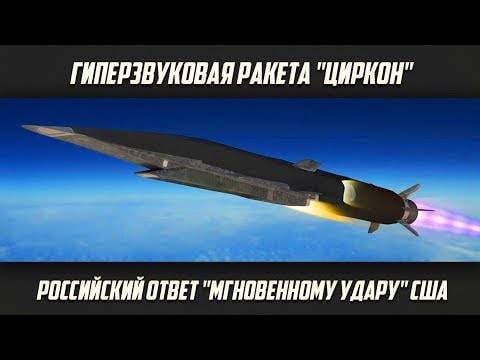 Information and entertainment format of the article prevents the emergence of any distant predictions and conclusions. The only thing that we can say at this stage: the claimed TTC of the “Zircon” to a large extent disagree with the published tests of Western LA of a similar purpose.

Against the background of the successes of “Zircon”, one can only wonder at the curvature and lack of talent of the designers of the Boeing and the Office of Perspective Projects (DARPA).

The starting mass of the X-51A Waverider (1814 kg “dry weight” + 120 kg of fuel) is approaching the upper mass boundary of the CR of the “Caliber” family.

With all this, “Wavewider” does not have a warhead. And it has a much lower flight speed.

Experimental hypersonic aircrafts are launched from the B-52 bomber at an altitude of 13 000 m at carrier speed 800-900 km / h. Under such conditions, at the moment of separation from the carrier, they possess a considerable reserve of potential and kinetic energy. That allows to reduce the power requirements (and, therefore, save on mass) of the accelerator accelerator. *

* The ramjet engine is inoperable on the dialup, so even when starting from the wing of a flying aircraft hypersonic rocket requires additional acceleration.

In contrast to foreign air-based KR, the “Zircon” is created to equip ships of the Navy. This means starting from the surface. And flying through the dense layers of air (75% of atmospheric mass is concentrated within 10 000 m).

Given these circumstances, the “Zircon” should have a much more massive starting accelerator.

For comparison: when creating a Bramos-A air-launched anti-ship missile system, due to the rejection of the launch accelerator, the launch mass of the rocket reduced by 500 kg (2,5 tons versus 3 tons in the ship-based version).

In general, as I said, I do not intend to make any loud conclusions. In my personal conviction, the stated characteristics of the Zircon in the form of a compact 6 fly-up cruise missile with a ramjet engine are far from reality. The developers of Zircon (NPO Mashinostroeniya) also do not comment on the development of the advanced RCC and, despite international interest and media hype, have not even presented its layout yet.

To date, the “Zircon” flies only in the media space, burning enemy aircraft carriers and carrier fleets. At that time, while “Khibiny” are burning out the electronic filling of the destroyers.

Today's story will not be complete without the X-32 rocket. Briefly her история (from the media point of view) is as follows.

In 1968, the “stupid” creators of the X-22 RCC, set the maximum height of its flight at the level of 20-25 km. Modern “smart” designers took and launched exactly the same rocket to a height of 40-45 km. That's right, because why fly low, if you can fly twice as high.

The ceiling was doubled, without making any changes to the aerodynamic shape of the anti-ship missile: the same fuselage, the same wing, there are no external differences.

To increase the degree of intrigue, the air pressure at 42 km altitude is 17 times lower than at 22 km altitude. 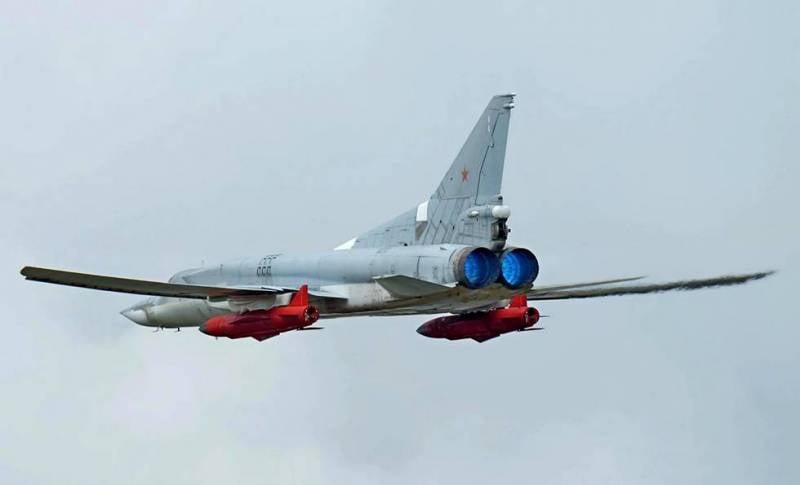 The solution to this problem is that the real flight profile of the X-32 differs markedly from the generally accepted fairy tale (or science fiction, as you like). By reducing the mass of the warhead and increasing the fuel reserves, as well as making changes to the rocket engine (the details are classified), it became possible to increase the maximum flight altitude on the ballistic curve from 22 to 40 km.

This flight profile is not very attractive when overcoming air defense / missile defense of ship-borne units. At a maximum height, the rocket is just one instant, followed by the inevitable decline along a quasi-ballistic curve. Those. most of the flight time, X-32, like its predecessor, is in the zone of destruction of the ship-based air defense system.

Let's better evaluate the results of hitting the Zircon on the flight deck of the newest aircraft carrier of the Gerald Ford class: 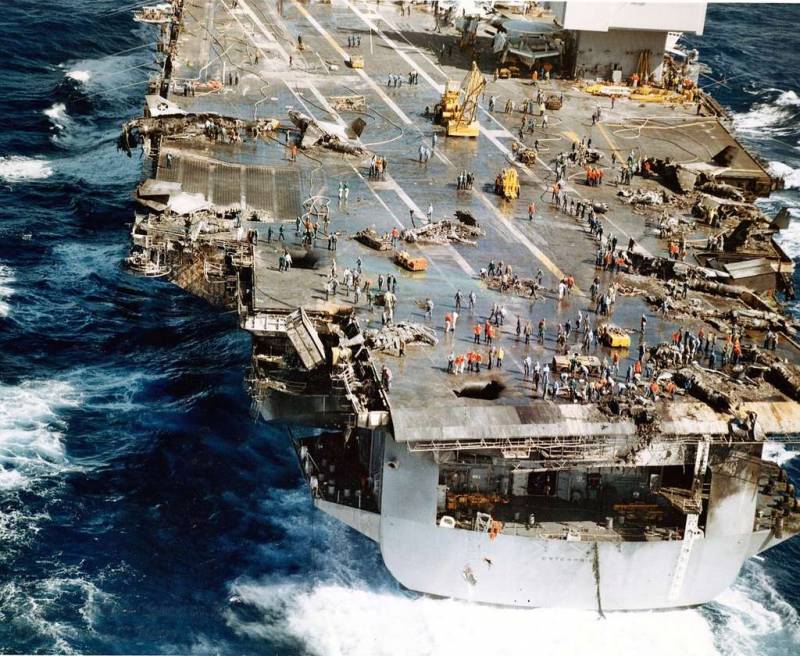 Ctrl Enter
Noticed oshЫbku Highlight text and press. Ctrl + Enter
We are
War Is Boring: “Imagine that almost all Russian ships carry hypersonic rockets”Hypersonic fuss: in pursuit of speed
194 comments
Information
Dear reader, to leave comments on the publication, you must to register.