December 1 2017
41
As part of the international conference held in Moscow in mid-October armory at the Arms & Hunting 2017 exhibition, the Russian company Novo-Obninsk-import in collaboration with the Automated Systems of Kaluga (ASIKA) company presented a number of new products. At the stands of the companies one could observe a compact folding self-loading carbine chambered for a pistol cartridge 9x19 mm (Luger) under the working name ASK-17-9. This model is the Russian interpretation of the American Kelt-Tec SUB-2000 carbine. The new carbine was not announced before the exhibition, but managed to interest visitors, the public showed genuine interest in the new product.


Kelt-Tec SUB-2000 was developed in the USA in 2000 and is manufactured by CNC Industries. This model was rejected by the American military because of its very original appearance and design. After that, the Americans began to position their compact folding carbine under a pistol cartridge as a companion weapon for those people who travel a lot and fear for their lives, but do not want to burden themselves with heavier small arms - hunting carbines and rifles.

Kelt-Tec SUB-2000
Apparently, the creators of ASK-17-9 are aimed at the same niche. The main purpose of such a carbine is the self-defense of tourists and hunters from various threats from both wild animals and uninvited guests (bandits). True, professional hunters doubt the effectiveness of such weapons and a pistol bullet in the event of an unexpected meeting, for example, with a bear. Also, the carbine can be used as a weapon for plinking - an entertaining type of shooting at various non-standard targets (beer cans, bottles). However, plinking is typical primarily for countries with liberal arms legislation, to which Russia definitely does not belong; for the same purposes, Russia often uses conventional pneumatics. Do not forget that ASK-17-9 is a rifled firearm, and the circle of persons licensed for long-barreled rifled weapons is extremely limited. According to the participants of the Arms & Hunting 2017 exhibition, the cost of the ASK-17-9 self-loading compact folding carbine was indicated at about 50 thousand rubles, which is cheaper than the American Kelt-Tec SUB-2000, which was offered at a price of 60 thousand rubles.

The American self-loading karabiner Kelt-Tec SUB-2000 was created in 2000 by George Kellgren, an American of Swiss origin who is the president and chief designer of Kel-tec CNC Industries. The development was based on the early development of the same company - Kel-tec SUB9 carbine, created in 1997 year, but turned out to be quite expensive to manufacture. With the Kelt-Tec SUB-2000 carbine, the company hoped to occupy the “expeditionary” weapon niche. Companion weapons for those people who are forced to travel quite a lot by car or on foot, in the first place - this is a weapon of self-defense, as well as a weapon for entertaining shooting and training. As an option, hunting for medium-sized animals at close distances was also allowed.

ASK-17-9, photo: nobninsk.ru
The Kelt-Tec SUB-2000 carabiner under the pistol cartridge turned out to be very compact, the barrel length was only 41 centimeter (fitted to the peculiarities of the American legislation), in the unfolded state the length of the carbine did not exceed 75 centimeters. At the same time, the mass of weapons did not exceed 1,8 kg. The Russian version of the ACK-17-9 with large dimensions (the length of the barrel and weapons) has a smaller mass. Due to the use of moderate-capacity pistol cartridge 9x19 mm and Kelt-Tec SUB-2000, and its Russian analogue ASK-17-9 have a simple design, low weight and recoil. This, combined with compactness and decent store capacity, makes them good civilian weapons.

The Kel-tec SUB2000 self-loading compact carbine used automatics with a free shutter, shooting from a weapon is conducted from a closed bolt. The recoil spring and the bolt are in an aluminum tube that serves as the base of the butt. The bolt handle is located at the bottom of the stock tube, behind the pistol grip. The carbine was used trigger mechanism trigger type, single action. At the same time, the platoon effort was made minimal, which provides the model with a very high rate of fire for non-automatic weapons - up to 150 rounds per minute (the same is stated for ASK-17-9). Manual fuse has the form of a transverse button, it was located above the pistol grip. The power supply of the weapon is carried out from detachable box magazines inserted into the handle of the weapon. The receiver and pistol grip were made of impact-resistant plastic.

ASK-17-9, photo: nobninsk.ru
The main feature of the model was that it is easily folded. Kel-tec SUB2000 was very easy to fold and fold again. In order to lay down their weapons in the stowed position, the carbine “broke through” in the area of ​​the official section of the trunk around the axis, which is located at the base of the rear sight. The barrel latch served as a mobile trigger guard. Moreover, if you suddenly fold the carbine, when there is a cartridge in its chamber, since the barrel will be in one part and the bolt in the other, the cartridge will simply fall out of the weapon.

It should be noted that the Novo-Obninsk-import company announced a compact folding self-loading carbine Kelt-Tec SUB-2000 in caliber 9x19 mm as part of the Arms & Hunting 2013 exhibition, four years later, and the company presented its Russian version at an exhibition in Moscow. The weight of the presented prototype of the Russian ASK-17-9 carbine is only 1,2 kg, while the length of the weapon in the unfolded form is 850 mm, in the assembled carbine is almost half shorter, the barrel length is 510 mm. 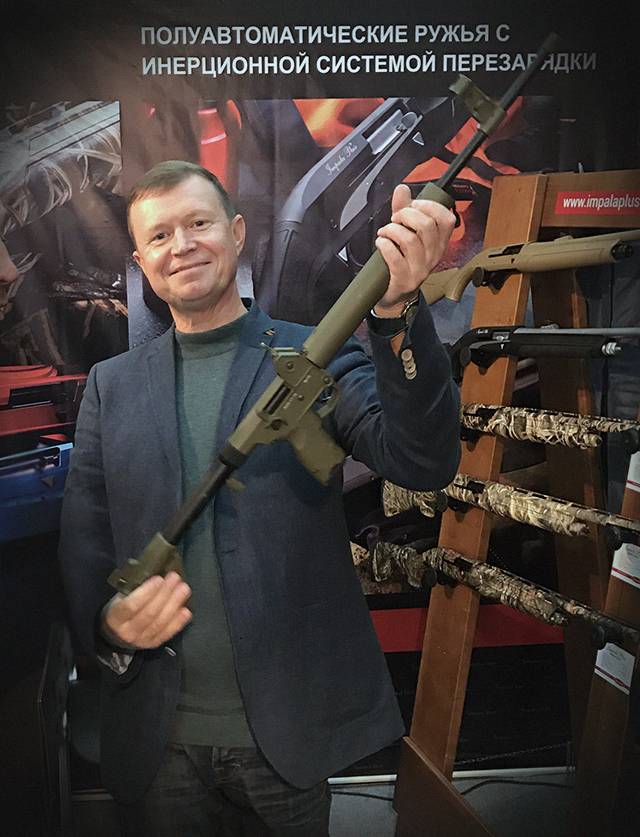 ASK-17-9, photo: nobninsk.ru
The work of the ASK-17-9 carbine is also based on the free course of the shutter, the return spring and the shutter handle are in the butt of a tubular type, which is made of aluminum alloy. The capacity of the magazine located in the pistol grip of the carabiner is 10 cartridges (standard box magazines from the popular Glock-17 pistol are used), the cartridges are 9x19 mm Luger (also the name Parabellum is common). The main difference between the Russian system, which is made in Kaluga, is the receiver and pistol grip, which are made of aluminum alloy, and not of impact-resistant plastic, like the American design.

The rate of fire of the presented compact carbine is the same 150 shots per minute, the declared target range is up to 150 meters. For aiming the carbine is equipped with an adjustable diopter front sight. Like the Kelt-Tec SUB-2000, the Russian model easily folds. It has a transverse axis above the breech breech, which allows the trunk to be folded up and back 180 degrees in the stowed position, placing it on top of the receiver and the tubular butt. The folding barrel lock is controlled by a movable trigger guard.