News of the program "Warrior": details of trial operation

November 29 2017
44
In 2011, the Russian defense industry for the first time unveiled the Ratnik military equipment kit (KBEV). After carrying out a number of necessary checks, the kit received military approval and entered mass production. Every year, the army receives several tens of thousands of such kits. Over the past few years, the military and industry experts conducted the necessary tests, in which various information was collected about the kit as a whole and its individual components. Now some details of the checks are known.


Not so long ago, the newspaper of the Ministry of Defense "Krasnaya Zvezda" began publishing a series of articles written by Yuri Avdeev on the state and prospects of the KBEV "Ratnik". So, on November 19 was published the material “Warrior” with an eye to the future. ” Exactly a week later, the article “Digitized“ Warrior ”was published, continuing the story about the latest domestic developments. Apparently, in the very near future, the cycle will continue with a new article, but already published publications are of great interest. Consider the published data about the "Warrior". 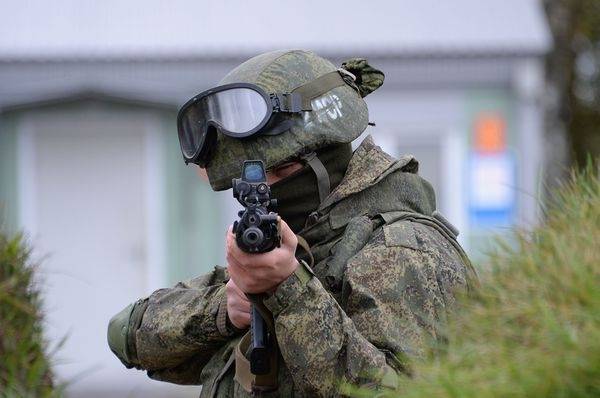 In the first article - “Warrior” with an eye to the future ”- it was noted that some of the components of the perspective equipment had already been accepted for the supply of the armed forces. At the same time, the testing of new products and the development of the whole complex does not stop. Simultaneously with the improvement of already existing components of the “Warrior”, new projects of one kind or another are being developed. The goals of the current work are defined, and now the specialists are working on solving the current tasks.

In general, the “Warrior” project provides for the creation of a promising innovation system that has life support functions and increases the efficiency of solving combat missions. Currently, the industry is engaged in the creation and improvement of individual instrumentation equipment. Communication, navigation, targeting, etc. controls have a special priority. A modular approach to building equipment is also actively used.

As repeatedly stated earlier, all the means of the “Warrior” are summarized in five basic systems. A set of combat equipment includes a system of destruction, protection, life support, control and power supply. In this case, the composition of individual systems may vary in accordance with certain requirements.

In March 2015 of the year, it was decided to launch the controlled operation of KBEV Ratnik. During the execution of this instruction, special groups for the collection, processing and analysis of information were organized in the troops. The control units of different types of troops operate the “Warrior” kits, and also interact with information gathering groups. The operation of both the entire complex and its individual elements is being studied. According to the results of the exploitation analysis, the industry receives certain instructions concerning the further development of systems.

The article "Digitized" Warrior "indicates that the control groups of military personnel are almost fully equipped with products of the promising KBEV. So, the fighters used body armor like 6B45 with modular transport system, armor 6B47, camouflage set 6Ш122, joint protection kit, patrol satchel, gas mask with bag, etc. Similar products were used by fighters as part of tactical, physical, fire and engineering training. The servicemen also checked the compatibility of the “Warrior” kits with existing vehicles and combat vehicles.

It is indicated that the initial level of training of control units was the same. They practiced by the same methods; tactical conditions and instructions for solving the tasks set were also not different. The skills and abilities of the fighters were tested using both existing and advanced equipment. This made it possible to compare the results and draw conclusions about the characteristics of the KBEV “Warrior”. As part of pilot operation, the control units worked using new systems for about 500 hours.

Interesting results were obtained in the study of the defeat system, which is part of the "Warrior". During trial operation, the specialists compared two pairs of automata. These were products AK-12 and 6P67 chambered for 5,45х39 mm, as well as 7,62-mm assault rifles AK-15 and 6P68. Machines were compared with each other, and with the standard armament of the army. Study of weapons carried out on the basis of motorized rifle divisions, marines and airborne troops.

A comparison of automata showed that AK-12 and 6P67 products have both advantages and disadvantages. At distances up to 300, the 6P67 submachine gun shows 1,1 times greater fire efficiency. At distances over 300 m, the AK-12 submachine gun shows superiority. At the same time, the advanced weapons were compared with the standard AK-74M machine gun. AK-12 and AK-15 products showed a twofold superiority, and the efficiency of the 6P67 fire is higher by 2,3.

AK-74M machines were tested both in the initial configuration and with a set of additional equipment, formed in the framework of the Aves design work. Thanks to additional devices, shooting accuracy improved 1,3 times in comparison with the base machine. At the same time, some problems arose in the context of weapons service. Thus, the incomplete disassembly of the AK-74M with a “body kit” takes on average 47,5 seconds, whereas the initial automaton can be disassembled in 12,1 seconds. Assembling a weapon from such a state takes 18,6 with (basic AK-74М) or 84 with (“body kit”). According to the results of testing the results of the ROC Obves, the industry received some recommendations. At the beginning of 2017, she presented an updated version of the machine with additional equipment.

Along with the weapons tested means of observation and aiming. These works were carried out in four stages. The first two were to issue products to the personnel, followed by their study and assignment to the soldiers. The third stage provided for the training of personnel in the light and dark hours of the day. As part of the final stage of testing, experiments were conducted that involved changing the quantitative composition of the sighting devices in the subunit.

It is reported that the use of "Warrior" leads to positive results in some areas and to inconvenience in others. Thus, it was determined that the new equipment does not adversely affect the results of the fighters in the context of fire training. In addition, there is an increase in indicators in tactical training. Soldiers get the opportunity to quickly deal with their combat mission.

At the same time, the presence of a large number of various means leads to an increase in the mass and volume of a soldier in full gear. This adversely affects the usability. Embarking and disembarking a combat vehicle takes 2,3 times as much time, and the grenade throw distance is reduced by 3-7 m.

As already mentioned, the experts of the 3 Central Research Institute of the Ministry of Defense performed mathematical modeling and determined the increase in combat effectiveness. It was found that when equipping the reinforced battalion of the ground forces of the KBEV “Warrior”, losses are reduced by 12%. Ammunition consumption increases by 5%. The enemy has the opportunity to penetrate into our positions to a depth of no more than 50-200 m, and in some situations his progress is excluded. It was also determined that in a dueling firefight, the number of targets hit grows.

"Red Star" also reveals the plans of the Ministry of Defense for the last months of this year. Before the start of 2018, it was supposed to complete the control operation of a number of new devices. It was about new means of intelligence, observation and aiming. In addition, several prospective sniper rifles should be completed in the near future. These are products of SVDM, VSSM and ASVKM. After all this, the Ministry of Defense will gather a coordination and scientific council, which is to discuss the results of the latest tests.

The final of the program of tests and inspections will be the development of new proposals that will be used in the course of further work. New proposals and refined requirements will be taken into account in subsequent development work, the purpose of which is to create a promising complete set of combat equipment of a soldier under the code "Warrior-3". This work will continue over the next few years.

Deliveries of the “Warrior” kits of the existing modifications started a few years ago. Since then, a number of defense industry organizations involved in the program have created a full set of necessary equipment, and also carried out several upgrades to individual products. All the main components of KBRA "Warrior" are in mass production and in large quantities are supplied to the armed forces. 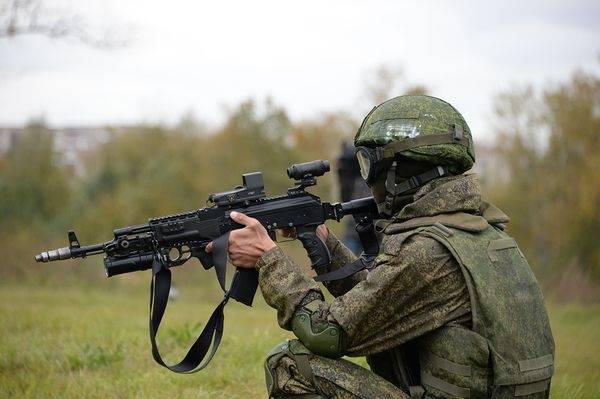 According to previously published data, in the 2014-15 years, the army handed over more than 70 thousand sets of "Warrior" with all the necessary equipment and products. Later, representatives of the military department noted that annually the armed forces will receive 50 thousand sets. At the same time, the possibility of increasing rates with a noticeable increase in supply volumes was not excluded. In parallel with the procurement of new equipment, the military department conducted various tests on the basis of combatant units. Based on the audit results, recommendations were made regarding the further development of the tested systems. In addition, preparations were made to create a new generation of the kit.

At present, specialists from a number of organizations of the Ministry of Defense are completing ongoing tests of the KBEV “Warrior” in the existing configuration with an up-to-date set of equipment, weapons, protection and electronic equipment. In the course of such tests, it is planned not only to reveal the real characteristics and capabilities of the systems, but also to determine the further development paths of the kit. New recommendations, which should appear in the near future, will be taken into account in promising projects of the program "Warrior-3".

Earlier it was claimed that the next “generation” of the “Warrior” kit will appear at the end of the current or the beginning of the next decade. It will have certain advantages over existing systems, achieved through the use of updated tools and components. When creating new products will be taken into account operating experience and testing of existing ones.

The kit of combat equipment of a soldier “Warrior” includes several dozen products of different classes and different purposes. All of them are reduced to five systems responsible for solving various tasks of a combat or auxiliary character. The components of the kit, shortly after their appearance, passed the necessary tests, after which they were recommended for introduction into the “Warrior”. Then, after the appearance of a complete set, tests started, in which all products are studied together, during their full use.

Joint tests of the CBEV assembly allow for the timely identification of certain problems with the interaction of components, as well as to identify and note the positive qualities of the products. Thus, according to the results of all current work, the army will be able to receive a complete set of equipment that fully complies with current requirements. In addition, current work predetermines the course of promising projects, the creation of which will start in the near future.

It is important that the military department in the person of official representatives and its own newspaper regularly announces certain results of various works, including the “Warrior” program. Thanks to this, those interested get food for thought, and society as a whole is another reason to be proud of their armed forces.