November 28 2017
21
In 1949, the US Air Force received a small-caliber collapsible rifle, the M4 Survival Rifle, which was proposed as a hunting rifle. weapons and means of self-defense for pilots in distress. In 1952, the pilots received a similar system M6 Survival Weapon. The development of the original idea was continued, and a few years later an order appeared to adopt the MA-1 Survival Rifle rifle.


At the beginning of the 1950s, the M6 combined rifle, which had sleek and rifled barrels, was built upon the order of the USAF. Depending on the type of game, the downed pilot could use an .22 Hornet cartridge with a bullet or a shotgun M35 caliber .410. The gun could be folded and occupied the minimum place in a portable emergency reserve. The M6 Survival Weapon product differed from its predecessor in enhanced performance and other capabilities, but the army soon found it necessary to create a new, similar sample.

One of the experienced rifles ArmaLite MA-1

Just two years after adopting the M6 rifle, the command of the air force ordered the development of a new survival weapon. The corresponding contract was obtained by the newly founded company ArmaLite, at that time it was a structural unit of the aircraft manufacturer firm Fairchild Aircraft. The technical assignment for a new weapon was similar to the previous ones. The contractor had to create a light and compact magazine rifle for an existing small-caliber cartridge.

Initially, the project of a perspective rifle received the working designation AR-5, which corresponded to the internal nomenclature of the developer company. Later, in the 1956 year, according to the test results, the rifle was put into service, with the result that it received a new name - MA-1 Survival Rifle (“Survival Rifle MA-1”).

Taking into account the basic requirements of the customer, the engineers of ArmaLite, headed by Eugene Stoner, proposed a fairly simple rifle design. The AR-5 project involved the use of a number of simple and mastered solutions, complemented by several new ideas. In particular, it was planned to make a collapsible rifle, which allowed to reduce its dimensions in the transport position. In addition, the weapon had to have a special butt, allowing to do without separate bags or carrying cases.

ArmaLite AR-5 rifle had the most simple layout. In the center of the product was a compact receiver with a bolt group and a trigger mechanism. Her front end had attachments to mount the barrel, and a plastic butt joined to her back. In the combat position, the rifle was distinguished by sufficiently large dimensions, but in the transport configuration it was compact and lightweight.

Part of the main parts of the weapon was placed in the receiver with recognizable external contours. Interestingly, subsequently, stem boxes of a similar shape were used in new projects by J. Stoner. To accommodate the shutter was intended the upper part of the box, made in the form of a cylinder of the required diameter. In the right side of the cylinder there was a window for ejection of liners. Behind him, an L-shaped groove for the bolt handle was provided. From below, a rectangular casing was attached to the cylinder, the front part of which contained the receiving shaft of the store, and the rear one was used to install parts of the firing mechanism.

To improve performance, it was proposed to use materials resistant to corrosion. The main parts of the weapon were made of stainless steel or aluminum, and the butt with the back plate should be made of plastic and rubber. 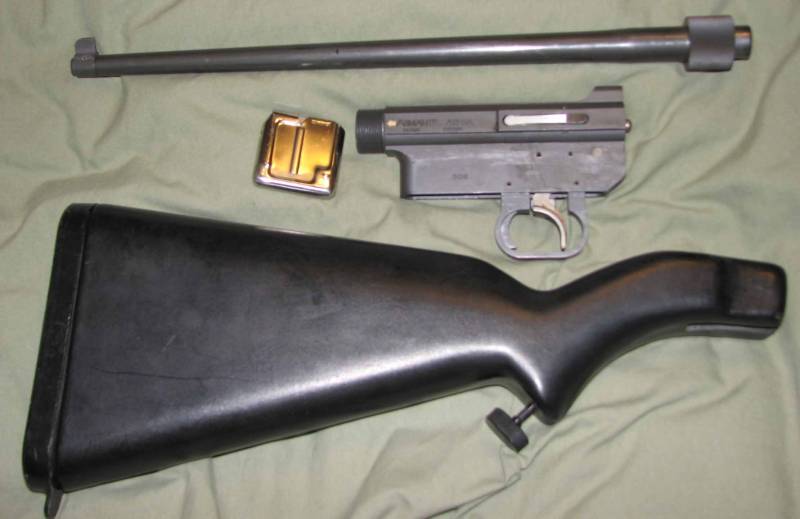 The rifle received a rifled barrel caliber 5,7 mm for a small-caliber central ignition cartridge .22 Hornet (5,7х35 mm R). The barrel had a length of 14 inches (mm 355) or 62 caliber. The thickness of the walls of the trunk decreased in the direction of the muzzle. In the muzzle of the barrel there was a collar with a front sight, the breech got a nut for fastening on the front of the receiver. To reduce the size and weight of the weapon, the barrel had no protection.

The AR-5 / MA-1 rifle received the simplest sliding bolt with turn locking. The bolt group performed in the form of a cylindrical unit, freely moving inside the receiver. To control the movement of the shutter was proposed using a curved handle in the back. Before the shot, the barrel was locked using several lugs. Inside the gate there was a moving drummer and an extractor.

A simple trigger type trigger mechanism was used. Fire control was carried out using a traditional trigger, derived under the receiver. Security provided by a fuse blocking the work of USM. His lever was placed in the back of the receiver, directly above the upper cut of the butt.

The rifle from ArmaLite was supposed to use a small-caliber .22 Hornet cartridge. For the storage and supply of such ammunition in weapons was developed a compact box magazine with four cartridges. The store was placed in the reception shaft of the front location and was fixed with a latch. It is curious that the control lever of the latter was located on the front of the guard - just before the trigger. 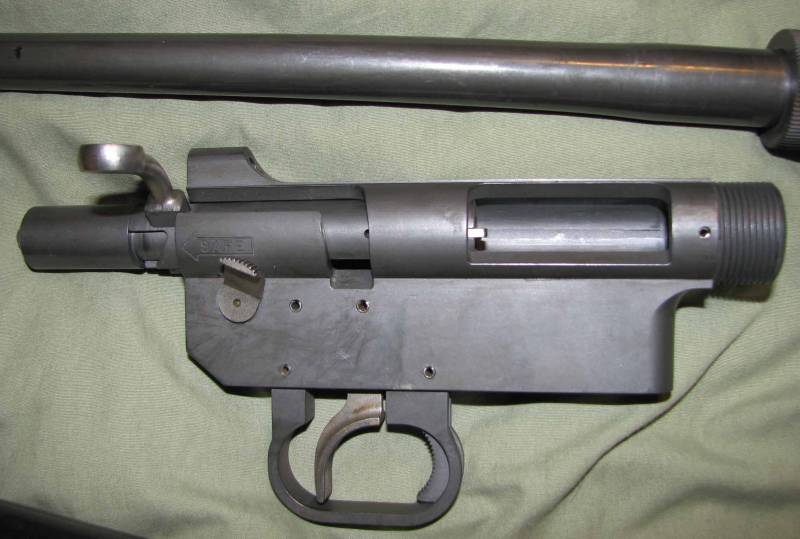 Of particular interest is a butt designed specifically for a survival rifle. For greater convenience of holding weapons and firing, it was proposed to use the traditional form of a butt with a pistol protrusion on the neck. At the same time, J. Stoner and colleagues envisioned several interesting innovations that simplified transportation and storage of the rifle.

Plastic butt had a U-shaped in terms of the front of the neck, covering the receiver. A long screw passed through the internal canal of the neck, which is necessary for assembling a rifle before firing. It was proposed to rotate this screw with the help of a large cap placed under the pistol projection. Inside the butt provided a couple of large compartments. The first was made in the form of a tube and differed a great length. The second had increased size, but went to a lesser depth. The first compartment was designed to store the trunk, the second - for the receiver with the store. Both compartments were covered with a removable rubber butt pad.

The low-power cartridge and limited firing characteristics made it possible to get by with the simplest sights. An unregulated fly was placed on the muzzle of the trunk. In the back of the receiver there was a small upper ridge, inside which there was a rear sight with a ring. 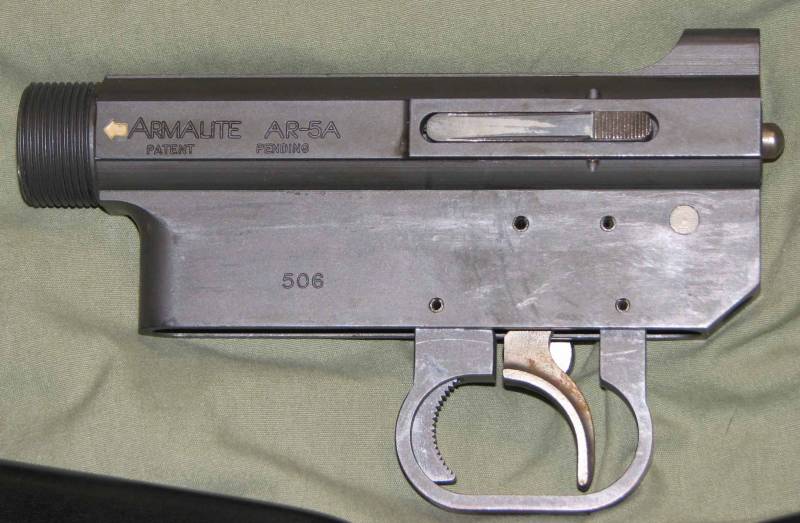 Left view of the same units

The AR-5 / MA-1 rifle should be stored in a disassembled state. In this case, the barrel and receiver were located in a sealed butt. It is curious that the light butt with large cavities filled with air had a positive buoyancy and could hold on to water. In addition, he protected metal parts from external influences.

When folded, the survival rifle had a total length of 368 mm with a height of no more than 150 mm and a width of several centimeters. The size of the weapon in such a state was determined solely by the dimensions of the stock. In the form assembled and ready for shooting, the AR-5 had a length of 806 mm. The mass of weapons, regardless of the current state, was only 1,2 kg. A medium-power cartridge (muzzle energy of no more than 1100 J) did not give a strong recoil, but allowed to shoot at small and medium game at distances to 150 m.

In preparation for the hunt, the downed pilot had to remove the butt plate from the butt and remove the weapon assemblies from it. The receiver was inserted into the front slot of the butt and was fixed in place with a screw passing through the neck. The barrel was connected to the box with a large cap nut. After completing the assembly, the shooter could install a magazine, raise a weapon and make a shot at game.

Prototypes of a new rifle for the air force were manufactured and submitted for testing in the 1955 year. They successfully coped with all the checks, with the result that next year a new command order appeared. Well-proven weapons adopted by the US Air Force. The order of adoption also introduced a new official designation - MA-1 Survival Rifle. In the near future, the first order for mass production of rifles was to appear.

ArmaLite has begun preparations for the release of new survival rifles, but further preparatory work has not gone. After the adoption of the MA-1, it became clear that the air forces simply do not have the financial ability to order a significant amount of new weapons. Responsible persons tried to find funding for such purchases, but did not succeed in this. The result was a very strange situation. The survival rifle met all the requirements and was put into service, but the customer did not purchase a single serial product. This situation persisted for some time, after which the military department notified the rifle developer of the impossibility of signing a contract for the purchase of mass-produced items.

According to some reports, the company ArmaLite by this time managed to make plans for the near future. According to them, the Pentagon was to be the launch customer for the AR-5 / MA-1 rifle. Further it was supposed to continue the release of weapons, but for other customers, including for the withdrawal to the civilian market. However, the absence of the expected order of the military did not allow to fulfill all these plans. An interesting rifle at first could not get into military units, and then she could not get to the shelves.

The developers, not without reason, considered their survival rifle a successful model of small arms, designed to occupy a specific niche. However, the lack of state order forced them to abandon a good project. Shortly after the army finally abandoned the purchase of the MA-1 series rifles, ArmaLite found an elegant way out. Based on the existing product AR-5, a new sample of a different class was created.

Cavities in the butt: left for the barrel, right for the receiver

The rifle, originally intended for the US Air Force, was noticeably redone. While preserving the basic layout decisions and some elements of the design, the new weapon received automatic equipment, due to which it became the category of self-loading rifles. In 1958, a new rifle was introduced to the market under the commercial designation AR-7. Unlike its predecessor with manual reloading, the new rifle was able to go into series and remained in operation for a long time. In addition, she even managed to get into service with one of the countries.

ArmaLite’s special weapons failed to reach mass production and use in the military. As a result, it was not possible to test it in real or close to real conditions. Taking into account the peculiarities of operating previous survival systems, it can be assumed that with the help of MA-1 a downed pilot could successfully hunt small game and wait for rescuers with less problems. However, low-power cartridge and manual reloading would hardly have helped the pilot to fight off the attacking enemy.

The AR-5 / MA-1 Survival Rifle survival rifle was originally designed for use by pilots who had to wait for help. This requirement in the most noticeable way influenced the design of the weapon, and also affected some of its characteristics. All the engineering tasks were successfully solved, and the rifle was put into service. However, financial difficulties led to a specific finale. The order for rifles did not follow, and the development company had to rework the project to meet the requirements of the civilian market. And the already revised version of the rifle could not only interest buyers, but also reach full and long-term operation.