November 25 2017
9
Protecting the world is a truly significant and outstanding profession. Its importance is determined on the basis of the main request of civilization - security and development. There is no security - and development, in its essence, is impossible. In turn, there is no development - security problems may well arise. To perform the function of providing security outside the country, the peacekeeping contingent is responsible, which receives an appropriate international mandate, including a mandate at the level of regional agreements. 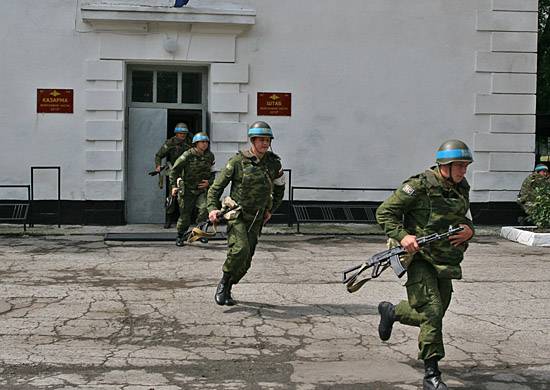 Historical The holiday is dispatched by November 25, 1973 - the day when the first group of Soviet officers, consisting of 36 people, arrived in Egypt to participate in the settlement of the flared Arab-Israeli crisis. Soviet peacekeepers were officially included in the mission of the United Nations. The military personnel of the USSR Armed Forces were involved in a group of observers observing the ceasefire in the Suez Canal area, as well as in the Golan Heights.

Witnesses to the dispatch of the first Soviet peacekeeping contingent within the UN mission abroad suggest that the Soviet Union approached the choice with particular responsibility. The selection of officers was carried out from half a thousand applicants. We chose according to a number of criteria, including not only “difference in military and political”, but also knowledge of a foreign language. In the first place, preference was given to servicemen fluent in Arabic.

After 1973, the boundaries for deploying domestic peacekeepers have expanded. These are missions in Lebanon, Cambodia, Sierra Leone, Sudan, Angola, Democratic Republic of Congo, etc. After the collapse of the USSR, Russian peacekeepers took part in international missions in the republics of the former Yugoslavia, Georgia, and Tajikistan.

For a quarter of a century already, Russian servicemen have been ensuring peace on the banks of the Dniester. Despite all the attempts of individual Moldovan politicians to squeeze out the Russian contingent from Transnistria, the military men of the Armed Forces of the Russian Armed Forces take up their positions with that sole purpose - to prevent war on the Dniester again. Unfortunately, the Russian peacekeepers, like all the people of the Pridnestrovskaia Moldavskaia Respublika, today are virtually in a blockade. In order to carry out the rotation, to deliver everything necessary to the peacekeeping base, every time you have to go to the real political battles - so that the battles will not end up in the military. Obviously, there are still a lot of hotheads in Chisinau, who still believe that the crisis can be overcome by a “small victorious war” against Transnistria.

Russian peacekeepers kept the peace in Transcaucasia. In 1992, the mixed peacekeeping forces contributed to ending the Georgian-Ossetian conflict on the territory of South Ossetia. At that time, Russian peacekeepers had to make a lot of efforts to preserve the mechanism of mixed peacekeeping forces in the zone of military confrontation. The reason for the obvious difficulties of the Russian mission in Georgia was the fact that the Georgian contingent carried out frank efforts to discredit the peacekeepers of the MC of the armed forces of Russia. Official Tbilisi did everything to expose the Russian servicemen as persons “violating international law with their presence in South Ossetia”. In what it turned out in the end, everyone remembers.

By personal order of the Supreme Commander-in-Chief of the Georgian Armed Forces, President Mikhail Saakashvili 8 August 2008, the Georgian troops attacked not only sleeping Tskhinval, but also the disposition of the Russian peacekeeping contingent. On the eve of that aggression, the Georgian observers left the headquarters, and the battalion, together with the regular troops that invaded the city, opened fire on Tskhinval and on the positions of the Russian IS. International commissions and eyewitnesses later confirmed that the very first shells exploded precisely near the location of the Russian peacekeepers. Russian and Ossetian ministries had to take defensive positions and fight, protecting civilians. And only thanks to the conduct of a military operation to force the aggressor to peace, was the actual extermination of the Ossetian people in the RSO stopped.

This is one example of how individual politicians, trying to play bloody games in the interests of their henchmen, try to dispose of one peacekeeping force as executioners, and the other as hostages.

Options for a resolution on the peacekeeping mission in Donbass are being discussed these days.

The essence of the Ukrainian version of the document is that peacekeepers are located throughout the territory of Donbass, including the uncontrolled Ukraine section of the Russian-Ukrainian border. In turn, Moscow insists that the functions of the contingent be limited only to the protection of OSCE monitors on the border of Ukraine with the unrecognized republics - in the format of Minsk-2.

If we take into account the very essence of peacekeeping missions, the Ukrainian proposal is initially flawed. The place of peacekeepers is not in the rear of one of the parties to the conflict, but on the confrontation line. They are not border guards to stand on the border between Donbas and Russia, not occupying troops to occupy the entire territory of the republic. Many political observers agree with this, but their opinions differed on another issue.

Is the presence of peacekeepers in the conflict zone between Ukraine and the republics of the DPR and the LPR necessary? Of course, to judge today definitely can not. It is also clear that Russia’s desire to end the war, stop the victims, the destruction. But it is impossible not to calculate the actions of the West, which may try to push the peacekeeping forces precisely on the border between Russia and the unrecognized republics. And this also means a change in the status of Russia in the internal Ukrainian conflict. Already the parties to the conflict are not the DNR and the LC, on the one hand, and Kiev on the other, and Russia and Ukraine. That is what Mr. Poroshenko is trying to achieve, what is being said over the Atlantic becomes, as it were, a “fact”: “Russia is an aggressor”.