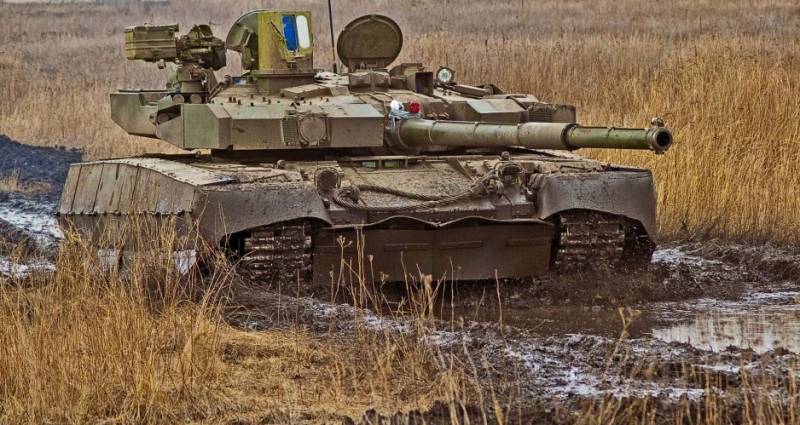 Today, when the economy of Ukraine and its entire military-industrial complex is in a state that, in medical terms, can be called thermal, its representatives continue to assert that their country is one of the leading tank-building powers in the world.

As evidence of this, “the pride of Ukrainian tank building, the“ best tank in the world ”of the T-84 BM Oplot is given. Despite the fact that this “miracleweapon"Adopted by the armed forces of Ukraine in the 2009 year, at the disposal of" fucking fathers "these machines are not thick.

Most of the products of the Ukrainian military industrial complex were traditionally exported, and even with the start of the war in the Donbas, the situation did not change much. That’s the majority of the “Plots” produced by the Ukrainian industry were exported, despite the loud scandals accompanying the delivery of these cars abroad.

Significant incident occurred with export of “the best in the world” tank»Thailand a year and a half ago. The next batch of ten new Ukrainian Oplot-T tanks arrived at the Sattahip Thai naval base on May 21, 2016, and media outlets reported dissatisfaction with Thai partners in Ukraine.

The point is not only that the contract was actually failed, since 49 tanks should have been transferred to the buyer three years ago (at that time only 20 vehicles were delivered). Ukrainians also frustrated the delivery of ammunition to the tanks, and the “Pillars” themselves cause a lot of complaints about the quality of manufacturing.

Actually, it is difficult to expect another - after all, Oplot-T, in the form in which the Thais receive it, is not a new car, but the result of “technical cannibalism” for which the old Soviet T-80 acted as a donor.

That is, from several old tanks collect one "new". It is a profound modernization, according to the Ukrainians, in which they take, say, a body from an old car, and fill it with new aggregates and equipment, it does not go.

However, it is not even “cannibalism”, but rather “blasphemy”, since “the newest tanks,” as they are called by the Ukrainian media, are created from the remains of 4-5 storage technology. That is, from the fact that it is located in the open air at the “tank cemetery”, it was overgrown with grass and simply was not sent to be melted in time.

According to Ukrainian media, there are several hundred engines in the warehouses for the T-80-GTD-1000T, of varying degrees of preservation, from which it is possible to assemble the remaining 29 units before the contract. It is difficult to say how long these “Frankensteens” will work after such a “capital”.

To this we add that the guns of the "Plots" were also removed from the "corpses" - Ukraine has not managed to master their production.

The stocks of liquid old in the warehouses of Ukraine are coming to an end, especially since exporters have a serious competitor - the war in the Donbas, with a considerable appetite absorbing military equipment.

Ctrl Enter
Noticed oshЫbku Highlight text and press. Ctrl + Enter
We are
Armored vehicles of Ukraine: results, potential, prospects ...The best main battle tanks of the world 2012 of the year
50 comments
Information
Dear reader, to leave comments on the publication, you must to register.