Beretta compact pistols for self defense and concealed carry

November 24 2017
6
One of the short-bar niches weapons in the civilian market are pistols designed exclusively for self-defense. You can protect your life, health and property with any pistol or revolver, the main thing is that the weapon should be on time at hand and be ready for use. However, for weapons, which are positioned as a means of self-defense, the requirements are separate, they also include the issue of quickly bringing on alert, safety of wearing and, in fact, wearing itself.


In this article, I propose to get acquainted with the small-sized pistols of the Italian company Beretta, which are now in production and are available, or will soon be available, for purchase. 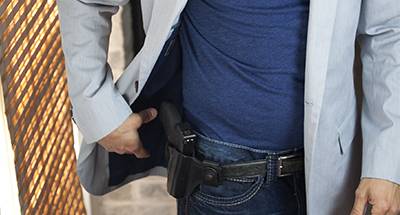 Begin acquaintance with small-sized pistols of the Italian company stands with new products, which are just announced. One of such novelties is the gun BU9 Nano. The main advantage of this gun manufacturer does not highlight its dimensions and design, excluding any protruding parts, but that the gun is powered by 9x19 cartridges, consider the device in more detail.

The basis of the gun Beretta Nano became automation with a short barrel stroke. Everything is implemented in the same way as in the "adult" versions of weapons. Coupling the housing-bolt with the barrel occurs due to the entrance of the protrusion above the chamber into the window for ejection of spent cartridges. Disengagement occurs with a decrease in the breech breech, which occurs due to the interaction of the figure cutout in the tide under the cartridge chamber and the closure axis.

Speaking of closures. In order to reduce the dimensions of the weapon and minimize the protruding parts on its surface, it was decided to abandon the design of the contactor in the classic version. Now, instead of turning the contactor when disassembling the lever, you need to perform the same procedure with a screwdriver. In principle, such a decision is fully justified, provided that it is not often that a pistol is fired, and, accordingly, it will require less maintenance. 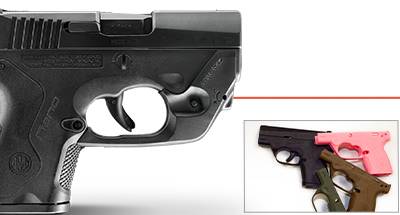 If we talk about the controls of weapons, then on the sides of the pistol there are only three: a shutter delay button, a magazine eject button and a small button for lowering the firing pin from the pre-platoon.

The aiming devices of the BU9 Nano pistol are represented entirely and with the front sight, which can be replaced with similar ones, but with light accumulating elements more for use in low light conditions. What is most interesting, with such compact dimensions the gun can be equipped with a laser target designator. True target designator will be a special design and at least a special price. Prior to the sale of this gun, the price for this LCU is almost 160 US dollars, and this is with a discount of 24%.
The design of the gun allows you to change its individual nodes completely independently, in the event of their failure. You can also replace the plastic frame of the weapon, it is assumed that there will be a version of the frame, even brutal pink.

The trigger mechanism of a pistol is a percussion pistol, with dovzvodom when you press the trigger. The trigger pull force will be less than 3 kgf, the trigger stroke is about 6 millimeters. The safety of the BU9 Nano gun is ensured by an automatic fuse in the form of a key on the trigger. 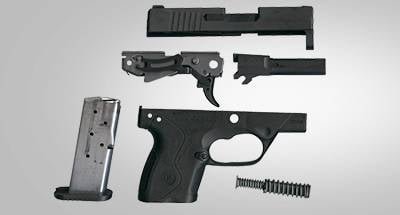 If we talk about the dimensions of the weapon, it is 25 millimeters of thickness and 120 millimeters of length. Although this is not indicated on the manufacturer's website, but the trunk is likely to have a length of 54 millimeter. About weight yet nothing is known, if we do not take into account the assumptions built on similar weapons from other manufacturers.

The standard pistol magazine will hold 6 9x19 cartridges, plus you can add one cartridge in the chamber, provided the weapon is relatively secure. In addition, it will make the gun constantly ready for use, which is important for self-defense weapons. In addition to the standard store, there is a store of expanded capacity on 8 cartridges, with a distinctive “toe” for the little finger.

In general, the BU9 Nano pistol seems quite interesting, especially as a self-defense weapon chambered for 9x19. In this gun, you can clearly trace the use of individual developments of the company from an APX pistol, which participated in the competition for a new short-barreled weapon for the US Army. And although the gun is not a “record holder” for any of its parameters, it must find its buyer. 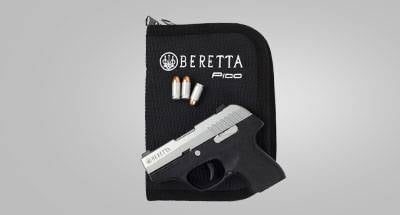 Beretta’s slimmer pistol is another Pico pistol. The thickness of this model of weapons of all 18 millimeters, however, and he already eats the cartridge .380ACP.

The design of the weapon differs from the previous model primarily by the firing mechanism. In the gun Beretta Pico it is more simple, only double action without dovzvoda. Ensuring the safety of the handling of weapons is limited only by the great effort of pressing the trigger, which does not have an automatic safety device. 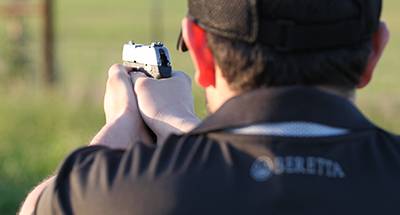 The controls of the weapon as well as the Nano are few: on the right side there is a fairly large slide-stop lever, but the magazine eject button is made in the form of a slider at the base of the safety clip of the weapon. The contactor, as in the previous gun, is controlled with a screwdriver.

Sights are presented entirely and front sight and interestingly, this gun can also be equipped with a laser designator. The truth is that in this case it will be necessary to replace the entire frame of the weapon with a frame with an integrated LCC. An interesting fact is that the frame with LCC for a Beretta Pico pistol is much cheaper than just a laser designator for a BU9 Nano pistol. 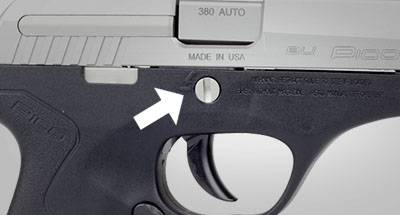 Despite the relatively weak ammunition, the designers applied the automation scheme not with a free gate, but with the use of recoil energy in the short course of the barrel. This solution allows you to stretch the moment of recoil, which is only a plus for small dimensions and weight of the weapon. In addition, thanks to this solution, the gun itself will not experience critical loads when firing, which means its resource will be quite high.

It feeds a pistol from single-row stores with a capacity of 9 cartridges. 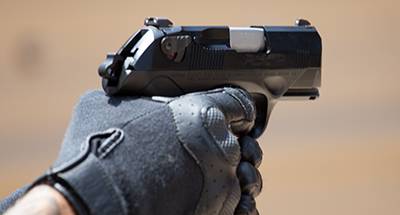 This gun needs to be singled out separately, as it is based on one of the most interesting developments of the Beretta company - the Px4 Storm pistol.

Unfortunately, the gun, due to its size, lost the main feature of its older brother - automation with locking the barrel when turning the barrel, but the gun from this has not ceased to be quite interesting.

The automatic weapon in this case is based on the use of recoil energy in the short course of the barrel with locking protrusion above the chamber and a window for ejection of spent cartridges. Trigger trigger pistol trigger double action. The weapon has a duplicated fuse switch on both sides, the button for removing the magazine can be rearranged to the left side of the gun. But the slide gate lever is installed only on the left side. 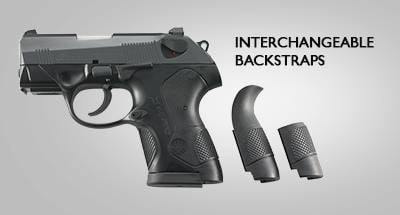 Despite the fact that the gun used a fairly common system of automation, this weapon compares favorably with other models of pistols, with the same weight and dimensions, very low recoil. The secret of low recoil is a barrel that is rather heavy for such a weapon, which in the first few seconds of a shot moves at a slower speed than other subcompact pistols. At the same time, the weight of the housing-bolt allows the weapon to maintain high reliability in operation. 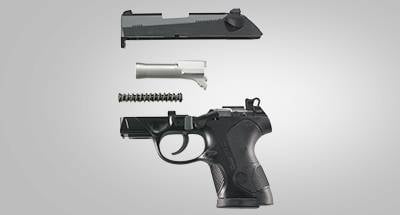 This gun is also different in that it can be adjusted to the palm size of the arrow with special pads on the back of the handle. And such an opportunity is not often seen in a compact class weapon.

Sights are all the same and the front sight with white dots. The sight and front sight are removable and can be replaced with more convenient ones for the shooter. 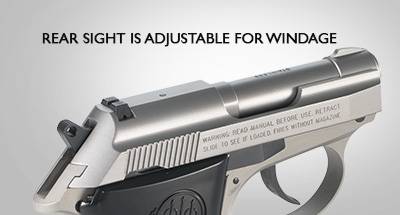 These pistols are representatives of the oldest line of compact weapons of the company Beretta, one can even say that they have become classics. Fundamentally, the pistols do not differ from each other, the only difference is in the shape of the safety clip.

Previously, it was a whole line of compact weapons in various calibers and variants, but now there are only two pistols left in the chrome version.

These guns are fed with .32ACP cartridges from stores with a capacity of 7 cartridges. 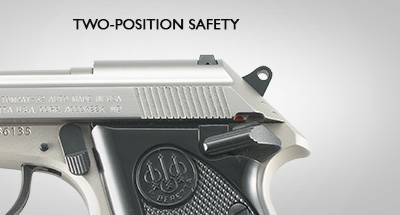 An interesting feature of this weapon is the button for extracting the magazine, which is located on the left side on the bottom of the pistol grip. Despite its compact dimensions, the gun has an adjustable rear sight, however, there is no possibility of replacing aiming devices, like in modern models of weapons.

It is also interesting that the barrel for cleaning rises its breech-up, which is not often found in pistols. 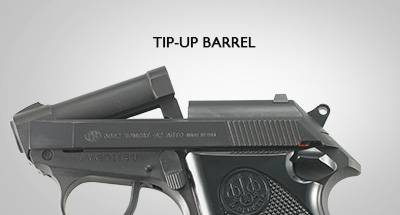 By modern standards, these pistols can hardly be considered a full-fledged means for self-defense, since the cartridge is rather weak and will not be able to stop the attacker in some cases, although an attack, whatever it may be, will not go unnoticed.