November 15 2017
10
105-mm self-propelled howitzer M7B2 Priest was the latest production version of the famous American self-propelled guns of the Second World War period. This modification was in service longer than the others, the American army used this ACS during the Korean War. In the postwar years, various variants of the Priest self-propelled artillery mounts were also widely supplied to US allies as part of various military assistance programs. So several dozens of M7 ACSs, including the M7B2 Priest modification, were received by the Belgians, in Belgium they were used at least until 1964, and the Germans also received it. In Germany, self-propelled howitzers M7B2 Priest for some time were in service with the newly created Bundeswehr.


This American 105-mm ACS was created already during the Second World War, it was standardized in April 1942, after which it received the official designation 105mm Howitzer Motor Carriage M7. At the same time in April 1942, the first serial self-propelled guns were made, two of which were sent to Aberdeen to conduct comprehensive running and fire tests. The personal name “Priest” (Priest) of this SAU was given not by the Americans, but by the British, by the SAU supplied to the UK as part of the Lend-Lease program.

Self-propelled gun was built on the basis of medium tank M3, therefore, retained the layout of the base tank. The engine compartment was located in the aft part, the fighting compartment - in the open, stationary deckhouse in the middle part, and the control compartment, combined with the transmission compartment - in the front of the combat vehicle. The crew of the self-propelled artillery installation consisted of 6-7 people: the driver, gunner, commander and three or four numbers of combat crew. 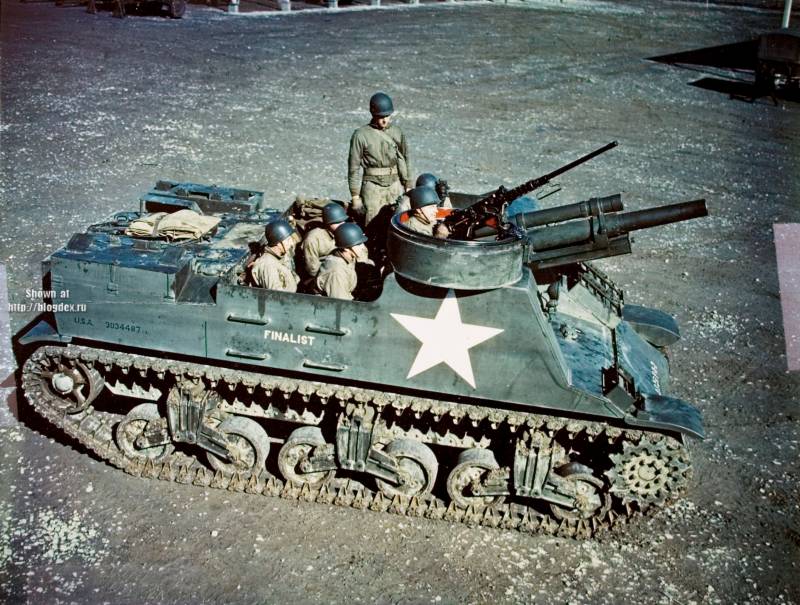 The main weapon and main shock power of the M7 Priest ACS was the 105-mm howitzer M2A1. A number of specialists after the war noted as a disadvantage the relatively light 105-mm howitzer for such a heavy and large tank chassis M3 / 4, but it has a different point of view. Thanks to the installation of such a howitzer, the M7 possessed a much better reliability in operation than numerous improvised self-propelled howitzers of the same time period, many of which were frankly overloaded chassis and often resulted in vehicle breakdowns. Also, the choice of the 105-mm howitzer M2A1 as the main armament of the new ACS was determined by considerations of launching the M7 into mass production as soon as possible. Moreover, the M105 towed 2-mm howitzer was previously standard for American tank divisions, while the only alternative to it (not used in tank units) was twice as heavy as the 114-mm cannon and the 155-mm howitzer.

The main disadvantage of the ACS was different, it was generally recognized and was directly related to its design feature. The indisputable disadvantage of the M7 Priest self-propelled howitzer was the insufficient angle of elevation of the gun, which limited both the range of fire and the tactical capabilities of this self-propelled unit. In a real combat situation, special measures were necessary to achieve large elevation angles of the gun, in particular, the equipment of firing positions on the reverse slopes of heights. At the design stage of the ACS, this drawback seemed to the American Panzer Committee less important compared to a decrease in the height of the self-propelled gun. However, the practice of using the machine in battles, primarily in the mountainous landscape of Italy and then Korea, has shown that this drawback is significant. Experts also isolated the insufficient angles of the horizontal howitzers, which, incidentally, was typical of almost all ACS of those years. However, if the usual towed gun, if necessary, could be deployed in place to move fire beyond the available pickup angles, the M7 Priest ACS needed to leave the equipped firing position and take it again, which took not only time, but also destroyed prepared disguise. 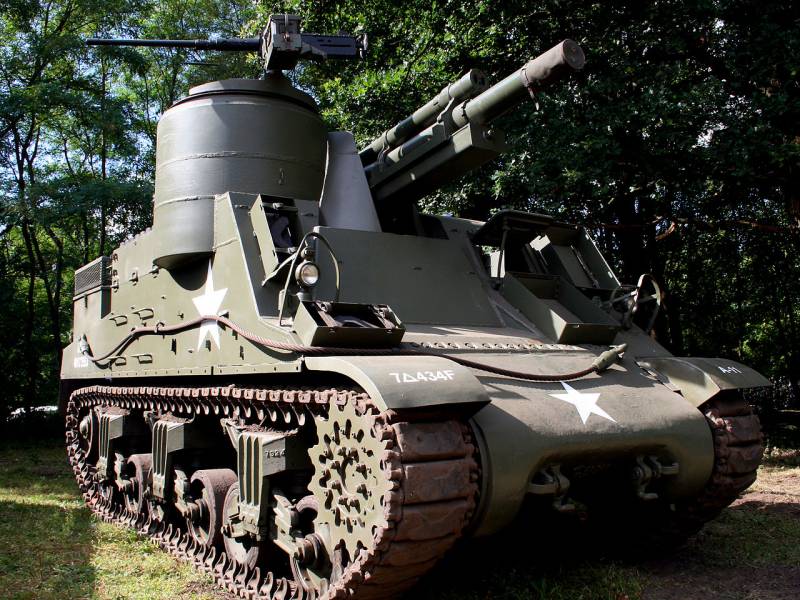 SAU M7B2 Priest
And if Americans could still accept small angles of horizontal targeting, then the insufficient vertical alignment angles became a serious problem during the Korean War due to the peculiarities of military operations in the mountainous landscape of the Korean Peninsula. It was then that the latest modernization of the M7 ACS came to light, which could be called a serial one. During World War II, the Americans solved the problem by placing self-propelled guns on the reverse slopes of heights, but this time they decided to upgrade the self-propelled howitzer, deciding to sacrifice its height for this (it became even taller and more noticeable). As a result, the maximum angle of elevation of the gun was succeeded in bringing to 65 degrees, which was indicated in the initial tactical and technical requirements. In standard ACS M7 and M7B1 Priest, the maximum angle of elevation of the weapon was only 35 degrees. At the same time, the height of the sponson of the machine-gun installation was also increased in order to ensure that it preserved the circular sector of the shelling. Alteration of combat vehicles from existing ACN M7B1 was carried out by an army warehouse located in Tokyo. It is believed that the entire 127 SAU was converted here, which received the new designation M7B2 Priest.

After the end of the Korean War, the M7 Priest ACS continued to remain in service with the United States for several more post-war years, until in 1955, the new-generation ACS, M52 and M44, designed to completely replace military installations, did not begin to flow into the US Army. Then the Americans transferred a large number of Priest self-propelled howitzers to their allies, mainly to NATO countries. For example, the M7B2 Priest self-propelled guns went to Belgium, Germany and Italy.

It is worth noting that the army of Germany after the war was completely dependent on the allies and for a long time was treated exclusively by armored personnel carriers and light tanks, the first self-propelled guns M7B2 Priest were received by the Bundeswehr only in 1956 year. Self-propelled howitzers of this type were in service with units of the 1 Panzer Division. True, they remained in service with the Bundeswehr for a relatively short time, they were used until about the middle of the 1960s. Soon enough, they began to be replaced with new self-propelled guns of the American production - the M52. At the same time, the decommissioned ACS M7B2, due to their general obsolescence, turned out to be mainly on army training grounds, where they were used as targets. 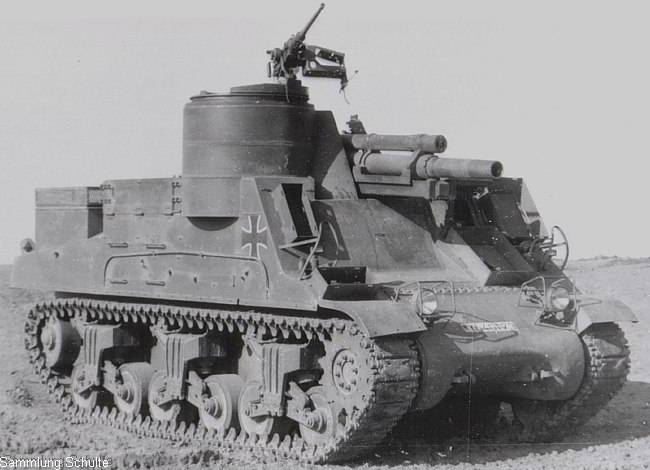 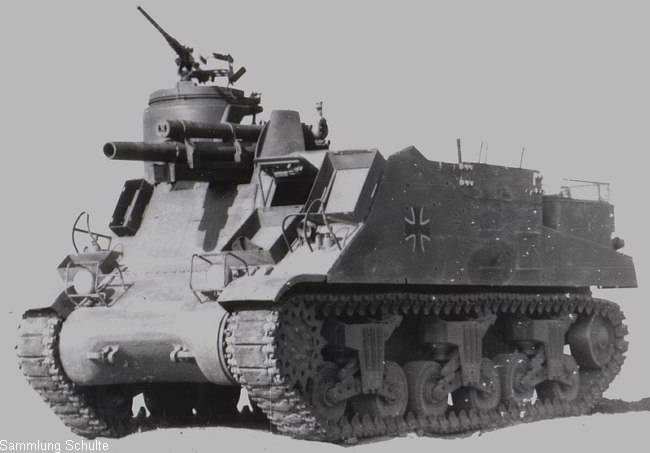 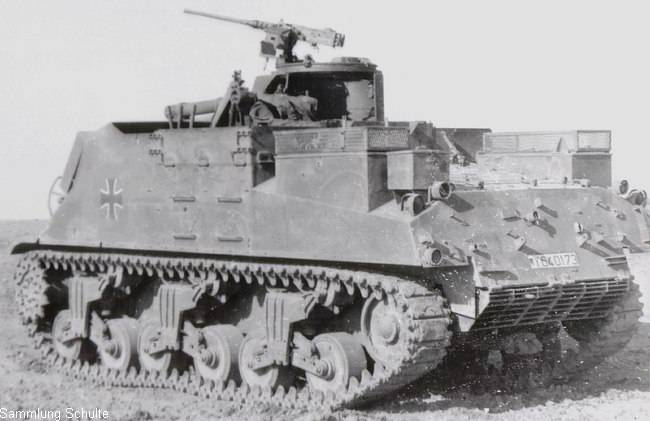 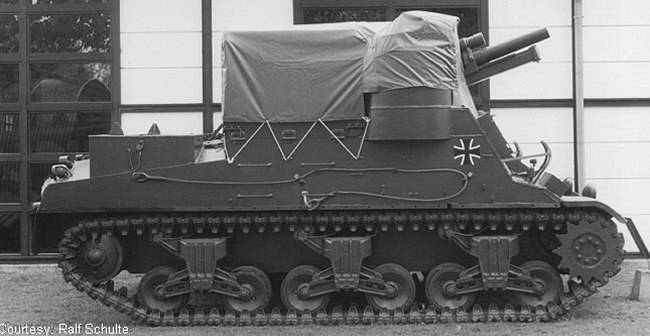 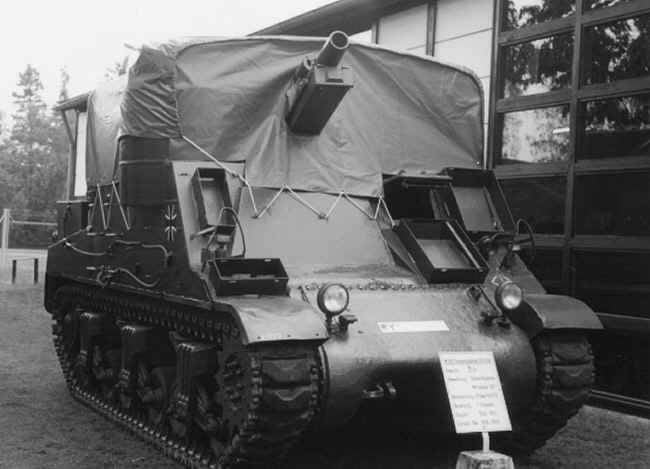