Sturmgever and stamping. The truth about the Kalashnikov machine (Part of 1) 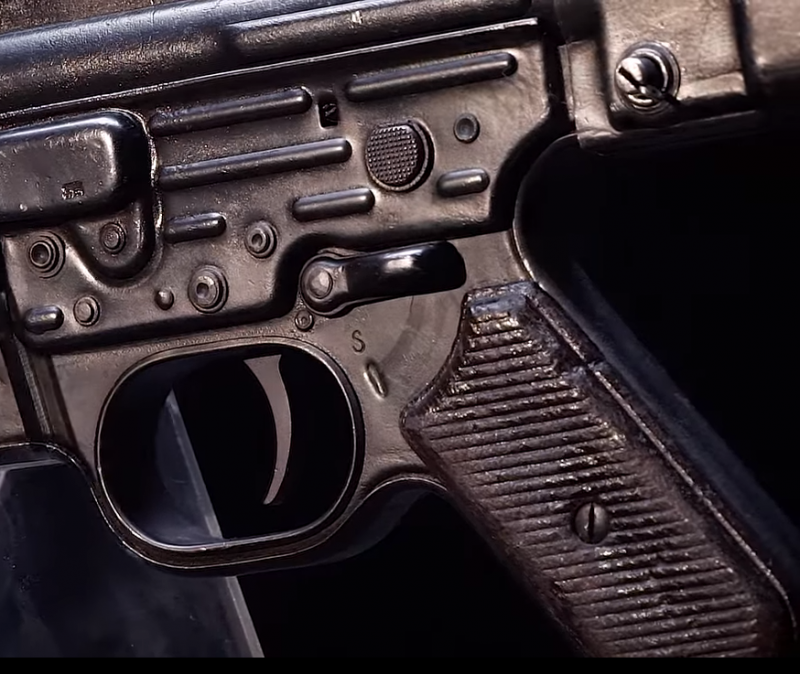 Actually, with the stamps and begin, but not with those that matrix-punch. Let's start with mental clichés, which can often be heard in the form of statements on a given occasion. Most often, they carry false information, since they are either created on the basis of conjectures due to the lack of information or the author’s illiteracy, or used in isolation from the context of the topic of conversation or discussion. Let me give you the source of information that served as the basis for the article. This is the introduction of mass production of AK-47 in Izhevsk.

The AK design has already “settled down” by this moment, and all that the German specialist could theoretically help at this stage is the adjustment of mass production with extensive use of stamping. But here, too, there was an embarrassment - the Izhevsk plant was not ready to withstand the desired quality of stamping, heat treatment and riveting of the receiver boxes, so that in 1950, the designers of Izhmash had to create a new milled receiver for AK. In this, they needed the help of “having eaten a dog” by stamping Schmeisser as the same dog as the fifth leg.

However, the start of production of the winning sample sample M.T. Kalashnikov clearly showed that the Soviet industry 1949, it is quite difficult to reach the level of Germany 1942 year. Even despite the "import" of the machine park and the number of specialists (including the chief designer of the Henel company and the creator of MKb42 (H) Hugo Schmeisser) from the capitulated Germany, it was not possible to expand the production of the "pressed" machine, the marriage rate was unacceptably high. As a result, the USSR had to compromise, starting with 1951, to make AK with a milled receiver. Go to stamping finally succeeded only with the adoption of AKM in 1959 year.

1 stamp. Schmeisser was a stamping specialist.

Schmeisser was the designer. Although so-so is a designer, but a designer, and stamping is a technology. With the same success it was possible to call him a specialist in metallurgy or accounting, or an effective manager, which, however, is also used in another stamp stating that Schmeisser was the organizer (of design work or production). You can easily find the roots of these myths. Schmeisser himself has never been a master of organization and management, rather the opposite, but he was an outstanding master of marketing and public relations. Otherwise, there’s no way to explain the fact that the MP-40 submachine gun is still called the Schmeisser, and the designer himself is the father of almost all European rifle automation.

If the simple design skills of a gunsmith do not require special training and most often are a natural gift from people like Kalashnikov, Browning, Degtyarev, Shpagin and many others, then in order to become a specialist in stamping, you need certain knowledge and skills to work with numbers and reference books that you can get only in specialized schools. The punching specialist was Dr. Werner Grüner, who together with Schmeisser worked in Izhevsk among other German specialists arms and motorcycles. Gruner's merit was in creating the MG-42 - the best machine gun of the Second World War, precisely in the production technology of this machine gun, and not in its design, for which Kurt Horn, the designer of Grossfus, was responsible. I remember well how in childhood I heard the legend that the famous Schmeisser worked at Izhmash, and his son studied at the Izhevsk school. But the school was attended by two sons of Grüner, and the son of Schmeisser remained in Germany! Is it any wonder that the fame of a stamping specialist was stuck to his fake fame of an outstanding gunsmith? Or even a “stamping organization specialist.”

Hugo Schmeisser himself legally rules on Haenel from 1943 onwards, and before that he served as chief engineer. But in fact, they drove this company with 1925 for a couple with brother Hans, removing the incapable young heir and owner of Herbert Henel.

Finally, at Haenel there was no stamping at all. The stamped parts for the Sturmgewer were designed and manufactured at Merz-Werke from Frankfurt am Main. Subsequently, the production of "stamping" was scattered across several enterprises, from where it was sent to the final assembly of stormgears in "Haenel", "ERMA", "Sauer & Sohn" and "Steyr".

So Schmeisser didn’t eat any dogs, as he understood even less in design technology than in design. The fact that the other five German gunsmiths from among the German specialists who worked on Izhmash in 1952-1956 had no relation to the production of AK-47 and could not have had already been written.

In general, technologists are undeservedly in the shade. The absolute majority does not know what they are doing in production, but if to be completely objective, their merit in ensuring the reliability and, in the end, the world famous weapon model is sometimes more significant than even the design of the weapon itself. Lovers tank stories Perhaps the name of Boris Evgenievich Paton is known - the creator of the welding machine, thanks to which the welding of the hulls of T-34 tanks accelerated ten (!) times. But which of the "experts" can name the authors of the technology for the production of weapons barrels by the method of radial compression or the production of turbine blades aviation directional solidification motors? No matter how perfect the design of the sample, no matter what outstanding characteristics it possesses, until the technology of cheap mass production is created, it will remain in the form of a model or an experimental batch.

2 stamp. Soviet stamping in 1949 could not reach the level of German stamping 1942 of the year.

This refers to a well-known fact, when during the development of the AK-47, it was necessary to temporarily abandon the forged receiver boxes and switch to milled ones. We'll talk about this fact as well as about the features of the Stg-44 stamped construction, but actually it is worth stopping at the “level” of stamping.

The Germans were indeed pioneers in the use of stamped parts in small arms. The MP-40 submachine gun and the MG-42 submachine gun from the point of view of technological innovations left a noticeable trace in the evolution of the weapon. But after all, we had PPSH-41 and PPS-43, which also had stamped parts in their design. If we compare two types of weapons of the same class, then they will be MP-40 and PPS-43. According to all the tactical and technical characteristics of our machine exceeds the German. Reliability automatic Sudaeva and now unattainable with many foreign samples. And now let's compare the production figures.

We take into account that the production of German weapons used labor of prisoners and forcibly driven to Germany citizens from the occupied countries, that is, the cost of working standard hours in Germany was cheaper than in the USSR. And if we consider that the shortage of workers in the USSR was replaced not by captured high-tech savvy German soldiers and non-citizens of the "occupied" countries, but by women and teenagers?

Can we say, looking at these numbers, that the "level" of manufacturability in the production of submachine guns, which includes including punching and spot welding, in the year 1943 was in the USSR more than twice as high as in Germany?!

Achieving the level of manufacturability is a function of time. Recall what Guderian said regarding the copying and production of T-34 tanks:
The proposals of front-line officers to produce exactly the same tanks as the T-34 ... IN THE SHORT TERM ... did not meet with any support from the designers. The designers were embarrassed, by the way, not by aversion to imitation, but by the impossibility of releasing the most important parts of T-34, especially an aluminum diesel engine, from the QUICKLY REQUIRED.

Please note that this is not about construction and not about the lack of aluminum, but about technology. Time to master mass production, which includes the design and manufacture of devices and tooling, calculation and selection of heat treatment and cutting modes, can significantly exceed the time and money spent on developing and testing a prototype, and this may be a decisive factor in achieving political or military successes.