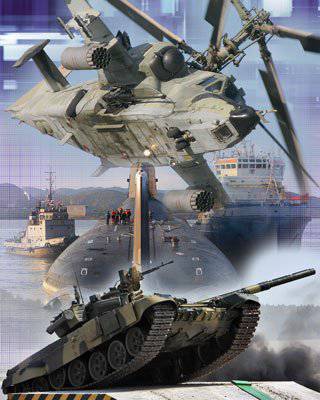 Perhaps the newest stories the national army did not yet have a topic that caused so much controversy as the state rearmament program calculated up to 2020 of the year (LG-2020). The main reason for all the talk about this was the unprecedented levels of planned funding - 20 trillion rubles directly to purchase new materiel and another three trillion to upgrade the production capacities of domestic defense enterprises. The attention paid to industry is quite understandable and justified, because now in our country there are almost no plants or factories that would not have problems with equipment, space, etc. In particular, this is why Sberbank decided to also participate in the LG-2020. However, this organization, as befits banks, will issue loans to enterprises. In the coming 3-5 years, Sberbank will allocate about two trillion rubles for this purpose. Also, we should expect similar decisions from other banks, the share of which belongs to the state.


It is obvious that such a large investment in the defense industry will not be in vain. Moreover, it is already clear that they will change it. Well, given the specific volumes in comparison with other expenses, it can be assumed that these changes will to some extent affect other areas of the Russian economy. At the moment, there are five areas in which 23 will embody trillions of public money.

The simplest and most obvious advantage of investing in the defense industry is an increase in the state’s defense. In the light of the announced sums, the effect of rearmament looks quite real. And domestic weapons and military equipment enjoy success on the international market, which can be considered proof of its competitiveness not only in the field of tenders. Active purchases of our equipment by foreign countries indicate that it fits into their defense doctrines and, as a result, can be recognized as modern. Thus, our defense industry is quite capable of creating good and decent samples, and one of the main problems is insufficient funding.

It should be noted, the modernization of the armed forces will be difficult. If only because new types of equipment will need to be created taking into account their service life and predict which one of them will be relevant for the next 20-30 years. Therefore, for example, in the field of tank building, special attention should be paid to armored vehicles with an uninhabited turret and a capsule for the crew. Such designs are still an unconventional solution, which requires time and, importantly, money to work through. In addition, radically new designs will necessarily require new technologies. Here we smoothly approach the second point.

Unfortunately, in the late eighties, our defense complex began to live from hand to mouth. A number of unwise decisions, first by the leadership of one country, and then by another, formed on the ruins of the first, led the defense industry complex to a very bad state. More or less decent situation was only in those enterprises that were engaged in the manufacture of the finished product, sent for export. But there, too, there was no skating cheese in butter. As a result, the defense industry has pretty much lost its “athletic shape” and it is urgently necessary to restore it. One of the main problems lies in the backwardness of the equipment. If the same approach was maintained as in the Soviet Union, many enterprises in the nineties and two thousand would have been able to significantly upgrade the material part. However, the state at that time had other concerns and the capital modernization of the industry did not happen. Analysts estimate that for the most efficient work, defense enterprises should have 80% new equipment, at least no older than 15-20 years. In this case, up to 2020, it will be possible to raise the productivity of the defense industry by two and a half times. Machines taken as a trophy from Germany, watching with silent reproach. They have a reason for this. So our enterprises will surely find ways to master the allocated three trillion rubles.

However, improving production efficiency is based not only on machine tools and other equipment. All these mechanisms are led by people and they need to be thought of first and foremost, which is the next consequence of rearmament.

It is not a secret for anybody that in recent years workers in the specialty have lost their former prestige. A similar picture is observed with engineers. Therefore, the influx of “fresh blood” into the defense industry has decreased to the size of a small stream. As a result, in one far from perfect moment a situation may occur in which the old-timers of production will have no one to pass on their experience and knowledge. The main reason that young people almost do not go to the production of military purposes lies in the fact that most of the defense enterprises are state-owned and, as a result, they have been financed very scarcely in recent decades, and this has a negative effect on the wages of workers. Naturally, a young ambitious person will go to work where they pay more.

But social problems of the defense industry concern not only the influx of new personnel. At the moment, almost two million people work in one and a half thousand enterprises of the defense industrial complex. If we add to this figure the number of their family members, then two million will increase several times. It turns out that such an element of the economy as the wage rate actually affects a huge number of people. It turns out that the development of the defense industry, first of all, the inflow of financing, will be able to improve the life of a significant share of the country's population. To this should be added the fact that over the past twenty years, our defense industry has been shaken by staff reductions. Accordingly, the implementation of the LG-2020 will require re-recruit workers. According to some calculations, after this set, directly or indirectly, the defense industry will feed about a tenth of the entire population of the country. 23 trillion is a great price for that. But it is worth it.

4. Economy of the future

20 trillion rubles for the purchase of weapons and three for the development of the military-industrial complex will be allocated from the state budget. However, these figures apply only to the period up to and including 2020. What will happen after the twentieth, is still unknown. Probably, the responsible persons are already working on this issue. At the same time, the defense industry should not rely only on public money. It is understood that after the implementation of the HPV-2020, our defense industry will be able to further increase its share in the global arms market. As a result, she will have more money of non-state origin for the creation of new weapons systems and military equipment.

Already last year, our country managed to reach the second place in the world in military exports - now we are confined to the United States. Catch up and overtake America is not easy, but in general, and not necessary. The main thing in the export of weapons - to find their customers and constantly supply them with new systems. According to this scheme, the Soviet Union once worked, and the States are still doing the same. It should be noted that the standards of the NATO alliance help the Americans in promoting their products. Our situation with military blocs is much worse: the Warsaw Pact Organization collapsed long ago, and the CSTO in its place is not yet suitable. It remains only to promote their weapons and military equipment in friendly countries. However, this is not all simple. An example of this is the recent five-minute scandal with the loss of the Russian MiG-35 in the Indian competition. On the other hand, this aircraft is not the only point of contact between Russia and India in the military-technical sphere.

The creation of new weapons systems in the future will allow not only not to lose last year’s second place in sales, but also to improve the results. In addition to direct financial benefits, this will also help increase the number of friendly countries, so rearming your own army can have positive political consequences.

Finally, the fifth positive consequence of the rearmament and development of the defense industry. It consists in the production of the defense industry, in addition to the actual weapons, goods and products of non-military purpose. Only conversion is a very, very controversial way of industrial development. And this time, not only the speculations of analysts can be used as arguments, but also facts from the not so distant past. In the eighties of the last century, our country tried to turn the defense industry on a peaceful footing, and failed to achieve positive results. Unfortunately, almost always, such a “rail track rewrite” followed the same sad pattern. So, the state, and later the market demanded a certain civil products. The bright minds of the defense industry made the product, at least, not inferior to its competitors, but it turned out to be significantly more expensive. It is clear that it is not easy to restructure the production, sharpened for the manufacture of one product, so the price of the finished product from the OPK was higher. Well, when you try to bring it at least to an acceptable level, the quality dropped. All for the same reason.

In order to justify the conversion, it must be said that some defense enterprises were still able to launch the production of peaceful products of decent quality and with a good price. True, there are still less positive examples than negative ones. So, for every good news, for example, about how the "space" GSKB "Progress" is preparing to release a light-engine aircraft "Rysachok", have a bad. But even here the situation is gradually improving.

And yet, one doesn’t have to talk about the effective combination of military and peaceful products produced by defense enterprises. The first and main task of the national defense industry today is the modernization of production and the implementation of the state defense order. Therefore, the conversion is still an ephemeral perspective. Interesting, but dubious or unrealistic.

Claims for HPV-2020 and all related activities can be divided into two categories. The first concerns the expediency of investing such huge sums in defense, the second - of corruption schemes. The question of the “Great War of Guns and Oil” has long been taken apart by bone, and it turned out that defense costs and their drastic reduction have little effect on the overall quality of life. As for the theft of state-allocated money, the existing control should be strengthened. In particular, the proposal of D. Rogozin, who believes that corrupt officials from the defense industry without any leniency, should be punished by the upper limit set by the Criminal Code, would be useful. It only remains to add that the trials of such criminals must be widely publicized. Coupled with large deadlines, this will act soberly on those who have not yet reached the relevant authorities, and work like prevention.

The rest of the investment trillions 23 in defense and defense will be only advantages. Improving the defense capability, lifting the industry, improving the lives of people employed in the defense industry, investing in the future and a number of other, smaller consequences. All this is necessary for the country, although it will be expensive. As the character of one movie said: “the price is high, but I will pay with pleasure”.