November 8 2017
36
Current Naval Development Plans fleet include the construction of a large number of small missile ships of several projects. Over time, one of the main representatives of this class will be the ships of the 22800 Karakurt project. Currently, several similar ships are under construction, one of which has already been launched. According to the Ministry of Defense, in the very near future it will be followed by a second.


On November 5, the Information and Mass Communications Department of the Russian Ministry of Defense published new information on current work in the field of military shipbuilding and plans for the near future. It is reported that in November of this year, the Typhoon small rocket ship will be launched. This ship is the first serial built on the project 22800. As the military reminds, the lead ship of the Karakurt project, named “Uragan”, is already at the berth of the shipbuilding enterprise and is being completed afloat. 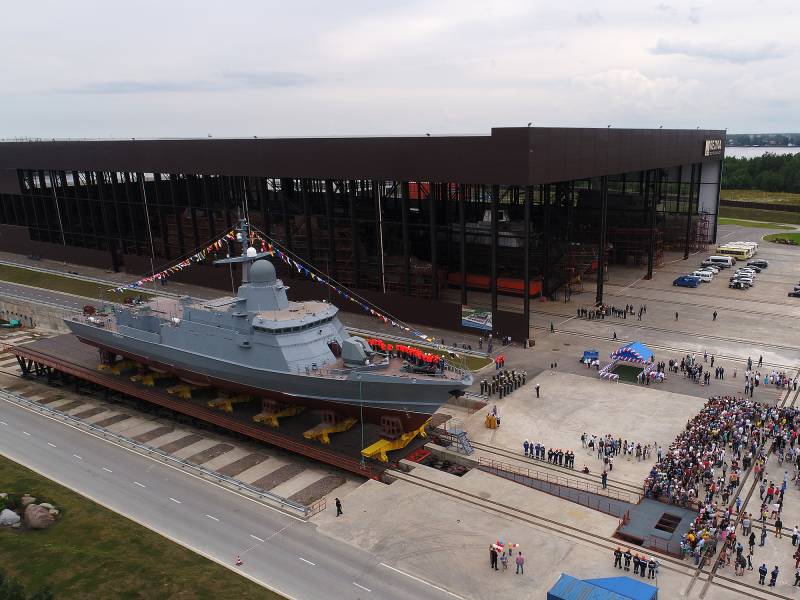 The construction of the head and first serial "Karakurts" is being carried out at the Pella plant in St. Petersburg. In the recent past, this enterprise received a large order for seven small rocket ships. More than half of this order will be executed at production facilities in Otradnoe. The Pella site in the Crimea was also involved in the work.

The deadlines for the delivery of the first two ships of the 22800 project in the new report of the Ministry of Defense were not specified. However, it was previously claimed that the "Hurricane" and "Typhoon" will enter service until the end of 2018. They are supposed to be transferred to the Baltic Fleet. Earlier it was stated that next year the navy could receive up to four "Karakurts" built at different enterprises. In the future, construction will continue for a long time, until the full implementation of existing plans.

Recall, the project of a small rocket ship 22800 with the cipher "Karakurt" was created by the specialists of the Central Maritime Design Bureau "Almaz" (St. Petersburg). The military-scientific support of design work was carried out by the Military Training and Scientific Center of the Russian Navy. The first open demonstration of materials on the 22800 project took place two years ago in the framework of the international military-technical forum "Army-2015". In the same period, the first contracts were signed for the construction of part of the ships required for the fleet.

The construction of the head MRK “Uragan”, which had already been launched, and the first serial ship “Typhoon”, which is only to be sent to the extension wall, started at the very end of the year before last. 24 December 2015 of the year at the Leningrad shipbuilding plant "Pella" held a solemn ceremony for the laying of two new rocket ships. To date, managed to get the first serious results. 29 July 2017, according to the results of several stages of construction, the lead ship was launched and is being completed afloat. According to the Ministry of Defense, in the next few weeks the same will happen with the first serial "Karakurt".

The third ship of the project (the second serial) received the name "Storm" and was laid in May last year. Production facilities in Feodosia, recently transferred to the Pella plant, were chosen as the site for its construction. At the moment, Theodosia shipbuilders are busy assembling and installing the main structures of the future Storm.

29 July and 24 December last year at the site "Pelly" in Otradnoe were laid MRK "Shkval" and "Storm". These ships are still in the early stages of construction. In mid-March this year, the company in the Crimea began to build the ship "Okhotsk". There is also a contract for the seventh ship "Cyclone", but its execution has not yet begun. In total, in the foreseeable future, the Pella enterprise, having two plants at its disposal, will have to transfer to the fleet seven ships of the 22800 project, of which six are at different stages of construction.

According to military plans, the Russian fleet needs at least 15-20 small rocket ships of the Karakurt type. Implementation of such plans by the forces of a shipyard is associated with certain restrictions, which is why other companies were involved in the program besides “Pella”. So, in August last year, the Ministry of Defense signed a contract with the Zelenodolsk plant them. A.M. Gorky. This agreement provides for the construction of five ships with the delivery of the entire series to 2020 year inclusive.

According to the report of the Zelenodolsk plant last year, in the fall or early winter of 2016, the first two MRKs of the 22800 project were laid in the workshops of the enterprise. According to reports, these ships were called "Monsoon" and "Passat." The ships "Breeze", "Tornado" and "Smerch" currently exist only in the plans. Their laying will take place over the next few years.

Next, it is planned to build six more ships needed by the Pacific Fleet. Such an order should receive the Amur Shipbuilding Plant (Komsomolsk-on-Amur). It is curious that the Ministry of Defense has already chosen a contractor, but has not yet entered into a contract with him. In the summer of this year, it was announced that a new official order for serial "Karakurts" would appear only in 2018. This allows you to roughly imagine the timing of the start of construction and delivery of the last of the ordered ships. Apparently, construction in Komsomolsk-on-Amur will be completed in the first years of the next decade.

Thus, over the next few years - no later than the mid-twenties - the Russian shipbuilding industry will build and transfer to the Navy 18 small rocket ships of the 22800 "Karakurt" project. The total duration of the construction program that started in 2015 will reach 8-10 years. Such a combination of time and the number of such ships can be a real cause for the pride of shipbuilders.

A direct consequence of the expected relatively rapid implementation of the plans is to obtain noticeable results already during the first two years of construction. So, to date, the Leningrad plant "Pella" managed to float the head MRK "Karakurt". After completion of completion afloat, expected in the foreseeable future, the ship will be put to the test. No later than the end of 2018, the “Hurricane” is scheduled to be handed over to the customer. Also next year, the delivery of the first serial ship is planned, which is still on the stocks, but is already preparing to be launched.

The 22800 “Karakurt” project proposes the construction of small displacement ships with percussion weapons, to a certain extent similar to the older rocket boats. In this case, the project is based on modern solutions, as well as weapons that meet all existing requirements. Promising "Karakurt" should differ from other modern IRCs of Russian development with higher seaworthiness characteristics allowing them to work in the open sea.

Ships of the 22800 project must have a 800 tonne displacement with a length of 67 m and a width of 11 m. The hull lines comply with the requirements for seaworthiness. Ships are proposed to equip the diesel-electric power plant. Three diesel engines M-507Д-1 and the same number of diesel generators DGAS-315 should provide movement at speeds up to 30 units. The cruising range at economic speed reaches 2500 miles. Stock autonomy - 15 days.

The project involves the use of a variety of weapons designed to attack remote targets and protect against attack from the sea or from the air. There is a complex of artillery means in the composition of the automatic installation AK-176М with 76-mm gun and two anti-aircraft guns AK-630 caliber 30 mm. Earlier it was claimed that instead of the AK-630 systems, some ships would receive a naval version of the Pantsir missile-cannon complex. Also on board the ship there are two installations for large-caliber machine guns "CORD". To enhance the air defense crew can use man-portable air defense systems.

The high impact potential of Karakurt should be provided by the Caliber missile system. In the superstructure of the ship is mounted universal vertical launcher 3С-14 with eight cells. It can be used to launch P-800 Onyx missiles or products of the Caliber family. The composition of the rocket ammunition, the purpose of the missiles and their proportions in the ammunition are determined in accordance with the assigned combat missions. Depending on the type of loaded missiles, the 22800 project's interplanetary missile system is capable of attacking surface and coastal targets at ranges of at least several hundred kilometers.

Earlier it was stated that small rocket ships of the 22800 project are considered as an addition to the under construction MRK of the 21631 “Buyan-M” project, which is distinguished by less high seaworthy characteristics. At the moment, the construction of the 12 ships "Buyan-M" and 18 "Karakurt" is planned. According to the results of the implementation of all the existing plans and the implementation of the signed contracts, the Russian Navy will receive three dozen new ships of relatively small displacement, carrying rather powerful artillery and rocket weapons.

To date, the Navy managed to get five small rocket ships of the 21631 project, the construction of which started at the beginning of this decade. Newer IRAs of the 22800 project have not yet had time to enter the fleet combat personnel, but the moment they began their service is approaching. Next year, several new ship transfer ceremonies are scheduled. In the absence of serious problems, by the beginning of 2019, there will be three or four Karakurt in the Russian Navy. The lead ship is already being completed near the wall, and the first serial ship will reportedly be launched shortly.