November 7 2017
12
The Black Sea Fleet after the Civil War was to be restored almost from scratch. In addition to the destroyers and the Elpidifors, the unfinished ships of the larger classes were inherited from the Russian Empire by the Soviet authorities. And if there was no particular disagreement regarding the fate of the Emperor Nicholas I, renamed “Democracy”: the fourth Black Sea battleship was to be scraped, then there were different opinions on Svetlana cruisers. Their condition was different. 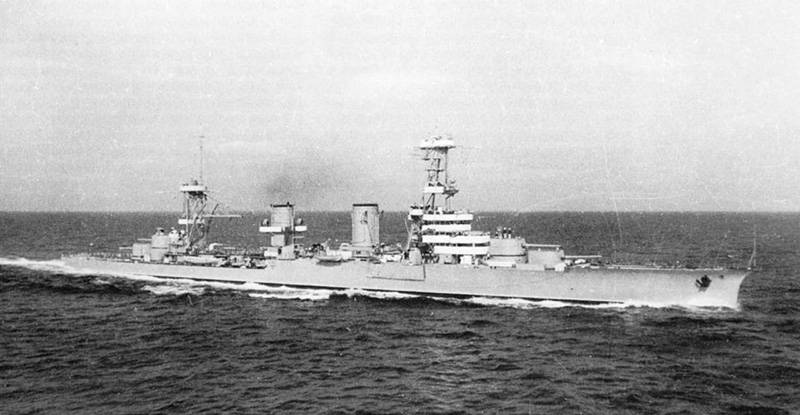 The frequent change of power and the ensuing upheavals and ruin affected the shipbuilding of Nikolaev in the most direct way. During the Civil War, the flags over the City Council were replaced with bizarre speed. None of the authorities vigorously pushing the predecessor in the back paid almost no attention to the shipyards. Of general interest were only capable of self-propelled ships. Only the unfinished destroyer Tserigo was difficult for White to bring to a suitable state, but only to take him along with other ships of the Black Sea fleet abroad. 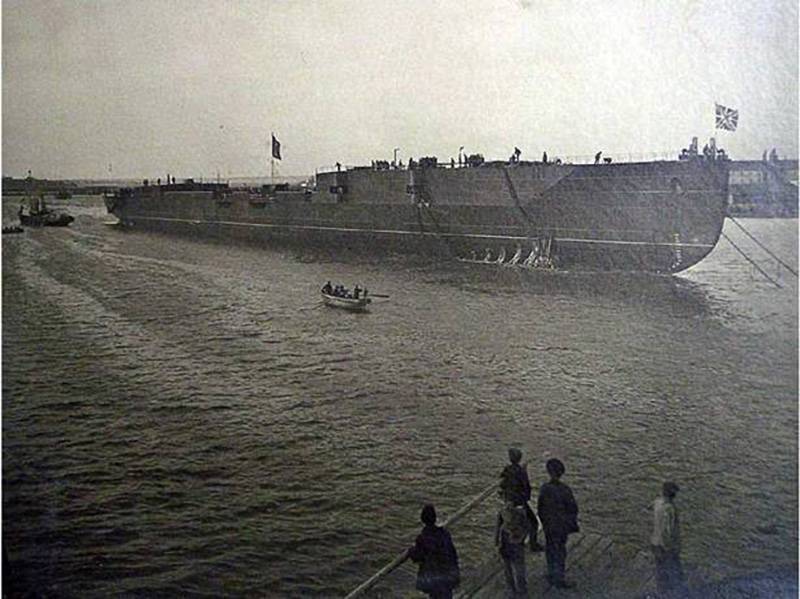 "Admiral Nakhimov" at the plant "Russud" after launching, 1915,

A similar fate, obviously, was waiting for the lead cruiser, laid down in 1913 in Nikolaev, “Admiral Nakhimov”. Driven almost to 70% readiness, the ship finally fell into the hands of the whites and during their retreat from Nikolaev was towed to Odessa, with the further intention of using it as a transport. However, the "pearl by the sea" Wrangel's troops soon had to leave, and in February 1920 thrown off the Admiral Nakhimov in February was thrown onto the shallows. The craft was not even enough to evacuate the personnel, and towing the cruiser was not technically feasible. In February of the same year, the cruiser was returned to Nikolaev, where it was laid up until better times. 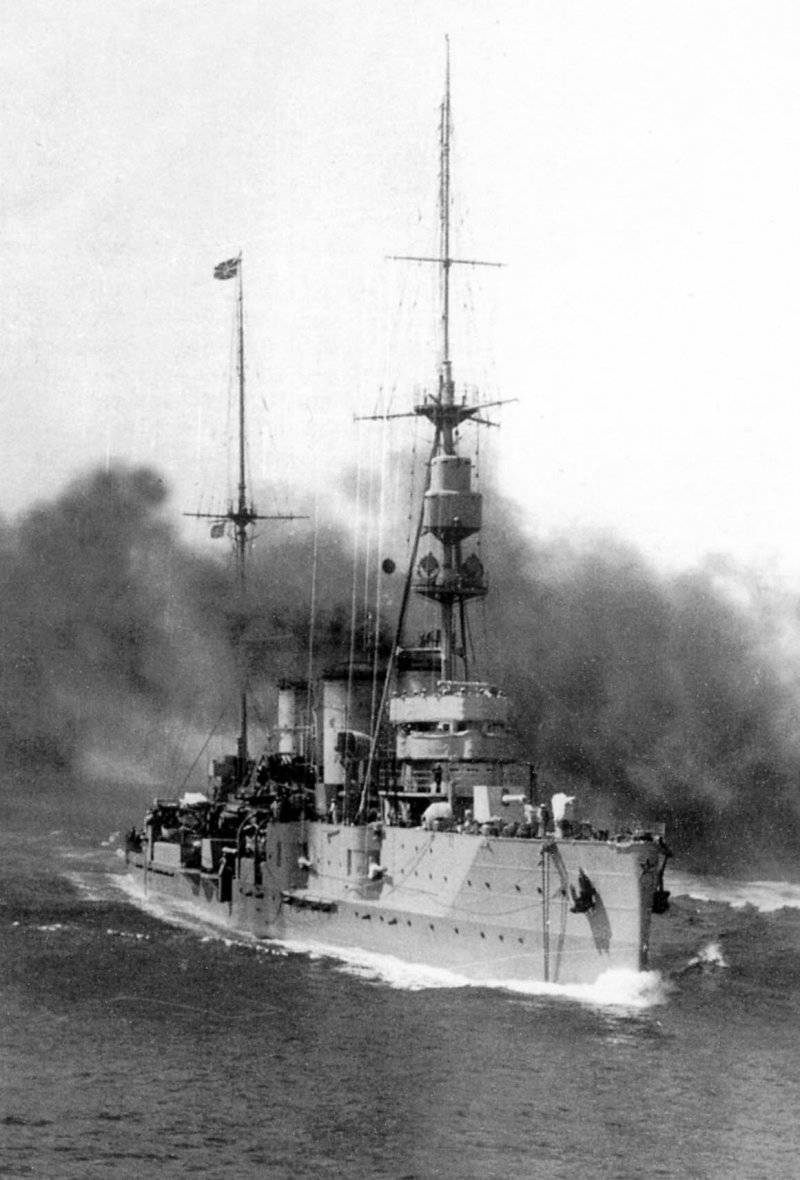 In April, 1923, at the plant named after Andre Marty and Louis Badin (the last name of the company’s name will disappear next year), work began on the construction of the Admiral Nakhimov cruiser on the original project with a number of amendments and changes. The cruiser, renamed the "Chervona Ukraine", became part of the Black Sea Fleet in 1927 year. The ship successfully served up to World War II and took part in the defense of Odessa. 12 November 1941 in Sevastopol, two German air bombs hit the Chervona Ukraine stationed at the Grafskaya Wharf, causing serious damage to the ship. The next day, 13 November, he was towed to the South Bay, where he sank. After the end of World War II, the cruiser in 1947 was raised, repaired and turned into a target ship. 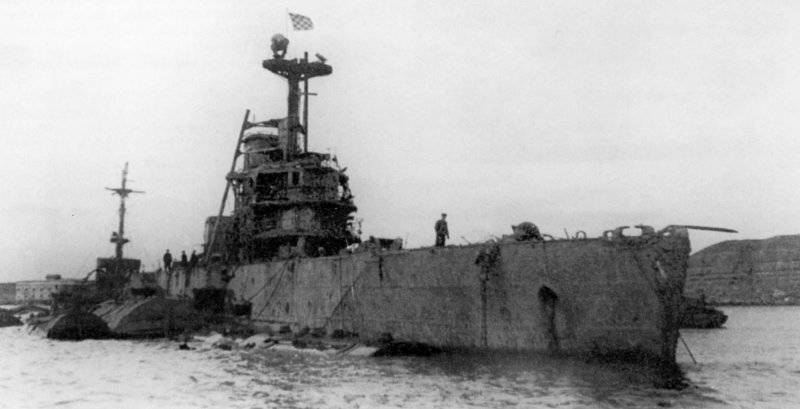 The second ship of the series, brought to a high degree of readiness, the "Admiral Lazarev" was also decided to complete. The third and fourth Black Sea cruisers “Admiral Kornilov” and “Admiral Istomin”, whose hull completeness was 30 – 40%, stood all these years on the slipway, and refused to complete their further construction. The commissioning of their more successful fellow “Admiral Lazarev” was quite long and thorny, however, as was his difficult descent into the water, which was carried several times (the ship was stuck on the stocks).

Since May, 1916, the Admiral Lazarev, has been completed afloat in the waters of the Russud plant, where the revolution caught it. To a lesser degree ready than his elder brother, he did not so much attract the attention of the often-changing "guests of the city", each of whom declared himself the legitimate authority. Admiral Lazarev’s readiness for the beginning of 1918 was estimated at 50 – 55%.

The occupation of Nikolaev by the troops of the Kaiser army was marked by the partial plundering and removal of some equipment mounted on the cruiser to Germany. Representatives of the hetman Skoropadsky, who ruled the Germans in the shadow, were not interested in shipbuilding. For the Armed Forces of the South of Russia, Admiral Lazarev also turned out to be useless. The rusting ship with littered inner rooms was laid up right up until the beginning of the 20s, when the Soviet authorities decided to complete its construction.

However, by that time the construction of “Washington” cruisers, the fruit of the international agreement of the same name, had already begun. Their main caliber reached 203 mm, and the Admiral Lazarev, completed under the original project, looked plainly weak against their background. And if it was already unproductive and too expensive to change something drastically in the much more complete Admiral Nakhimov, then it was decided to rebuild his sistership by an improved project with the replacement of the main caliber with more powerful barrels. 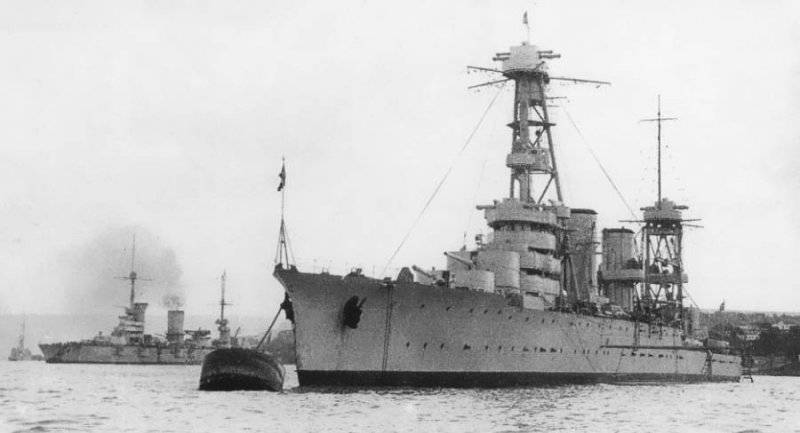 Cruiser "Red Caucasus", the middle of the 30-ies. (in the background the battleship "Paris Commune")

The final decision on the completion of the cruiser was made in 1924 year. The project on re-equipping the ship with more powerful 203-mm guns (they should have been dismantled from other ships that are being prepared for disposal in the Baltic) was ready for 1926. In December 1926, the Admiral Lazarev was renamed “Red Caucasus”, and in the next year 1927 put in a floating dock for cleaning the bottom. Work on the ship was conducted at a low rate - at the same time projects for its restructuring and completion were replicated and reshaped.

In the process of evolution of ideas and concepts, the “forced” version of re-equipment on 203-mm guns was abandoned in favor of the latest 180-mm artillery systems that came to the rescue, which were decided to be placed in tower installations. Strongly protracted and sluggish repair work was fully resumed in 1929. The cruiser "Red Caucasus" was being completed at the plant named after Andre Marty in close cooperation with other enterprises of the Soviet Union. The Bolshevik plant produced 180-mm guns, the main caliber towers were under the jurisdiction of the Leningrad Metal Plant. Finally, the "Red Caucasus" was prepared for entry into service by the beginning of 1932, and thus was the last warship to replenish the Soviet Navy, whose construction began during the Russian Empire. 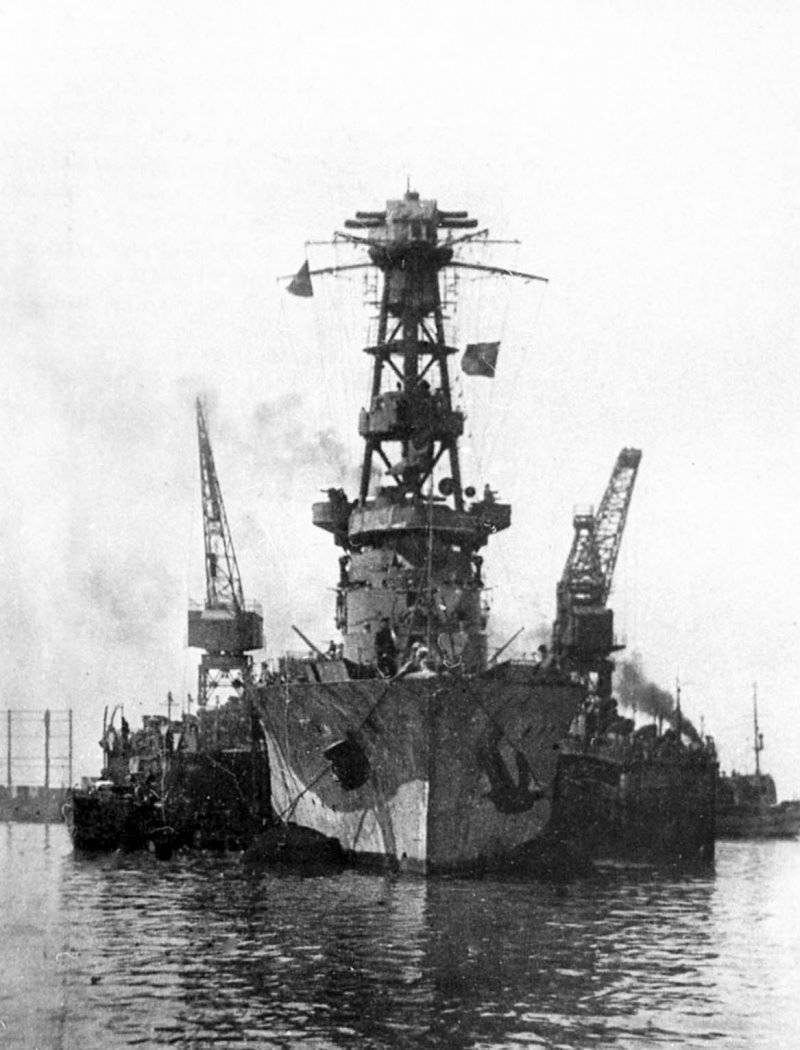 Red Caucasus in a floating dock during repairs in Poti, 1942

Cruiser career was very intense. Unlike Admiral Nakhimov, he went through the whole war. He participated in the defense of Odessa and Sevastopol, in the delivery of reinforcements and supplies there, in the evacuation of the wounded. During the Kerch-Feodosia operation. 4 January1942 of the Year The Red Caucasus was seriously damaged as a result of the attack of the German dive bomber Ju-87 and was put to repair in Poti. In April, 1942 was awarded the title of Guards for military service. In February, the 1943 th cruiser provided amphibious assault near the villages of Yuzhnaya Ozereyka and Stanichka. After the war, in 1947, it was reclassified first into a training ship, and then into a target ship. Sunk as a result of tests of the KS-1 projectile in November 1952.

The Soviet fleet needed replenishment with the newest ships: everything was needed and in a short time. An important place in the emerging national naval doctrine, which had, due to the extreme modesty of available resources, purely defensive in nature, was occupied by submarines. They needed not only restored Baltic and Black Sea fleets, but also planned to strengthen the naval forces in the Far East and the North.

By the end of 1920's The plant named Andre Marty already had a certain, even pre-revolutionary, experience in the construction of submarines. In addition to the mine crab "Crab" of the project of engineer Naletov, the construction of which began in 1909, already during World War I, the plant, then "Naval", received an order from the Marine Ministry for four submarines, which are the development of the Baltic project "Bars". In October, the Storm Petrel, Orlan, Pelican and Swan were laid 1915. They had a displacement of 650 / 790 tons and were armed with four 450-mm torpedo tubes, one 75-mm, one 37-mm guns and a Maxim machine gun. Before the revolution, only the Petrel was handed over to the fleet, subsequently taken to Bizerte. The remaining three boats were flooded with white during the retreat.

The plant had experience in construction, or rather in the assembly of submarines of the type "AG". Now, the Soviet fleet needed submarines of new projects that meet the time and level of development of modern technology. The maritime program, adopted in 1926, provided for the construction of a series of large diesel-electric submarines for the Baltic and Black Sea fleets. The design order for the first submarines after the October Revolution was received by the Technical Bureau's Design Bureau No.4 of the Baltic Plant. At the start of 1927, the project was approved.

Already in March of the same year, the laying of the first three boats of the I series of the Decembrist type took place at the Baltic Shipyard. 14 April 1927, three more submarines of the II series were laid at the plant named after Andre Marty in Nikolaev. They were named "Revolutionary", "Spartacist" and "Jacobin". In the series, the submarines were designated D-4, D-5 and D-6. They were large for their time ships with a displacement of 933 / 1333 tons, equipped with ten 533-mm torpedo tubes, one 102-mm and one 45-mm guns. Two 1100-strong diesel engines from the Kolomna plant were used as a power plant of the surface run, the German ones produced by the well-known MAN. A part of the equipment was also purchased abroad. In 1930, all Black Sea submarines entered service and subsequently took part in the Great Patriotic War. Only D-5 Spartacist survived the war. D-4 died from depth charges in 1943, D-6, being repaired in the dock of Sevastopol, was detonated at the end of June 1942. 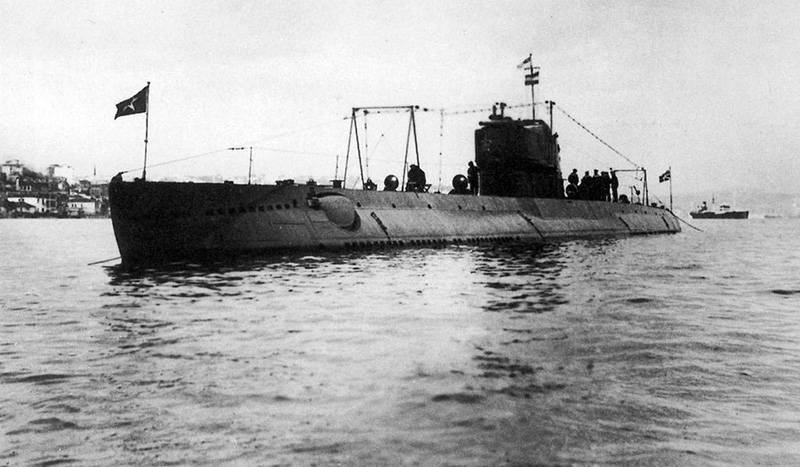 Submarine D-4 "Revolutionary" on a visit to Istanbul in 1933

End of 20's It was marked not only by the first successes in the Soviet shipbuilding, but also by the creation of a number of related industries, in particular, marine diesel engines. For the first Soviet tanker Embaneft laid down in 1925, diesel engines of the Swiss-German concern Sulzer with the power of 1400 hp were used as a ship power plant. But buying engines abroad was expensive, especially since the need for them was quite large. In 1931, the André Marti plant launched production of low-speed diesel engines with 1400 horsepower, as the factory newspaper wrote, “Zulzer system diesel” for standing tankers under the Embaneft project. In 1929, the plant entered the association of enterprises called Sudotrest.

Author:
Denis Brig
Articles from this series:
CSY: foundation and first ships
CSY: development and decline at the beginning of the 20th century
CSY: the first years of Soviet power