Giants at an impasse. We will not see them in the sky 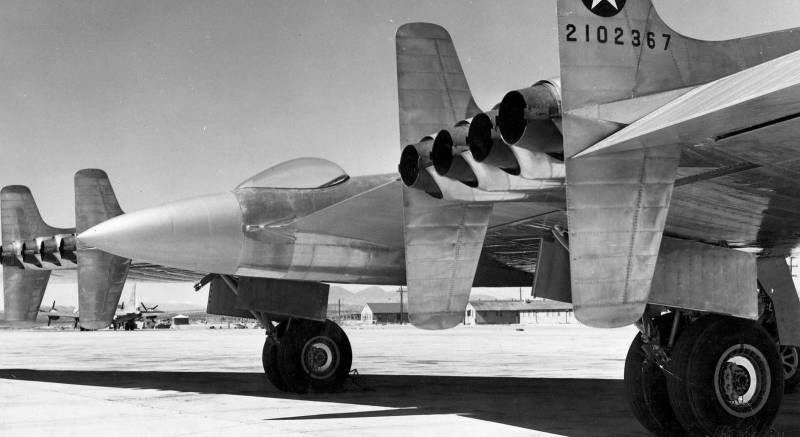 Bombers - the largest, most complex and expensive combat aircraft of its time. After all, delivering deadly cargo to the enemy’s territory is a task that people don’t regret. However, an attempt to introduce even the most ambitious ideas often misfires. Let's look at the monsters, which gave rise to the temporary sleep of the mind of some designers. 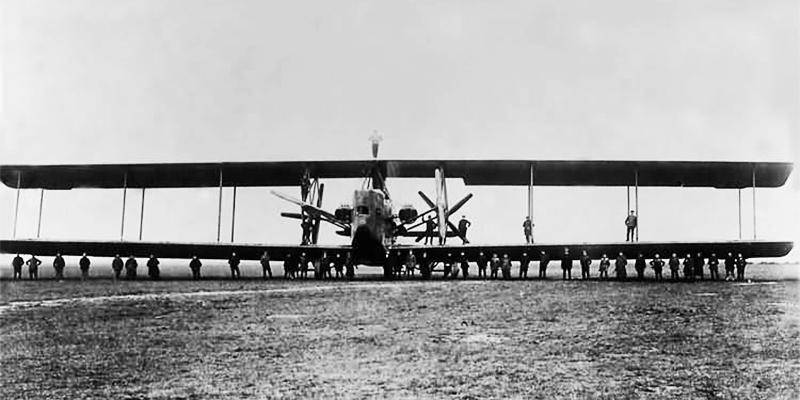 A rare list of crazy engineering creations dispenses with the gloomy Teutonic genius. During the First World War, the Teutons came off with might and main (which is undeservedly forgotten against the background of the Second World War), including in aviation, achieving impressive success in some places. But with the bombers, the Germans at first lagged behind. They relied on the airships of von Zeppelin, while we have created promising "Murom". Finally, the company “Gotha” managed to make successful long-range bombers who participated in massive raids on London.

Germans knocked down the traditional weakness - the inability to stop in time. As a result, in the second half of the war, invaluable resources were spent on super-heavy bombers, the so-called R-plane. This name combines three dozen aircraft of various companies, produced in one or two copies (the most "large-scale" - as many as four).

The crown of the series was Siemens-Schuckert R.VIII - a six-engine monster with a wingspan of 48 meters, the largest aircraft of its time. Ilya Muromets had a range of about 30 meters (depending on the version), and the four-engine Handley Page V / 1500 with a span of 38 meters became the largest bomber of the Entente. But what's the use of giantomania: at the time of the truce, the Germans had only time to make a run through the airfield and break the plane before takeoff because of problems with the power plant. In the future, the Treaty of Versailles banned the development of combat aircraft in Germany and temporarily saved the world from the Teutonic genius. What a pity, because the genius, meanwhile, in the building already had a giant triplane Mannesman-Poll, even more, more terrible! 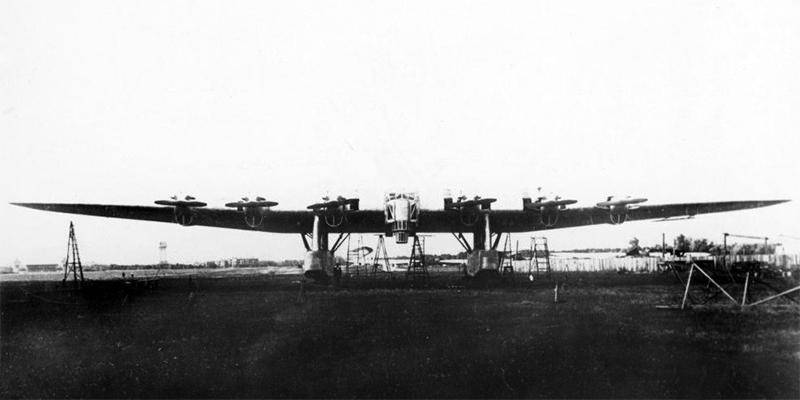 In the interwar period, gigantomania did not pass the USSR. To the extent that for a long time the Soviets were leading in heavy bombing aircraft. And so, designer Konstantin Kalinin creates a shaped monster: a multi-purpose (if you want to carry passengers, if you want loads, if you want bombs) K-7.

The key idea of ​​the project was the movement to the “flying wing” scheme - theoretically the ideal form of the aircraft, in which the basis of the design is a giant wing, and thus the whole aircraft participates in creating lift. In K-7, the thickness (that is, the “height”) of the wing exceeded two meters and was free to go inside. It is even necessary, given that the passengers (up to 128 people) or paratroopers parachutically located there.

K-7 made the first flight of August 21 1933 of the year and became the largest aircraft in the USSR. There were even more in the world, but mostly they were flying boats. Unfortunately, the tests revealed problems with control, serious vibrations, and the disaster happened within three months. The failure strengthened the position of the king of the Soviet aviation, Tupolev, who did not tolerate competitors; the program was curtailed, and Kalinin was executed five years later during the purges in the military-industrial complex. In 1934, the Tupolev raises a huge ANT-20, but that one is much more conservative. 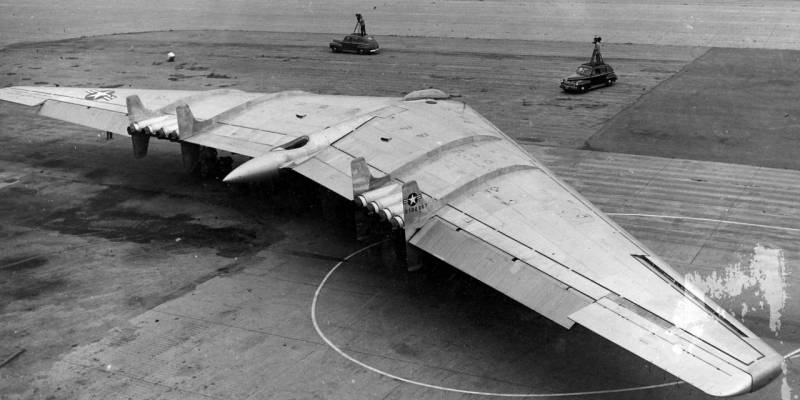 The enthusiasts of the “flying wing” scheme were, of course, not only in the USSR. Perhaps the most prolific and successful was the American aircraft designer John Northrop. He began experimenting with flying wings at the end of the 1920s.

During World War II, monetary rain poured down on American aircraft designers, and Northrop, of course, jumped around. During the war, however, he failed to bring any idea to the serial state. His finest hour came immediately after - in the 1946 year, when a strategic bomber developed at the request of 1941 was embodied in metal, reaching the transatlantic range. The YB-35 was a four-piston piston bomber that was significantly superior to the B-29. On the bomb load - twice!

The time of piston aircraft was gone, and the YB-35 was extremely quickly converted to jet engines, and a year later, YB-49 flew with a little. Due to the gluttony of the new engines, the range and combat load fell, but the flight characteristics improved.

Machines almost went into a small series, but no luck. The end of the war reduced the interest in "creative" developments and chose a more conservative B-36 for implementation. The policy and lobby of competitors also intervened. In addition, there remained a serious problem with the handling, which the “flying wings” could not overcome until it became possible to attract computers to help the pilots. Only after this — and on the basis of a wealth of testing experience — was the modern B-2A created. 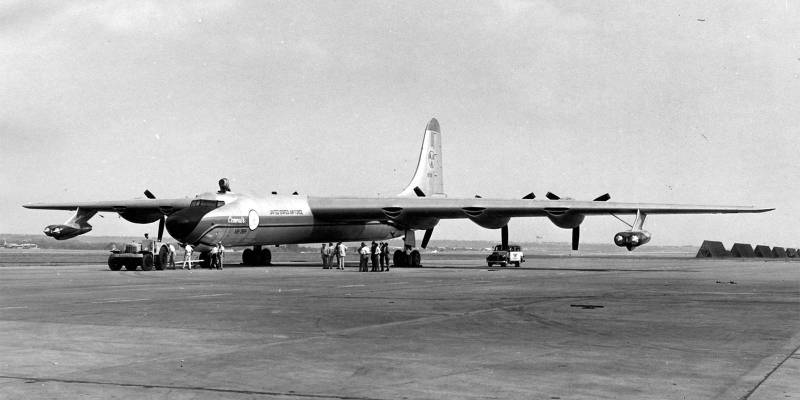 In the first peaceful decade, the military and without the "flying wings" was something to entertain. This is the century of crazy hobby for the atom! So why not make an atomic plane? Such perspectives: at one gas station there is an infinite range, at the airfields even the hangar itself is lit and warmed with free electricity, which has nowhere to go.

Work on the atomic aircraft were carried out in the United States and the USSR. American developments are better known not only because of their greater openness, but also because their flying lab rose five years earlier in the sky.

NB-36H, created on the basis of a B-36H bomber damaged by a hurricane, provided biological protection to the crew (a new, leaded cabin weighed as much as 11 tons) and, yes: it was equipped with the most real ASTR nuclear reactor in a building that produces three megawatts. It would be possible to modify the aircraft for the use of this energy - the benefit of it is propeller. But the Americans decided to just check the operation of the reactor in flight and secure the crew. There was no h / c, but the program turned and the real atomol - the project X-6 with nuclear jet engines - was not built.

In the USSR, the situation was, in general, repeated. The problems of nuclear aircraft consisted in the fact that if you make a conservative design that is as safe as possible, then you end up with something that can barely get off the ground; and if you otzhigat in full, with all sorts of nuclear direct-flow engines, it turns out, to put it mildly, is not environmentally friendly. Well, we must not forget that airplanes from time to time fall, and who wants small, but the real nuclear power plants to fall on it? In addition, the issue with the range almost completely closed the development of refueling in the air. 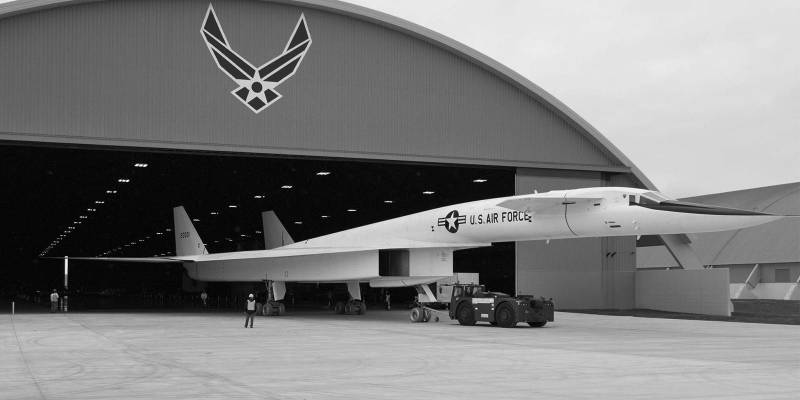 Perhaps it was the “Valkyrie” that became the last truly insane bomber embodied in metal. Even the alien B-2A is, as we just saw, the implementation of old ideas in many ways.

The development program for the super-fast high-altitude bomber, which spawned the B-70, was launched in the middle of the 50-s, when the development of jet aircraft proceeded at an unimaginable pace. In just a quarter of a century, airplanes turned from wooden biplanes with speeds of 300-400 km / h (at best!) Literally into steel “bullets” that significantly exceeded the speed of sound, subdued intercontinental ranges and climbed into the stratosphere. It was a time when people believed that there were no limits to the flight characteristics, but it is worth extending a hand - and here it is, hypersound, aerospace aircraft.

To match the time were ambitions when creating B-70. Suffice it to say that this modification did not fly on kerosene, and not on petroleum products at all. Pentaboran, the most complex and expensive boron hydrogen fuel, served as fuel. It was also, to put it mildly, unhealthy for nature and could spontaneously ignite. The method of its cheap disposal will be invented only in 2000, and the United States will be able to get rid of the accumulated reserves.

Six powerful engines allowed the huge “Valkyrie” (take-off weight almost like the Tu-160) to accelerate to 3,300 km / h and have a practical ceiling of 23 kilometers - incomparable figures, given the size. However, the legions of snow-white ultra-high-speed bombers were not destined to see the light. The cost of both production and operation came out clearly unthinkable. At the same time, ballistic missiles, which were faster and more invulnerable to anti-aircraft missile systems, came to the fore as the means of delivering the nuclear charge. Even before the first flight, the program was transferred to a purely scientific track (to study high-speed flight), but after five years of testing, from 1964 to 1969 a year, it is still closed. 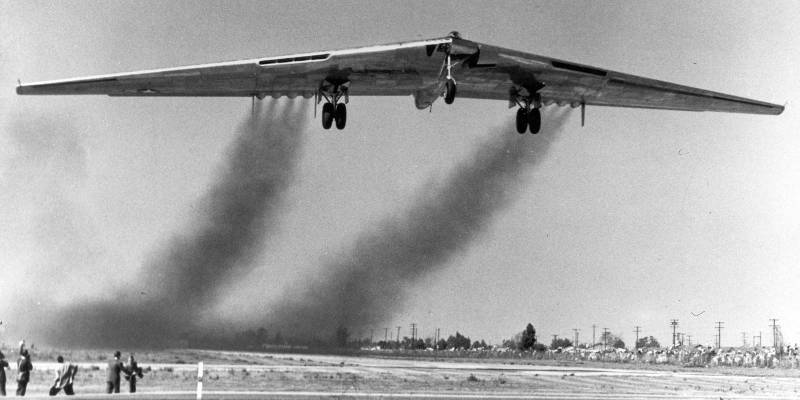 The past aviation age gave us many beautiful, crazy or beautiful planes in their madness. In military aviation, heavy bombers have always been the elite: nimble fighters can make as many turns as possible on an air show, but when they get to the point, they will turn into a retinue, the task of which is to defend the true main characters of their own on the way to the goal.

Payback for strength is the complexity and high cost. Therefore, when the designers were going to do something unusual (in their opinion, of course, also brilliant), they often turned out real monsters, similar to those that we remembered now.

After World War II, money to produce and maintain flotilla only two hegemons began to miss strategic bombers. However, soon they also had to cut costs for new radical ideas. What to go far: in the USA, the basis of the airborne part of the nuclear triad is the B-52H, released (physically, not invented!) In 1961-62. Stand out by their alien B-2A, and size (the largest combat aircraft in stories!) - Tu-160.

But the first, in fact, implements the ideas of 40-ies with the addition of fashionable stealth, just the technique finally allowed to make a flying wing. And the second is a very conservative project compared to those that were worked out during the competition. In our age of pragmatics and information debit with a loan of new "Valkyries" do not have to wait.

Ctrl Enter
Noticed oshЫbku Highlight text and press. Ctrl + Enter
We are
Rotational engine. Dirty warrior ...An-12 in Afghanistan
20 comments
Information
Dear reader, to leave comments on the publication, you must to register.