November 1 2017
24
Foreign-language publications regularly write about Russian weapons and equipment, mainly about the most famous models. Sometimes they turn to less popular technology and make it a kind of advertising. Not so long ago, foreign specialists and amateurs of military equipment had the opportunity to become better acquainted with the newest Russian mobile reconnaissance point PRP-4A "Argus".


The 22 of October, the online magazine of the Analytical Organization Strategic Culture Foundation, published an article by Andrey Akulov “Russia's Argus Armored Vehicle Provides Artillery with Precision Strike Capability” (“The Russian Argus armored vehicle gives artillery an accurate strike”). The international online publication Strategic Culture is known for its loyalty to Russia and has a constant interest in Russian defense developments. This time the subject of such interest was the reconnaissance vehicle PRP-4A.

A. Akulov begins his article with a reminder of fresh the news... According to the latest data, not so long ago, artillery reconnaissance vehicles (or scout vehicles - according to foreign classification) of the PRP-4A "Argus" type were sent to Syria. This technique, which is sometimes referred to as the "all-seeing eye of artillery", is intended for reconnaissance and target acquisition with the subsequent issuance of target designation to gun batteries. "Agrus" can determine the coordinates of the enemy tanks, guns or groups of fighters as soon as they open fire. In addition, a reconnaissance machine using its own weapon, can provoke a return fire and also reveal the location of the enemy. 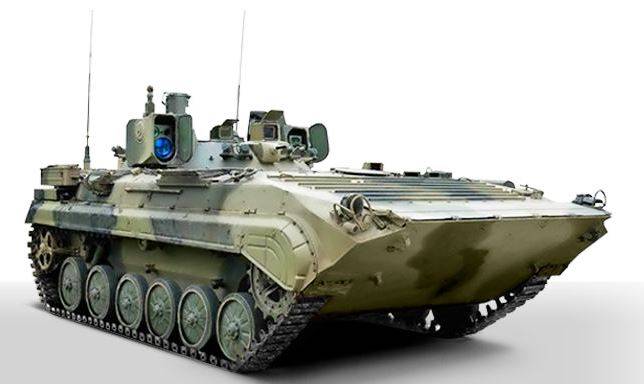 The author indicates part of the characteristics of the Russian technology. Thus, the PRP-4А has a length of 6,7 m, a width of 2,9 m and a height of 2,1 m. The combat weight is 13,8 t. The Argus is operated by a crew of four. The driver, the commander and two operators of reconnaissance equipment work in the habitable volume.

On the road, a reconnaissance vehicle can reach speeds of up to 65 km / h. Water barriers are overcome by swimming at speeds up to 7 km / h. Cruising on the highway - 500 km. PRP-4A can operate at altitudes up to 3000 above sea level, as well as at ambient temperatures up to -40 °. It is able to climb the slope of the 60% (31 °) steepness and move with a heel up to 30% (17 °). The tracked chassis provides a lift on the 70-cm wall and an intersection of a moat 2,2 wide, m. This undercarriage is also used when driving through water.

A. Akulov reminds that the main armament of the Argus is the PKTM machine gun of rifle caliber. This product shows the rate of fire to 800 rounds per minute and is able to use cartridges with bullets of various types: with conventional, tracer, armor-piercing, incendiary, etc. With the help of a machine gun, the crew can attack unprotected targets at ranges up to 1500. In case of an enemy attack, the PRP-4A has some means of protection. For example, a warning system for laser irradiation is used. To protect against relevant threats, it is proposed to use smoke grenade launchers that create an aerosol cloud. Grenade launchers can be used to protect against laser-guided missile systems. Also, the reconnaissance vehicle is equipped with thermal smoke equipment that creates a smoke screen by injecting fuel into the exhaust manifold.

The mobile reconnaissance point has a steel welded hull providing protection against 12,7-mm bullets of large-caliber small arms. Frontal projection also has partial protection from 20-mm projectiles of automatic guns. In addition to armor, the Argus has automatic fire extinguishing equipment and a collective defense system against weapons of mass destruction. For concealed work on the front edge, the machine can be equipped with camouflage nets and heat shields.

PDP-4A carries a developed set of surveillance and intelligence tools. This machine is equipped with a radar station, night vision devices and thermal imagers, as well as modern systems of optical-electronic suppression. Intelligence equipment is associated with navigation, data processing and information transmission devices. Numerous surveillance tools allow the detection of various targets, including those protected by a particular disguise. The complex of reconnaissance equipment is controlled from two operator positions.

Part of the equipment is removable, which allows it to be deployed on the ground, outside the base machine. In this case, the observation post may be located at a distance of 6 km from its armored carrier.

One of the main elements of the special equipment of the Argus reconnaissance vehicle is the 1Л120-1 radar, the antenna of which rises above the tower with the help of a special mast device. This radar is able to monitor the situation at any time of day and in any weather. Information about the objects found can be transferred to the calculations of guns or multiple launch rocket systems. The 1Л120-1 system is able to detect a person standing at a distance of up to 7 km. Tank-type targets can be identified and identified at distances of up to 16 km. In the stowed position, the radar antenna is retracted into its own protected housing.

The scouts also have a periscopic device 1D14-1, which incorporates optical tools and a laser range finder. With it, you can monitor large ground objects at a distance of 10 km. Buildings, hills and other objects of comparable size can be seen from a distance of 25 km. Optical devices also provide search and identification of the target with the calculation of its coordinates and the subsequent transfer of artillery data.

The mobile reconnaissance point PRP-4A "Argus" is built on the basis of the chassis of the infantry fighting vehicle BMP-1. This machine is characterized by high mobility and maneuverability, speed and mobility on highways and on rough terrain. In addition, it is amphibious and is able to overcome water obstacles by swimming. The Argus retains the UTD-20C1 turbocharged diesel engine with a rated horsepower 300. Also, the reconnaissance vehicle is equipped with an auxiliary power unit. Its task is to supply all electrical and electronic systems with the main engine off.

The author of the online magazine Strategic Culture Foundation notes the uniqueness of the concept underlying the draft PDP-4A. So, in the armies of the NATO countries, equipment of this class is simply absent. Instead of specialized self-propelled armored vehicles, the armed forces of the Alliance prefer to use reconnaissance aircraft and unmanned aerial vehicles. Such an approach to the conduct of artillery reconnaissance, as pointed out by A. Akulov, has certain disadvantages.

If the enemy has modern means of electronic warfare, the real effectiveness of aerial reconnaissance and aerial photography can significantly decrease. As a result, the artillery loses target designation and adjustments, which is why it remains "blind." In such a situation, a tracked protected vehicle with the ideology “I see everything, but no one sees me” turns out to be an indispensable tool for organizing high-precision artillery attacks. From this the author makes a curious conclusion. He does not see anything surprising in the fact that the creators of Argus from the research and production corporation Uralvagonzavod received state awards for this project.

The mobile reconnaissance artillery unit of the PDP-4A “Argus” was created just a few years ago, and for certain reasons did not have time to attract the special attention of foreign specialists. However, this technique not only passed the necessary tests, but was put into service with the simultaneous deployment of mass production. Obviously, now foreign-language publications are trying to catch up and are interested in not the newest Russian development.

The Argus project was developed by the design office of the Rubtsovsk machine-building plant, which is part of the Uralvagonzavod corporation. Initially, the PRP-4А was created as an upgraded version of the PDP-4M “Deuterium” serial intelligence officer. The modernization project involved a significant upgrade of the complex of observation, data processing and communications facilities. In addition, the car with the letter "A" received its own complex of optical-electronic suppression. Also in its delivery set includes mounted means of masking: networks and heat shields.

At the beginning of this decade, a new type of experimental equipment was tested, the results of which were put into service, and also became the subject of an order. Production was deployed in the 2012-13 years, and soon the intelligence units of the ground forces received the latest serial equipment. By now, according to the Ministry of Defense, PRP-4А vehicles have been put in formations of all military districts.

The presence of a number of modern radar and optoelectronic systems allows the crew of the Argus to observe and find various objects at significant distances. In addition, the automatic processing of primary data with the transfer of ready information about the goals to consumers in the face of artillery units is provided. From this point of view, the new machine PRP-4А is similar to its predecessors, however, it is more efficient.

A few weeks ago, in mid-October, information about sending at least one Argus car to Syria appeared in open sources. Apparently, the Ministry of Defense plans to test this technique in the face of a real local conflict and establish its actual capabilities. However, any detailed information about the operation of the PDP-4A in the framework of the Syrian conflict is missing, although its goals and objectives are obvious.

For some time, the reconnaissance vehicle PRP-XNUMHA "Argus" has attracted the attention of foreign experts. In terms of popularity, it can not be compared with other modern samples of Russian development, but it is nonetheless of particular interest. The recent dispatch of artillery reconnaissance in Syria spurred the interest of foreign public.