November 2 2017
3
With the establishment of Soviet power, the factory "Naval" began to revive. The ships built during the Russian Empire were completed: the destroyers of the “Ushakovskaya series”, the landing ships of the Elpidifor type. The laying of the first Soviet tanker Embaneft took place. 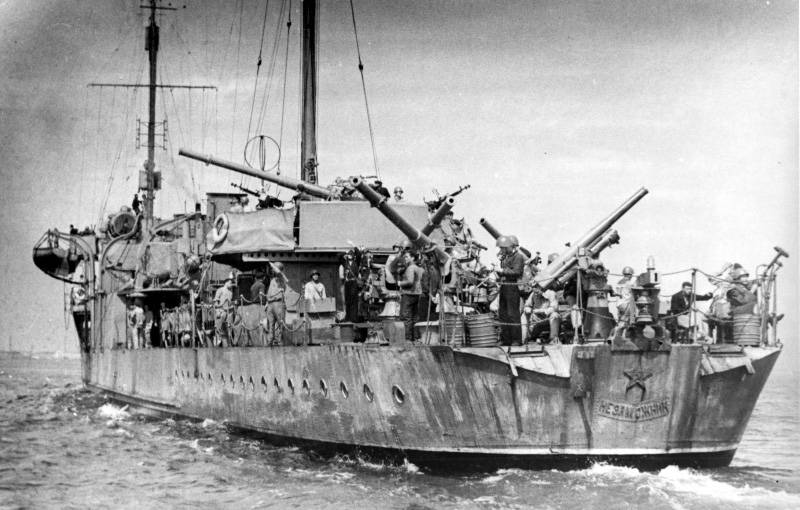 After the Civil War

Beginning of 20's for a country torn by two cruel wars was not easy. Virtually the entire industry inherited from the Russian Empire was either in a deathbed or in a completely muffled state. Stopped factories, factories and mines. A laborious and expensive recovery was required, and some industries had to be created from scratch. The shipbuilding industry did not stand out against the background of others for the better. Nikolaev factories, like many other enterprises, were in desolation.

Some improvement trends began after 1920. Initially, the production of a leisurely reviving enterprise was far from shipbuilding - the plant's capacity was used for much more mundane needs. The plant, which in the old manner was still called “Naval”, was engaged in the repair and commissioning of steam locomotives, railway cars and platforms. The manufacture of industrial goods, which are so necessary for the population, was widely mastered and adjusted: pans, lighters, spoons, and shoe knives. For the village made plowshares, plows and entrenching tools.

In 1922, the plant received a new name, and it was also associated with France. Now it was called "Marty and Badin Nicholas Combined State Plants" in honor of French sailors André Marty and Louis Philip Badin, who served on the Proteus squadron and were among the organizers of unrest on the ships of the French squadron in 1919 during finding her in the Black Sea. Subsequently, Louis Badin withdrew from the communist movement, and in 1924 his name disappeared from the name of the enterprise. In colloquial shipbuilding enterprise began to be called "plant Marty."

In 1921, the first shifts in the revival of the shipbuilding industry began. By that time, the naval forces of Soviet Russia on the Black Sea were in many respects conditional - ships of the once mighty Black Sea fleet either stood at the outbuilding wall, or were disabled by the gentlemen of the former allies, rested at the bottom and rusted in the harbor of distant Bizerta. The fleet had to be re-created, especially since the neighbors of Soviet Russia, despite the change of state system and ideology, did not differ in friendliness, as usual.

Completion of the imperial legacy

Initially, a rational decision was taken to select from the unfinished inheritance of the Russian Empire that which can be completed or restored. In 1921, the then “Naval” began work on the commissioning of two submarines of the project “American Holland” and ships of the type “Elpidifor”.

During World War I, the Russian government ordered 17 submarines from the United States to strengthen its own submarine forces. The boats were assembled in Canada and subsidized by the British concern Vickers. After that, on cargo ships, submarines were transported to Vladivostok, and from there on the Trans-Siberian Railway - to St. Petersburg and Nikolaev. Of the 17 ordered boats, only 11 was delivered to Russia (six of them were delivered to the Black Sea Fleet). In the Russian fleet they were called "AG" - "American Holland". Before the revolution, only AG-21 and AG-22 were brought to a combat-ready state, the rest were at the Naval plant at different stages of assembly. “AG-21” was flooded during the departure of the English from the Crimea, “AG-22” was taken by whites to Bizerte. After the civil war, the "AG-21" was raised and restored. The remaining four boats of the series were completed at the Andrew Marty plant in the 20-ies.

Ships of the type "Elpidifor" were designed on the basis of a cargo schooner for the transportation of grain of the Rostov merchant Elpidifora Paramonov. The schooner transported mainly by sea of ​​Azov and was distinguished by a small draft. At its base was developed a draft amphibious ship, capable of carrying out the landing of about a thousand people on the unequipped coast. The Elpidifors had their own artillery weapons: four 102-mm guns, two 75-mm anti-aircraft guns and two Maxim machine guns, in addition, could take on board the 120 mines. 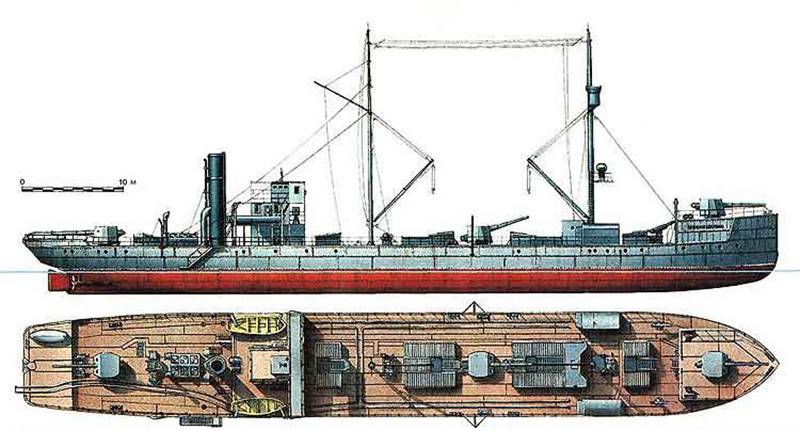 It was planned to build such steamboats at the Russud plant, 20, but the revolution amended these plans. Three head ships under the numbers 410, 411, 412 were brought to combat status. Having changed the flag several times, they became part of the naval forces of the South of Russia and were led away by the Wrangel troops abroad. “Elpidifor-413” and “415” were hastily completed with the help of specialists from “Naval”, after Nikolaev occupied the Red Army units in 1920. No. 413 (later "Red Abkhazia") became part of the Naval Forces of the Black and Azov Seas. "Elpidifor-415" in 1921 was killed in the year attacked by two French destroyers in the Anapa area, jumped ashore, did not recover. 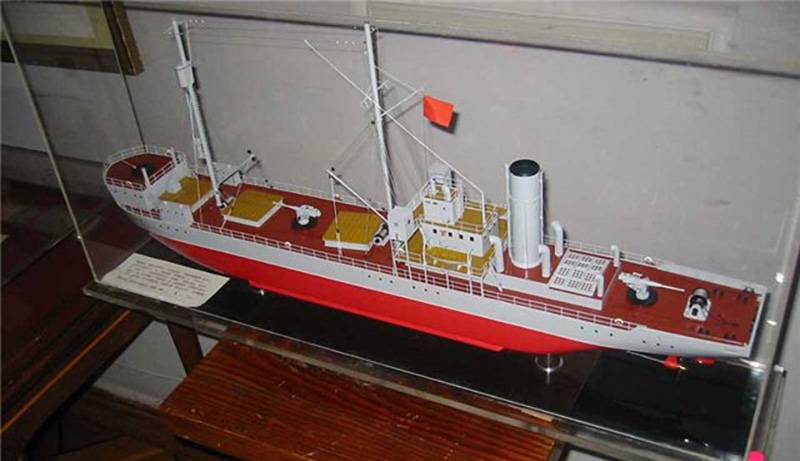 After the end of the civil war, with the wide technical support of Naval (later the André Marti plant), Elpidifors 414, 416 and 417 were introduced into the restoring Black Sea fleet. The 102-mm guns were replaced with the more modern 130-mm 1913 model of the year. Having received their own names instead of faceless numbers (414 - “Red Adjaristan”, 416 - “Red Crimea”, renamed “Red Armenia”, 417 - “Red Georgia”), they all took part in the Great Patriotic War.

The fate of "Ushakovskaya series"

In the conditions of an acute shortage of ships of almost all classes, the destroyers of the “Ushakovskaya series” turned out to be in great demand. The civil war mercilessly went through the Black Sea "Novik". The Fidonisi, Gadzhibey, and Kaliakria, which were commissioned before Russia left the First World War, were sunk in the Tsemessky bay by order of V.I. Lenin.

In the career of the "Naval" battleship "Free Russia", which was recently called the "Empress Catherine the Great", torpedoes fired from the "Kerch" point out. The destroyer Kerch itself was scuttled by its own crew in Tuapse in June 1918. Of the unfinished and remaining ships in Nikolaev, White was able to put into operation only the partially completed destroyer Cerigo, later taken by them to Bizerte. 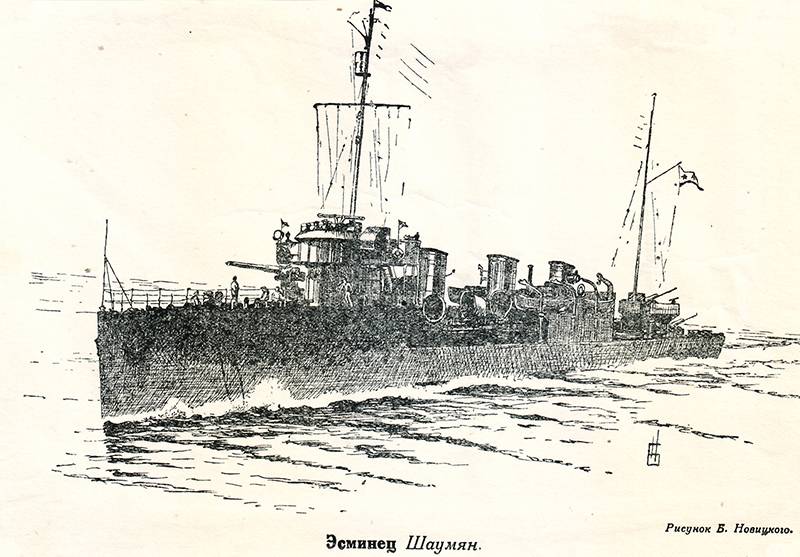 After the end of the Civil War, it was decided to put into operation part of the ships that were in relatively high degree of readiness. The destroyers Zante, Corfu and Levkas were completed at the Andre Marti plant in 1923 and 1925. In accordance with the trends of the new era, the ships were renamed “Independent”, “Petrovsky”, later “Zheleznyakov”, and “Shaumyan”, respectively. The remaining destroyers t. N. The second Ushakovskaya series, which were in low and very low readiness, were dismantled on the stocks.

The Soviet government appreciated the efforts of the factory workers to restore the national economy and the naval forces in the Black Sea. In 1922, a group of workers and specialists of the enterprise was awarded orders. In the same year at the enterprise with the circulation of 20 copies for the first time the newspaper “Gudok Naval” appeared. To improve the state of literacy and improve the cultural and educational level of workers at the factory at the trade union, a library was opened with a considerable book fund for 1200 books at that time. Subsequently, the library of the Black Sea Shipyard became one of the largest and, perhaps, the best technical library of the city. In the best of times, in 1987, its foundation numbered almost 300 thous. Volumes. In 1923, the shipyard began experimental work on the development of electric welding. 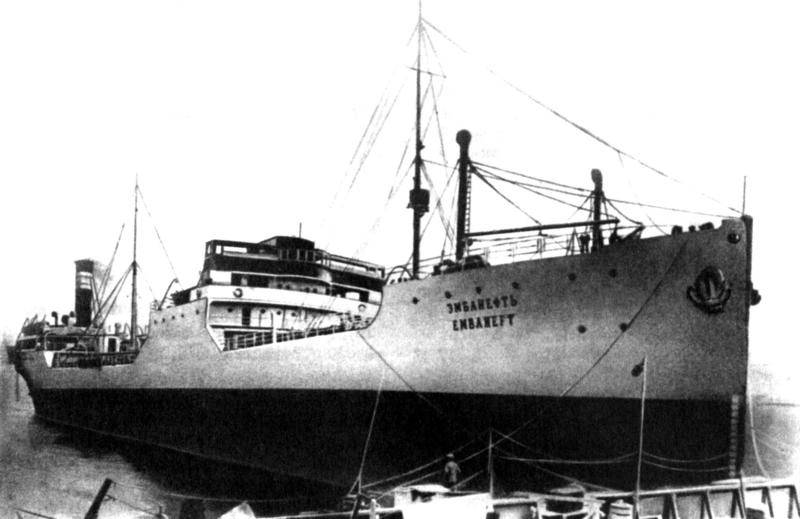 7 November 1925, on the anniversary of the October Revolution, a significant event occurred at the plant. On this day, the first ship of a purely Soviet construction was laid on the stocks No. 1 - the tanker Embaneft. Initially, it was called “Red Nikolaev”, but during construction it was renamed in honor of the oil field in western Kazakhstan.

The tanker had a full displacement in 15800 tons, length reached 137,6 m, width - 17,6 m, draft - 8,4 meter. Two marine diesel engines of the Swiss-German concern “Sulzer” with a capacity of 1400 l were used as a power plant. with., purchased in Germany, which allowed to develop speed in 10 – 11 nodes. Embenfelt 36 was built for months; pneumatic riveting was used for its construction.

According to the Embaneft project, five more tankers were built at the plant. In 1934, the first-born of the Soviet Black Sea shipbuilding was renamed Emba. The tanker took an active part in the Great Patriotic War, in particular in the Kerch-Feodosia landing operation. After January 29, 1942, Emba was damaged in the port of Kamysh-Burun during a German raid aviation, it was towed to Sukhumi, where it was already used as a non-self-propelled floating oil storage.

30 July 1943 German U-24 submarine (from the 30 fleet operating on the Black Sea) under the command of Chief Lieutenant Petersen penetrated the Sukhumi raid and, finding a tanker stationary at anchor, fired two torpedoes at it. From the damage received the ship sank. Subsequently, the hull was partially disassembled for scrap, and partially left at the bottom.

Concluding the conversation about the first tanker built at the factory under Soviet power, it should be noted that this is not the first ship for the transportation of petroleum products created at the enterprise. Back in 1912, the city of Nawal received a large order from the Baku Oil Production Association "G. M. Lianozov and Sons "to build an oil tanker with a displacement of at least 7350 tons. The construction of a large ship, equipped to the same just starting its triumphal march with internal combustion engines, was a new thing.

By that time, Russia had insufficient experience in building ships with such a power plant (Volga Vandal and Sarmat motor ships and a small tanker Delo for the internal Caspian Sea). The order of the Lianozov Corporation provided for the construction of a tanker for long-distance maritime transport. The ship, which was later named Stepan Lianozov, was laid down at the Naval plant in October 1913. It should have had a full displacement of 12 ths. Tons, a length of 127,4 m, a width of 16,5 m and a draft in the full load of 7,7 meters. The power plant of the tanker included two 6-cylinder two-stroke diesel engines manufactured under license from Krupp.

For several reasons, the construction was delayed - the tanker was launched in March 1915, at the height of the First World War. The Black Sea Fleet had a need for tankers, and “Stepan Lianozov” was requisitioned for military needs, renaming it “Baku”. However, this circumstance did not shake the oil empire of Mr. Lianozov and the well-being of its shareholders - the company was paid substantial compensation in connection with the termination of the contract.

The construction of “Baku” was proceeding at a slow pace, and it turned out to be more or less ready for testing only at the end of 1917. The “Baku” standing in Nikolaev went first to the Germans, then to the whites. In tow, the “Gaydamak” icebreaker tanker, whose vehicles were in disrepair, was towed to Bizerte. There, a special French commission, examining the most valuable, in their opinion, ships, requisitioned "Baku" for the needs of its own fleet. Under the French flag, the tanker, renamed the “Loire”, was located until the middle of the 30-s, and then was delivered as an oil barge in Brest. After World War II, the first Russian ocean tanker that experienced many adventures was dismantled for metal. The experience gained during its construction allowed the successful construction of already Soviet tankers of the Embaneft series.

Ctrl Enter
Noticed a mistake Highlight text and press. Ctrl + Enter
We are
"Noviki" Soviet completionService history "Svetlana"
3 comments
Information
Dear reader, to leave comments on the publication, you must to register.