October 30 2017
5
When we talk about Spain, we first of all remember the corrida, the siesta, the rest on the seashore under the scorching sun. The head shows the beauty of Madrid or Barcelona, ​​the images of the civil war, the bulls running through the city streets, unusual paintings of Salvador Dali emerge. That is, any images appear, but mostly as far as possible from industrial production, and even more so the field of aircraft building. However, in this European country, attempts were made to create their own aircraft and helicopters. Two rather curious representatives of the Spanish 1950 helicopter industry were the Aerotecnica AC-12 and Aerotecnica AC-14 models.


The helicopters were created by Aerotecnica SA, opened in Madrid at the beginning of the 1950s. The chief designer of the new company was Frenchman Jean Kantinier, who had previously, working as an engineer for the French concern SNCASO, designed his lightweight single-seat helicopter, designated Matra-Cantinieau MC-101. This helicopter was eventually built in Spain, receiving a new name AC-11 (Aerotecnica-Cantinieau-11). Following the AC-11 helicopter, the first Spanish AC-12 Pepo helicopter was developed; this model differed from its predecessor in a monocoque all-metal fuselage, twin cabin, Lycoming O-360-B2A engine with 170 hp power. and a kind of "dorsal fin." The helicopter chassis was ski. 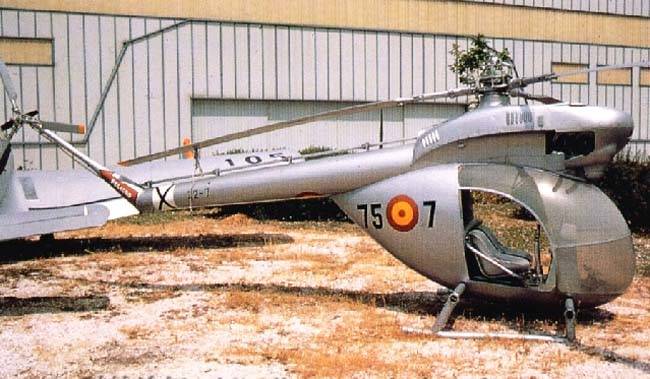 In the cockpit of the helicopter Aerotecnica AC-12 could only accommodate two people - the pilot and passenger. At the same time, due to the rather limited free space inside the helicopter of this model, it was impossible to transport any cargo on it. The power plant of this model consisted of a single 4-cylinder piston aircraft engine Lycoming O-360-B2A, which developed the maximum power 170 hp. Thanks to this engine, the helicopter could accelerate to 140 km / h, while the practical flight range was 230 km, with the installation of additional tanks it increased to 450 km.

According to the plans of the developers, the new helicopter was originally created solely as a civilian aircraft. However, in the end, the helicopter was operated exclusively by the military for its own purposes. This was due to the fact that among private potential customers there was simply no interest in this light helicopter model. 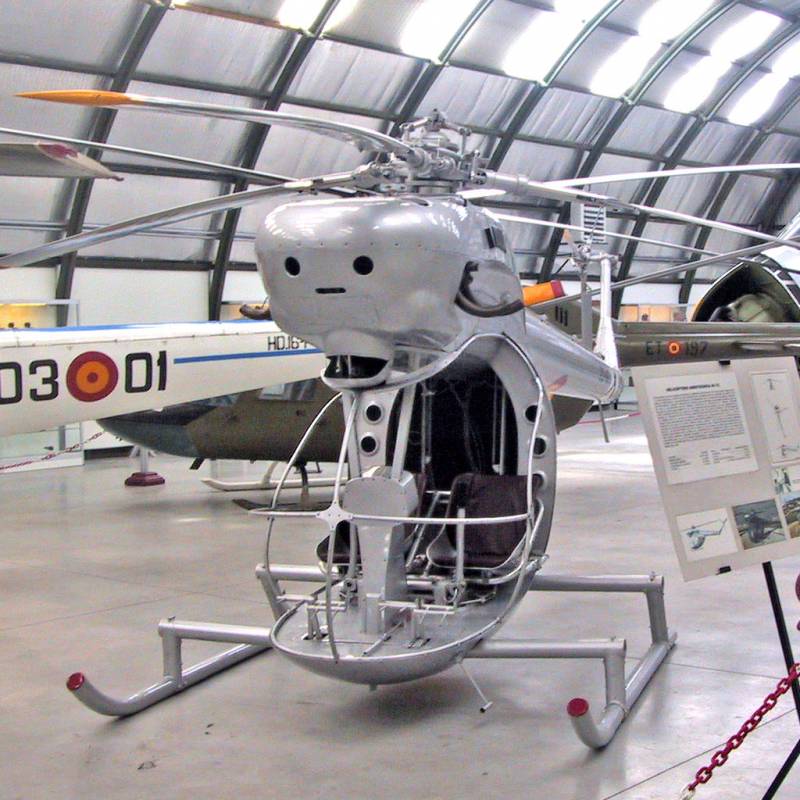 The first flight of the helicopter Aerotecnica AC-12 made 20 July 1954 of the year. Due to the fact that this instance of the aircraft was unable to successfully complete the tests, a second prototype was soon created, which, thanks to the improvements made to the design, was distinguished by better stabilization indicators in flight. Thanks to the improvements made, the helicopter was finally able to safely pass the test phase.

A total of 12 helicopters of this type were assembled in Spain. These were two prototypes and ten serial helicopters. Despite the fact that the developers considered their helicopter promising enough, they were interested only in representatives of the Spanish Air Force. It was the military who exploited all ten serial machines under the designation EC-XZ-2. In the army, they mainly served as patrol cars, air observers, and were used as liaison. Their operation as part of the Air Force did not last long. Already in November, 1964 of the year was replaced by the American Bell 47 helicopters, which by that time had already passed the entire Korean War, so Spain cost three times less than the new AC-12 helicopters. In the same 1964, all Aerotecnica AC-12 helicopters were transferred to INTA (National Institute of Aerospace Engineering), where they were used for various experiments up to the 1967 year, after which they were finally written off. 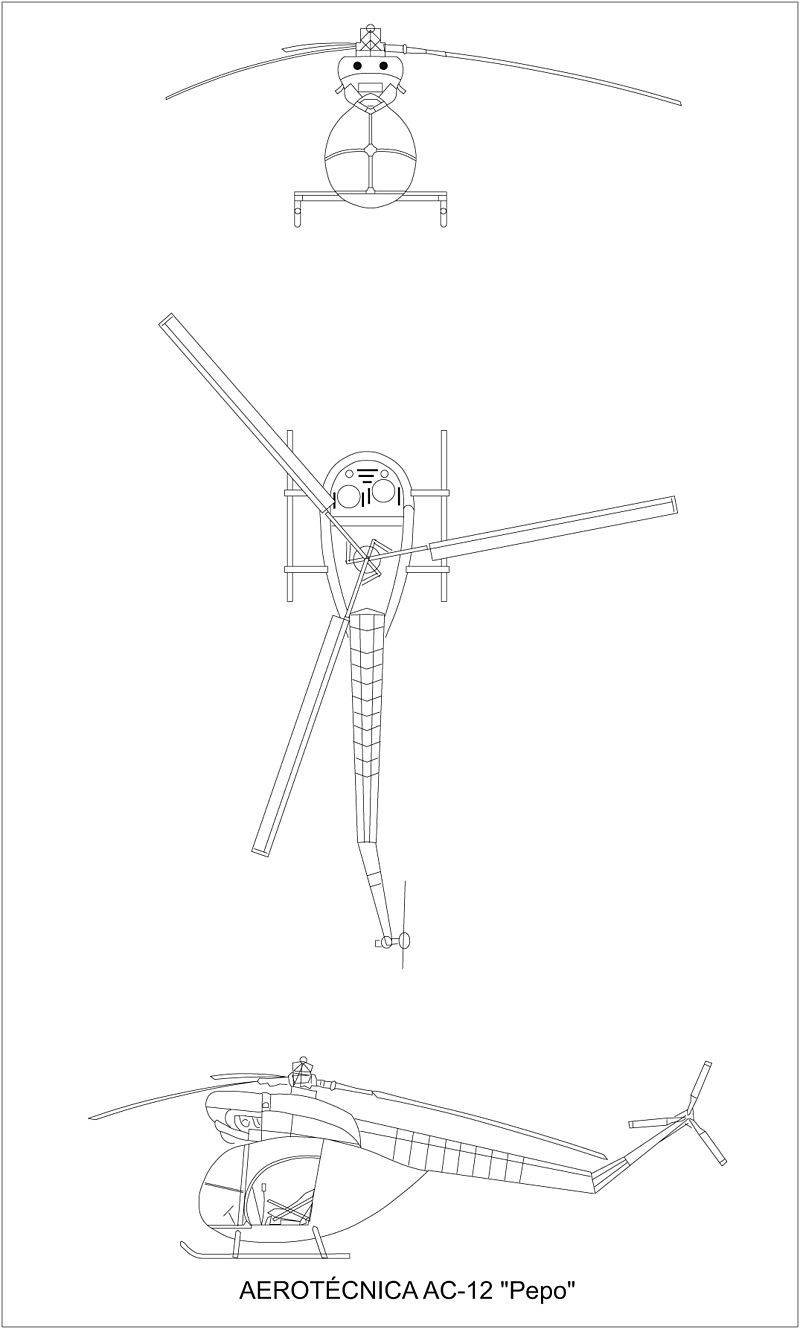 Light multi-purpose helicopter Aerotecnica AC-14 was a further development of its predecessor. Its design began in 1955 on a proactive basis. The Aerotecnica SA design engineers used the Aerotecnica AC-12 helicopter model as a base, which quite successfully proved itself in the Spanish Air Force, although it was not able to please the military with operational effectiveness.

The main difference between the AC-14 model and its predecessor was the increased dimensions. The helicopter added in length and could take on board as far as 5 people (pilot plus 4 passenger), or provided the ability to transport by air small in weight and size of cargo, provided that the maximum take-off weight of the machine would remain within 1350 kg. A number of changes has undergone and the appearance of the helicopter, they allowed to reduce drag during the flight. However, due to the increase in the dimensions of the aircraft, these changes did not have a positive effect on its maneuverability. 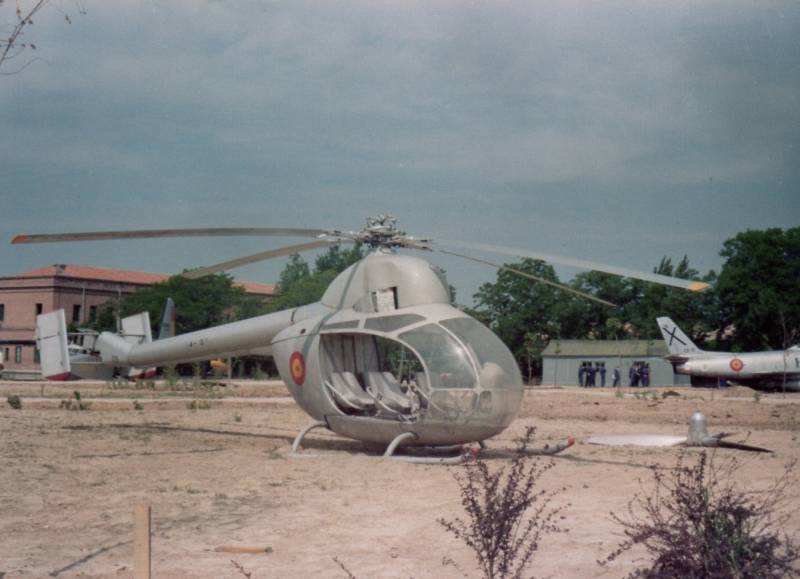 In this case, the helicopter was equipped with a much more powerful turboshaft GTE Turbomeca Artouste IIB1, developed the maximum power 400 HP. Due to the reduction of drag and the new powerful engine, the maximum speed of the heavier vehicle increased to 180 km / h. The practical flight range was 300 km, while the distillation range using additional fuel tanks increased to 640 km.

Distinctive features of the five-seater multipurpose helicopter Aerotecnica AC-14 were the location of the power plant in the upper front part of the cabin and the use of a reactive torque compensation system from the rotor. Instead of the traditional use of the tail rotor on this Spanish helicopter, a system used to divert hot exhaust gases from the gas turbine engine through the tail boom to the nozzle system at the end of the beam was used. At high flight speeds, the jet moment was well compensated by the deflectable rudders located on the keel washers of the tail boom. Much later (in 1990-ies) the development of such a system was called NOTAR (No Tail Rotor - “without tail rotor”).

His first flight of the new Spanish rotary-wing aircraft made in 1957 year. At the same time, the Aerotecnica AC-14 helicopter rather quickly carried out the test program, since by that time Aerotecnica had managed to accumulate sufficient experience in the field of designing and testing aircraft. After successful completion of the tests, the AC-14 helicopter was almost immediately put into serial production. However, despite the qualitative step forward, the demand for these helicopters in Spain turned out to be extremely limited. They were interesting only to the Air Force of the country, which re-acquired only 10 helicopters of this model.

As before, the Aerotecnica AC-14 light multipurpose helicopter could be used with both open and closed cockpits. At the same time, the layout variant with a closed cabin was naturally the most popular. This was mainly due to the maximum airspeed of 180 km / h. At this speed, the pilot and passengers of the rotorcraft in the open cockpit felt obvious discomfort, especially if it was a question of long-distance flights. 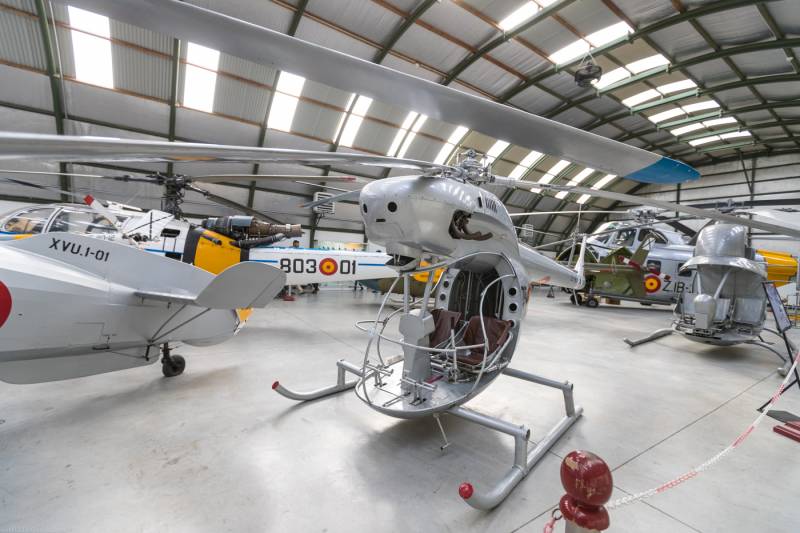 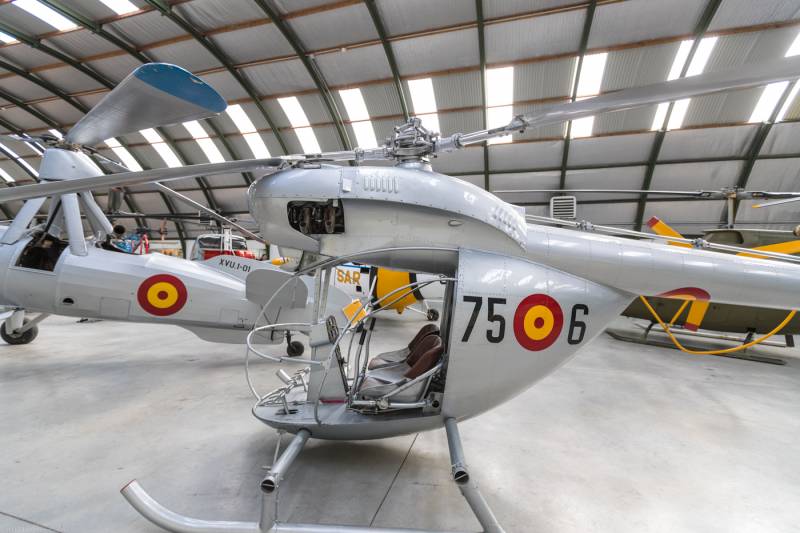 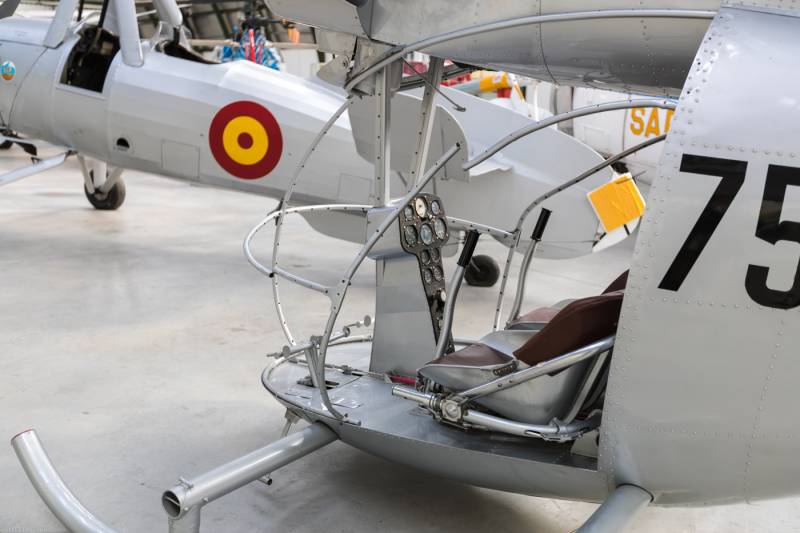 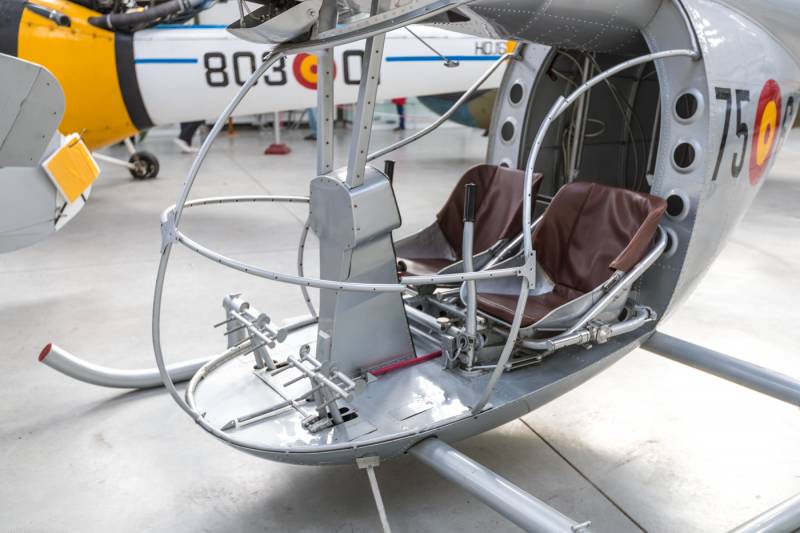 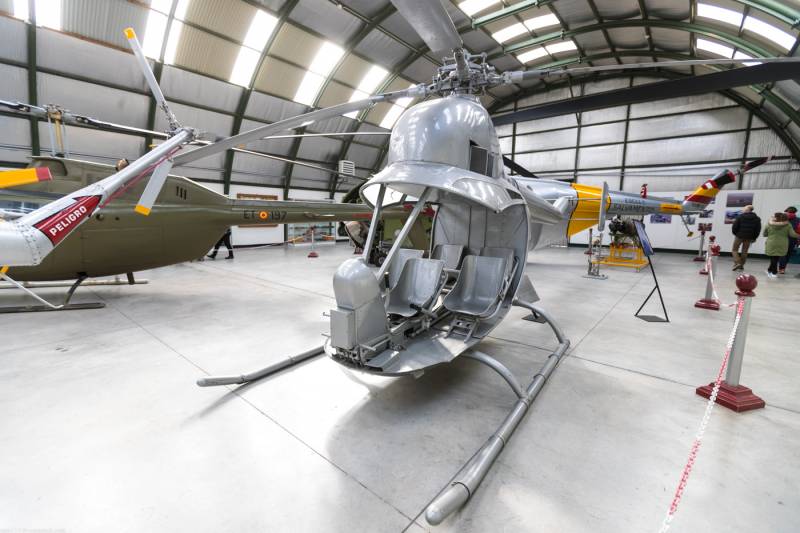 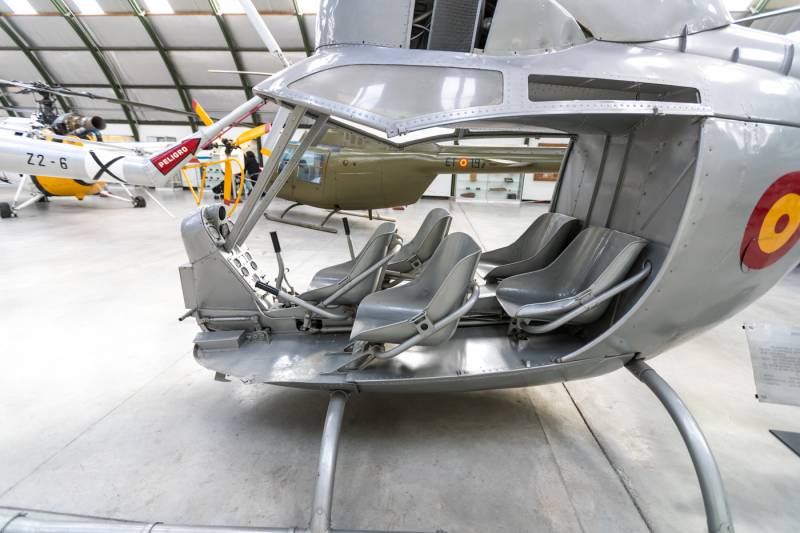 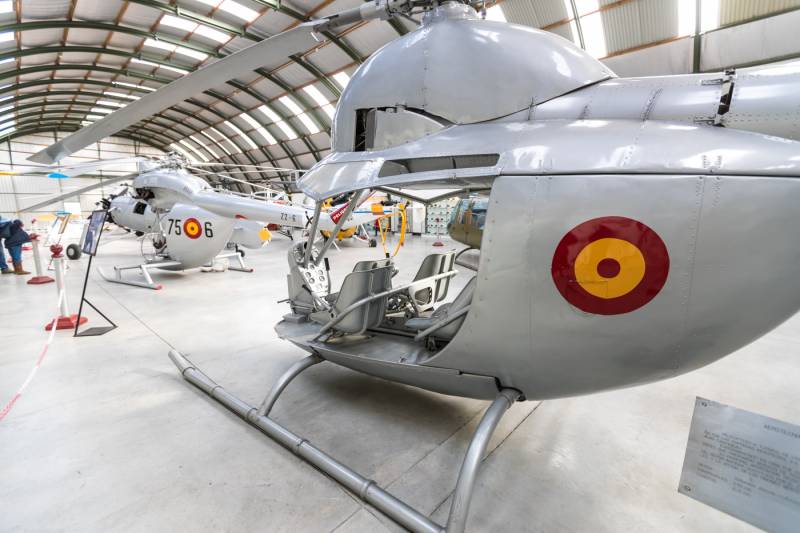 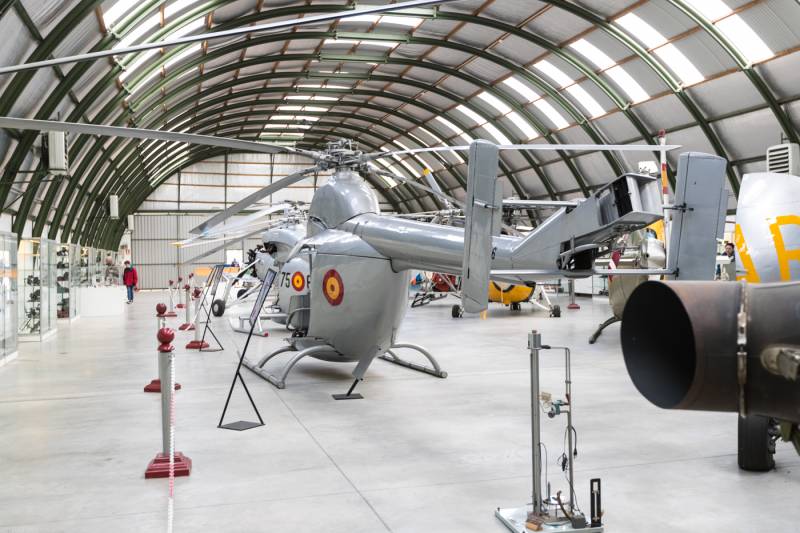 Ctrl Enter
Noticed a mistake Highlight text and press. Ctrl + Enter
We are
Civil Defense Day. Emergency forces are always ready to helpUltra lightweight high-speed helicopter Afalina is presented in Russia
5 comments
Information
Dear reader, to leave comments on the publication, you must to register.