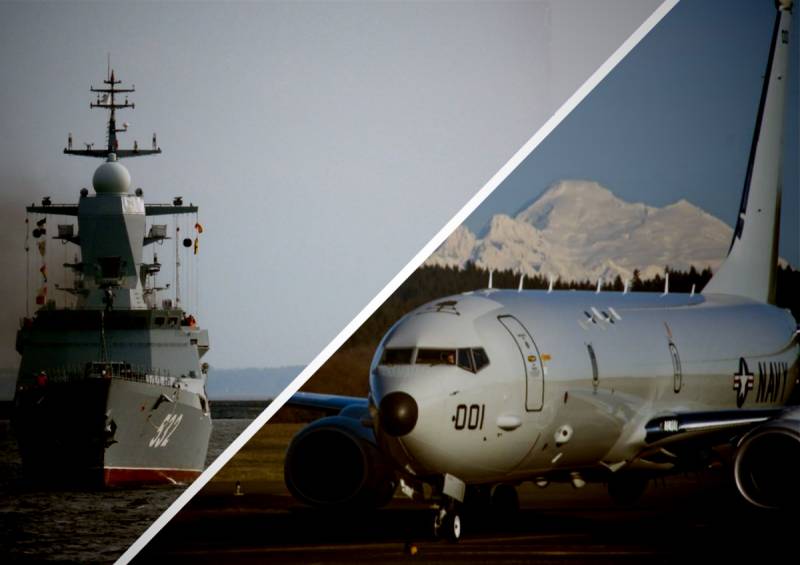 The most popular British and American mass media, as well as our eminent ones, are unlikely to tell about this. news TV channels, because most of the events are likely to be behind a screen of suspense and will not be disclosed. But we will try to consider the event in more detail, relying on the operational and strategic situation in the North Atlantic region, where a number of large-scale conflicts between the Russian Federation and NATO can be played out in the foreseeable future both on the basis of the transformation of the existing “Baltic tension” into a military confrontation, and because of the beginning “ Arctic Race ”for control over vast areas of the continental shelf in the Arctic Ocean. We are talking about the Atlantic campaign of the Baltic naval strike group, which began on Saturday, October 14 fleet The Russian Navy as a part of two improved project 20380 corvettes (Soobrazitelny with w / n 531 and “Boyky” with w / n 532) and one medium-sized sea tanker, project 160 “Kola”, with the goal of demonstrating the St. Andrew flag in different parts of the Atlantic Ocean. The campaign was announced by BF representative Roman Martov.

At first glance, the grouping tasks voiced by Roman Martov will be quite standard for this type of campaign and will be limited to conducting anti-submarine and anti-aircraft training operations against conditional submarine and air enemy, as well as actions to replenish stocks in the oceanic theater of operations. Corvette is equipped with shipboard anti-aircraft missile systems "Redut"; 3 to 4 km depending on the trajectory); the latter are capable of intercepting maneuvering ballistic objects by the kinetic “hit-to-kill” method and various low-altitude EAS. Anti-ship tasks are assigned to the 3K97 "Uranus" complex, presented by 12x48 KT-9 launchers with X-100У anti-ship missiles. Anti-submarine operations are performed by a compact 12-mm package-NK torpedo complex, designed to defend against enemy submarines in the 15 km radius and from torpedoes - in the 12 radius.

Despite the fact that such an arsenal of our miniature CBG is negligible compared to the number of NATO anti-ship assets in the North Atlantic, this is only the tip of the iceberg, where the basic means and tasks are hidden “under water” in the direct and figurative sense. As you already understood, our two corvettes and a tanker will operate in the Atlantic not alone, but under reliable cover carrying the regular combat duty of the submarine component of the Northern Fleet of the Russian Navy. It is on the last in this game of cat and mouse will be assigned the main range of complex tasks.

The first thing that will form the basis of the above tasks is the complete exclusion of the opening of one’s own location through enemy sonar, radar and magnetic equipment (RSL, active-passive sonar systems on enemy ships and submarines, as well as magnetic anomaly sensors on anti-submarine aircraft). Deeply improved modifications of the MAPL of the 971 K-328 Leopard and K-154 Tiger (Improved Akula) K-157 Vepr (Akula-II and K-335 Gepard) have similar stealth indicators. ("Akula-III"). Indicators of acoustic visibility in the first two versions of these torpedo-impact submarine cruisers almost correspond to the upgraded Los Angeles-class submarines, equipped with low-noise type propellers. The noise coefficient of the “Tiger” and “Wild boar” is about 4 - 5 is less in comparison with the early project 671РТМК “Schuka”. The noise of the K-335 “Cheetah” submarine (an upgraded version with the NATO nickname “Akula-III”) is even lower and is at the level of the multi-purpose atomic submarines of 885 / M Yassen-M and the early Virginia “blocks” ; This is achieved thanks to a perfect two-frame beam-type construction, where all mechanical components (OK-650.01 steam generating installation, OK-9BM single-shaft steam turbine installation, main circular pumps, etc.) are located on the damping frames and platforms, also called stack frames.

What does this mean in relation to the current approach of our Central Command of the Baltic Fleet to the North Atlantic? Taking into account the fact that by the time our CUG maneuvers began, the Icelandic minimum, which causes the appearance of a large number of cyclones and the complex hydrological situation, will have a maximum effect on the region, it will be extremely difficult to detect the low-noise Shchuk-B using NATO acoustic equipment. Such hull nose hydroacoustic complexes as AN / BQQ-10, as well as onboard wide-aperture passive AN / BQG-5A (installed on Virginia-class submarines) will be able to track the K-335 “Gepard” at a distance of about 35 - 40 km with excellent hydrological conditions, as well as if the speed of the “Pike-B” will be slightly higher than the 7-8 nodes. In our case, the Pike-B guarding corvettes (or one submarine) will “sneak” through the waters of the North Atlantic at 4-5 nodes speed, making it almost impossible to detect them. In addition to covering our Corresponding Corvette and Boyky corvettes, the acoustic reconnaissance of modern NATO naval submarines will undoubtedly be included in the list of tasks of the atomic submarines of the Northern Fleet.

The British National Astute-class multipurpose nuclear-powered submarines are of the greatest interest to the Russian Navy command. It is these submarines that will become the main submarine component of the “A2 / AD” zone, which will be formed in the Norwegian and North Seas in the event of an escalation of the conflict in the North Atlantic region. “Estyut”, released on duty from naval bases in Scotland, will be able to quickly increase their presence anywhere in the North Atlantic, in contrast to the US “Virginia”. Also, obtaining information about the acoustic profile of these submarines is important because of their future participation in the “Arctic race”, where London claims to have a very decent underwater jackpot in the Arctic region. This is evidenced by a publication provided by 10 on April 2016, the British edition of The Sunday Times, citing the command of the Royal Navy of the United Kingdom, which reports on the imminent resumption of combat duty of British nuclear submarines in the Arctic Ocean. The Astute class MAPL, developed by BAE Systems concern, is one of the most modern western attack nuclear submarine cruisers on a par with the French Barracuda class submarines and the American Virginia submarines under construction. Compared to the latter, the class "Estujt" is characterized by the presence of the most powerful rocket and torpedo arsenal of 38 rocket "Tomahawk" and torpedoes "Spearfish", used from 6 nasal 533-mm torpedo tubes (in a different ratio depending on the operation).

In fact, any of the Astute class MAPLs is capable of reaching the launch lines of the 40 SCS UGM-109E “Tomahawk Block IV” from the Barents Sea in all cities of central Russia. It is for this reason that it is extremely important to carefully study all the known physical fields of submarines of this class for easier and more successful search for and destruction of them on the distant approaches to our sea borders. Nevertheless, such acoustic reconnaissance cannot be attributed to the category of light tasks, because despite the small maximum depth of immersion in 300 - 350 m (“Pike-B” can dive on 600 m), “Estuyt” has worthy indicators of acoustic secrecy, which practically not inferior to the first modifications of the "Virginia" and "Akula-II". In particular, the submarines are equipped with modern "quiet" water-jet propulsion from the company "Rolls-Royce", and the design of the power plant provides all the noise reduction and anti-vibration options used on most well-known submarines, including the "Shuku-B". The steam generator, steam turbine installation, turbine generators, rocket-torpedo / mine weapon supply mechanisms for torpedo tubes and other units are installed on specialized shock-absorbing platforms that reduce noise to 55 - 65 dB. The hull of the submarine is covered with a specialized sound-absorbing envelope. However, even in this case, the crews of our Shchuka-B class submarines can “feel” the acoustic signature “Astute”. To do this, they have at their disposal a unique high-energy sonar complex МГК-540 “Skat-3” with fully digitized computing facilities, as well as an information processing and display interface.

The complex is represented by a powerful nasal hydroacoustic station with a cylindrical phased acoustic grill based on more than 5 hundreds of hydrophones, as well as extended on-board high-sensitivity power systems of high sensitivity providing the 971 Shchuka-B aerial azimuth zone of reliable review in 260 - 300 degrees. Complements the capabilities of the complex low-frequency gas "Skat-3" with a flexible long towed antenna, located in the OLV gondola on the tail vertical stabilizer. MGK-540 "Skat-3" has the highest sensitivity and hardware-software filters for selection of real noise from underwater and surface facilities against the background of various acoustic anomalies. Due to this, the direction finding range of underwater targets (under the most favorable hydrological conditions) can reach 220-230 km (the third zone of acoustic illumination, replete with significant fluctuations). Similar detecting qualities are possessed by strategic missile submarine cruisers of the Borey Ave. 955, equipped with a similar MGK-600B Irtysh-Amfora-B hydroacoustic complex. This is comparable to the Type 2076 hydroacoustic complex of the Astute submarines, which is represented by more than 13000 hydrophones. 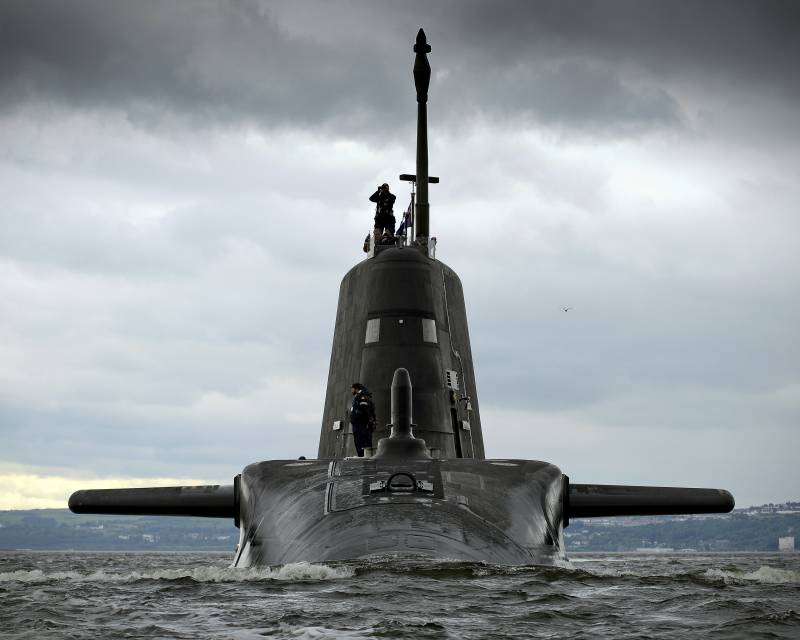 In addition to the GCK-540 “Skat-3”, “Pike-B” carries on board a lot of additional hydroacoustic stations, including: GAS fixing the start of cavitation of MG-512 “Vint-M” propellers, GAS of determining underwater sound speed MG- 543 "Reflector", as well as the GAS search for bottom and anchor mines MG-519 "Arfa-M". And, despite the fact that long-range anti-submarine aircraft P-8A "Poseidon" operated by the US Navy for over 4 years, and several sides are tested from the American airfield Navy Jacksonville (Florida) for further transmission of the British Air Force, none of the machines could not monitor the insidious waters of the North Atlantic for the presence of our low-noise attack submarines off the coast of the United Kingdom, the United States or Norway. Very soon, the Shchuk-B in such Atlantic campaigns will be joined by the underwater attack cruisers of the 4 th generation of the 885 Yapen Ave. and 885M Yasen-M, which will eventually make NATO AUG in the Atlantic Ocean defenseless against the “disarming "Anti-ship strike even a pair of such submarines."

Ctrl Enter
Noticed oshЫbku Highlight text and press. Ctrl + Enter
We are
Our shelfArctic pie: a lot of pieces, but not enough for everyone
Military Reviewin Yandex News
Military Reviewin Google News
56 comments
Information
Dear reader, to leave comments on the publication, you must to register.