October 19 2017
70
In the foreseeable future, the leading countries of the world will have to adopt the first shock systems with hypersonic missiles. So far weapon is at the stage of development and testing, but this may be a cause for concern from a potential adversary. As a result, the military, specialists, the press and the general public show great interest in hypersonic topics, as well as trying to predict the consequences of the emergence of a new weapon.


A few days ago, the topic of hypersonic shock systems was again raised by the US online publication War Is Boring. On October 11, it published an article by Robert Beckhasen “Imagine Almost Every Russian Warship With Hypersonic Missiles” (“Imagine that almost all Russian ships carry hypersonic rockets”). The material, referred to as “air” and “sea”, examines the current successes of the Russian industry in the field of hypersonic technologies, and also tries to predict further developments in this area.

The subheading of the article is a thesis about the approaches to the creation of a new weapon: the Kremlin is developing a Zircon rocket, taking into account the interoperability with existing ships.

At the beginning of his article, R. Beckhasen recalls current Russian developments and possible events in the near future. If everything goes in accordance with the existing plans, then, as he writes, already in the middle of the next decade, the navy of Russia will adopt the promising hypersonic anti-ship rocket “Zircon”. A rocket with a hypersonic ramjet engine can reach speeds of order M = 5. According to the author, this product will differ not only high speed, but also maneuverability.

R. Beckhasen also reminded readers of the principles of operation of hypersonic direct-flow rocket engines. Such a power plant must be turned on at sufficiently high flight speeds obtained using a solid-fuel or other accelerating engine. While moving in the atmosphere, the engine intake device captures air that already has a high relative speed, and then uses it to burn fuel. Created thrust allows the rocket to reach speeds that are not available when using other types of power plants.

The author points out that when flying at hypersonic speeds, the rocket design is subjected to various loads. Thus, when designing such products, it is necessary to take into account the heat from the incident flow and its mechanical effect. It is the overcoming of the problems associated with flying at speeds around M = 5 that is one of the main tasks of all promising projects.

If Russian scientists and designers succeed in overcoming all the difficulties and solving the most complicated tasks associated with a hypersonic flight, then Russia will have one of the most deadly and effective anti-ship missiles in the world. According to known data, in April 2017, the Russian industry conducted several test launches of the Zircon rocket. It was argued that during these flights experienced products could reach speeds of eight times the speed of sound. R. Beckhasen believes that such estimates exaggerate real achievements. However, despite this, Russia is still capable of making excellent missiles. In this area, at least, it is not inferior to foreign countries or even surpasses them.

Known data show that it took about ten years for Russia to create a promising Zirkon rocket - from the start of operations to the proposed adoption of weapons.

The author of War Is Boring believes that the newest Russian rocket will have a range of about 500-640 miles - from 800 to 1000 km. Thus, the product "Zircon" will be able to fly almost three times farther than the most advanced anti-ship missile of the American Harpoon family. Thus, the latest products of this series, built on the projects of AGM-84H / K, are capable of attacking a target at a distance of only 280 km. Given this ratio of characteristics, it should not be surprising that the United States is currently trying to develop a new long-range supersonic anti-ship missile system that can replace not the most sophisticated Harpoons.

R. Beckhasen claims that the Zircon rocket will be able to deliver a combat unit with a mass of 650 pounds (less than 300 kg) to the target. The specific appearance of the product will reduce its signature and reduce visibility for radar surveillance systems. Thanks to this, a new type of anti-ship weapon will be extremely difficult to detect and intercept in time.

The author notes: Russian media are submitting a Zircon rocket as completely invulnerable to air defense or missile defense systems. However, we can partly agree with this thesis, since the hypersonic maneuverable rocket really represents a serious threat to the ships of a potential enemy.

In a recent study, Californian think tank RAND Corporation described the threats associated with the emergence of hypersonic missiles. According to experts of this organization, hypersonic speed and high maneuverability will allow the rocket to penetrate any missile defense. In addition, such weapons significantly increase the response time requirements of protective systems. 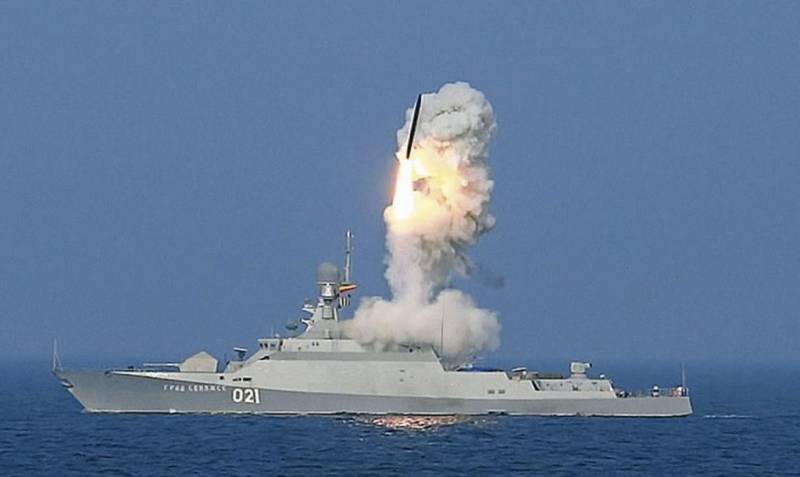 Studying the available information about the Zircon project, the American author draws attention to the launcher of a promising rocket - one of the most important moments of the entire strike complex.

Modern warships are equipped with universal vertical launchers for missiles of various types. Such systems are distinguished by small volumes that limit the size of the launched missiles. For hypothetical hypersonic missiles, apparently, starting cells of increased depth are required, which is why the development of a completely new launcher is required. At the same time, however, Russian specialists create the Zirkon anti-ship missiles, taking into account the limitations of the existing 3C-14 launcher. Such a system is already being used for firing by Onyx anti-ship missiles and products of all modifications of the Caliber family.

This fact turns out to be bad. news for the United States Navy. The Russian Navy orders the installation of 3C-14 launchers for almost all new ships. Both small corvettes and heavy cruisers become carriers of this weapon.

The OE Watch, published monthly by the US Army’s Foreign Military Studies Office, has recently raised similar issues in its regular publication. Its authors, quoted by War Is Boring, have concluded that most modern Russian submarines, cruisers, destroyers, and even corvettes will be able to use Onyx, Caliber and Zircon missiles. Such capabilities of the Russian Navy are an example of the implementation of current modularity principles and ensuring interoperability.

Specialists at the US Army's Foreign Military Studies Office believe that such features of the development of the Russian fleet associated primarily with the economy. The Soviet Union had the largest navy, with its ships and submarines having a clear specialization. Russia now does not need such a Navy, and in addition, considers it necessary to build multi-purpose ships. This allows you to get the most out of each invested ruble. In addition, a fleet interaction system was built with some elements of the ground forces and aerospace forces.

After reviewing the current state of affairs and examining advanced weapons, Robert Beckhasen made an interesting conclusion. He believes that the Russian Navy - even if it is merely a coastal defense force - looks quite impressive.

The 3М22 “Zircon” anti-ship missile from the 3K22 complex is one of the most interesting and ambitious, but at the same time, secret modern developments of the Russian defense industry. Some information about the work on hypersonic topics appeared over the years, but only relatively recently it became known about the creation of a full-fledged missile system designed to attack enemy ships.

For obvious reasons, most of the information on the Zircon complex has not yet been announced, which is why, in particular, specialists and the public have to rely on fragmentary information and various assessments. For example, information about the flight speed to M = 8 was obtained by the Russian press from unofficial sources. However, even the most general information about the Zircon project makes it possible to draw approximate conclusions about the consequences of its appearance and adoption. 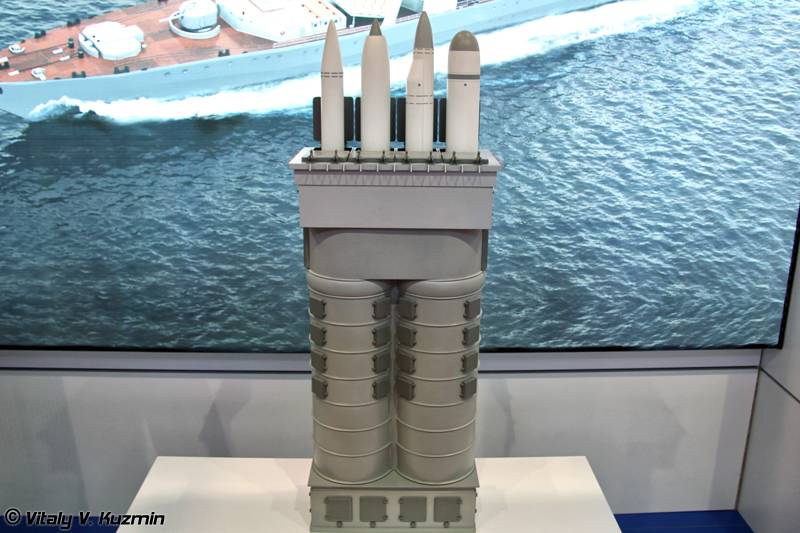 It is known that the 3М22 rocket will be used together with the 3С-14 launchers placed on domestic ships of various projects. This feature of the weapon allows you to roughly estimate its dimensions. Obviously, the rocket will receive a booster engine for outputting at supersonic speeds at which a sustained propulsion power unit can be launched. Information about the guidance systems and warheads are not available. At the same time, it can be assumed that a huge flight speed will make it possible to completely abandon the warhead, using only the rocket’s kinetic energy to hit the target.

The first reports of the test launches of the Zircon anti-ship missiles appeared in the early spring of last year. Over the next few months, no new project progress information was received. At the end of this winter, it became known about the imminent continuation of the tests, including with the shooting from the sea stand. In mid-spring, Russian media reported on the conduct of regular flight tests.

Also in April, unofficial information was published, according to which the mass production of Zirkon missiles will start this year. On 2018, the adoption of the 3K22 complex is planned. After that, the deployment of missiles and other facilities of the complex on existing and under construction ships will begin.

As rightly noted by Robert Beckhasen in his article for War Is Boring, carriers of Zircons, as well as Onyxes and Gauges, can become the most diverse surface ships of the Russian Navy. A significant number of ships of all major classes carry vertical launchers 3C-14, which can ensure their compatibility with products 3М22.

The consequences of adopting “Zircon” into service are obvious and have been repeatedly revealed in numerous publications of the domestic and foreign press, including the recent article “Imagine Almost Russian Warship With Hypersonic Missiles”. The Russian fleet will receive a unique shock system capable of solving its main tasks with the highest efficiency. At present and in the near future, the probability of successful interception of hypersonic anti-ship missiles by enemy air defense systems is quite small, so that the naval ships will have a decisive advantage over the ship groups of all other countries.

It is obvious that foreign military will not be idle, and will try to answer the new challenge in the form of a Zircon rocket. Nevertheless, it will take time, during which the Russian fleet will have time to deploy a certain number of new missiles. As a result of this, the title of a recent article “Imagine that almost all Russian ships carry hypersonic rockets” already sounds very ominous.

Ctrl Enter
Noticed oshЫbku Highlight text and press. Ctrl + Enter
We are
At the first spaceAn-12 in Afghanistan
Military Reviewin Yandex News
Military Reviewin Google News
70 comments
Information
Dear reader, to leave comments on the publication, you must to register.