The best commercials of the army: Ukrainians and Estonians turned out to be the funniest of all 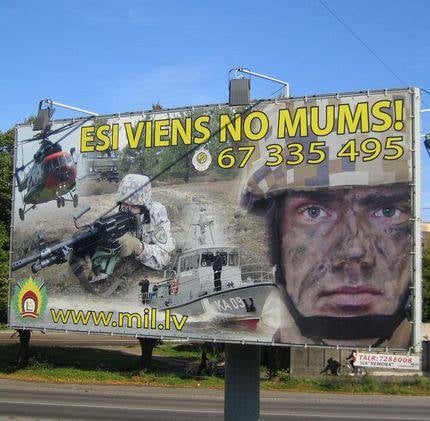 The defense departments of different countries of the world are looking for their own approach in order to make service in the army attractive for young people in commercials. Some are limited to a demonstration of military power, others resort to showing the difficulties of military life that only a real man can overcome. And, for example, Ukraine and Estonia decided that a humorous approach would be best.

The Foreign Policy Edition has collected the best videos on the YouTube server, which advertised military service.

The Russian army is advertising the video for the song by Alexander Buinov. The popular Russian singer in the form of "blue berets" performs an incendiary song with refrain: "Glory to the landing party, honor and praise!", While the background of the airborne troops are held in the background. The video was filmed five years ago. As noted on the site of the singer, at the same time, Colonel-General Alexander Kolmakov, who served as commander of the Airborne Forces, presented the singer with a commemorative medal for the 75 anniversary of this kind of troops.

It should be noted that the Ministry of Defense of the Russian Federation believes that in order to make the military service attractive, the army must be comprehensively developed, trained and pumped up "demobilization" to advertise the army. Conscripts are also seduced by promises to introduce a "quiet hour" in the afternoon.

The most cheerful and simple, calculated, probably, on simple Ukrainian guys, can be considered the video of the Ministry of Defense of Ukraine with the promise: "All the girls will be yours." In it, to the melody of the song "Black Boomer", the driver of the MedCodess on the outskirts of the village hugs a bunch of long-legged beauties. Girls, he promises to ride them on a foreign car. But here in a cloud of dust the armored personnel carrier unexpectedly appears, from which an attractive soldier comes out in a vest. With a winking eye and a smile, he says that he really wants to "drink some water". All the girls immediately rush from the driver "boomer" to him, carry water in a clay jug and run for the retreating armored personnel carrier. Video advertises service contract.

As the newspaper notes, but the real winner can be the video clip of the Swedish Ministry of Defense, in which young women are tempted to serve in the army as an alternative to routine and unpleasant work on the farm.

In the video of the army of Taiwan, both paratroopers, the Navy, and tank troops. The video begins with the fact that the father teaches his son to ride a bicycle, then he is shown to solemn music at the Air Force training ground, where he teaches recruits to conduct an air battle.

Full of humor and advertising of the Estonian army. In the video, bikers sitting at outdoor café tables witness how a jeep driver, parked, throws motorcycles on one side. Evil bikers decide to sort it out, however, when they see an army badge on a young man's jacket, they embarrassedly apologize.

Japanese marines are dancing smartly and merrily on the deck of a warship, but the video immediately demonstrates how they are ready to solve military tasks just as easily and naturally. For clarity, the Japanese oppose to their playful commercial the stern style of advertising of the American Navy.

The video advertising the army of Singapore, shows how a modern warship is transformed into a huge fighting robot. A monster jumping out of the water onto the jetty seems ready to withstand any threats.