"If we were allowed to kill with impunity ..." 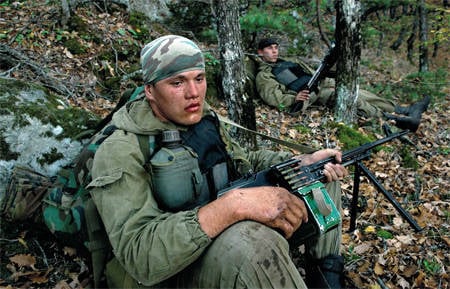 Interview with a contract soldier serving in Chechnya

Recently, President Medvedev spoke about the development of the Armed Forces of Russia. Noting the "high morale and combat proficiency" of the federal troops, he referred to the "social well-being" of servicemen, the provision of housing and decent pay.
These speeches are not new and have become familiar to Russian soldiers. They sound over the years. How does the situation change? Was it better for the military compared to Yeltsin's times? How high is their morale really? What are they thinking about?
To answer these questions, we interviewed a single contract soldier currently serving in the Chechen Republic. We publish it as it is, without even commenting on those moments with which we have disagreement. Let the readers make up the most objective portrait of the modern Russian soldier and the army in which he serves.

Corr .: In what kind of troops do you serve, your military rank, military specialty?

Corr .: What are the main tasks of your part?

S.N .: The main task of our unit is to cover the border in the event of an attack on the Russian Federation from Georgia. Secondary is the conduct of IRD1, protection of local events, support specials. forces during the CTO2, search caches and militants.

Corr .: How are special operations conducted?

S.N .: Operations always take place differently. Principle one, first the intelligence of the UGV finds the alleged location of the militants. Throws a group of FSB or MVD specialists there, destroys the gang. If they refuse to give up, our job is usually to block the alleged waste. So we don't do anything especially, others are storming them. If the gang is large or they have a good defense, artillery is used, aviation, then the place of shelling is cleared.

Corr .: Are federal forces attacked by militants as it was before?

S.N .: It happens. As a rule, these are attacks on convoys, individual vehicles, explosions on roads, shelling of checkpoints.

Corr .: How often does this happen?

S.N .: I don't know the statistics. In my memory, we were last attacked in August last year. To the column of the Internal Troops a month ago, this is in Chechnya. And in Dagestan, attacks take place every day.

S.N .: Three years, vacation once a year 30 days, service In accordance with the Charter of the Armed Forces of the Russian Federation, accommodation in a barracks, salary of 24-28 thousand, free treatment, the use of all rights of military personnel. This is so on paper.

Corr .: And how are things really?

S.N .: In fact, to take a vacation, you have to pay a bribe five thousand. Salary 21-24 thousand. Accommodation - when, how, when in the barracks, when in a tent, when in the open air. It depends on the task being performed. The food is such that the pigs will not eat. The shape is given five sizes more, and even then not all give what it should be. As a result, we buy from the local population. We buy medicines ourselves. If you are sick and you need to go to the hospital, you go at your own expense. The barracks are collapsed, every year they collect from us for repairs, as a result the money disappears somewhere, no repairs are done. Travel to the place of vacation is paid every other time. The Law "On Veterans" almost does not apply to us. Veterans' certificates can only be obtained for a bribe of 25 thousand. It is impossible to quit; you also need a bribe from 30 to 50 thousand. If you just go home, a criminal case will be opened. The charter is not respected, the commanders themselves violate the order. Sometimes we go to bed at one in the morning, and at six we get up. There are no days off, the working hours do not roll here, you are on duty around the clock, even when you sleep. There are no payments to compensate for service on holidays. In general, almost no clause of the contract is being honored.

Corr .: Do you agree that such a salary covers the risk of service in a hot spot?

Corr .: How does command relate to soldiers?

S.N .: In much the same way as the administration of the zone treats the convicts. For the command, a soldier is a slave who must do and be silent. There is a joke here. Our team is called the High Security Brigade.

Corr .: Examples of such an attitude can you give?

S.N .: Well, for example, the phrase of the commander to a sick soldier: "Only a coffin can exempt from service. Run into the ranks!"

One soldier on the mountain range training ground fell ill, the temperature was 41, he was forced to dig trenches.

The mother died for the soldier, he went directly to the unit commander, as the junior commanders sent to a known place. Bottom line: I learned a lot about myself and was sent to x ... As a result, the guy left part without permission.

The soldier wanted to quit, his father was ill. He went to the chief of staff. Early Headquarters knocked out his teeth.

Or another example. One guy died by mistake of doctors. They said that from drunkenness. Then another body was worn on the parade-ground, showing what the alcohol was driving to.

In general, I can give hundreds of examples.

Corr .: What is the attitude of ordinary soldiers to the command?

Corr .: Is there hazing in your part?

S.N .: There is no hazing as such. Only citizens from Dagestan usually do not work, forcing the weaker ones. But this is in the infantry or in separate units, we do not have this in the battalion due to the absence of Dagestanis.

Corr .: How does the reform of the army of the Russian Federation affect your unit?

S.N .: No changes have been observed yet. Only what has become more difficult with the supply of security. But on the other hand, it became more of the required allowance to reach us.

Corr .: And how are things going with military equipment and equipment?

S.N .: Recently, they began to give new equipment, but, as always, every other time. They do not provide equipment at all, only a battalion consisting of former Vostok militants. Weapon they changed the type to new and better, and the result was “as always”: 70 armed the AXU infantry with percent of the infantry, and then get the hell out of it when released. It would be better if they gave a slingshot, laughter. Intelligence machines caliber 7,62 changed to 5,45, also old. The most important thing is that PPE3 absolutely new brought, without OZK4 Russian soldiers can not fight. But Broniki for their money, the infantry buys. New helmets still gave 500 units to the brigade.

Corr .: Are Chechens religious? How do local people feel about Russian civilians and the military?

S.N .: Most are very religious. The military are treated like invaders, but at the same time they understand that without us they would starve. They don't like to work, most of them are engaged in trade. They sell, we buy. I don’t know how civilians are treated. I have not seen any civilians who have nothing to do with the military. Here nationalism flourishes, one in ten Chechens is not a nationalist.

Corr .: The media often talk about the restoration of the economy, infrastructure, construction in Chechnya. Is it so?

S.N .: Yes, they are doing it, but Moscow gives money for it. This is the merit of Kadyrov. He does not allow officials to steal. If you compare the roads in Chechnya and at my home, then this is the same as comparing Russia and Germany.

Corr .: Who do you think really belongs to power in Chechnya?

S.N .: Kadyrov and his gang, called the "A.Kh. Kadyrov Special Police Regiment". In fact, this is Kadyrov's personal guard and bodyguard.

Corr .: What is the overall situation in Chechnya, in your opinion?

S.N .: It is hard to say. On the one hand, the standard of living seems to be rising, on the other, there are no real jobs. Men go to work in Russia or become police officers. Women are engaged in trade. They have no freedom of speech. Serious opposition is out of the question. There is no freedom of choice. Here the laws of Russia are mixed with the laws of Sharia.

Corr .: How adequate are the actions of the federal forces in Chechnya? Is there any real interest in ending the conflict?

S.N .: To be honest, personally I have no interest. This means that I will lose my job. The Chechens are also not interested in this, they will lose their income. Only Ramzan is interested in this, he dreams of making Chechnya a resort. The command is also hardly interested: the cash flow will stop, from which everyone has his share. I mean the generals.

Corr .: Why do you value your work so much?

S.N .: Because when I return to Russia, no one there cares about me. Where he was, what he did - nobody cares about it. There is no job, it is impossible to get a normal education, there is no housing, what awaits me there? Social assistance 1600 rubles? To beat the thresholds of the authorities, proving something to someone useless? In our country, everything is through the backside. The state, sending a person to war, must be ready to accept him back. We are usually not hired for normal work, only the crime remains, and I don’t want to.


Corr .: Do you consider the war in which you participate, fair and why?

S.N .: The question is incorrectly posed. There is no war as such, a counter-terrorist operation is underway. Personally, I believe that fanatical bandits should be destroyed. In terms of justice, I think that there are no just wars at all, there are different sides to a war. Some are fighting for theirs, others for theirs. And at the moment, both we and the militants are fighting for money. They hide behind faith, we are patriotism.

Corr .: And what, in this case, are you thinking about the Great Patriotic War?

S.N .: It was a terrible, bloody massacre that brought much grief to the Soviet people. The Great Patriotic War was a just war. After all, it was not the USSR that attacked, but the USSR attacked.

Corr .: What do you think needs to be changed in Russia? Who should have power?

S.N .: I think we need to remove the monopolists. Invest the proceeds from the sale of resources in the country's economy, and not in the overseas accounts of businessmen. All exports must be owned by the government and not by private individuals. All production must belong to the country, not to private owners. You can keep small businessmen: bakers, stalls, restaurateurs - but increase the income tax for them. To exempt pensioners, the military, and the poor from paying taxes. Power should belong to the people, all officials should be elected by people, and not appointed by someone. And these officials must be accountable to the people.