August 11 2017
38
The Russian defense industry continues to implement new projects in the field of mine and torpedo weapons. Not so long ago, it became known that new results were obtained in this area: following the results of all the necessary tests for armament, a promising torpedo was adopted, known by the code “Case”. However, some of the facts mentioned in the latest reports on this subject may be cause for optimism.


The product "Case" is the newest of the well-known domestic developments in the field of torpedo weapons. According to the available data, the aim of this project was the further improvement of the existing torpedo of the UGST “Physicist”, which was put into service several years ago. In particular, in connection with this new project is also called “Physicist-2”. Work on the new project started in the recent past and eventually led to real results in the form of readiness for adoption.

In March of this year, RIA "News"With reference to unnamed sources in the military-industrial complex wrote about the current successes of the project" Case ". Then it was stated that by that time the new torpedo had time to test. In addition, some of the necessary checks have already been successfully completed. Also, an unnamed source revealed the future plans of the industry and the Ministry of Defense. So, in the foreseeable future, the torpedo "Physicist-2" / "Case" was planned to be adopted. The corresponding order was to appear in the 2018 year. 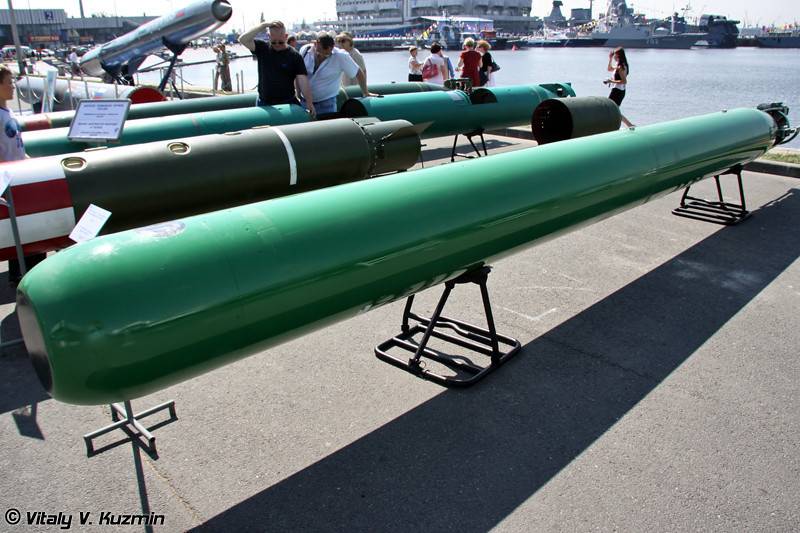 A few months later, on July 12, Izvestia published new reports on the progress of the promising project. From the published data it follows that to date, the industry has managed to complete all the required work. The designer of the torpedo armament of the Research Institute of Marine Heat Engineering, which was developing a new project, Alexander Grigoryev told Izvestia that the torpedo of the UGST “Fizik-2” had already been adopted by the naval fleet Of Russia. Also, the participant in the creation of the torpedo noted that in the future this product will have to replace all existing types of armaments equipped with electric power plants.

Recent reports of the adoption of a torpedo "Case" for use suggest that the tests were completed prematurely - a few months earlier than the indicated dates. As a result, not later than the middle of 2017, the product was put into service, although earlier these events were attributed to the next 2018. Thus, serial products can enter the naval arsenals with a certain advance of the existing graphs.

It is known that the new product "Case" is a modernized version of the older torpedo UGST "Physicist". Recall development work with the cipher "Physicist" started in the mid-eighties; its goal was to create a promising deep-water self-guided thermal torpedo. The head developer was the Scientific and Research Institute of Marine Thermal Engineering, which was to be supported by several other organizations. Experimental products of the UGST were put to the test in the mid-nineties, and at the beginning of the next decade the torpedo was put into service. During this period, the first public demonstration of the new weapons, the venue for which was the International Naval Salon in St. Petersburg.

A few years ago, the institute-developer began to create a modernized version of the existing “Physics”. The new torpedo on the basis of the existing has received the working designation "Physicist-2". In addition, the alternative name "Case" soon appeared. Currently, both designations are used in parallel and do not cause any confusion.

Until a certain time, detailed information about the torpedo "Physicist-2" / "Case" was absent. Only a few months ago some technical data was published. In addition, some publications in the press on the development of torpedo weapons, revealed certain details of the new project. For obvious reasons, the differences from the existing weapons of the base model, as well as the advantages gained in the framework of the new project, were most often mentioned. All the data published so far make it possible to draw up a rather detailed picture in which, however, some “white spots” still remain.

Like all modern domestic torpedoes, the UGST "Case" has a cylindrical body of high elongation with a hemispherical head fairing cut off and a conical tail section, which serves as the basis for the propulsion and steering system. The total length of the product, according to available data, 7,2 m, caliber - 533 mm. The mass of operational torpedoes - 2,2 t.

According to its layout, the torpedo probably repeats the design of the basic "Physics". Recall, the UGST of the first version had a head compartment with homing equipment, behind which the charging and reservoir compartments were sequentially located. The tail section was given for the installation of the engine and actuators of the control system. Apparently, in the new project, the similar architecture of the torpedo did not change and was not finalized.

According to published data, the "Case" is completed with an axial-piston internal combustion engine using single-component fuel. The type of engine and its main characteristics have not yet been announced. It is known that the base "Physicist" had an engine with a power of 350 kW (469 hp), which included a rotating combustion chamber. The fuel was supplied by a high-pressure pump. Tanks for transporting fuel were in the central part of the body. It was proposed to start the engine using the starting powder charge.

The engine shaft passes through the tail section of the hull and is output to the outside, where it is connected to the jet propulsion unit. The impeller of the latter is placed inside the annular channel, which improves performance, simultaneously reducing noise. Next to the annular channel of the water jet are the rudders. A curious feature of the projects of the FGI family of UGSTs is the use of controlled surfaces laid out after exiting the torpedo tube. For greater efficiency, the rudders have a box-like structure with a pair of large planes and a small bridge between them to be output to the stream. This design increases the efficiency of the rudders and to some extent simplifies management.

It is known that the product “Physicist-2” has means of homing, however the type of such a system has not been specified. In this case, there is some information about the control systems of the previous UGST torpedoes. According to the available data, within the framework of the ROC "Physicist", the enterprises of the domestic defense industry created at once two variants of active-passive homing systems, which have certain differences. Together with the homing can be used remote control from the corresponding remote submarine carrier. For the transmission of commands to onboard torpedo systems, a cable placed on two coils is used. One of them is equipped with 25 km of wire and is located inside the torpedo, and towed with 5 km of cable in the transport position is placed near the jet propulsion unit. The third coil can be mounted on board the carrier. With the help of cable and remote control, a torpedo can be displayed in a predetermined area of ​​the intended location of the target, after which search and targeting is assigned to automatic systems.

The homing system “Physics” has a flat nasal receiving-emitting antenna, which includes a large number of individual elements. A torpedo is able to find both the targets themselves and their wake. Automation detects surface ships at distances up to 1,2 km, submarines - up to 2,5 km. Wake track indication time - 350 s. Undermining the warhead is made using a proximity fuse. It works at distances up to several meters from the target.

Behind the head compartment in the case of the torpedo "Case" is a combat charging compartment. The torpedoes of the new family carry a similar charge in the form of an 300 kg explosive. The power of such a fighting compartment is sufficient to inflict the most serious damage to surface ships and enemy submarines. Probably, at the same time with combat torpedoes carrying a powerful explosive charge, products of a practical type can be produced. In this case, the charging compartment must be filled with ballast of the desired mass.

According to the national press, the torpedo UGST “Physicist-2” / “Case” can reach speeds up to 50 nodes (more than 90 km / h) and move at depths up to 400 m. The firing range is up to 50 km. In various publications, it has been repeatedly noted that a promising product exceeds the existing domestic and foreign torpedoes in range. This feature of a new weapon significantly increases the likelihood of successful timely destruction of a target with minimal risks for its carrier.

According to previously published data, the new torpedo "Case" is primarily intended for the armament of modern nuclear submarines of the latest projects. Thus, the multipurpose nuclear submarines of the 885 "Ash" project and strategic cruisers of the 955 "Borey" project can become the first carriers of these weapons. It is possible that in the future such torpedoes will be included in the ammunition of other domestic submarines built on older projects.

Production "Cases" should be deployed at the plant "Dagdizel" in Kaspiysk. According to reports, this company is currently producing products of the UGST "Physic", and in the near future will master the mass assembly of its upgraded version. According to some reports, the launch of mass production of torpedoes "Physicist-2" will lead to a halt in the release of products of the base model. Apparently, such a replacement will not lead to difficulties of a technological or operational nature, but at the same time it will allow a certain extent to increase the potential of submarine forces.

The development of a new version of the self-guided thermal torpedo to replace existing products "Physic" started just a few years ago. To date, torpedo builders managed to complete the design and carry out the necessary tests. According to reports this spring, the checks were successful and allowed to make optimistic estimates. At the same time, however, anonymous sources of domestic media called quite modest plans: a new torpedo was supposed to come into service only next year.

Just a few months after that, one of the authors of the new project said that the torpedo “Physicist-2” had already been adopted by the Russian Navy. Whether mass production has begun has not yet been clarified. Other aspects of the new project are also not disclosed. At the same time, there were reports that the new torpedo will replace the base model's products in production.

The development of domestic mine-torpedo weapons continues and gives definite results. In just a few years, an updated and improved version of the existing FGM “Physicist” product was created, featuring a number of advantages. This torpedo was commissioned not so long ago, and in the near future it will have to go into the arsenals of the Navy and get into ammunition of the newest nuclear submarines.

We are in Yandex Zen
Perspective torpedo "Case" passes state tests
Man-controlled torpedoes SLC Maiale (Italy)
38 comments
Information
Dear reader, to leave comments on the publication, you must to register.