"I see you, and you do not have me!" Strobe domes on tanks

August 15 2017
38
The development of such a promising means of warfare as a tank, set before its designers many different tasks, which had to be solved in a hurry, literally on the go, and solved effectively, because the lives of people depended on their qualitative solution. 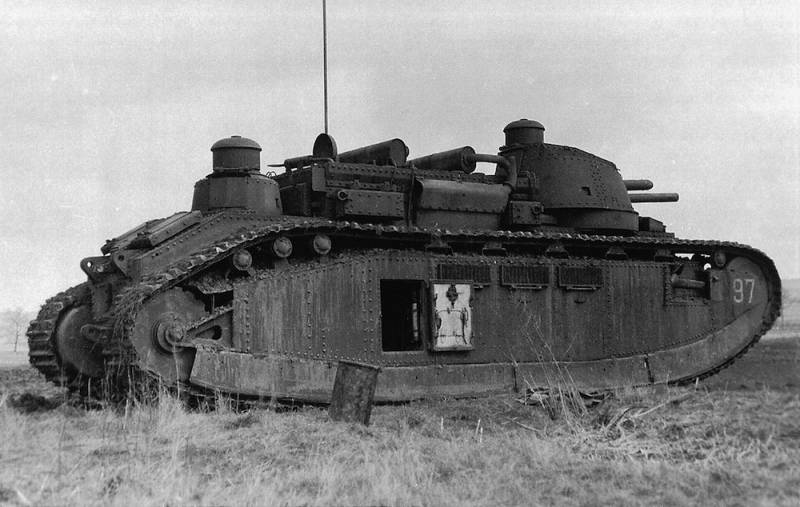 The French tank FCM 2C hit people of that time with one of its appearance: two turrets, a long-barreled 75-mm cannon, four machine guns, a 13 man crew. There are two stroboscopes: on the front tower and on the back, for the machine gunner.

For example, a full car reservation. It was necessary, understandable, but how to survey the surrounding area? After all, no one needs a blind armored wagon! Make "viewing windows"? But bullets and splinters would freely fly into them! So that should be thought over and this question, which became for tanks World War I is very important.

The decision to execute was simple and cheap. These were narrow "slots" (slots) in armor, the probability of a direct bullet hit in which was extremely small. Also tested and periscopes already used at this time in the infantry. But it turned out that the field of view through the periscope is rather limited. The gaps are better, although not only could bullets fly through them, but poisonous gases and flammable liquids could also get into the tank. It was also impossible to make inspection slits completely narrow (smaller than the diameter of the bullet). In this case, you would have to bring your eyes close to them, which would also be unsafe.

Soon, however, it turned out that the gaps, first of all, give a limited view and the tank commander does not see the whole surrounding area. And secondly, the bullets, splitting about the armor next to the viewing slits, scattered splashes of molten lead in all directions. Moreover, even the smallest such “drop” deduces the tank driver! Ideally, a device was required that would allow the tank commander to have an overview of all 360 degrees and not be exposed to the danger of bullets and shell fragments. At first they tried to solve this problem by installing “commander's turrets” on the tanks - quadrangular logging with four observation slots. After looking in turn at each, the commander remembered the “picture” of the surrounding area and could react to a change in the situation. But ... something he could not notice, and he could not, sitting in his "booth", continuously spin like a top!

And a very elegant solution was found and first used in France on the FCM tank (Société des Forges et Chantiers de la Méditerranée) immediately after the First World War. It was based on the ... stroboscopic effect. Moreover, this effect itself was used in the Victorian era in the entertainment setting Zeotrope, which used a slit cylinder with a series of images on the inside of the cylinder. When the cylinder rotates, the images merge into one moving image, and it seems that the gaps between frames disappear. This is caused by the phenomenon of persistence of vision - since the human eye sees the world "at speed" 0,1 seconds. That is, our brain at a higher rate of breaks simply does not see. Nor do we see frame breaks on the film, although they are there, of course. 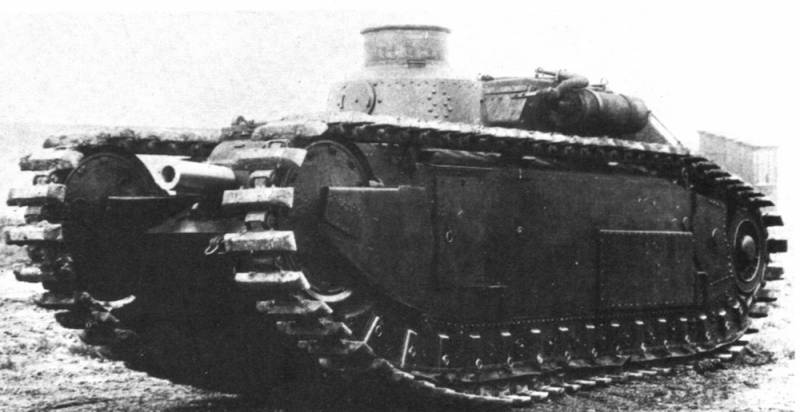 Tanks from other countries were not equipped with such impressive innovations. The British thought that in the coming 10-20 there would be no war in Europe for years, so what's the point of hurrying them? The Germans had no time for tanks, in Russia and the tank “Fighter for Freedom comrade. Lenin ”was a marvel and it would have never occurred to anyone to improve him in such an expensive way in those years, and in the USA the tanks generally had a rather strange attitude after the war, moreover, the British shared the opinion there. And only the French went to all these innovations, because they had a solid foundation for the future and did not want to just give it up. As a result, strobe lights appeared on the heavy FCM 2C, but the impressive FT-17 / 18 light park never received them. 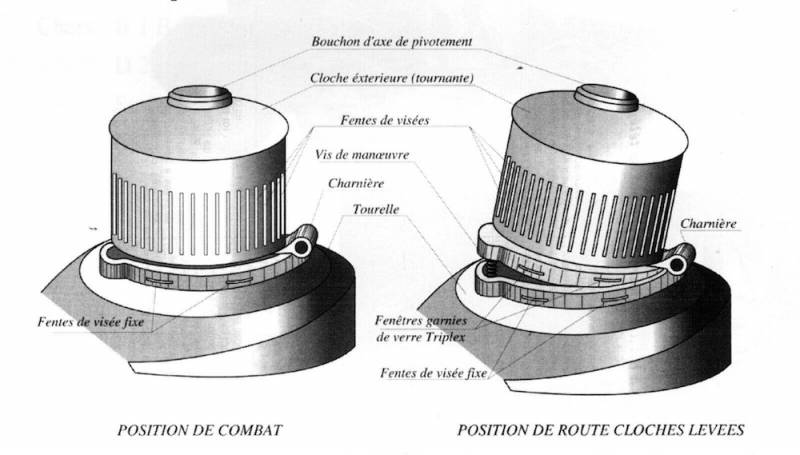 The device is a French strobe.

The device of the strobes installed on FCM 1A and Char de Batayle prototypes is unknown, but it is known how they were arranged on the FCM 2C tank. The domes on FCM 2C consisted of two cylinders inserted one into the other, an internal frame with seven triplex glass blocks, and an electric motor for rotating the external body of the dome. This outer cylinder was made of chromium-nickel steel 30 mm thick. That is, it was essentially a first-class armor! Slots for the stroboscopic effect were 2 mm wide, wedge-shaped, that is wider on the outside than on the inside. It is clear that no bullet standard caliber 7,5-mm could not penetrate into the hole, even with a direct hit in it. The slots were located in 9 groups of 5 slots in each, and the intervals between them were approximately 20% less than the intervals between the groups. The outer shell of the dome rotated at a speed of about 250-300 rpm, which gave quite a satisfactory stroboscopic effect. The inner and outer shells visually seemed to dissolve, and the tank commander's head turned out to be ... "in an open field," so that he could freely observe all the space around him in any direction! The entire dome leaned back, which was done to allow direct observation outside combat conditions. In the base ring of the stroboscopic dome there were additional viewing holes, fitted with glass blocks. It was claimed that the French stroboscopic domes were resistant to bullet hit and gave the tank commander an overview of 360 °, although the brightness of the view was somewhat reduced. 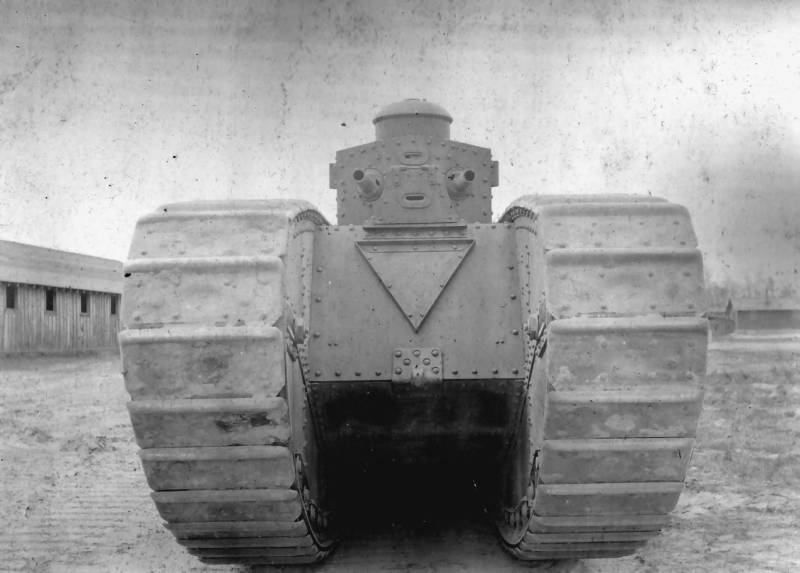 American tank Mk VIII with a strobe on the commander's cabin.

Although the Americans essentially froze their tank program and did not release new cars, in the period from 1920 to 1925, the US Army Combat Division conducted numerous experiments with stroboscopic domes mounted on tanks. The American stroboscopic dome had only one slit cylinder, and not two, like the French. It was argued that the dome was very vulnerable to 0.30 caliber rifle bullets. The project was closed in 1926 with the conclusion that conventional periscopes are superior to the stroboscopic dome. To test the dome was prepared heavy tank Mark VIII, in which it was installed on the command post. Other examples are unknown and, by the way, quite surprising that Americans limited themselves to such a simple strobe design and did not even try to increase the thickness of the cylinder armor. Well, would make it 20 mm thick. In any case, such armor at that time was rifle bullets too tough! 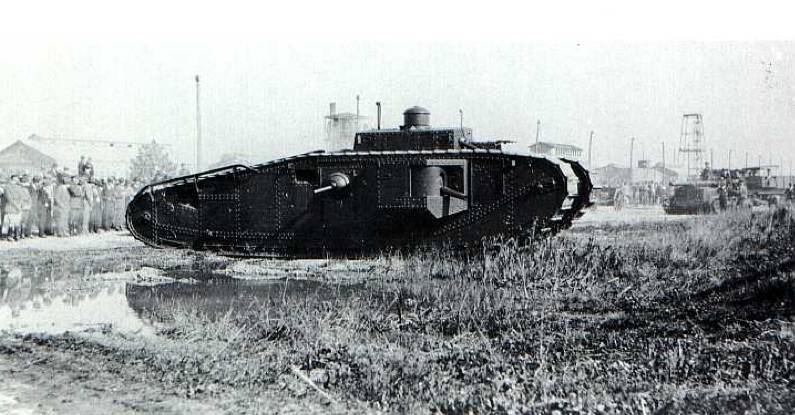 The same tank, side view.

The last time the strobe came into view was the German tank designer Edward Grote, who was invited by the Soviet government to head the design bureau to develop new advanced tanks for the Red Army at the end of the 1920s. The medium tank, created by a team of engineers under his leadership, was something of a “show of force” object and the most advanced tank technology at that time. So is it any wonder that the Grote put on it a stroboscopic dome. It was assumed that the tank will have two towers, one above the other with independent rotation.

Tank Grote: all in guns and machine guns and a stroboscope on the upper turret.

And at the very top and a strobe was installed for the commander. “I am sitting high, looking far!” - this is what could be said about such an arrangement, which in this case and for a given tank would be completely justified. In 1931, only one prototype of the T-22 tank was released, since the Soviet authorities believed that this tank would be too expensive and difficult to manufacture with the limited capabilities of Russian factories. No information was found on the characteristics of its stroboscopic dome. Well, more strobe lights on the tanks have not been used. That is, they were used on the French FCM 2C, who ingloriously died under the bombs of the German dive bombers at the very beginning of the war during their transportation by rail!