News of the project "Birdies"

August 8 2017
37
The development of promising weapons and equipment for the Russian airborne troops is continuing. To date, several new models of various applications have been adopted, and in the foreseeable future, arsenals and equipment will be replenished with new domestic developments. According to recent reports, at the end of the current decade, the newest Pitselov anti-aircraft missile system, designed specifically for the Airborne Forces, will have to appear.


A few days ago there were new reports on the development of such an anti-aircraft system. 2 August, on the professional holiday of the landing, the TASS news agency published some information received from an unnamed source in the military-industrial complex. The source revealed the existing plans, called some features of the promising air defense system, and in addition, announced the approximate dates for the emergence of a new development. At the same time, he did not disclose the main technical characteristics of the combat vehicle and its weapons. In combination with the already known information, new information allows to update the existing picture in a noticeable way.

The source of the TASS news agency said that at the present time the project with the code "Birdies" is at the stage of development work. This phase of the program should be completed by the end of 2019. Already in the 2020 year, it is expected to put the new air defense system on the armament of the airborne troops and establish its mass production. The required number of similar combat vehicles and other similar plans directly connected with the re-equipment of the units remain unknown. 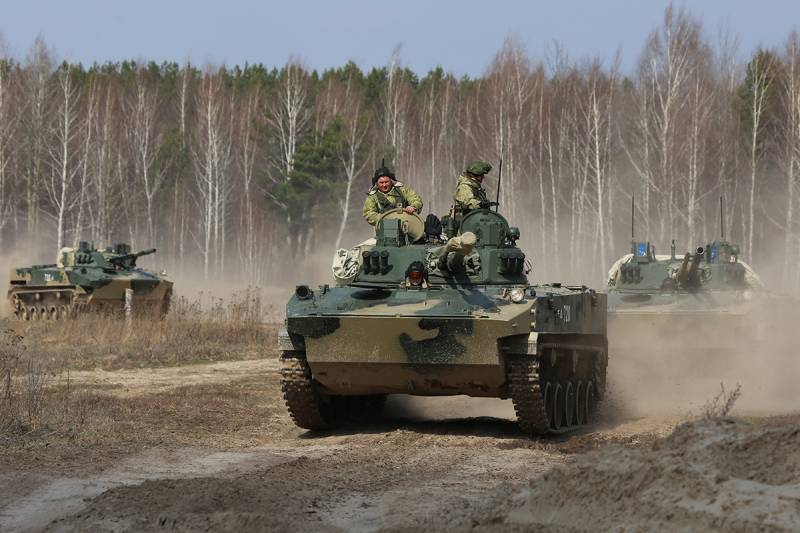 According to the source, the new “Ptitselov” complex will be airborne and airborne, for which it is planned to be built on the basis of the landing gear of the BMD-4M airborne combat vehicle. The combat module of the complex will carry only missile weapons, allowing you to attack air targets at short distances. At the same time, in terms of its combat capabilities, a promising air defense missile system will be twice as large as the systems already in service.

It should be noted that information from an unnamed source in the defense industry in the most serious way changes the already established picture based on previous the news about the "Birdman" project. The development of a new air defense system specifically for the Airborne Forces became known a few years ago, and over the past time, some information about this system has become public knowledge. Apparently, over the past time, the designers of military equipment and the customer managed to significantly revise their plans, as well as change the appearance of the desired anti-aircraft system.

Recall that the first reports on the development of a promising airborne anti-aircraft complex suitable for use in the Airborne Forces appeared in the middle of 2013. It was reported that such a project involved Tula Instrument Design Bureau. At that time, the anti-aircraft complex for the landing force was planned to be built on the basis of the existing Pantsyrya-C1 rocket-cannon. It was assumed that such a machine, having the required mobility, on the battlefield could replace the existing Strela-10 air defense system and portable systems of the Igla family.

At the beginning of May 2016, the name "Birdies" appeared for the first time in media reports. According to the press, obtained from unnamed sources in the defense industry, in the foreseeable future it was planned to create a promising short-range air defense system based on the BMD-4M tracked chassis for arming the airborne forces. There was a high priority of the project, directly related to the features of the fleet of airborne vehicles: this branch of service still operates the systems created about 40 years ago, and therefore, despite the repair and modernization of existing equipment, it needs new anti-aircraft complexes, including special features and special features.

Shortly after the first reports of the ROC "Birdies" information about the possible appearance of a promising complex appeared. With reference to an unnamed source in the Ministry of Defense, the TASS publication wrote that defense industry specialists and the customer were considering the possibility of using various combat modules, including existing models. Thus, the short-range "Birdies" air defense system could get a combat module from the Strela-10 or Pine serial system.

At the end of May last year, the national press clarified the current state of affairs in the project. An unnamed source in the headquarters of the airborne troops told reporters about the start of work on the creation of the "Bird-catcher." At the same time, however, at that time works were at the stage of technical design. Experimental design work had not yet begun. Despite this, the source revealed some details of future rearmament. According to the plans of that time, the “Birdies” air defense missile system was supposed to come into service with anti-aircraft regiments of the Airborne Forces formed a few years ago and replace the material part of the old types they had.

At the end of July last year, the first official statements appeared concerning the further fate of the new anti-aircraft systems. Deputy Commander of the Airborne Forces, Lieutenant-General Andrei Holzakov, revealed the existing plans for the promising techniques such as the Typhoon and the Birdies. According to the general, according to the plan, the new armored personnel carrier and the air defense system will have to appear in the troops already in 2017. However, the deputy commander did not rule out the possibility of revising such plans.

Over the next year, new information on the progress of the “Fowler” project received from officials or unnamed sources has not been received. Only a few days ago, at the very beginning of August, some curious details were published. It should be noted that the recent reports to a certain extent complement the already known data, and in some moments contradict them. All this suggests that over the past year, the project "Fowler" has undergone significant changes, apparently aimed at improving the characteristics and obtaining new combat capabilities.

According to available data, the promising airborne warning system "Birdies", intended for airborne troops, will have the greatest possible unification with the existing serial equipment. First of all, it will be expressed in the use of the tracked chassis of the newest BMD-4M airborne assault vehicle. At the present time, such machines have been adopted and put into series. The use of the existing chassis will, to a certain extent, simplify the operation of the new technology, and will also allow the anti-aircraft complex to be transported by existing military transport aircraft and, if necessary, parachute it.

For obvious reasons, the volume and methods of processing the base chassis are still unknown, and in this context one can only make various predictions. Most likely, in the development of the “Bird-catcher”, the BMD-4М chassis will lose only the tower and the corresponding equipment of the combat compartment, while the hull, powerplant, chassis, etc. will remain the same. As a result, the anti-aircraft machine will retain anti-bullet reservation and a relatively powerful propulsion unit, providing it with high mobility on land and on water.

Requirements in terms of air transportability and the possibility of landing from military transport aircraft make it possible to present approximate dimensions and combat mass of a promising vehicle. Obviously, according to these parameters, the new "Birdies" should not seriously differ from the serial BMD-4M.

In the past few years, the possibility of building the Ptitselov using existing combat modules has been mentioned. The first “candidate” for the role of the source of the required components was the Pantsir-С1 rocket-gun. Later, the possibility of using units and units of the Strela-10 and Pine air defense missile systems was mentioned.

According to the latest reports published at the beginning of this month, the “Birdies” complex will carry only rocket weapons. Thus, direct borrowing of the combat module of the “Pantsir-С1” type without any modifications is excluded. In addition, a TASS source said that in terms of the range and height of target destruction, a promising anti-aircraft complex would be twice as good as the serial systems in service with the Airborne Forces. Such a statement makes it possible to approximately determine the main combat characteristics of the air defense missile system, as well as imagine which of the existing missiles can be used to obtain such capabilities.

Currently, the Strela-10 self-propelled vehicles of several modifications are the most powerful and effective air defense system in the fleet of airborne vehicles. The missiles of these complexes, including the latest models, are capable of hitting targets at ranges up to 5 km and altitudes up to 3,5 km. Thus, from recent news it follows that the airborne "Birdies" can shoot at a distance of 10 km and altitude of 7 km. Combat capabilities of the complex will grow accordingly.

A few years ago, when the first information appeared on the development of a promising anti-aircraft missile (or missile-gun) complex for the airborne troops, the deadlines for completing the design and deployment of mass production were not specified. The first reports on this subject indicated only an indefinite foreseeable future. Only in the summer of last year, the Airborne Troops Command for the first time indicated the exact date. According to the statements of the deputy commander, the first samples of the “Ptitselov” were to be sent to the troops as early as 2017. However, recent reports speak directly about changes in existing plans and a noticeable postponement. So, the stage of development work is now expected to be completed only at the end of 2019.

It can be assumed that during one of the first stages the project encountered some difficulties, the result of which was the complication and delays in the work. In addition, we cannot exclude another scenario, in which at a certain stage the requirements for the project were seriously reworked, with corresponding consequences for the work schedule. Anyway, now there is every reason to believe that the plans announced last year have not been implemented, and, as a result, the deadlines for completing the main work on the topic “Birdies” have shifted noticeably.

What will be the consequences of changing the schedule of work - one can only guess. However, such news may be an occasion for optimistic forecasts. The postponement of key events at a later date allows us to assume a noticeable revision of an existing project, implying the most serious increase in performance and expansion of capabilities. As a result, the armed forces can get a more advanced anti-aircraft system, even a few years later than previously announced terms.

The main result of the successful completion of the Poultry project, planned for the end of the current decade, will be the re-equipment of the air defense units of the Russian Airborne Forces. At the same time, the project will have another interesting feature. The result of ongoing work will be the appearance of the world's first anti-aircraft missile system, immediately developed for the transport and parachute landing of a military transport aviation. Existing systems for this purpose can be transported by air and land in the required manner, but specialized equipment that initially has such capabilities is not yet available.

According to current plans, by the end of this decade, the anti-aircraft gunners of the airborne troops will have to use complexes of existing models. With 2020, the deliveries of new equipment of similar purpose, characterized by higher performance and greater flexibility of use, will have to start. The emergence of such air defense missile systems will lead to a natural increase in the combat potential of the airborne forces and will allow them to more effectively accomplish the combat missions of one kind or another.