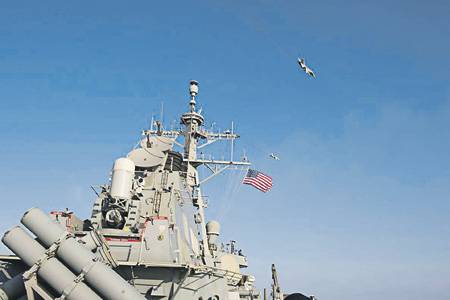 Russian aviation Khibiny’s electronic countermeasures complex (EEC) became known even to housewives after the incident with the Donald Cook, an American destroyer that entered the Black Sea. Let us briefly recall the essence of the matter.


15 April 2014, one of the Internet sites in the section "Conjectures" published an article "Khibiny" against "Aegis" or What did the Pentagon so much scare? ". The author spoke about the overflight of the Su-24, which has the Khibiny complex, the US warship Donald Cook, which was located in the Black Sea. The work of the equipment on board the destroyer was completely suppressed by the Khibiny complex, which disarmed the ship.

The article was later removed from the site as incorrect. The Russian military nonetheless acknowledged: the overflight was, our plane did not commit any hostile actions, the Khibiny complex was not installed on the Su-24 aircraft. The latter is a controversial issue. At least because the model of the Su-24M with a container of electronic countermeasure equipment KS-418 was exhibited at one of the MAKS air show.

PENTAGON IS AUTHORIZED TO APPLY

The reality of the incident was indirectly confirmed by the official representative of the Pentagon, calling the actions of the Su-24 pilot provocative. According to him, the Russian aircraft, apparently, did not have military weapons on its board, but 12 once passed near the US Navy ship. Actually, there is nothing strange that far from being a new front bomber without weapons passed several times near the newest US-armed destroyer armed to the teeth. Such overflights of ships were before practically at each meeting of probable opponents. 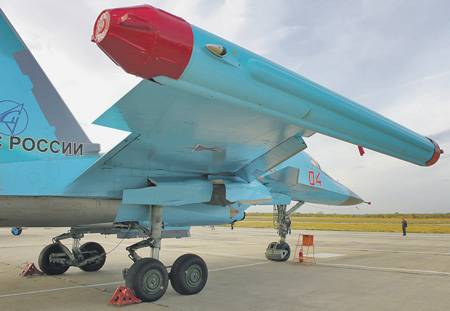 After the incident, as reported by the media, 27 man of the crew of "Donald Cook" wrote a letter of resignation. The Pentagon’s statement, by the way, claimed that the actions of the Russian Su-24 demoralized the crew of the ship. According to many military experts, the reason is in the use of the Khibiny complex by our bomber. And the American crew has demoralized its own powerlessness. According to experts, the destroyer from a distance spotted the Su-24 approach, brought the weapon into a state of readiness for use. And suddenly all his screens went out - so suddenly the screen of a mobile phone goes out. The Aegis system did not work. The screens came to life when the "drying" went to the Russian coast.

Skeptics claim that the Su-24 could not immobilize the destroyer due to lack of interference power, which happened - the result of work from the shore of another complex - “Krasuha-4”. But one way or another, the sediment remained. The reason, apparently, is that both the Russian military and the creators of Khibiny were modestly afraid of “international scandal”.

And one more conclusion from what happened: a non-lethal weapon, such as the Khibiny complex, or, alternatively, a smart weapon, in its effectiveness can be compared with a weapon of destruction.

As the developers of the complex say, it is intended for radio direction finding of the probing signal of the irradiation source with subsequent substitution of the signal parameters. That is, after receiving radiation from an airplane radar or enemy air defense system, this signal is distorted beyond recognition with the help of special equipment. As a result, the opponent who received him remains at a loss: what to do with “this”? As a result, the aircraft carrier KREP will be seen with great delay, if at all seen, as it will be disguised against the background of false targets. The enemy will face great difficulties in determining the distance to the target, its speed and angular position.

The complex provides individual protection of aircraft against rocket attacks of enemy fighters and ground-based air defense systems, creating a protective electronic field around the aircraft, as a result of the radar and guided missiles lose their target. Our planes become invisible to the enemy. The technology for realizing this is that, upon receiving an analog microwave signal from a target, the EW complex converts it to digital form, processes it, “endows” with interfering modulation, again converts it to analog form, and emits in the direction of the target - the enemy’s weapon is “blinded”.

The Khibiny complex is equipped with front-flight aviation aircraft. In terms of the composition of equipment and apparatus, the problems to be solved and the effectiveness of its use, it surpasses almost all EW tools that are in service with many foreign countries.

And now a little stories. The work on creating the prototype of the Khibiny KREP began at the Kaluga Radio Engineering Research Institute (KNIRTI is a member of the KRET. - “NVO”) at the end of the 80s. The first samples of "Khibiny" were not suitable for installation on an aircraft in terms of weight and dimensions, but KNIRTI established close cooperation with the Sukhoi Design Bureau, as a result the problem was solved. In 1990, the first sample of the Khibiny passed acceptance tests, but the collapse of the USSR, the reduction in funding for military developments slowed down the course of development work.

The first flight of the aircraft with the Khibiny electronic countermeasures complex was made only in January of the 1995 year.

In addition to a complex of electronic countermeasures for individual protection, an incremental additional Khibin composition was created in suspension containers for group protection of aircraft. Currently, KNIRTI has mastered the mass production of these protection means and delivers them to the Russian Defense Ministry.

Concern Radioelectronic Technologies (KRET) officially stated that Russian VKS aircraft are massively equipped with the latest Khibiny complexes: individual and group protection equipment is installed on the Su-34, the Khibiny-M complex is installed on the latest Su-35 and Su-27СМ3 . In this version, Russia offers for export the most advanced EW facilities, “run-in” in combat conditions in Syria.

The presentation of the Khibiny-M aviation protection complex, prepared by the Radio Electronic Technologies concern to MAKS-2017, mentions the purpose of the equipment: providing individual protection for Su-35 and Su-27СМ3 aircraft against attacks by interceptor missile systems and air defense systems. Types of suppressed objects: airborne radar F-14, F-22, F-35, Rafale, Patriot, TLVS, SAMP, AMRAAM guided missiles. The likelihood of a breakdown of an attack is estimated to be at least 0,9.

The most favorable situation for the group is in the market for aviation systems and EW facilities. This is due to the growing demand for these funds in the world. The conditions are dictated by the expected growth in the supply of Russian aircraft, as well as the increase in the share of aircraft supplied with EW equipment for individual and group protection. In addition, it is expected that foreign states will purchase EW funds when modernizing their own fleet of Russian-made aircraft and helicopters.