25 2017 June
63
The United States, a country with a large army and the largest military budget in the world, is closely following the growing military might of its geopolitical rivals, Russia and China. American journalists from Popular Mechanics decided to find out which military-technical innovations are being introduced or will be being introduced by the US armed forces in order to remain "at the level".


Today, American military experts are quite worried about the prospects for arming the Russian tank new generation T-14 Armata. In particular, an analyst at Stratfor private intelligence corporation, Sim Tak, is inclined to consider Russian development “the most deadly tank in the world.” Bearing in mind the hypothetical prospect of a collision with the latest armored vehicles from Russia or China, the Americans decided to strengthen the infantry firepower. What will be done for this?

The Carl Gustaf is a lightweight, shot-free, rifled barrel grenade launcher developed in Sweden in the 1948 year. Weapon infantry, which appeared immediately after World War II, turned out to be such a successful design that, having undergone a number of significant modifications, successfully survived to our days and is in service with many countries. In the M3 version (1991 of the year), Carl Gustaf already had a lightweight fiberglass body, in which a barrel was mounted in the form of a thin-walled insert (liner). All this has reduced the weight of the Swedish grenade launcher to 10 kg. Such a well-worn weapon with a good nomenclature of powerful enough ammunition was acquired by the American army, but so far it has been used exclusively by special operations in hot spots such as Iraq and Afghanistan. 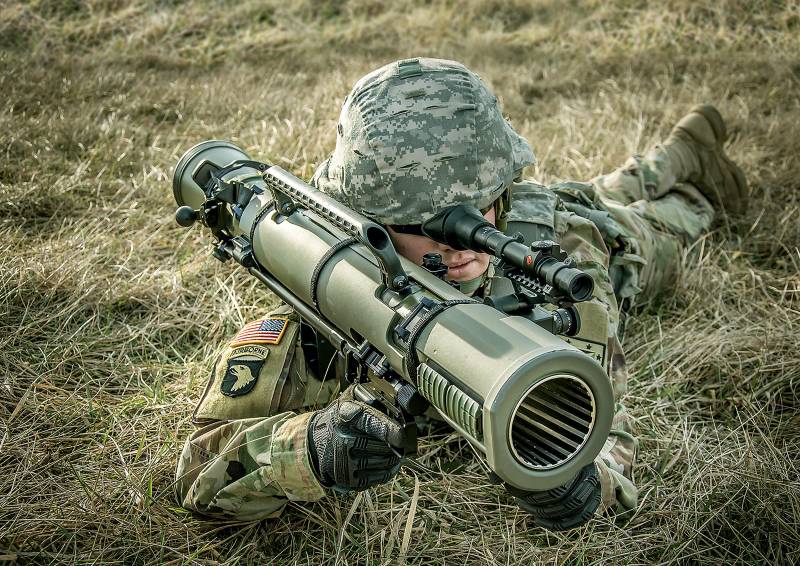 Created on the basis of the anti-tank rifle of the Second World War, the Carl Gustaf hand-held grenade launcher has become the latest weapon of the American special forces, and now it will increase the firepower of the infantry.

Since the spring of 2017, "Carl Gustav" will reinforce the usual infantry units. They will be armed with a modified by the manufacturer - concern SAAB - modification M3E1. In addition to the standard optical sight with 3-fold increase, the model can be equipped with an "intelligent" aiming system that can work with "smart" ammunition. The latter include grenades that explode only after they pierce the wall, and destroy the enemy personnel who have taken refuge behind it. With the help of M3E1, it is claimed that you can not only hit the shelter, but also turn a small structure into a brick, as well as attack armored vehicles.

If you move from earth to sky, then priority is given to unmanned innovations. Until now, all the shock "drones" of the type, for example, the MQ-1 Predator are unmanned aircraft. This creates known limitations for their use - the aircraft needs a runway, and not a small one, if we are talking about heavy vehicles carrying weapons. Last year, concern Northrop Grumman announced its draft UAV shock, created according to the tailsitter scheme, or "sitting on the tail." The car was named Tern, and its first prototype will rise into the air already in 2018 year. On the ground or on the deck, the Tern will be in an upright position (taking up relatively little space) and in the same position will take off with the help of a twin propeller, a helicopter. Rising to a height, the unit will fall on the wing and go on a mission in an aircraft version. In this case, the drone will carry on itself all the same reconnaissance or strike weapons, which is now used with the "Predatory" and "Reapers". Thus, Tern can be based in areas with difficult terrain and in the absence of the runway, as well as on the deck of any ship with a helipad, which will automatically turn this ship into an aircraft carrier. By the way, the idea of ​​a hybrid aircraft, "sitting on the tail," is not new. Something similar, only in the manned version, they tried to create in America in the 1950, but it didn’t go further than the prototypes. 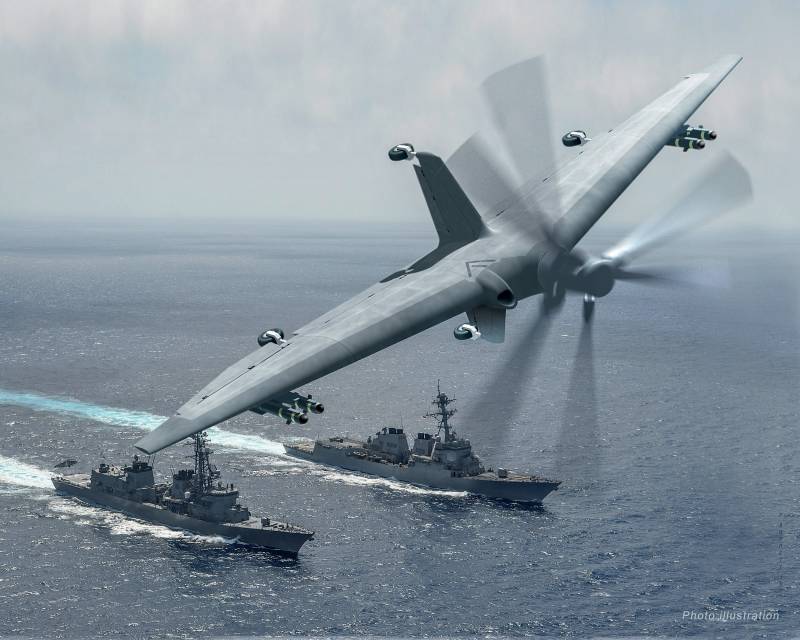 The performance characteristics of the Tern drone are not announced, but it is assumed that he will be able to fly at a distance of about 1600 km. It will give an American the fleet Long arms for aviation supporting operations at sea and on land.

The Tern UAV development program is conducted in collaboration with the Defense Research Agency DARPA and the United States Naval Research Authority. DARPA also oversees the Squad X program, in which combat is designed by a small infantry unit, supported by flying and ground drones and other combat gadgets. It is assumed that the US military will equip small drones that can automatically determine the location of the weapon and personnel of the enemy, and in the future to strike at the detected targets without the participation of the operator. 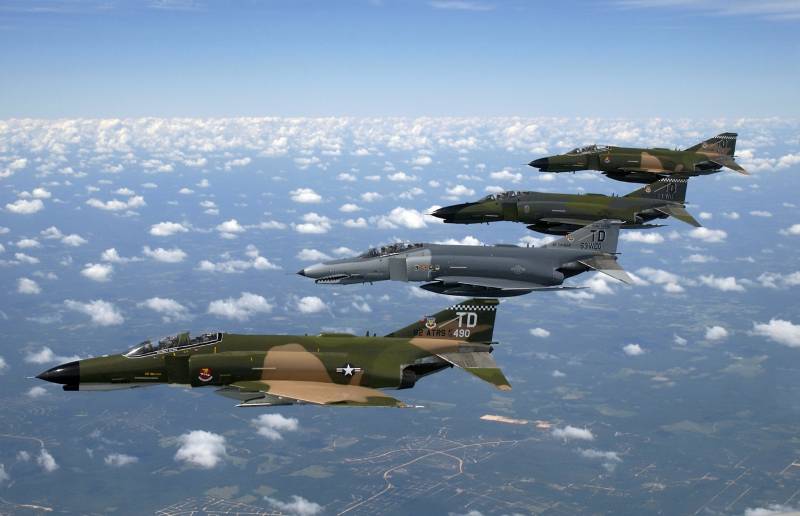 And finally, another extravagant idea, which has been discussed conceptually for a long time. As is known, in the United States, decommissioned combat aircraft are not disposed of, but preserved, which suggests the possibility of bringing them to a state of airworthiness. Now the US Air Force is considering the prospect of turning some of the "retired" F-16 into unmanned aircraft. A flock of veterans will be escorted by an X-Numx generation F-5 fighter and controlled from the latter. The re-drafting program is called Loyal Wingman (“true slave”), and the first results should appear around the year of 35. Thus, the expensive F-2022 fighter will receive additional protection and will become not a separate combat unit, but the “brain” of the whole strike group.

Above the sky - only space, but there, perhaps, the world will not always remain. And although the current international treaties prohibit the deployment of strike weapons in orbit, everyone suspects each other of the intention to place them there once. Space Surveillance Telescope (SST) is one of the most powerful and sophisticated ground-based instruments for astronomical observations (in the collection of its discoveries 3600 asteroids, 4 comets and 69 near-Earth objects - and this is only five years). However, the telescope belongs to the army, and by decision of the military it will be transferred from the state of New Mexico to the station of naval communications in Western Australia. From now on, its main task will be tracking factors (foreign spacecraft, space debris, etc.) that may pose a threat to the US military satellites. Science is science, and time is alarming. 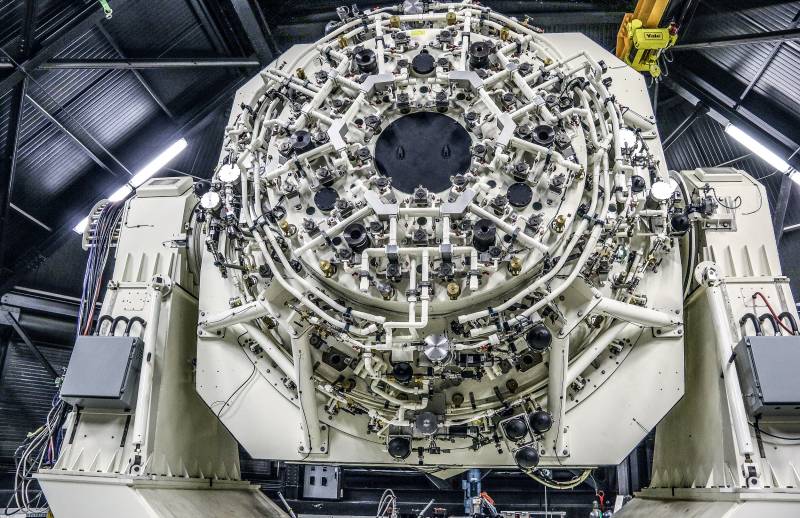 In today's high-tech war, satellites play such a large role that they have to take special care of their safety. This task mobilized one of the most powerful telescopes on Earth.