Perspective radar "Podlet-M-TM" was tested and ready for duty

22 2017 June
12
The development of new radio-electronic means for air defense does not stop. A few days ago it became known about the recent completion of state tests of the Podlet-M-TM radar station. In the foreseeable future, this system will go into service and will strengthen the grouping of the detection of aerospace forces. The result will be an increase in the potential of the domestic air defense and missile defense.


The press service of Tyazhmash enterprise (Syzran) informed about the completion of the state tests of the prototype of the new 12 radar system in June. The plant took an active part in the development of a promising sample of equipment, and also built a prototype intended for testing. For active participation in the project, the plant "Tyazhmash" was highly appreciated by the customer. It was also noted that the cooperation of defense enterprises will continue and will contribute to further strengthening the country's defense.

According to official reports, the Tyazhmash plant was brought to work on the Podlet-M-TM project at the initiative of the Moscow All-Russian Radio Engineering Research Institute (VNIIRT), which acted as the customer for the construction of experimental machines. The Institute for many decades engaged in the creation of radio engineering complexes for various purposes. One of his latest developments was the Podlet-M-TM complex, the creation of which as a subcontractor involved the Syzran plant. 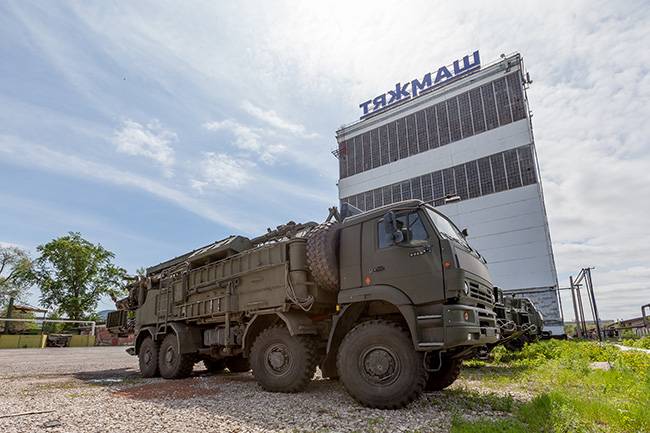 The main task of the company "Tyazhmash" was to assist in the design and subsequent construction of the first prototype of a promising radar, designated KHNUMXВ. It is noted that the development and construction of the prototype took the minimum time - just one year. To solve such problems, the enterprises participating in the project had to attract the most qualified personnel to work. After completing the assembly, the K1B product was sent for testing. It should be noted that the state tests of the first prototype of the Podlet-M-TM type were completed in spring. The act was signed on May 1.

According to the press service of Tyazhmash, at present, the unique complex is preparing to take up combat duty. As part of a division of the aerospace forces, he will have to supplement the existing equipment and increase the capacity of the armed forces in terms of detecting air targets.

Developing organizations note that the new complex “Podlet-M-TM” has a number of important advantages that enhance its tactical, technical and operational characteristics. Due to the use of a serial automobile chassis, high mobility is achieved, the complex assembly is distinguished by a relatively small mass. The on-board equipment provides high positioning accuracy on all landscapes and different terrain reliefs, and the used mechanical devices ensure the prompt transfer of the antenna post to the working position.

Unfortunately, to date, the main part of information about the project “Podlet-M-TM” has not been announced. The defense enterprises that participated in its development revealed some very general data, but did not specify the main characteristics. Nevertheless, a photograph was published of one of the radar prototype machines, designated K1B. In addition, the new station is another representative of the whole family, and information about its predecessors has already been published in open sources.

The press service of the company "Tyazhmash" published a photo of one of the experimental machines of the complex "Podlet-M-TM", which allows you to create an approximate picture. The published photo shows a wheeled vehicle with special equipment, built on the basis of a serial four-wheel all-wheel drive chassis of the KamAZ brand. Perhaps, the car "KAMAZ-6350" or a newer car with similar characteristics is used. The use of such a chassis provides radar with high mobility on highways and rough terrain, and also greatly simplifies operation and maintenance.

In the front of the used chassis, the standard cab of the bonded layout is retained. Directly behind it is a large enclosure that holds all the necessary systems and carries pull-out devices. The body is equipped with a metal case of a relatively simple box shape with vertical sides and a horizontal roof. To stabilize the machine during deployment on the position of the body with special equipment equipped with two pairs of hydraulic jacks. One is located behind the second pair of wheels, the other is at the rear of the hull. Mounts are provided on the hull walls to install a spare wheel, ladders, tools, etc.

At the rear of the machine, apparently, there is a swinging installation, which serves as the base of the antenna mast. In the stowed position, the mast, together with radio electronic equipment, is laid on the roof of the hull by turning it forward and down. When deployed, the reverse process. It can be assumed that for a more stable position when working the mast rests on the ground. Lifting the mast and removing the antenna into the working position are likely to be carried out using hydraulic actuators. According to reports, the Podlet-M-TM project provides for the fastest possible deployment of an antenna post at a given position.

Any information about the used antenna or radio-electronic devices inside the case, no. The official reports mentioned high positioning accuracy in any terrain, which may indicate the use of modern navigation systems of one type or another.

The radar characteristics of the new type were not reported. Nevertheless, there is information about the purpose and capabilities of other stations in the “Plet” family. There is reason to believe that the new complex “Podlet-M-TM” retains the main functions of its predecessors, although it differs from them in one way or another.

Details of the Podlet radar station were published by the Ministry of Defense in December last year. In the middle of the month, the latest mobile radar of the Flying regime was put on combat duty in the radio engineering regiment of the aerospace forces responsible for the air defense of Moscow and the central industrial region.

The Department of Information and Mass Communications of the Military Department reported that the “Podlet” station is designed to monitor the air situation and detect targets at low and extremely low altitudes. At the same time, the complex is able to find targets over wooded middle terrain, as well as under conditions of use of passive, active or combined interference by the enemy. Also, the station is able to continue to work when trying to fire suppression.

The mobile performance complex is a three-coordinate circular view station belonging to the class of so-called systems. combat mode. The “approach” can automatically monitor the surrounding airspace, detect various objects, take them to escort and determine the coordinates, giving them out to other means of air defense. It is alleged that the station is able to find and accompany aircraft, helicopters and cruise missiles, including those built using stealth technology.

Arriving at this position, the Plytt Radar, which incorporates three self-propelled vehicles on an automobile chassis, performs deployment in just 10 minutes and after that can monitor the air situation. Flight tracking of aircraft is provided at distances up to 200 km and at altitudes up to 10 km. The complex's electronics can simultaneously accompany up to 200 targets. Together with the discovery of the target, the determination of its nationality is carried out. Information on the found targets, calculated with high accuracy, is given to various consumers.

The available characteristics allow the Podlet radar station to solve assigned tasks, working as part of an echeloned anti-aircraft defense detection system. The use of such stations provides enhanced control over the airspace at low altitudes - an area of ​​increased danger. In this role, they can be used to protect cities or other important objects. Apparently, this applies both to the Podlet radar that has already been put on combat duty, and to the newer Podlet-M-TM radar, which recently completed state tests.

A prototype of a promising radar complex in the early spring coped with state tests. The development of VNIIRT and the Tyazhmash plant was highly appreciated, and in addition, the project participants were commended by the customer. According to the results of the tests, the military department will probably have to resolve the issue of adopting the Podlet-M-TM radar into service, and then initiate the mass production of such products.

Mass mass production of low-altitude radar stations of the promising “Podlet” family, including the newest “Podlet-M-TM” systems, will strengthen the existing grouping of air defense detection systems and, accordingly, increase the country's defense capability. Not so long ago, another step was made in this direction: a new model of equipment coped with the necessary tests and could soon take over on duty.