Self-defense problems Tu-160М2 in strategic operations. How to survive in a terrible sky in the XXI century? 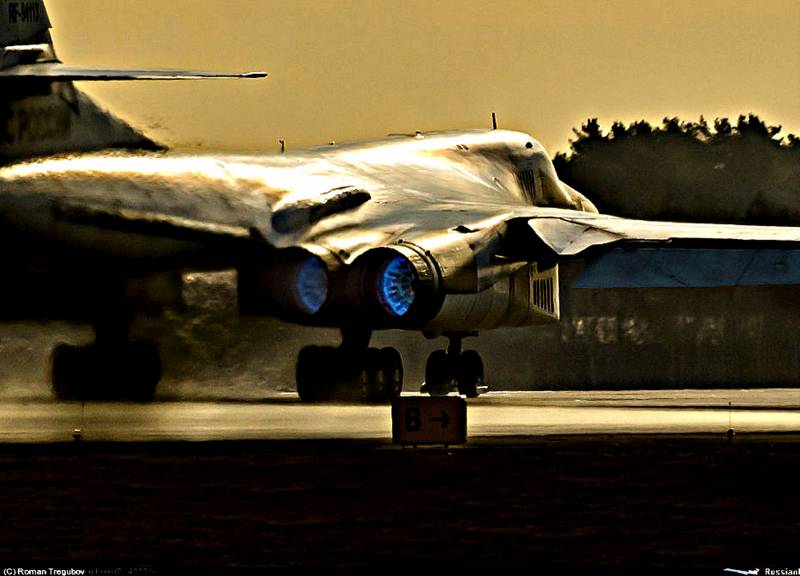 We can say for sure that the degree of hopes placed by the Russian Aerospace Forces for a deeply modernized version of the White Swan strategic bomber-bomber with the Tu-160M2 index is clearly not inferior to the level of interest in the design of a promising long-range aviation complex aviation (PAK YES), also known under the designation "Product 80". Unfortunately, our specialists from PJSC Tupolev, after consulting with representatives of the Moscow Region and the VKS command, decided to follow the “state” concept of promising strategic aviation of the next generation (a machine whose glider is designed according to the “flying wing” scheme will be subsonic), while At that time, the Chinese companies Xian Aircraft Industrial Corporation and Shenyng Aircraft Corporation went their own way, starting designing the supersonic 2-fly concepts of medium and long range H-18 and YH-X. Let us hope that the low subsonic speed of the PAK DA will be more than compensated by ultra-low radar signature, unique airborne radar equipment and an impressive combat load in the internal arms bays. And now let's move on to the more famous project of the improved Tu-160M2.

The radar signature of the updated “Blackjack” (“70 Products”), of course, will not come close to the EPR of the PAK DA being developed, but the main advantage is that the speed in 2000 km / h, the missile carrier will continue, and hence the time for launching the main rocket armament (CKR X-555, X-101 and perspective X-DB) will be reduced approximately 2 times. In conditions when the air theater of military operations is saturated with 5 generation fighters capable of supporting the flight at supersonic cruising speeds in the 1,5, the high speed of the Tu-160М2 looks very, very attractive, and in a certain tactical situation it can provide an opportunity to put a preemptive attack on the enemy point punch; PAK YES, operating at speed in 900 - 950 km / h, is not capable of such a "throw". According to the commander-in-chief of the Russian Air and Space Forces, the elemental base of the Tu-160М2 avionics will receive 60% new digital modules. The prospective information field is expected to be integrated: the dashboards of the first and second pilots, as well as the operator and operator-navigator, will be equipped with high-resolution wide-color LCD LCD MFIs that comfortably and clearly reflect the smallest tactical details on the theater of operations received by the onboard radar complex, warning station irradiation, as well as taken from third-party means of electronic and electronic intelligence.

It is also known that the upgraded “strategists” will receive more economical improved bypass turbojet afterburning engines NK-32 02 series, which will bring the radius of action to 8000 km with a normal rocket-bomb load and to 6000 km - with a maximum load. The overall combat effectiveness of the machine should increase almost 2 times due to the introduction of network-centric avionics and new indicator systems. A separate item is the stinging inertial navigation system BINS-SP-1, which will allow the White Swan, even without correction via the GLONASS radionavigation system satellites, to clearly define its location, including when it reaches the missile launch line. The BINS-SP-1 hardware unit can interface with almost all modern avionics modules and weapon control systems due to the availability of the common MIL-STD-1553B data bus; There is also the possibility of using the ARINC429 bus. This freestanding INS is distinguished by excellent reliability (time between failures is almost 95 days), low weight and compactness of hardware (70 kg and 12,3 dm3, respectively), as well as 24 channels for receiving additional navigation information from third-party tools. The “heart” of the system is the X-NUMX quartz accelerometer AK-3 and 15 CL-3 laser gyros, which ensure accuracy of determination of the roll and pitch angles ± 3º and the course direction error of no more than 0,1º without satellite correction.

It is absolutely clear that a strategic bomber-bomber with such abilities must be equipped with an advanced airborne defense complex (BS), which makes it possible to avoid enemy air defense missiles and guided missiles. Work in this direction has already begun. In particular, according to the statement of the Director General of Concern Radioelectronic Technologies JSC (KRET) Vladimir Mikheev, development work has recently started on designing a promising GCE for the new Tu-160М2, which is expected to “protect the aircraft from all types of missiles”. This complex will replace the previous generation BKO “Baikal”. “To protect the aircraft from all types of missiles,” sounds very categorical and encouraging. However, you need to consider the issue in detail. What do we know about the new complex?

According to V. Mikheev, he will be able to detect targets at a distance of several hundred kilometers. Obviously, this refers to the passive locating of radio-emitting ground and air objects, their classification and identification by the frequency of the electromagnetic signal emitted into space. In other words, the basic element of the new on-board complex of defense from KRET will be an advanced irradiation warning station (SPO), the accumulator of which will be loaded with a huge number of known radiation patterns of various sea, land and air-based radars, as well as active radar self-targeting radar systems of enemy enemy air defense missiles . The operator of "Blackjack" will be able to carry out detailed electronic intelligence in a radius of approximately 400 - 600 km from the aircraft. The second means of notification can be a promising high-resolution detection of attacking missiles (SOAP), which will replace the “Flame” heat finder located in the tail section of the Tu-160М2. It is likely that this station will be analogous to the SOAR, which is included in the defensive complex of the multipurpose MiG-35 fighter. This means that the detection range of approaching ASU will be of the order of 30 km, and the MIM-104C SAMs will be about 50 km. Opportunities for passive detection of enemy interceptor missiles, as well as their carriers, are very serious, but conceptually close to those possessed by the existing Baikal airborne defense complex; only the list of identifiable attackers will increase, as well as the accuracy and range of their direction finding.

An equally important element of the long-term military missile system for the Tu-160М2 will be the antenna complex of electronic countermeasures to the approaching interceptor missiles and the enemy's MRLS. In order for the future EW onboard station to effectively suppress remote observation and multifunctional radar complexes of enemy air defense systems, as well as active radar homing heads of missiles with directional interference, and even in different frequency ranges at the same time, it must be executed either as a distributed aperture from 4-x fixed compact active headlamps, or 2-x rotating cloths AFAR.

In the first case, the role of the main AFAR-producer of REP can be performed by a new on-board radar under the nose fairing; The second and third AFAR sheets will also be placed under the radio transparent nose fairing, but will serve azimuth angles ≥60 ° from the course direction Tu-160М2 (they will “look” at the sides, exactly like the antenna systems of the H036B-1-01L) Radar H036 "Squirrel" for the T-50 fighter PAK FA); the fourth canvas AFAR should work on the rear hemisphere (LPS). As you can see, we have a full-fledged distributed aperture from AFAR stations that emit any type of radio-electronic interference (from sighting to barrage or imitation). If we consider the second, simplified, configuration of an EW station (2 rotary canvases AFAR), then 2-e and 3-nasal canvases are simply excluded, and promising radar and tail AFAR emitter equipped with actuators act as jammers rotation following the example of the famous European radar "Captor-E" for fighters "Typhoon". Electronic control of the directivity pattern of this aperture will be carried out by target designation from the ACT, which is part of the onboard defense complex.

Only the use of active phased arrays (in the radiating path of the electronic warfare) as part of a promising operational control unit can significantly increase the security of the upgraded White Swan from various types of interceptor missiles, other types of simpler emitters can operate only in a narrow frequency range, which is hardly allowed to withstand ARGSN missiles operating simultaneously in the X / Ku / Ka-ranges of centimeter and millimeter waves. Serious problems of the perspective onboard Tu-160М2 defense complex can also be created by sophisticated targeting modes of modern medium-range and long-range air defense missiles. There are no fools in Raytheon either. For example, in order to circumvent the electronic countermeasures of our Tu-160М2 BKO, interceptors such as AIM-120D or RIM-174 ERAM (SM-6) can be loaded into an inertial navigation system such that inertial targeting with radio correction will act directly to the target. The radio correction itself can be carried out by target designation from the AN / AAQ-37 DAS infrared detection and tracking system of the F-35A fighter, which will detect infrared radiation from the most powerful Tu-160М2 engines at a range of 150 - 250 km. It is the infrared sensors that are the most reliable means of determining the exact coordinates of the enemy when his board is the radio-electronic jammer. When approaching with the “strategist” on 2 - 4 km, ARGSN will turn on, and our Blackjack BKO may not technically be able to catch the enemy’s missile in a couple of seconds.

For the "diversion" of interceptor missiles with promising bispectral infrared GOS, infrared traps alone cannot also be considered a panacea. Highly sensitive matrices are capable of receiving thermal radiation of medium (3 - 5 μm) and long (8 - 12 μm) waves. There are also such samples of rockets, the working range of IKGSN which covers extremely short and medium waves (from 0,5 to 5,4 µm), thanks to this, the selection capabilities of the IKGSN program filters will be greatly improved: jet engine flares can be easily distinguished against the background of IR traps. One of these missiles is the British AIM-132 ASRAAM melee combat fighters. To avoid interception with similar missiles, the Tu-160М2 should be equipped not only with ordinary containers with IR traps, but with specialized optical-electronic countermeasures such as “Vitebsk-25” or “President-S”.

And even all of the above configurations of the advanced on-board defense system from the CRET will not completely protect the Tu-160М2 from the missile defense system and the new generation OURVV, and therefore you should not literally take V. Mikheev's statements about the “full protection” of our strategic bomber-bomber from all types of missiles. Nevertheless, the implementation of a full-fledged anti-missile self-defense Tu-160М2 today looks like a very real program that will require only minor processing of the internal weapons bays, as well as the installation of compact AFAR-radar for detecting and “capturing” the enemy’s incoming missiles.

Prospective super-maneuverable short-range and medium-range anti-missile for tactical aviation self-defense of the US Air Force "SACM-T" ("CUDA") from enemy interceptor missiles. The product is based on AIM-120C AMRAAM, but has slightly reduced aerodynamic planes and is 2 times shorter than the length of the “carrying case”. To increase the maneuverability and kinetic destruction of enemy missiles, a nasal “gas-dynamic belt” of transverse control was used.

The short-range (melee) Р-73РМД-2 or РВВ-СД adapted for intercepting enemy air missiles and missiles can be easily used as antimissiles. Launched from the specially provided “small” weapons compartments, the P-73RMD-2 will be able to intercept enemy interceptor missiles even in the rear hemisphere due to the super-maneuverability provided by the interceptor thrust vector deflection system.

RVV-SD is more suitable for self-defense against missiles moving by inertia (with a burnt solid-fuel charge), because the infrared homing head P-73 will be much more difficult to “capture” the “cold target” (aerodynamic heating at a speed of 1500 km / h is insignificant) than the active radar homing missiles RVV-SD. The only known anti-missile project for combat aviation self-defense is the American SACM-T, previously known by the acronym CUDA. Now they are trying to bring it to the level of operational readiness, after which it will be much more difficult to resist the US Air Force. It is time for us to secure our strategic air fleet of this kind with impeccable defensive ammunition.