“Sea Devil” of the USSR: whether the jet bomber LL-600 will revive 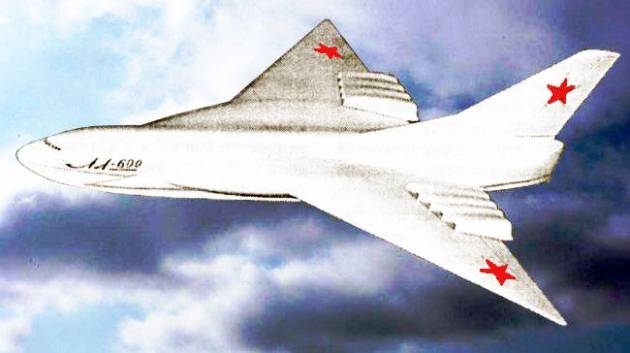 The beginning of the twentieth century was marked by an industrial and technological boom, which led to the rapid industrial development and the emergence of new machines, units and equipment in general. Also in the 20 century there were several wars, which together with the development of enterprises led the world to the era of fundamentally new military equipment. Engineers from many countries invented a strange weaponwhose power and characteristics can strike the minds of even a modern person. And it is not surprising that our compatriots were among the geniuses of design thought.

This article will focus on the major general of the engineering and technical service, aircraft designer Georgy Mikhailovich Beriev and his brainchild - the LL-600 hydro-jet bomber, which, unfortunately, did not have time to swim in the rays of glory. However, by the standards of its time, the aircraft was very progressive and due to its characteristics and abilities it could gain the fame of a real "Sea Devil".

Georgy Mikhailovich Beriev - one of the most unknown of the famous aircraft designers in stories aircraft manufacturing of the Russian state. This engineer, without exaggeration, is the founder of the marine aviation Russia and the progressor of the marine aircraft industry. Thanks to him, the world saw the MBR-2 flying boat (built in 1931). This is the most massive pre-war seaplane, which later participated in World War II as a reconnaissance aircraft. It was used for close reconnaissance and sometimes long-range.

Later Beriev designed the first in the USSR flying boat with a turbojet engine, which was named "R-1". True, the seaplane was not completed, since the project was closed. But even then, the designer showed his full potential, creating a water-based bomber, which was not inferior in speed to the American McDonnell FH-1 Phantom and Grumman F9F Panther fighters.

Despite a number of failures, the Soviet aviation engineer built and put into operation the machine. For example, Be - 10 - jet seaplane, which owns world speed records for this type of technology. It is noteworthy that they have not been beaten yet - 912 km / h. Of course, it is impossible to ignore the legendary Be-12 "Seagull", which was used to combat enemy submarines and could use the breakthrough nuclear depth submarine bombs 5ФХNUMX. The most interesting thing is that this aircraft was amphibious, that is, it took off both from land and from water. There were other aircraft, each of which had its own unique characteristics. However, one aircraft deserves the most attention. 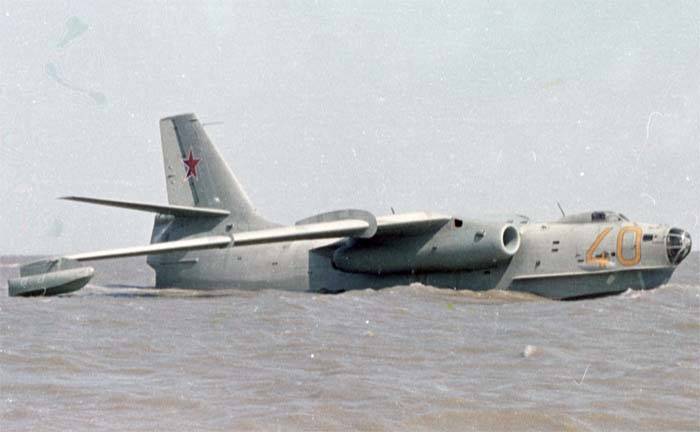 The Be-12 demonstrated that jet seaplanes could be successfully used as part of military operations, but one task remained to be solved: how to make the bomber fly across the ocean to complete the task and return? And the answer was found - to refuel the aircraft. Only this was done in a specific way, and it was for this that the LN 600 was built. 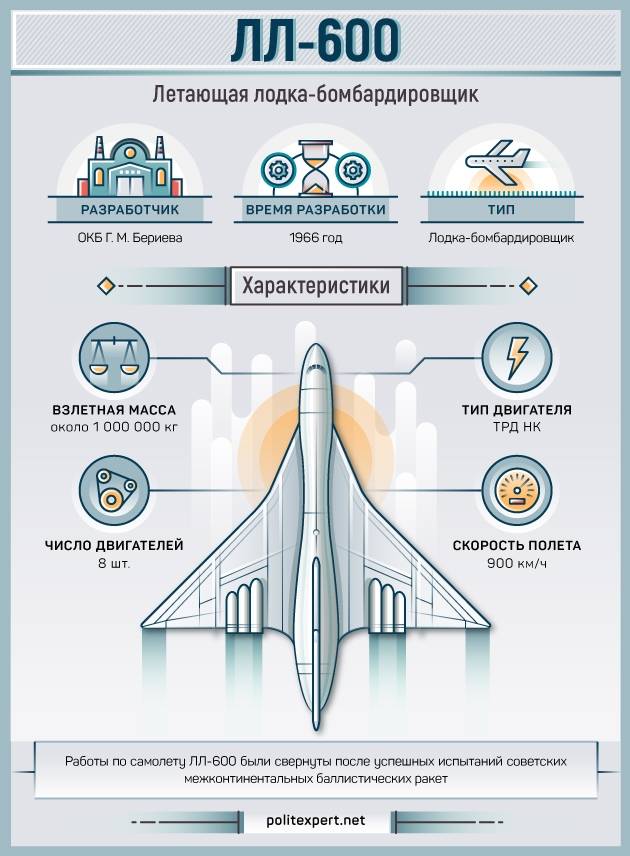 This aircraft is essentially a giant heavy flying boat. The seaplane is built on the principle of a “flying wing” with a triangular shape. The project LL-600 was developed under the guidance of G.M. Beriev in the OKB TMZ (Beriev OKB), and the conceptual sample appeared already in 1966 year.

The characteristics of the hydro-bomber were amazing. Yes, they still make you think about a lot. The takeoff weight of the aircraft was 1 kilograms. Eight turbojet engines "TRD NK" lifted the car into the air. Such power made it possible to develop a speed of 000 kilometers per hour. In fact, no one in the world could build a combat flying boat with such indicators.

A distinctive feature of this car was that it could covertly refuel directly into the sea. That is, not in the air, as the M-4, Tu-16 and Tu-95 did, but with the help of submarine tankers or specialized containers. To carry out a covert meeting of the aircraft with the containers placed at sea, according to one of the projects, a signal bomb with a series of charges was dropped from the aircraft when approaching the refueling site at a distance of 200-300 kilometers. After triggering in a certain sequence of charges, the hydroacoustic receiver of the container gave the command to ascend and turn on the drive radio station and visual detection equipment into standby mode. Thus, the entire ocean or sea became a huge airfield. The military assumed that the LL-600 would be used to strengthen naval and anti-submarine aviation. The genius of the LL-600 lies not only in the fact that it can rise from the water with a huge mass, but also in the fact that the aircraft, despite its weight, remained buoyant, unsinkable and stable.

In an interview with PolitEkspert, a military expert, the former head of the anti-aircraft missile forces (2007-2009), the special forces command of the Russian Air Force Sergey Khatylev revealed information on weapons and combat capabilities of the LL-600. 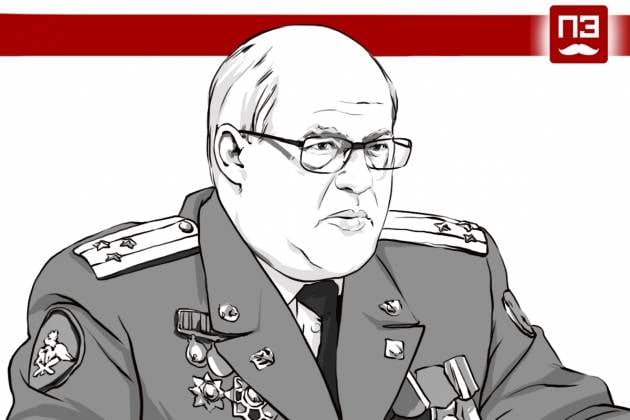 The expert explained that the project of the hydro-bomber was not limited to use only at sea. There were other variations.

“LL-600 is not only a flying bomber boat, it was also developed as a torpedo bomber. He could fight both submarines and enemy ships on the surface. It is known that in the arsenal of the aircraft were depth charges. Also, the seaplane had standard weapons of its time, including cannon weapons, ”explained the interlocutor of PolitEkspert.

We can not exclude the option that the LL-600, which was largely a follower of the Be-12, could also use nuclear depth charges.

Unfortunately, despite the success of the project, it had to be closed, since ballistic missiles were successfully tested in the USSR. The new weapon eliminated the risks of delivering an aircraft to the conflict zone, which, among other things, also needed to be refueled at sea. Moreover, the very doctrine of the use of naval military forces has changed and new technologies have appeared. Heavy seaplanes were replaced by light, powerful and supersonic fighter-bombers. They were not only easier to manage, but easier to maintain. Of course, it is impossible to ignore the fact that aircraft carriers have appeared.

The right to revival

However, the cessation of the massive construction of military seaplanes does not mean that they put an end to such promising aircraft. Many of the military projects feel quite well within the framework of civil aviation. However, the combat designation of such units is still possible.

The fact is that seaplanes have one indisputable advantage - they take off from the water. This means that this type of equipment can be successfully used in remote regions where, for some reason, it is impossible to build a large land military airfield. Moreover, Sergei Khatylev is sure that under certain circumstances, the construction of military hydro-bombers can be resumed.

“Today, the old Be-12 is actively used not only in Russia, but also abroad. Even Indians buy it. Some decommissioned, broken aircraft of this model are bought back from us in Russia and repaired, and then successfully used for civilian needs. For example, through the same Be-12 they deliver mail, things on Sakhalin, the Kuril Islands and some other remote regions, ”Sergey Khatlyev shared his experience.

In conclusion, the expert explained that today there is a concept for the development of such aircraft and it is being implemented. True, the special publicity is not given, but the modernization and development of new aircraft is in full swing. Therefore, it cannot be excluded that in the near future new hydro bombers will appear.