The same age of the German Mauser is the Russian rifle of the 1891 model of the year (part of 2). Documents continue to tell ...

It’s time to notice that this material would never have appeared if it had not been for the courtesy of Nikolai Mikhailov from St. Petersburg, who volunteered to work with the archival materials of the Museum of Artillery and communications troops, as well as the kind assistance of its employees and, in particular, the guardian of the archive Svetlana Vasilyevna Assumption. All materials of interest were filmed by them, and then used in this work, as well as an article by Tatiana Ilina on “The Fate of a Rifle”, first published on the pages of the St. Petersburg magazine “Eagle” back in 1991 year. Photocopies were “translated” into printed form, since in the handwritten version they are extremely difficult to understand, both because of the peculiarities of writing the words by hand with a fountain pen, and, in fact, the peculiarities of the then Russian language. Interestingly, in all documents the name “Mosin” is written with two “ss” - “Mossin”.

However, when reviewing this contract, the main regulatory commission on rearmament of the army drew attention to its 12 point and asked whether it was necessary to pay the premium to the Nagan if its rifles were not fully adopted, but only partially. According to General Sofiano, “the guns of Nagan are almost identical with the guns of Mosin and, in all likelihood, even if the system of the first is accepted, then some parts in it will have to be changed in accordance with the system of Mosin. Therefore, it is quite possible that there will be a wrangling over the payment of the Nagan 200 000 ”[7]. That is, the Russian generals knew perfectly well that when using the very best of two rifles in one sample, there could well be a conflict of interests and copyright. 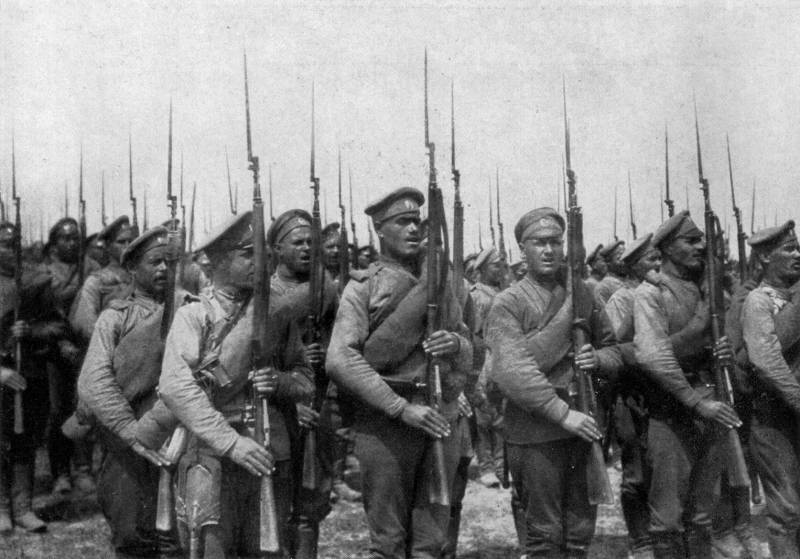 Soldiers of the Russian Imperial Army with Mosinsky rifles on the Thessaloniki Front, World War I.

Anticipating some friction, they decided to start negotiations with Nagan in advance, and his own statement, made by him in a private conversation with Kryzhanovsky, that he would be satisfied with a reward of 75 thousand rubles, was taken as a starting point. This task was not easy to be assigned to a military agent, Colonel N.М. Chichagov. The Minister of War ordered him to incline Nagan to an even smaller amount, namely, to 50 thousands of rubles. It must be said that Nagan’s letters, which deal with the peculiarities of this transaction, characterize him as an entrepreneurial, quick, persistent. Never in his correspondence did he meet with claims to include his name in the name of the rifle - whether it is in him or not, in fact, he was indifferent. But he was very concerned about the reimbursement of the costs of fulfilling the Russian order. Therefore, Chichagov could not carry out this assignment. 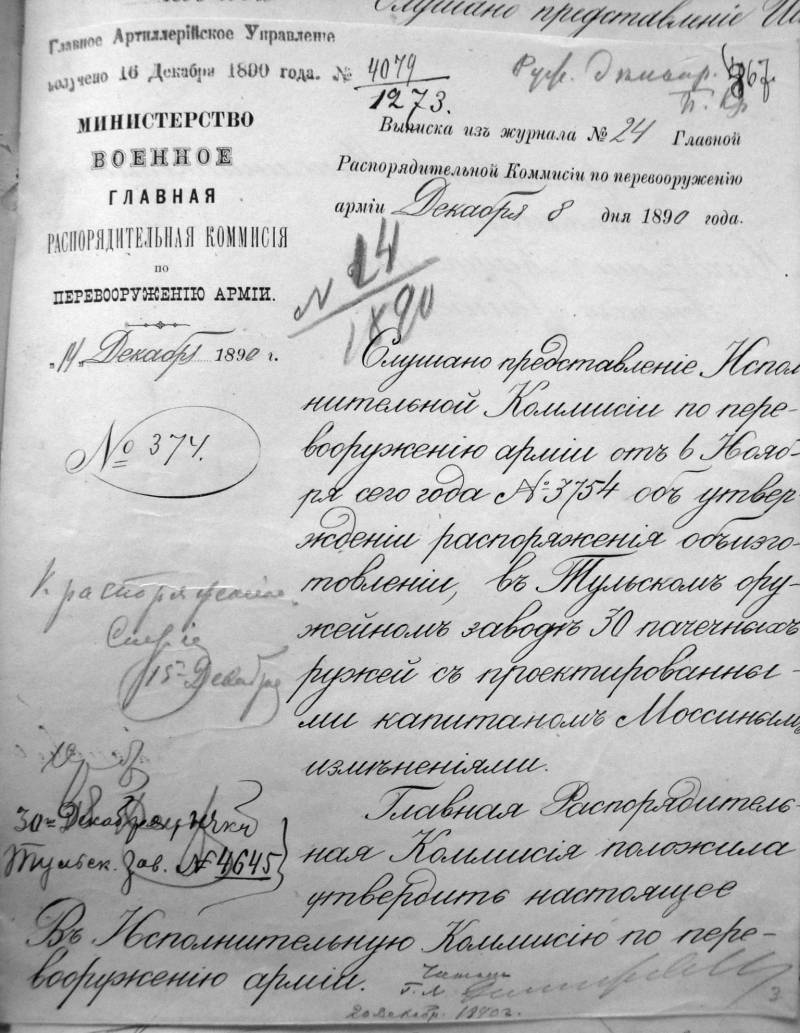 As can be seen from the text of this document, all costs for the manufacture of Mosin rifles must be attributed to the costs of the treasury, that is, the costs of the state. Whereas L. Nagan carried his expenses privately and, naturally, counted on their compensation. (Archive of the Military Historical Museum of Artillery, Engineers and Communications Troops. F. 6. Op. 48 / 1. D. 34. L. 867)

The archival documents retained the mention in the journal No. 84 of the Main Administrative Commission of the “issuance of 200 000 rubles to Nagan, both in the case of the gun’s acceptance of its system as a whole and in the adoption of only some of its details”. Moreover, a week later after signing the contract, namely 20 of October 1890, Nagan sent lieutenant-general Kryzhanovsky letters claiming infringement of their rights of the inventor on eight points regarding a number of parts and assemblies of the new rifle. “I have reason to believe that the gun, similar to mine, was not in Russia either in March of this year, or when I presented it last year,” he wrote. The commission for developing a small-caliber rifle reviewed this letter in the journal (protocol) of 9 in March 1891 of the year presented its views on the issues raised as follows:

1. Does Nagant really have the rights of the inventor to the parts of the gun he named?

4. What did Mosin borrow from the gun of the Nagant system?

5. What is independently developed by Captain Mosin in his gun?

The commission examined all the circumstances of this case and came to the conclusion that Nagan has the inalienable rights of the inventor to almost all the details he named. Here is how! That is, his primacy as a designer of a new rifle was officially established by competent experts! The document, which was signed by all members of the commission, had the view shown in the photo below. Its content is as follows: 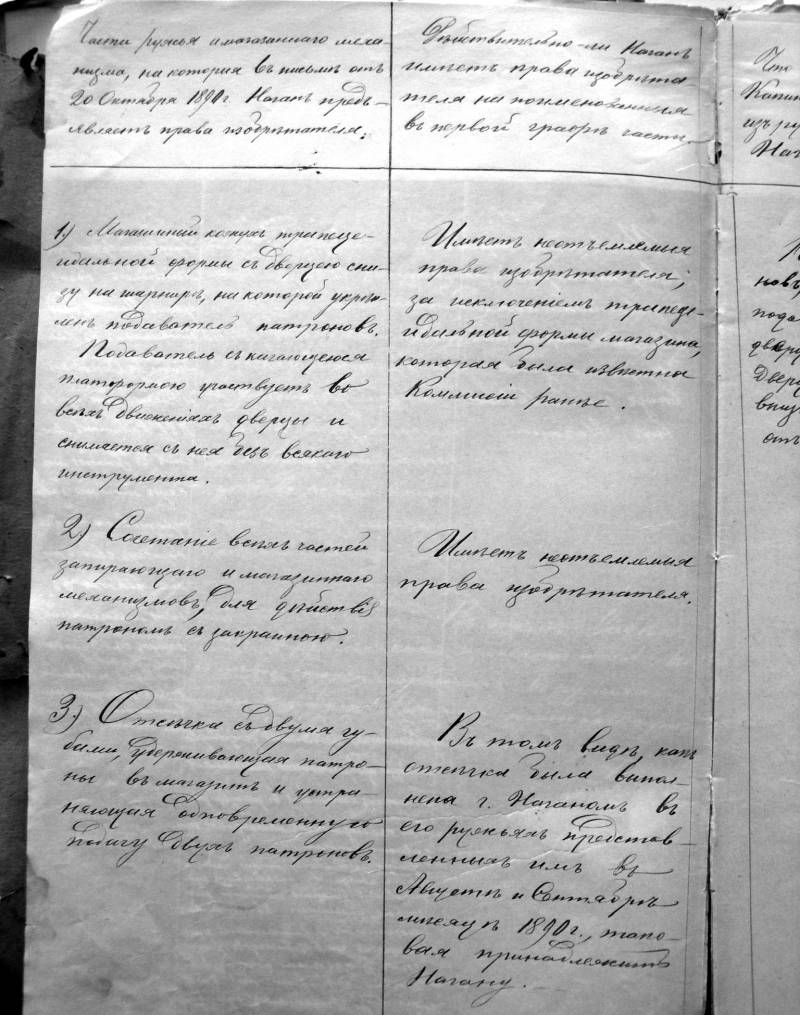 “Parts of a shotgun and a magazine mechanism, on which, in a letter from 20 of October 1890, Nagan claims the rights of the inventor.

1) Trapezoidal magazine casing with a door at the bottom on the hinge, on which the cartridge feeder is fixed.
The feeder with a moving platform participates in all movements of the door and is removed from it without any tool.
2) A combination of all parts of the locking and magazine mechanisms for the action of the chuck.
3) Two-lip cut-off, holding cartridges in the magazine and eliminating the simultaneous feeding of two cartridges.

Does Nagan really have the rights of the inventor to the parts named in the first column?

It has the inherent rights of the inventor, with the exception of the trapezoidal shape of the store, which was previously known to the Commission.

Have the inherent rights of the inventor.

In the form in which the cut-off was carried out by Mr. Nagan in his guns, which he presented in August and September of 1890, this belongs to Nagan.

What did Captain Mossin borrow from the gun of the Nagant systems?

The feeder of cartridges, the room of the feeder on the door and the opening of the door of the store down borrowed from Nagan.

Guided by a genuine model of Nagan, presented to the Commission in October and November 1889, Captain Mossin, in December of the same year, making the first sample of his gun, made a magazine cover with a door and a feeder similar to it Nagana.

Parts of a shotgun and magazine mechanism, on which, in a letter dated 20 of October, 1890, Nagan claims the rights of the inventor.

5) Slide fastener, one integral part of the descent and its combination with the protrusion on the bolt.

6) A fuse placed in the gun of the Nagan on the left side of the receiver and at the same time jamming the bolt and the trigger.

Does Nagan really have the rights of the inventor to the parts named in the first column?
In the form in which it is made in the guns of Nagant, belongs to him.

Belong to Nagan. In the form in which the fuse is made in Nagan's guns, it belongs to him.

What did Captain Mossin borrow from the gun of the Nagant systems?

Kind of, as in gun Nagan.

The fastener in Captain Mossin's shotgun is completely different from the Nagant fastener.
The shutter is held in the gun box, separated by a strap, resting against the end of the groove in the shutter lag. Planck that offered Captain Mossin.
In one of the single-shot guns of Captain Mossin, which he had previously introduced to the appearance of the Nagan guns, a fuse was used, similar to the Nagan fuse, which differs, however, in details from the latter.
In the subsequent models of guns, Captain Mossin replaced the separate fuse with a lug on the trigger and a cutout on the bolt. For jamming the shutter and the trigger you want to turn the trigger to the left.

Parts of a shotgun and magazine mechanism, on which, in a letter dated 20 of October, 1890, Nagan claims the rights of the inventor.

7) Bundle or holder on 5 cartridges with protruding cuffs. The cartridges of the pack effort of thumb down into the casing.

8) Vertical grooves in the receiver, designed for inserting packs into them when loading a gun, and a solid jumper in the box.

Does Nagan really have the rights of the inventor to the parts named in the first column?

The idea of ​​filling the store and the form of a pack, from which cartridges go down to the store with a finger, belongs to Nagan.

In the form in which it is done in the guns of Nagant, belongs to the inventor.

What did Captain Mossin borrow from the gun of the Nagant system?

The way of filling the magazine by lowering the cartridge round with a finger, and, consequently, the grooves in the receiver were borrowed from Nagant.

Mosin did not agree with these conclusions, but the Commission insisted on its own. True, the members of the Commission invariably emphasized the special device of the bolt, invented by Captain Mosin, and the combination of this bolt in action with all the magazine mechanism available in the rifle.