A revolver for cheaters and pimply high school students: "Harrington and Richardson" 32-caliber

March 30 2017
31
It was always the case that there was someone who ... opened the way for others. And then he got followers. So, by the way, so-called “umbrella brands” are born. There was vodka "Smirnof". One "F" was replaced with "ff", the experience was recognized as successful and appeared: "Dvernoff", "Mehoff", "Dvernisageff", "Zamkoff". Is the same история was with my magazine Tankastr. Good, telling name, right? But ... after him appeared, “Aviamaster” (worse, but bearable), “Flotomaster” (very bad), and then “Standmaster”, “Minimaster”, “Master +aviation"(Quickly went broke!)," Master-gun "(the smoking-room is alive!) And even ..." Master-knife "! Only the magazine "Master of Love" is missing. Isn’t that stupid? But the names are one thing. It also happens that people create a lot of similar designs, all of which differ from the basic models is their size or finish. 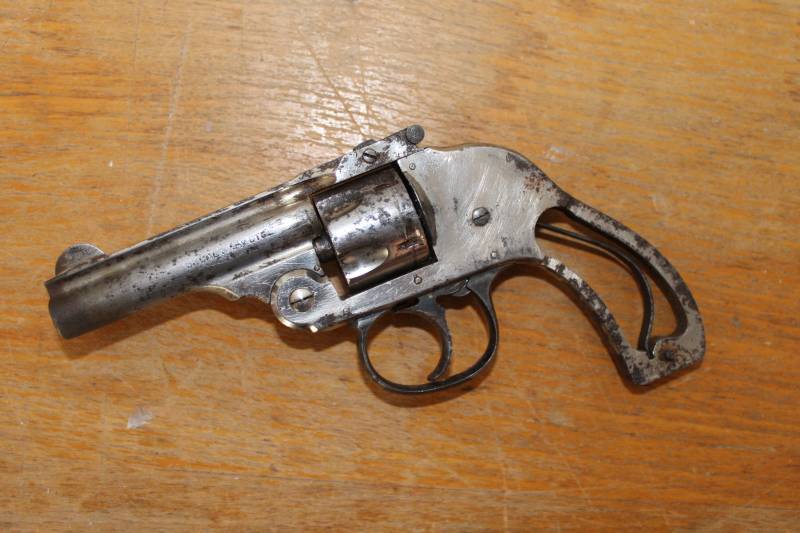 Here it is - a revolver “Harrington and Richardson” 32 caliber “Hammerles”, that is, beskurkovy. The revolver you see in the photo is very high quality, although it suffered from time to time. By design, it is very similar to the Smith-Wesson revolver No. 3. The barrel is round with a top bar into which the front sight is embedded; the rear sight is a simple slot in the trunk latch raised behind the tide. When the latch is raised, the barrel can be lowered down by 90 degrees, after which the automatic extractor is ejected, pushing the spent cartridges out of the drum.

Here, for example, Samuel Colt created a good line of revolvers, and immediately the Remington company launched the exact same revolver. There are only two differences: a closed frame and the tide on the lever, which is slightly more convenient in terms of retrieving a revolver from a holster. And many other companies copied everything from the larger ones and started producing the same revolvers, only reducing them in size. Among them was Harrington and Richardson, founded in 1874 in the city of Worcester in Massachusetts by Gilbert Harrington and William Richardson. The company made a bid for cheap, but durable revolvers that could be hidden in a waistcoat pocket, and ... did not lose! 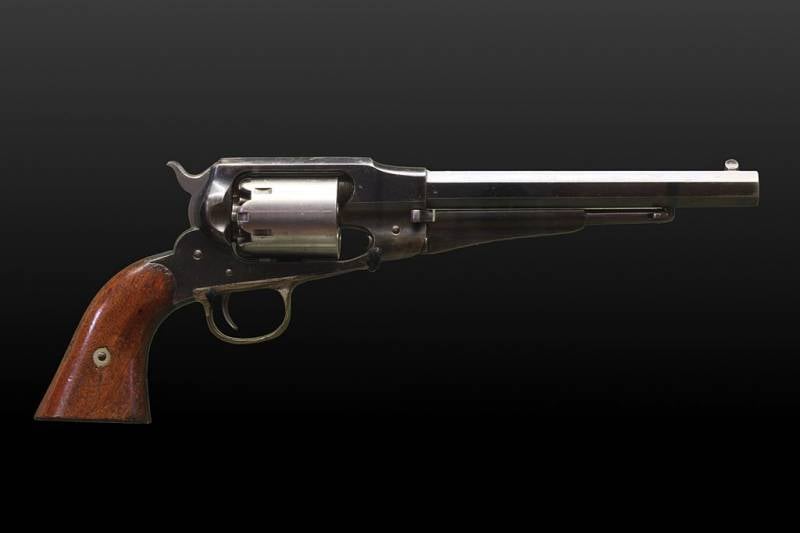 The first models of revolvers had an integral frame, and an advertisement about it immediately announced that it was supposedly a pocket weaponbut thanks to this very durable. Good advertising - the key to success, which in turn led to the fact that production began to grow. But at the end of the XIX, Harrington and Richardson decided to release revolvers with a drop-down box. The second innovation is an automatic extractor, as if these revolvers were planned for a long firefight. But ... but advertising can inform the consumer that he can buy cheaply a revolver equipped with an automatic discharging system. And how can one not buy one? What if it comes in handy? 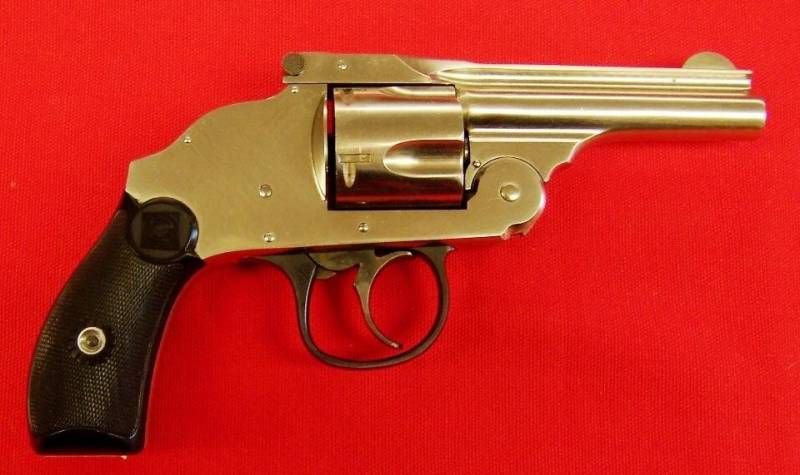 And this is how it looked when it was bought ...

Later, the company had other models of different caliber and with different trunks along the length. One of them was the Defender small-scale revolver (Defender) - small, simple and convenient, and most importantly, it was positioned on the weapon market as “automatic”!

Since the end of the twentieth century, these were very popular revolvers, created according to the Smith and Wesson type in .38 caliber with a simple-shaped handle and an automatically acting extractor. The barrel usually had a massive top bar with a built-in front sight. Well, it was revealed exactly the same way as Smith-Wesson, with the help of a T-shaped latch in the upper part, after pressing which the barrel went down, and at the same time the automatic extractor inside the drum was activated.

And although it was a pocket-sized weapon, a rather large handle was attached to it, giving a comfortable grip. So in the end, the revolver turned out to be a simple, but rather durable and reliable design.
The Defender pocket revolver from Harrington and Richardson had the following characteristics:
Overall length: 222 mm
Barrel length: 102 mm
Mass revolver: 0,7 kg
Caliber: .38 (mm 9)
Number of grooves in the trunk: 7
Number of rounds in the drum: 6
Initial speed of the bullet: 190 m / s

The seven-drum reel (just like that of the famous crooks) is removed from this revolver. The trigger mechanism of a revolver is of double action, and for this reason it is also bisexual, that is, it is especially convenient to carry in your pocket, although there were similar revolvers with a trigger and a needle protruding backwards. 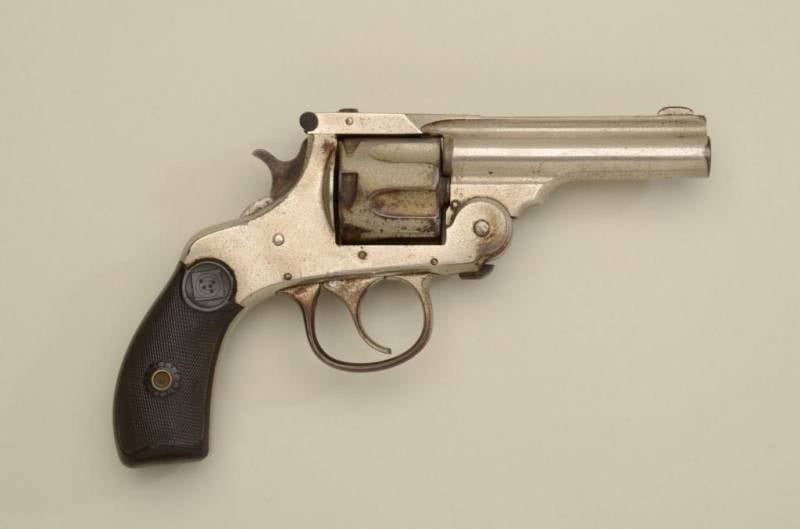 Model revolver with a trigger. The trademark of the company is clearly visible.

The cheeks at the handle were usually made of black volcanic stone, and on each of them there was a trademark of the company, which had the appearance of a target with traces of five bullets. However, there were also revolvers with cheeks made of bone and even nacre. Interestingly, since these revolvers in the United States were produced for export to the UK, they were stamped by Birmingham.

Naturally, this was not the only such company, but there were many of them. And who from whom, what borrowed, today already and you will not tell. "Hopkins and Allen" is a company that appeared in 1868 in Connecticut, where it produced various weapons, but mainly revolvers. At the end of the 19th century, she acquired the bankrupt Vorhand Arms Company in Worcester, Mass., And organized the production of the Vorhand revolver, model 1891 of the year. 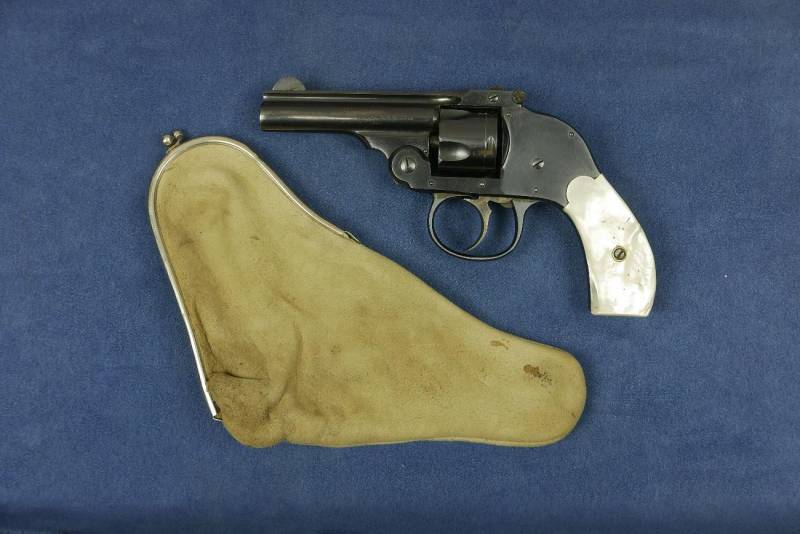 “Defender for ladies with mother of pearl handle and elegant suede holster.

It was a neat and compact revolver designed to carry in your pocket. The frame had opened, he had only to lift the T-shaped latch like that of Smith and Wesson.

A gear extractor was also installed on it, and in order to remove its five-charge drum from the central axis, it was necessary to press the front edge of the horizontal lever on the right side of the frame. The trigger pistol, with a double-action trigger, but still with a separate drummer, located inside the breech.

The handle cheeks are made of black vulcanite with the initials "H & R". For example, weapons manufactured in the United States and imported into Great Britain were marked with British inspector marks, that is, they are on this revolver, and it is indicated that it is approved only for firing cartridges with black powder. Its caliber was smaller than that of the previous revolver - 7,65-mm, bullet speed 168 m / s, but ... and it was quite possible to shoot from it on occasion. 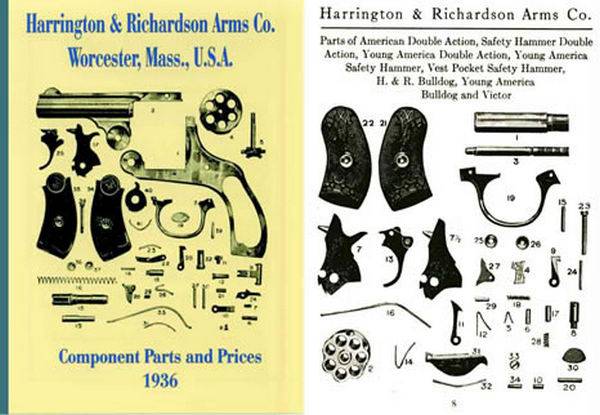 Judging by this advertising, these revolvers were produced and sold even in 1936 year! Enviable longevity for weapons of the beginning of the century!

Another company for the production of low-cost “small-format” revolvers in 1871 was the company of Ayver Johnson and Martin Bai. At first they worked together, but in 1883, Johnson bought out his partner’s share and organized his own company, Iver Johnson Arms Company, all in that Worcester in Massachusetts, and then in 1891, he moved to Fitchburg in the same state. Everything that they produced was practically the same as that of the Harrington and Richardson revolvers. Thus, the "brand diversity" was achieved, and most importantly - the owners of these revolvers could now argue with all the heart which firm the revolver is better, safer and at the same time ... cheaper!

Johnson's products differed from other pocket revolvers in nickel-plated case coatings, and in dark - trigger guard. In addition, both the trigger and the trigger were covered with stiff rubber, and they also featured an emblem that looked like a small coat of arms depicting an owl. The following inscription was engraved on the trunk: “IVER JOHNSON ARMS AND CYCLE WORKS FITCHBURG MASS USA”, the numbers of the corresponding patents were listed, and its serial number was indicated on the handle.

In the 1893, Johnson patented and launched a revolver into production under the complex and long name: “Automatic double-action model with a fuse,” and a year later he began to produce his non-smoking version.

The funny thing is that the word “automatic” got into the name of the revolver again because of the extractor! After all, he jumped out of the axis of the drum "automatically," which means that the revolver, too, was not any, but ... "automatic." 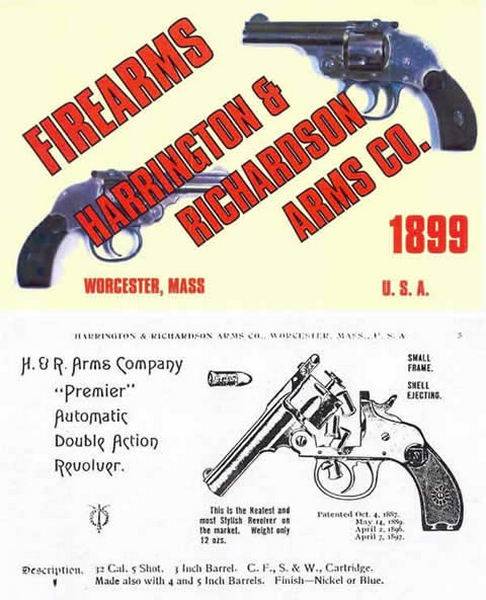 The most important difference between this revolver and the others was the presence of a fuse. Drummer is mounted inside the case, so the trigger beat on him through a special moving part. And the trigger mechanism worked only if the trigger was pulled to the end. Therefore, to shoot accidentally, say, from hitting something hard, this revolver could not.

Advertising revolver 22 caliber with seven-drum for various types of ammo. The focus of the advertising message, as you can see, is on the fact that it is non-smoking!

The revolver had a nickel-plated coating, except for the trigger and shackle; cheeks - black volcanite, each of which would have a medallion with a company trademark with an image of an owl. Revolver caliber - 7,65-mm, bullet speed - 168 m / s. Weight - 600 g. 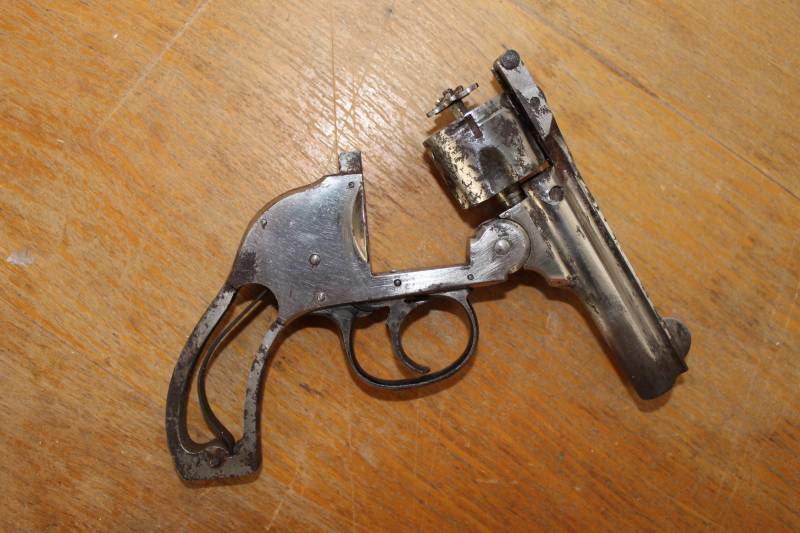 View of the revolver in the open view to the right.

Another company that produced pocket revolvers was Meriden. All the samples she had were the same as all the other companies listed above, except for such details as the front sight. It is in revolvers of this company is similar to ... old-fashioned hat. The following inscription is made on the trunk: “MERIDEN FIREARMS CO. MERIDEN CONN USA ”, and on the basis of the handle - the serial number. You can rate them as a rather low quality weapon. It is interesting that already at that time these revolvers were mainly sold by mail and at the same time were classified as “Sewiside Specials”, that is, “weapon for suicides”. 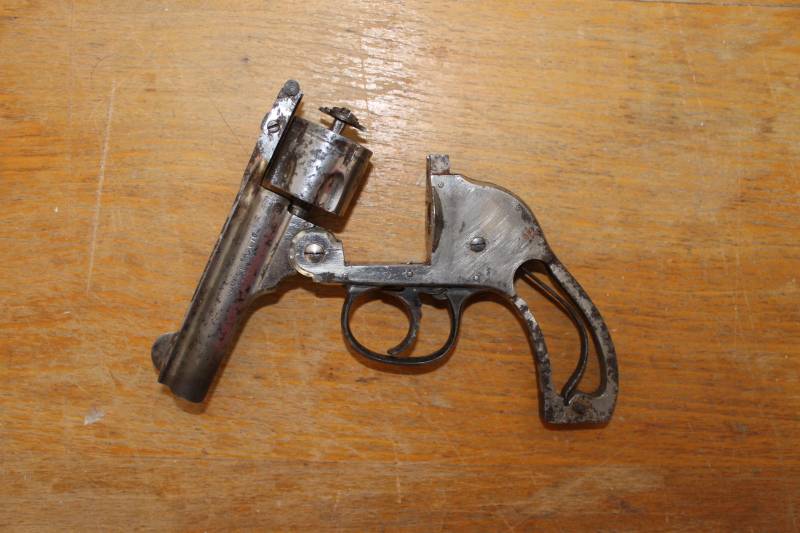 View of the revolver in the open view to the left.

Approximately all the same thing happened not only in the USA, and in Russia. Revolvers of the indicated class could also be ordered by mail, and it was relatively cheap to buy at the store, and ... from the hands of the market. Very often they were acquired by card sharks and ... schoolboys who got into unpleasant stories, be it card debts, into which a young man climbed by inexperience, a disease of syphilis after his first visit to a brothel, and there is little else. For all such cases, the Iver Johnson and Harrington and Richardson revolvers were the most suitable weapon. In any case, the authors of novels whose action takes place at the beginning of the twentieth century should bear this in mind!

Personal opinion. Never before had I kept such a strange weapon in my hands. A toy, not a toy, a weapon, not a weapon. If I were a child, perhaps possessing it would have caused me genuine delight, let alone shooting even more so. But for what this adult uncles and aunties bought, it is completely incomprehensible to me! You can understand even those who bought pocket "bulldogs". But these nickel-plated crafts are just suicidal and suitable!