March 15 2017
77
To date, Israeli developments in the field of active protection systems for armored vehicles have become widely known. This equipment is already in use at tanks and other combat vehicles of the Israel Defense Forces, and is also offered for export. Not so long ago, it became known about new plans regarding the use of active protection systems in the course of the future modernization of combat vehicles of combat units. In the foreseeable future, the implementation of such plans should lead to the re-equipment of the entire fleet of regular units.


According to the latest reports of the Israeli press and relevant foreign publications, not so long ago, the Israeli Defense Ministry signed another contract for the supply of Meil ​​Ruach active defense systems (KAZ), also known under the Trophy commercial designation. It is reported that the purpose of the concluded agreement is to modernize the tanks available in the troops, which are still not KAZ carriers. We are talking about armored model "Merkava" Mk3. The performance of such work should have a positive effect on the survivability of equipment and, as a result, on the combat potential of the armored troops as a whole. 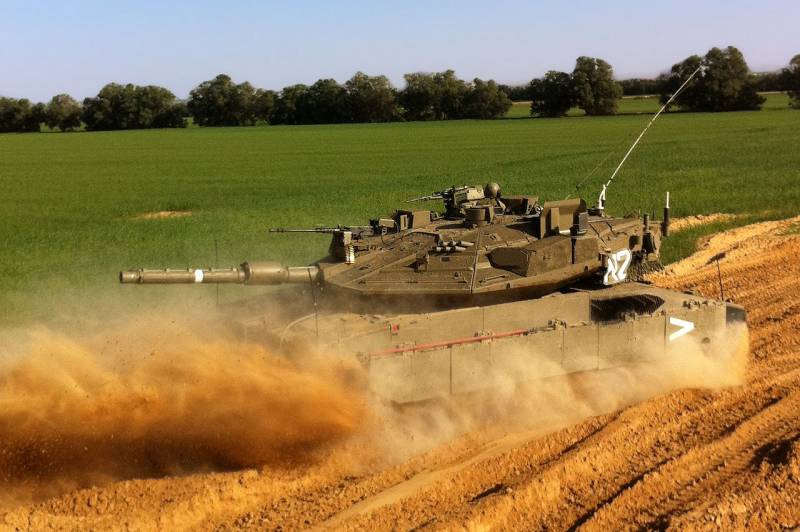 It should be noted that the issue of equipping the Merkava Mk 3 tanks with active protection systems is not raised for the first time. Over the past few years, this topic has regularly become a subject of discussion at various levels, but so far it has not been able to move beyond conversations. According to recent reports, the military and industry were still able to come to an agreement and conclude a contract to carry out the required work.

Recall that the active defense complex Meil ​​Ruach was commissioned by the Raphael company in cooperation with the Department of Defense Ministry’s research projects. According to some reports, design work on this system started in the mid-nineties. The creation of the project took about ten years. The official presentation of the future development took place in March 2005. After completing all the necessary tests, and also taking into account the experience of the combat use of armored vehicles in recent conflicts, the army decided to launch mass production and purchase new complexes.

The principal decision on equipping the existing KAZ Trophy tanks was made based on the results of the Second Lebanon-Israeli War 2006. After analyzing the experience of using tanks in existing conditions, the IDF command recognized the need to use active protection capable of reducing the risks for tanks and their crews. The first carriers of the KAZ "Meil Ruach" were to become the Merkava tanks of the Mk 4 model. After this upgrade, the tanks received the designation Mk 4M.

According to reports, to date, active defense complexes have received at least most of the Mk 4 tanks in the army. It is known that by the middle of 2012, the 4 I tanklot ha-Barzel 401 Tank Brigade was fully transferred to the Merkava Mk 7M vehicles. Last year, a similar rearmament of the Saar Mi-Golan brigade was completed. Exact information about the state of the 460 training brigade "Bnei Or" is not available. Perhaps a certain number of her tanks also received active protection complexes necessary for improved crew training. 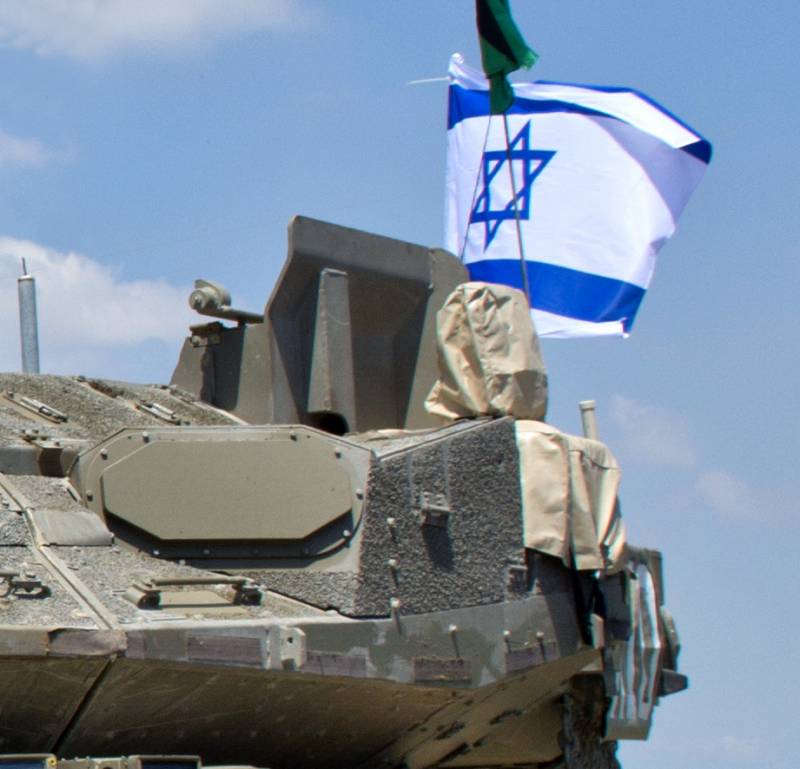 Of the four regular armored brigades that are currently part of the ground forces of the Israeli army, only one continues to operate previous models of equipment. The 188 Barak Brigade is still operating Merkava Mk 3 tanks. According to the latest data, in parts of this brigade, as well as in training and reserve subunits, there are currently 160 tanks of this model. As stated in the latest reports of the foreign press, in the foreseeable future, this technique should receive active protection complexes. At the same time, it is planned to upgrade only tanks Mk 3 188 of the brigade.

Due to the general atmosphere of secrecy traditionally created by the Israeli military, several important questions remain unanswered. It is not known when the work will begin on the modernization of new equipment and when the army will receive the latest updated machines. In addition, information on the number of active protection complexes planned for installation is not disclosed yet. Finally, the sources of foreign publications did not specify what kind of KAZ it is. Previously, Raphael announced the start of work on upgrading the Meil ​​Ruach system, aimed at improving its main characteristics. Thus, in theory, the Merkava Mk 3 tanks can receive both existing and future protection systems.

The implementation of existing plans, not so long ago enshrined in the new contract, will be of great importance for the Israel Defense Forces. The armored units of the Israeli armed forces have to work in specific conditions, because of which special requirements are imposed on the level of protection of equipment against various threats. In the middle of the last decade, it became possible to improve the protection of tanks against anti-tank grenade launchers and missiles. Once again faced with similar threats in Lebanon, the Israeli command initiated the modernization of existing vehicles.

Of the four regular AOI tank brigades, one of which is training, two are using Merkava tanks Mk 4. To date, all these armored vehicles have been upgraded, implying the installation of the KAZ "Meil Ruach" / Trophy. The remaining brigade still uses the tanks of the previous model, which have only their own armor, covered with additional security modules. After upgrading, similar to the previously conducted, part of the 188-th brigade "Barak" will be able to get armored vehicles with improved indicators of protection and survivability. In the context of the general development of the army, this will mean a complete abandonment of tanks without active protection in the regular units used during combat operations. 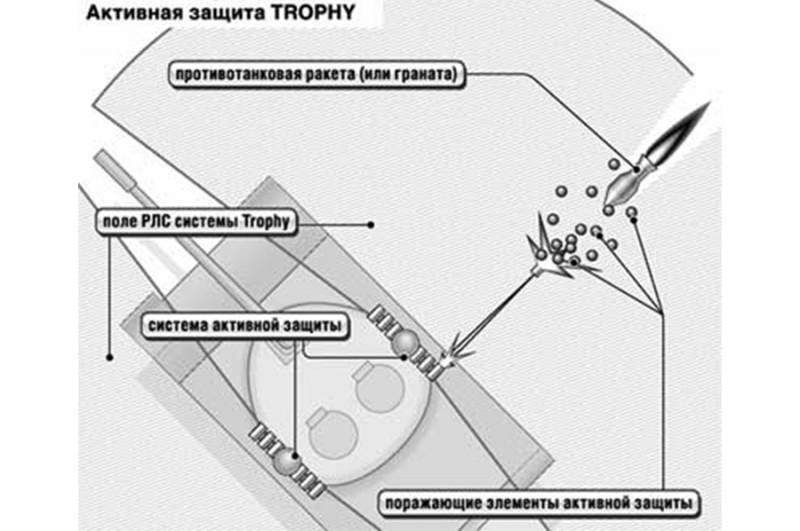 The principle of the active protection complex

At the moment, the Israeli armed forces use the “Meil Ruah” base model or the so-called first generation. This system, created by the mid-2000s, is a typical representative of its class and has the appropriate appearance. KAZ Trophy consists of several main units mounted on the outer surface of the combat vehicle and inside the protected volume. It consists of four small-sized radar stations, a control unit and two launchers of protective ammunition. The total mass of the complex - 771 kg. In the basic configuration, Meil ​​Ruach costs about 300 thousand US dollars.

The principle of KAZ is quite simple. The EL / M-2133 radar, developed by Elta, using four antennas with phased antenna arrays automatically scans the surrounding terrain, having no dead zones in azimuth. Radar signals are transmitted to a computer that is responsible for recognizing detected objects and issuing a command to destroy them. When an object is detected, the dimensions and speed of which correspond to anti-tank ammunition of one kind or another, the computer sends a command to the launcher. The latter shoots a protective ammunition, which forms a beam of cumulative attack nuclei on the way of the target. Collision with similar damaging factors leads to the destruction of flying ammunition. An explosion or mechanical destruction occurs at a distance of up to several meters from the protected tank, due to which it is not subject to noticeable risks. Declared the possibility of simultaneous work on several flying objects.

The project “Meil Ruach” also provides for notification of the crew about the detected attack. The computer of the active protection complex, controlling the shooting of protective ammunition, simultaneously provides the necessary information to the crew. Using it, tank crews can identify the launch site of anti-tank ammunition and cover it with return fire.

According to reports, the KAZ Trophy has some limitations that have a corresponding effect on its overall combat effectiveness. The performance characteristics of the control computer and the parameters of the other elements of the complex lead to the fact that it is capable of striking only relatively slow ammunition. The required efficiency is achieved by countering anti-tank grenade launchers or guided missiles. When the enemy uses high-speed sub-caliber projectiles, Meil ​​Ruach may not have time to respond to the threat. It should be noted that simultaneously with this complex another system was developed which had similar capabilities.

On the basis of the original Meil ​​Ruach complex, two new modifications were created, differing in bundling and some basic characteristics. Thus, in the basic version, the KAZ is equipped with four radar antennas and two launchers with automatic recharging. Such equipment is designed for installation on tanks. Armored vehicles with a combat mass of no more than 30 T are proposed to be equipped with a Trophy Light complex, which includes a lightweight launcher. The "light" version of KAZ weighs only 454 kg. Techniques weighing less than 8 t can carry the Trpohy LV system, weighing just 200 kg. An additional mass reduction was obtained at the price of using a reduced set of components and a lightweight launcher without the means of automatic recharging. 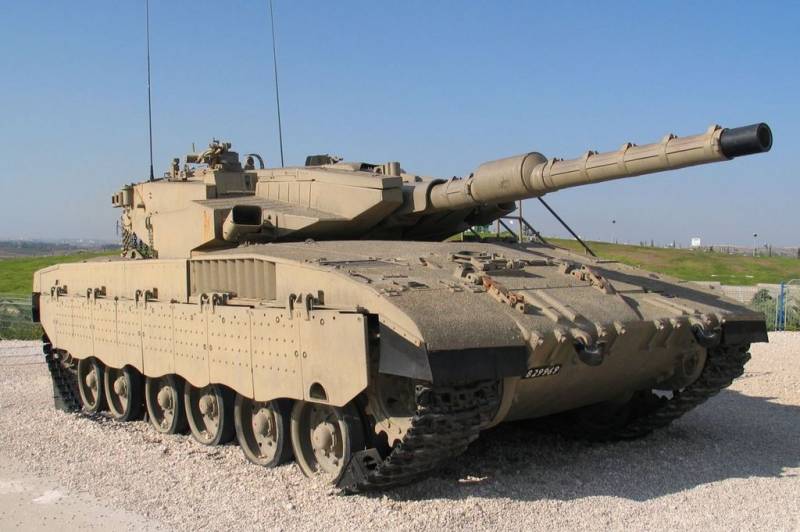 The main and only operator of the KAZ “Meil Ruah” is currently the Israel Defense Forces. The sole carrier of such systems is still the main battle tank Merkava Mk 4M. In the foreseeable future, lists of operators and carriers may be updated. Thus, since last year, Raphael, with its project Trophy, participates in a competition of the US Department of Defense, according to the results of which it is planned to choose KAZ for installation on the M1A2 American tanks. In late February, it was reported that the system “Meil Ruach” was successfully introduced into the SEP v.3 retrofit complex and tested. The competition, which also involves three other designs, should be completed before the end of this year.

The Israeli army has a significant number of tanks equipped with active defense complexes. As a result, such equipment has already managed to take part in various military operations. Moreover, the Israeli military already have experience using the KAZ “Meil Ruah” in real combat conditions. Since the spring of 2011, at least two dozen facts of the use of active protection during shelling by the enemy have been recorded. According to various sources, at least, most of these interceptions were successful and did not allow an enemy missile / grenade to hit the protected tank.

It is known that in the face of real clashes, the “Meil Ruach” / Trophy complexes had to face a variety of various anti-tank systems, which are widely spread in the Middle East. According to various reports, the enemy tried to destroy tanks using RPG-7 and RPG-29 grenade launchers, and also used Metis, Konkurs, etc. missiles. In all known cases, anti-tank ammunition was destroyed on approach and did not have time to cause significant damage to the target.

The experience of the combat use of the Mk 4M main tanks Merkava with the Meil ​​Ruach active defense complexes showed the capabilities and prospects of such systems. According to the results of combat use, it was decided to equip such systems with various armored vehicles of other classes. Not so long ago, a new contract appeared, implying equipping the existing KAZ with the main Mk 3 tanks in service. As a result of the fulfillment of the recently appeared order, the entire fleet of equipment of the Merkava family in regular armored brigades will receive additional protection, which should have a positive effect on the overall capabilities and potential of the troops.