March 16 2017
56
Exhibition SHOT Show is mainly devoted to firearms arms. But besides the weapon at this exhibition the mass of options of additional devices, ammunition and additions to the weapon is presented. Quite a lot of manufacturers of knives also participate in the exhibition, demonstrating their new products. It is impossible to cover the entire volume of new products, but it’s realistic to get acquainted with the most interesting folding knives that appeared this year, especially since products are not weapons and, if desired, they can be purchased even in the post-Soviet space without any permits. 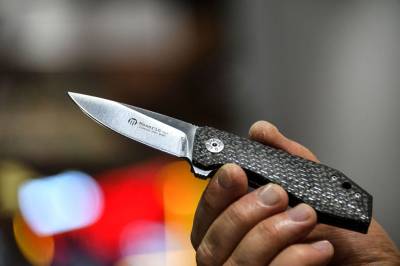 The company Coltellerie Maserin is well known on the European and American market for its products, which are of high quality and sophisticated design. The new 377 AM3 knife stands out primarily for its simple appearance, it has absolutely no decorations on it, a simple sharp blade and the same idle grip.

The blade of the knife is made of powder steel Bolher M390. For many, the word "powder" immediately defines the blade to the category of Chinese knives, which are sold for a dollar per kilogram, but powder metallurgy has leaped forward and now powder steel has very good characteristics. The blade does not rust, long holds sharpening.

The simple mechanism of the knife has a stainless steel bearing, which allows you to not worry about how the knife will behave after use in a wet environment or when moisture gets inside the handle. This of course does not mean that the knife will not need to care for, but nonetheless.

The handle of the knife can be made of carbon fiber or titanium carbide with a different texture and color coating. On the handle can be installed removable clip.

The only thing that confuses this knife is its price. The manufacturer recommends selling similar at a price of 199 US dollars. 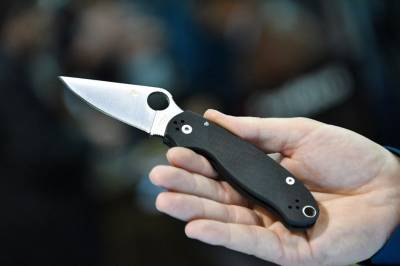 At exactly the same price offered another knife, but from the American company. This folding knife has an unusual shape of a blade with a hole. This form is necessary in order to have the opportunity to open the knife with one hand, with the thumb of the hand holding the thumb in the hole in the blade.

The blade of the knife is made back from powder steel, this time from CPM S30V. The metal perfectly keeps grinding and is not subject to corrosion.

The length of the blade is 75 millimeters. In the closed position, the knife has a length of 109 millimeters, in the open 184. Blade thickness 4 millimeter. Weight - 96 grams.

The handle is made of carbon fiber with a metal clip. 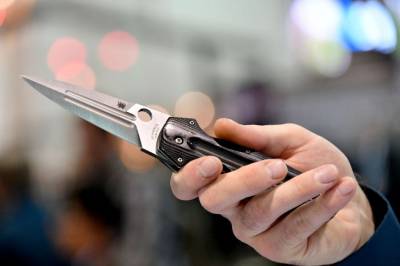 The next knife from Spyderco doesn’t look very unusual for a folding knife. It's all about the blade of the weapon, which is shaped like a two-edged, in fact, only one side is sharpened. An additional effect is created by the valleys on the blade, which are absolutely not needed by such a knife, but they look beautiful.

The blade of the knife is made of steel CPM S30V, as in the previous knife. The handle is made of stainless steel with carbon fiber overlays.

The length of the blade is 99 millimeters, thickness 3,8 millimeter. Length in the unfolded position - 228 millimeters, in the folded - 129. The weight of the knife is 170 grams.

The recommended price from the manufacturer is equal to 370 dollars. 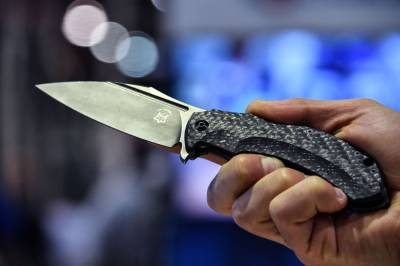 This knife is the result of the work of the French knife mater Bastienne Cova, who is quite famous among people interested in knives. This folding knife has simple appearance, but at the same time is rather convenient for daily tasks.
The blade of the knife is made of stainless steel N690Co with a hardness of 56 / 58 HRc. In addition to the anti-corrosion properties of steel, the blade additionally has a PVD coating. The handle of the knife is made of titanium, carbon fiber lining.

The length of the blade of the knife is equal to 107 millimeters, when unfolded, the knife has a length of 218 millimeters. Blade thickness 4 millimeter. Knife weight - 140 grams.

Even the approximate cost of the knife is not yet known, but something suggests that it will be around 400-500 US dollars. 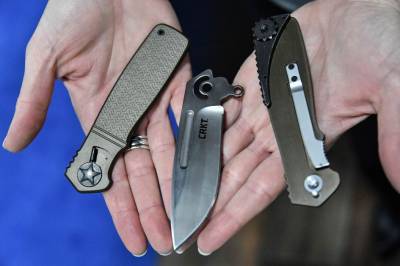 Among the various folding knives, which are mainly distinguished by the shape of the blade and the handle, a really interesting knife was presented at the SHOT Show 2017 exhibition. The company CRKT paid attention to such a problem as the complex cleaning of a folding knife in case of its pollution.

Most often, at least a screwdriver is required to disassemble a knife, the company's designers managed to make a knife that does not require any tools for its maintenance except tools for sharpening and rags.

The two halves of the knife handle, between which the blade is installed, are connected by a latch and double-sided screws with a roller in the center. Thus, for disassembly, you just need to move the latch and unscrew the screw. The solution is very simple, but it greatly simplifies the cleaning of the knife.

The blade itself is leather made of steel AUS 8, the handle is made of aluminum alloy. Blade length 90 millimeters, thickness - 3,3 millimeter. In the unfolded position, the knife has a length of 211 millimeters. 136 knife weight grams.

The knife is already on sale at a price of 150 dollars. 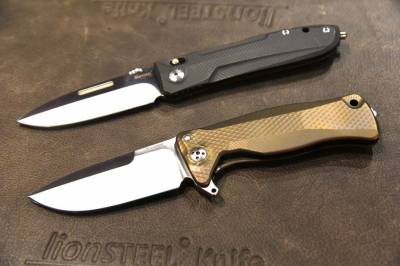 The most beautiful of all the above knives, in the author's opinion, are two knives from the company LionSteel.

Approximate price is about 220 euro.

The second knife has the designation SR11. The steel from which the blade is made is called Sleipner Uddeholm, it is a chromium-molybdenum alloy with a high silicon content. The handle is made of either a titanium alloy or aluminum. The blade length of the knife is 94 millimeters, the total length of 211 millimeters. Blade thickness 4,5 millimeter. For the version of the knife with an aluminum handle, the weight is 146 grams. This knife is available at a price of 196 euro. The knife with a titanium handle has a weight of 187 grams, its price starts from euro 330.

Ctrl Enter
Noticed a mistake Highlight text and press. Ctrl + Enter
We are
The action “Military service under the contract is your choice!” In Rostov-on-Don: future contract servicemen, exhibitions and “Russian Knights”Combat Knives (Foreign Combat Knives) Part of 2
56 comments
Information
Dear reader, to leave comments on the publication, you must to register.