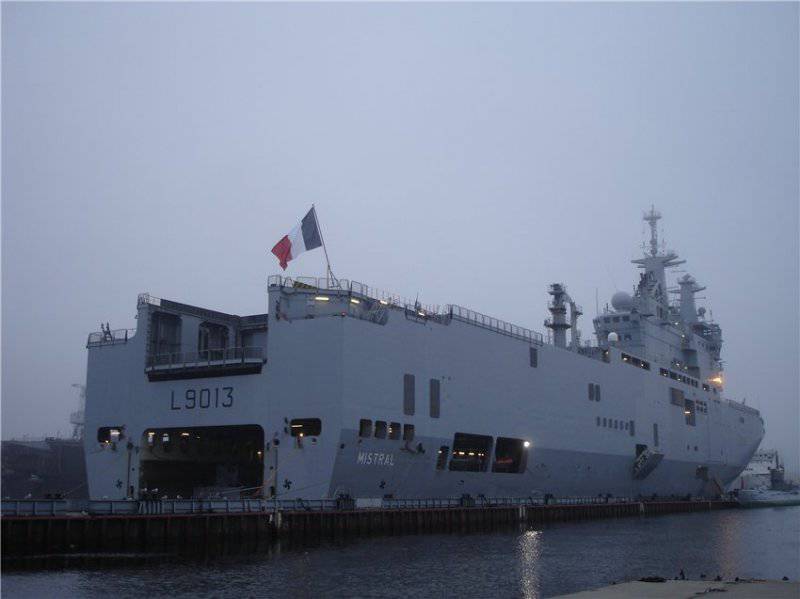 When reading articles about the State Defense Order, every time I am convinced that the Russian media work in the genre "News in the future tense ”, telling about events and plans that are most likely never to come true, but today they have become news and imposed on society as a subject for discussion. And now, among these information phantoms, on February 1 there was information about a real event - the laying of the Vladivostok universal landing helicopter landing ship in France. On this day, at the shipyard in Saint-Nazaire, metal cutting began for the first Russian UDK of the Mistral type.

"Mistral" only looks similar to the traditional ships, docks, helicopter carriers or amphibious assault ships. In fact, they have much greater potential. It was not by chance that the French isolated them into a separate class - "force projection and command vessel" (a strike-staff ship or, literally, "a force-control and control projection ship"). The distinctive features of such structures are the flight deck and the aft docking chamber located along the entire length of the hull. Also at Mistral, there is a command center at 150 operators and, equipped with the most modern equipment, a hospital at 70 places. The concept of such ships is not new - even during the Vietnam War, the US Navy was faced with the problem of controlling the diverse ship landing groups involved in the landing. Then the idea was born to combine them in one universal package.

Compared to its contemporaries, the American LPD of the San Antonio type, the Mistral looks more attractive: the French ship is operated by a crew of just 160 people, while the American landing craft docks require a 350 crew man. The future Russian ship also has an advantage in terms of the composition of the air group: 16 helicopters against 4 helicopters and 2 converters from the “Americans”. Summarizing all the above, we can give an unequivocal answer: UDC of the Mistral type is a modern landing craft, one of the best representatives of its class in the world.

About the fact that "Mistral" does not fit into the concept of combat use of the Russian Navy, about its inconsistency with the conditions in which the Russian Navy operates, its vulnerability and difficulties with service, many articles, publications and scientific works have already been written. Indeed, does the Russian Navy need a similar ship? For example, it is widely known that this, similar to the ferry, structure was created according to the standards of civil shipbuilding and is not able to withstand a hydrodynamic impact with a close underwater explosion. As far as I know, such a calculation is required when designing ships for the Russian Navy. It is difficult to say how this myth corresponds to reality, but it leaves behind an unpleasant aftertaste.

I will no longer bore the reader with a list of unverified (or, conversely, overly well-known) figures, facts and rumors. I, as an amateur, are interested in more obvious points:

The visit of Mistral in November 2009 to St. Petersburg was not without embarrassment. Domestic rotorcraft Ka-52 and Ka-27 without any problems boarded its deck (of course! The length of the Mistral flight deck was 199 meters, the width was 32 meters), but as it turned out, Russian helicopters did not fit into the opening elevator, so they could not be lowered into the hangar. Scandalous история did not receive wide publicity, but did not escape from public attention.

Further - even more fun. In connection with the basing on the Mistral of Russian helicopters with a coaxial propeller scheme, it will be necessary to increase the height of the underdeck hangar by at least a meter in comparison with the original design, which, naturally, will entail an increase in the ship’s "board". Excessive sail has always been one of the flaws of the Mistral, and the "Russian series" it will increase even more. Also, this will inevitably entail a decrease in metacentric height. What does it threaten at full load and in storm conditions? That's right, tipping over.

As already noted, helicopter lifts that lift equipment from the hangar to the flight deck are unsuitable for transporting the Ka-29 with suspended weaponry. It is necessary either to purchase Eurocopter helicopters from France, or to radically rebuild the lifting mechanisms.

This problem does not end with the aircraft. Fuel for refueling helicopters is supplied from two tanks, which are located below the waterline in the stern of the ship - fuel lines stretch from afar through 3 decks filled with people, ammunition and equipment. Very dubious decision of the French, affecting the survival of the UDC in the most negative way. You may have to change the entire system of refueling and storage of fuel according to domestic requirements. 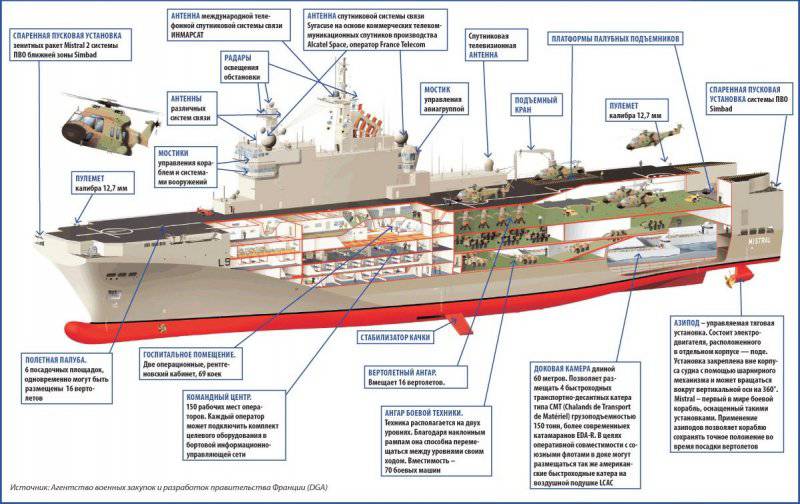 The transport deck for armored vehicles does not meet Russian requirements. It is designed for a mass not exceeding 32 tons for each combat unit. In turn, this means that on the transport deck of the Mistral there will be no Russian main combat tanks. In total, the ship will fit no more than five MBTs: three on the site in front of the docking chamber and two on the landing boats of 11770 "Serna" landing craft.

Further, Russian sailors will not be able to effectively use the space of the dock camera. "Mistral" - the French ship and its dock chamber was designed in accordance with the parameters of NATO assault vehicles. Therefore, despite the solid dimensions of the dock camera (57,5m x 15,4m x 8,2m, area 885m.kv.), Only 2 landing craft Ave 11770 are placed in it. And air-cushion landing craft of the 1206 Kalmar Ave. and 12061 Aurel Murena will not be able to be based on the Mistral at all - the DKVP do not pass through the gate of the dock camera in height! It turns out that you have to create under the "Mistral" new airborne landing craft.

French engineers have prepared a great surprise for Russian sailors. North Seamen are especially "delighted", as well as all those who try to exploit the Mistral in the northern part of the Pacific Ocean. The fact is that the boards of the French UDC have wide openings that provide natural ventilation on the helicopter and transport decks. A great idea for the tropics turns into a nightmare for the northern latitudes - icing of the whole technique is guaranteed. So you can not just wall up these openings, you first need to design an extensive system of forced ventilation.

Continuing the "ice theme", I will say that the Mistral hull does not have ice reinforcement, and this, given the conditions in which the Russian Navy operates, practically excludes the basing of French ships in the Baltic, the Pacific, and especially in the North. Especially a lot of problems with the nasal bulb, which is designed to improve ride quality. Those. a simple thickening of the board will not succeed. According to experts, this means developing a new project ship.

A separate conversation is worth Mistral propulsion system using submerged main electric motors. Screw-steering column type "Azipod" provide ease of maneuvering, but this system has serious drawbacks:
- first of all, it is a low speed of travel (18 nodes compared to 22 – 24 nodes at the UDC of the San Antonio type of the US Navy);
- operation of ships with “Azipods” requires regular docking for inspecting the steering wheels. And there is an opinion that there are no docks for such large ships in Russia, especially in the Pacific Ocean. I can assume that the "Russian Mistral" will get the traditional propulsion and steering wheels.

Not armed and not dangerous

Yes, the Mistral is almost completely absent defensive weapons. Machine guns and two twin Mistral MANPADS (this is not a typo, obviously the French really like this name), which are analogues of the Russian Needle or the American Stinger, can hardly be taken seriously.

On the one hand, it cannot please me as an adept of the deck aviation. The purchase of a Mistral UDC means a change in the shipbuilding paradigm of the Russian Navy. Simply put, the Navy adopts the concept of carrier fleet Western style. Use of the Mistral in landing operations is possible only with a powerful air cover, otherwise the entire landing will turn into a bloody mess. The naval version of the attack helicopter Ka-52 is effective only against ground forces. Neither in range nor in combat capabilities, he will not be able to replace carrier-based fighter-bombers. Accordingly, for this entire strike force, guard and supply ships are needed. It turns out that Russia plans to create a powerful and balanced ocean fleet.

If this is not the case, then the purchase of "Mistral" is like an adventure. Or the naval command does not intend to use French ships in amphibious operations, i.e. for their intended purpose.

Money down the drain?

Mistral is the French name for the cold wind blowing in the Rhone Valley. Won't a UDC with such a name be a waste of money “into the wind” in the direct and figurative sense? According to one radical Internet user, the Russian admirals bought themselves two foreign cars, each worth a billion dollars worth 2.

It seems strange: for the Russian fleet, in general, useless ships were acquired, which have no place in the modern concept of the Russian Navy, without escort ships and, most importantly, without the presence of numerous marines and means of landing it.

Maybe I was exaggerating in vain. With the purchase of Mistral, the domestic shipbuilding industry will gain access to the latest global technologies. Perhaps this is true, but then it is not clear why it took as much as 4 of a ship of this type.

In principle, the conversation is not that it is bad to acquire foreign military equipment. It's not so bad that we are trying to borrow the best solutions and designs. The point is that these billions could be spent more efficiently by purchasing, instead of UDC, other samples of European ships that the fleet really needs. As an option - the Spanish frigates of the type "Alvaro de Bazan". Even without the Aegis system (the sale of which is out of the question), they are a powerful and modern marine complex weapons. Most likely, the size has been played here - the Mistral looks much more solid than the frigate with a displacement of 6000 tons.

In my personal opinion, the Russian Navy is now in such a condition that any warship is valuable to it. It is better to let the sailors get the “Mistral”, than these funds will go offshore. 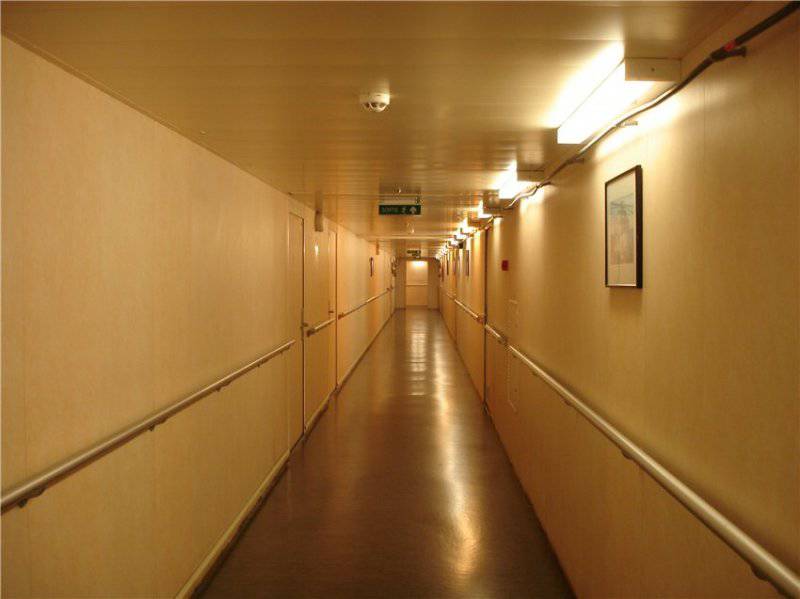 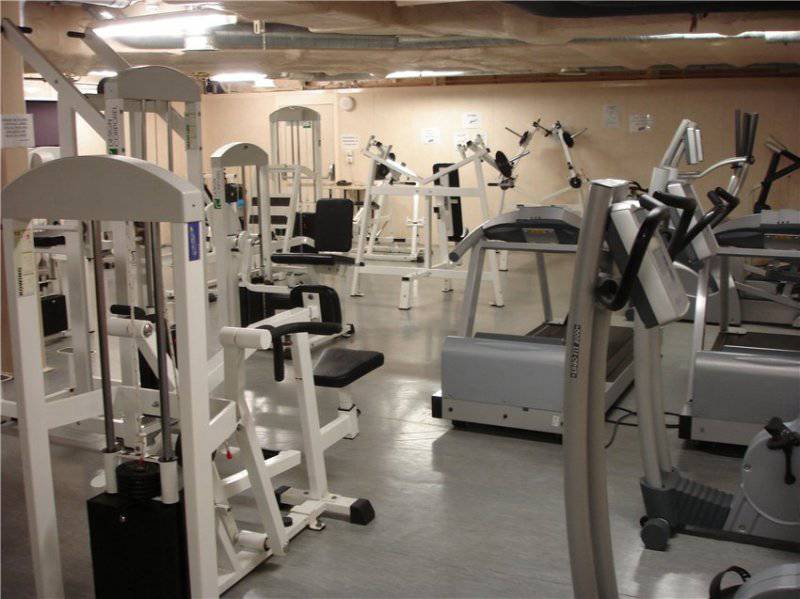 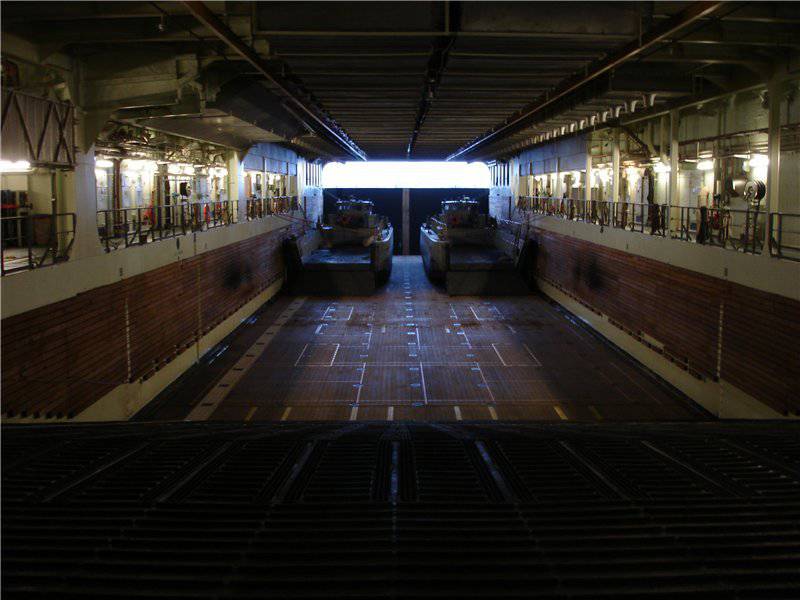 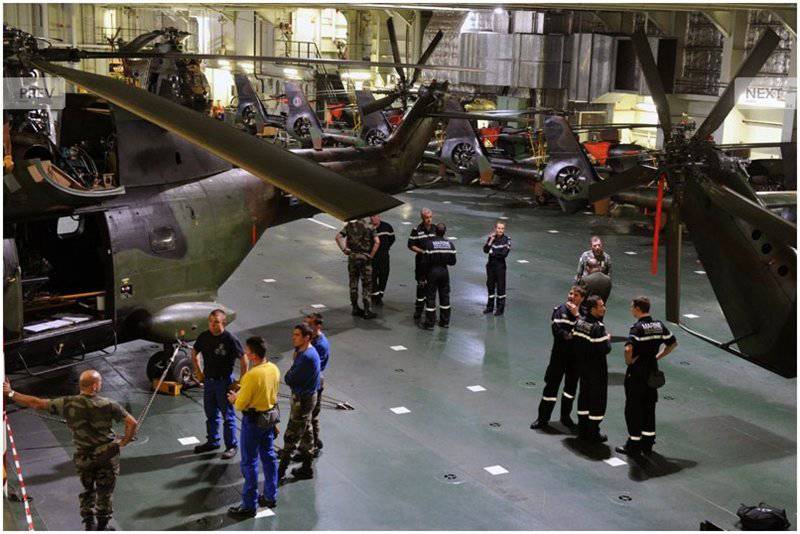 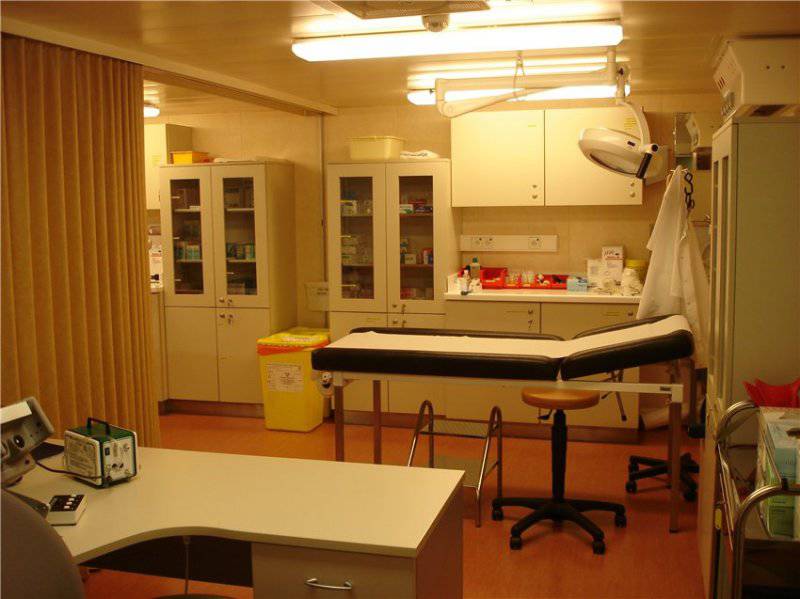 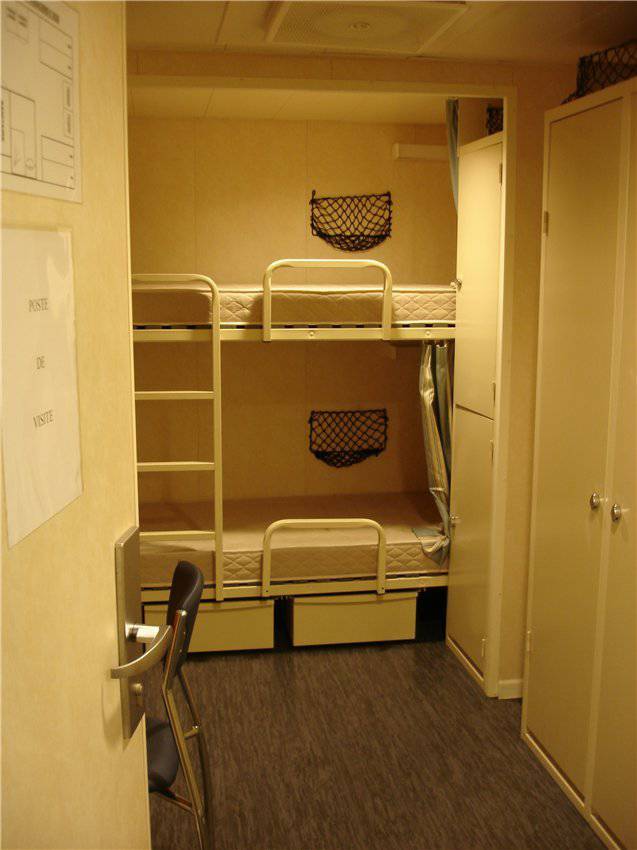 Luxury cabin for Madame and Monsieur 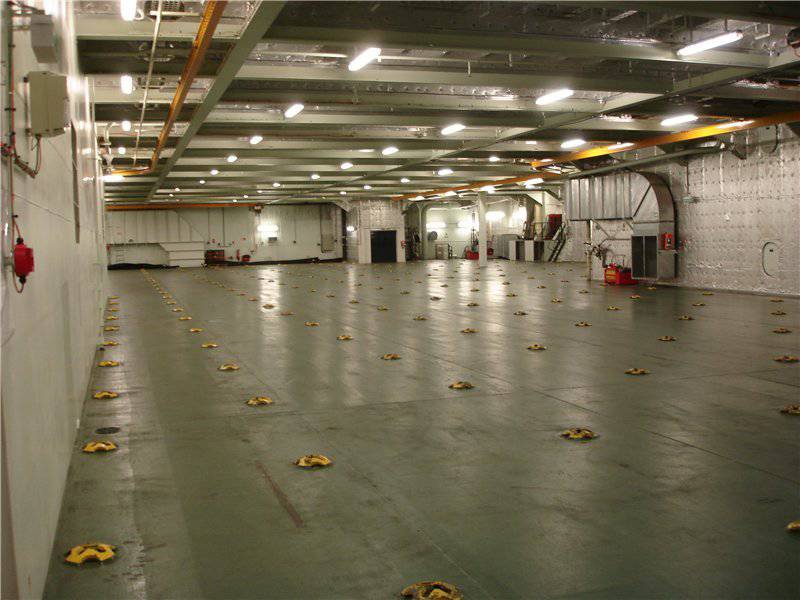