10 Soviet space achievements, which are deleted by the West from history 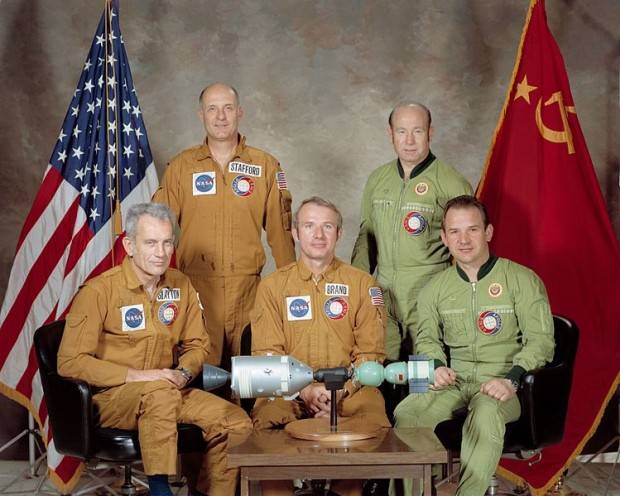 It is well known that the Soviet Union was the first to launch into space a satellite, a living creature and man. During the space race, the USSR as far as possible sought to overtake and overtake America. There were victories, there were defeats, but the younger generation, which grew up after the collapse of the USSR, already knows little about it, because space success, according to the Internet, is a lot of "strong, similar to superheroes, American astronauts." But do not forget that the Soviet cosmonautics made ...

10. The first flight around the moon

Launched on 2 on January 1959, the satellite Luna-1 was the first spacecraft to successfully reach the moon. The 360-kilogram spacecraft, which bore the Soviet coat of arms, was supposed to reach the surface of the moon and demonstrate the superiority of Soviet science. However, the satellite missed, having passed in 6000 kilometers from the lunar surface. The probe released a cloud of sodium vapor, which for some time glowed so brightly that it allowed tracking the movement of the satellite.

"Luna-1" was at least the fifth attempt by the Soviet Union to land on the moon, secret information about previous unsuccessful attempts are stored in folders "Top Secret".

Compared with modern space probes, the Luna-1 was extremely primitive. He did not have his own engine, and power supply was limited to the use of primitive batteries. The probe also had no cameras. Signals from the probe stopped coming three days after launch.

9. The first flyby of another planet

Launched on February 12 on the 1961, the Soviet space probe Venus-1 was to make a hard landing on Venus. This was the second attempt by the USSR to launch a probe to Venus. The descent capsule "Venus-1" was also supposed to deliver the Soviet coat of arms on the planet. Although most of the probe, as expected, was supposed to burn when it entered the atmosphere, the Soviet Union hoped that the lowered capsule would reach the surface, which would automatically make the USSR the first country to reach the surface of another planet.

The launch and the first communication sessions with the probe were successful, the first three sessions indicated the normal operation of the probe, but the fourth took place five days late and showed a malfunction in one of the systems. In the end, contact was lost when the probe was at a distance of about 2 millions of kilometers from Earth. The spacecraft drifted in space at a distance of 100000 kilometers from Venus and was unable to obtain data for course correction.

8. The first spacecraft, photographed the reverse side of the moon

Launched on October 4 1959, the satellite Luna-3 was the third spacecraft successfully launched to the Moon. Unlike the two previous probes, the Luna-3 was equipped with a camera for photographing. The task that was set before the scientists was to use a probe to take a photograph of the far side of the moon, which at that time had not yet been photographed.

The camera was primitive and complex. The spacecraft could only take 40 photographs that were to be taken, developed, and dried on a spacecraft. Then the onboard cathode-ray tube was to scan the developed images and transmit the data to Earth. The radio transmitter was so weak that the first attempts to transmit images failed. When the probe, having made a revolution around the moon, approached the Earth, 17 photographs of not very high quality were obtained.

However, scientists were excited about what they found in the image. Unlike the visible side of the moon, which was flat, on the back side were mountains and unknown dark areas.

7. The first successful landing on another planet

17 August 1970 was launched spacecraft "Venus-7", one of two Soviet twin spaceships. After a soft landing on the surface of Venus, the probe had to deploy the transmitter to transmit data to Earth, setting a record as the first successful landing on another planet and to survive in the atmosphere of Venus, the descent vehicle cooled to -8 degrees Celsius. Soviet scientists also wanted the descent module to remain at rest as long as possible. Therefore, it was decided that the capsule at the time of entry into the atmosphere of Venus will be docked with the carrier until the resistance of the atmosphere causes them to separate.

"Venus-7" entered the atmosphere as planned, but 29 minutes before touching the surface of the brake parachute could not stand it and broke. Initially it was considered that the descent vehicle could not withstand the impact, but later analysis of the recorded signals showed that the probe transmitted temperature readings from the surface of the planet within 23 minutes after landing, as the engineers who designed the spacecraft expected.

6. The first artificial object on the surface of Mars

Mars-2 and Mars-3, twin spaceships, were launched one day apart in May 1971. Revolving in orbit around Mars, they had to map its surface. In addition, it was planned to launch launch vehicles from these space ships. Soviet scientists hoped that these landing capsules would become the first man-made objects on the surface of Mars.

However, the Americans were ahead of the USSR, the first to reach the orbit of Mars. Mariner 9, which also launched in May 1971, reached Mars two weeks earlier and became the first spacecraft in Mars orbit. Upon arrival, both American and Soviet probes found that Mars was covered with a common dust curtain, which prevented data collection.

Although the descent vehicle Mars-2 crashed, the descent vehicle Mars-3 successfully landed and began transmitting data. But after 20 seconds the transmission stopped, only photos with little visible details and low light were transmitted. Probably, the failure occurred due to a major sandstorm on Mars, which did not allow the Soviet apparatus to take the first clear pictures of the Martian surface.

NASA had stones from the lunar surface, delivered by astronauts from Apollo. The Soviet Union, having failed to first land people on the moon, was determined to overtake the Americans with the help of an automated space probe to collect lunar soil and deliver it to Earth. The first Soviet probe "Luna-15" crashed while landing. The following five attempts failed near the Earth due to problems with the launch vehicle. However, the sixth Soviet probe Luna-16 was successfully launched.

Having landed near the Sea of ​​Plenty, the Soviet station took samples of lunar soil and placed them in a returnable vehicle, which started and returned with samples to Earth. When the sealed container was opened, the Soviet scientists received only 101 grams of lunar soil, against kilogram 22, delivered to Apollo-11. Soviet samples were carefully examined, it was found that the structure of the soil is close to wet sand in its qualities, but this was the first successful return of the automatic descent vehicle.

4. The first spacecraft for three people

Launched on October 12 1964, the Voskhod-1 was the first spacecraft to be able to deliver more than one person to space. Although Voskhod was announced by the Soviet Union as a new spacecraft, in fact, it was a modernized version of the same apparatus that Yuri Gagarin delivered to space. However, for the Americans, who did not even have two-person crews at the time, this sounded impressive.

Soviet designers considered Voskhod unsafe. They continued to object to its use until the government bribed them with a proposal to send one of the constructors as an astronaut into orbit. However, in terms of safety, the design of the spacecraft had a number of serious complaints.

First of all, it was impossible to emergency astronauts with an unsuccessful launch, since it was not possible to construct a hatch for each astronaut.

Secondly, the astronauts in the capsule were so crowded that they could not wear space suits. As a result, in the event of depressurization, they would have died.

Third, the new landing system, consisting of two parachutes and a brake motor, was tested only once before the flight.

Finally, the astronauts had to follow a diet before the flight, so that the total weight of the astronauts and the capsule was small enough to launch the rocket.

Taking into account all these serious difficulties, it was just amazing that the flight went flawlessly.

3. The first person of African descent in space

18 September 1980 of the year “Soyuz-38” flew to the orbital space station Salyut-6. On board were the Soviet cosmonaut and the Cuban pilot Arnaldo Tamayo Mendez, who became the first man of African descent who went into space. His flight was part of the Soviet program Intercosmos, which allowed other countries to participate in Soviet space flights.

Mendez remained on board the Salyut-6 only for a week, but he conducted more 24 experiments in chemistry and biology. We studied its metabolism, the structure of the electrical activity of the brain, and the change in the shape of the bones of the legs under weightless conditions. Upon returning to Earth, Mendes was awarded the title "Hero of the Soviet Union" - the highest award of the USSR.

Since Mendez was not an American, America did not consider this an achievement, so for the USA, the first African-American in space in 1983 was Guyon Stewart Blueford, a member of the Challenger shuttle crew.

11 February 1985 was silenced by the Soviet space station Salyut-7. There was a cascade of short circuits at the station, which turned off all its electrical systems and plunged the Salyut-7 into a dead frozen state.

In an attempt to save the Salyut-7 of the USSR, they sent two cosmonaut veterans to repair the station. The automated docking system did not work, so the astronauts had to come close enough to try to do the docking in manual mode. Fortunately, the station was stationary and the cosmonauts were able to dock, for the first time demonstrating that it was possible to dock with any object in space, even if it was dead and out of control.

The crew reported that inside the station is covered with mold, the walls were overgrown with icicles, and the temperature was -10 degrees Celsius. The space station restoration work took several days, the crew had to check hundreds of cables to determine the source of a fault in the electrical circuit, but they succeeded.

1. The first human victims in space

30 June 1971, the Soviet Union looked forward to the return of the world's three first astronauts who spent more than 23 days in orbit. But when the capsule landed, there was no signal from the crew inside. Opening the hatch, the ground servicemen found three dead astronauts with blue dark spots on their faces and blood from the nose and ears. What happened?

According to the investigation, the tragedy occurred immediately after the separation of the descent vehicle from the orbital module. The valve in the descent vehicle remained open and in less than two minutes all the air escaped from the capsule. When the pressure dropped, astronauts quickly suffocated, unable to find and close the valve before they lost consciousness and died.

There were other deaths, but they occurred during launch and passing through the atmosphere. The accident of the Soyuz-11 spacecraft occurred at an altitude of 168 kilometers, when the astronauts were still in space, making them the first, and so far the only, dead in space.

So remember history. She knows both victories and failures, and do not let anyone doubt that you live in a great country.

Ctrl Enter
Noticed a mistake Highlight text and press. Ctrl + Enter
We are
Soviet program "probe" and the first commercial flyby of the moonCosmonautics has a limitless future, and its prospects are endless, like the Universe itself (S. P. Korolev)
96 comments
Information
Dear reader, to leave comments on the publication, you must to register.