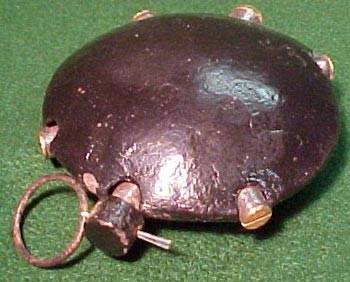 The First World War became a kind of catalyst for the development of the military industry, many inventions of that time could fundamentally change the course of military operations. Changed tactics of combat, created a new weapon, personal protective equipment. Many of the inventions of that time can now be puzzling, since they are not as high-tech as the weapons to which we are accustomed, but once they were truly revolutionary.


Considering the models of weapons of the First World War, it is interesting to observe the course of thought of the designers of that time, who managed without high-precision equipment and a sufficient knowledge base to solve their tasks. Of course, some decisions were primitive, and the result was not always equal to expectations, but it was. So the German designers managed to create an unusual Diskushandgranate hand grenade, which, although it had a lot of flaws, was a vivid example of a simple and original solution to a complex task.

Even while the first manually-thrown explosive devices appeared, their main problem was revealed - a separate brave opponent, instead of trying to hide, could pick up a missile projectile that had not yet exploded and throw it back. In addition, the enemy had time at least to lie on the ground before the explosion. 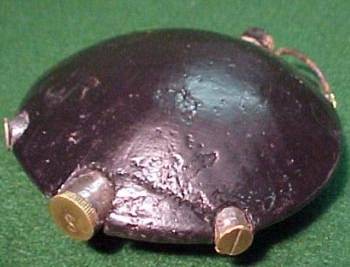 To solve this problem, it was possible to reduce the response time of the moderator, but this significantly increased the risk of the use of such grenades by soldiers. Experienced fighters could throw a grenade a second or two after launching a moderator, but in the hands of a recruit such a trick could be fatal not only for him, but also for his comrades. Although it is necessary to recognize that such a technique of throwing grenades is very effective with proper skill, especially when a grenade explodes not on the ground, but in the air, on approaching the target, which increases the radius of destruction by shrapnel.

Technically, at that time, it was possible to create a fuse with adjustable response time, but only the cost of even the simplest, but reliable circuit was too high for one-time use. The only correct solution to the problem was to create a hand grenade with an instantaneous fuse that would work from hitting the ground.

The solution to this problem was taken by the German company Dynamit AG. Even before the start of World War I, the company created the first version of a similar grenade, which had an explosive charge of only twenty grams, when the mass of the grenade itself was equal to 360 grams. 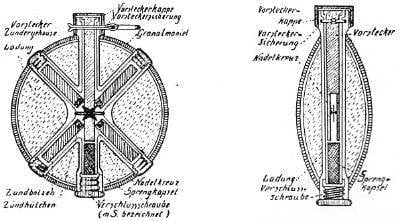 This option Diskushandgranate should not be considered as a combat, since its effectiveness was extremely low. Rather, it was an experimental model, which honed the work of the fuse.

A truly effective means of defeating the enemy was a sample of the 1915 grenade of the year, in which an explosive charge was increased, incisions appeared to facilitate the formation of fragments during rupture, and the grain itself grew in size.
Separately, it is necessary to mention such a fact as the possibility of throwing grenade data from various primitive devices such as slingshot or big slingshot, which significantly increased the throwing range, and also made it possible to throw several explosive devices at once into the ranks of the enemy.

The appearance of the Diskushandgranate grenade can easily be confusing, the only thing that gives out the purpose of this device is a familiar security check. The body of the "lentil grenade" consisted of two cast-iron parts, which were fastened together with rivets. On the inside of each of the halves there were grooves that served to facilitate the formation of fragments during the explosion. It is thanks to the appearance of this grenade and dubbed "lentil."

The grenade has 6 protruding elements. 4 plugged incendiary tubes, 1 tube with an explosion-initiating compound and one fuse tube. All these elements are located in the star-shaped body of the fuse. In the center of the fuse there is a metal detail in the shape of a star with four rays opposite the tubes with incendiary composition. 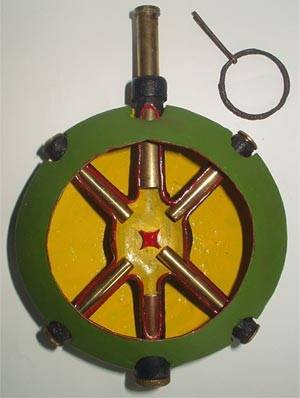 The fuse is made in the form of a tube with a slot and in its normal position closes the central metal part.

It all had to work as follows. After removing the protective tube from the grenade body, the soldier threw it towards the enemy. Due to its shape, the grenade almost always fell on an edge, which pushed one of the incendiary tubes, and it worked from contact with the sharp beam of the central part of the fuse. This triggered the initiating compound, which, in turn, led to the detonation of the main explosive charge.

The garnet 1915 of the year had a mass of 415 grams, its diameter along the edge was equal to 100 millimeters, the weight of the explosive was 130 grams.

The pros and cons of the Diskushandgranate hand grenade

The main advantage of this hand grenade is the simplicity of its design, which allowed for the shortest time and cost to deploy its production. It should be noted and the possibility of launching several explosive devices from primitive throwing means. 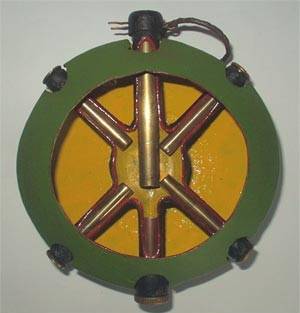 The disadvantages of the lentil grenade had much more. The main disadvantage of Diskushandgranate is its form. With this form it is convenient to take up a throwing grenade is simply impossible, and if you add to everything and a smooth surface of the case, then you can not talk about usability at all.

The second negative quality of the "lentil grenade" is the same body back. It is precisely because of the hull that the fragmentation of fragments is minimal in the plane of the rib. That is, the effectiveness of a grenade hitting the ground in a position parallel to the horizon is minimal, since most of the fragments go down and up. This means that throwing a grenade is the only convenient way, like a sports disk, to reduce the effectiveness of its use.

The reliability of the operation of the Diskushandgranate fuse is also questionable. If the grenade falls into the snow, soft ground or water, then the expected explosion may not occur.

Despite all the shortcomings, it is difficult not to mention the simplicity of the solution of the task set by the designers. And if we evaluate the “lentil grenade” in terms of price-quality ratio, the engineers at Dynamit AG worked on a solid “four”. The "lentil grenade" did not last long, by the end of 1916, production was curtailed, and all stocks in the army were used.