Mi-8AMTSH-VA helicopter will be exported 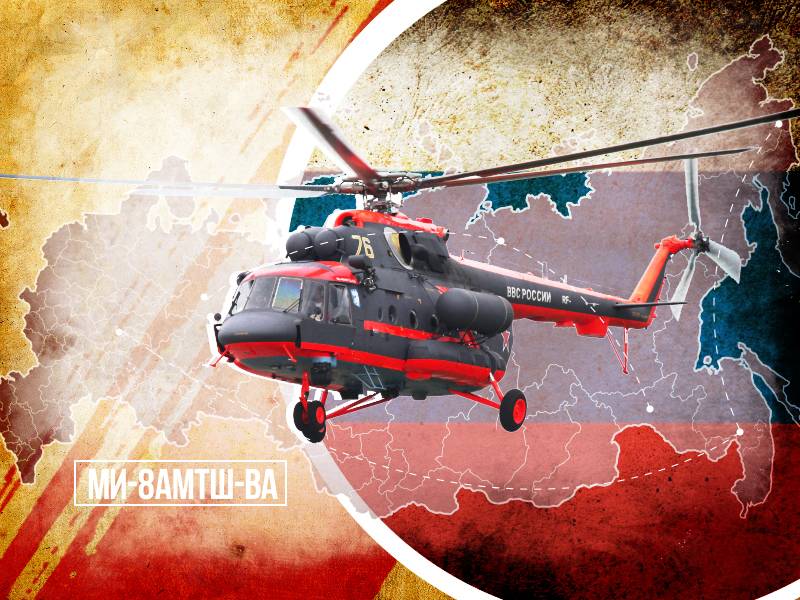 New plans of domestic became known aviation industries related to the production of new equipment for supply to foreign customers. Earlier, some information about possible export contracts for the supply of multi-purpose helicopters Mi-8AMTSh-VA in the Arctic version was announced. Now this topic has continued. Some interesting details have been published. The industry really has plans for the sale of such machines to foreign customers and has already decided on the timing of entry into the international market.

February 7 news agency RIA News with reference to the official representative of the holding company "Helicopters of Russia" reported on the possible offer of the latest "northern" helicopters to foreign customers. It is noted that some foreign countries have already shown interest in the Mi-8AMTSH-VA helicopters. Future export contracts may be concluded with China, Argentina and other countries.

The representative of the organization-manufacturer of equipment noted that at the moment new domestic helicopters have not yet become the subject of export contracts, but the reasons for this are not the lack of demand. Mi-8AMTSH-VA helicopters have recently entered service in Russia, and industry experts need some time to check the equipment in real conditions of the Arctic. When the car fully confirms all its capabilities and characteristics in any conditions, including the most difficult, the holding company "Helicopters of Russia" will be able to bring new development to the international market. The representative of the holding expressed confidence that the car will take a worthy place in the market. 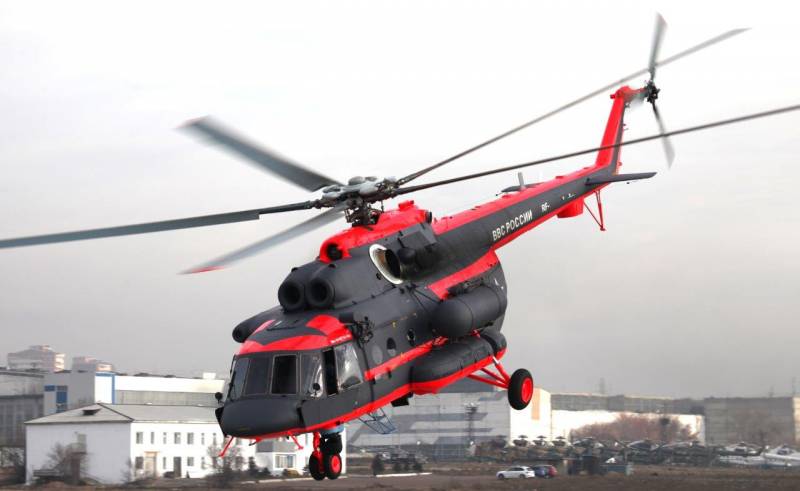 According to L. Belykh, now Mi-8AMTSH-VA helicopters are supplied to the Russian Ministry of Defense, and in addition, there are plans to build such equipment for other domestic state structures. Also now, the industry is engaged in various formal issues, the solution of which will allow to supply equipment for export. At the same time, the director of U-UAZ noted that there is a market for rotary-winged vehicles with similar capabilities and characteristics.

So far, the production of helicopters capable of working in the Arctic without any difficulties is conducted only in the interests of domestic customers. The only buyer at the moment is the military department. Several machines for the aerospace forces have already been built, tested and handed over to the customer. The second recipient of equipment was naval aviation of the naval fleet. Continuing the assembly of serial equipment, the Ulan-Ude Aviation Plant in several years will have to form a fairly large fleet of equipment, designed to ensure the work of troops in the Arctic.

In its original form, the Mi-8AMTSH-VA helicopter is a military transport vehicle with the possibility of carrying some weapons with a set of special equipment. In this form, the technique is intended for army structures. It was previously mentioned that on the basis of the technologies used in this project, a new version of the helicopter could be created, suitable for use by civil organizations. In this case, various structures, companies and organizations operating in the High North become potential customers of the “Arctic” helicopters. In this case, a specialized helicopter becomes a good replacement for the Mi-8 family of previous modifications.

According to earlier reports, a number of foreign countries have already shown interest in new Russian helicopters, but contracts for the supply of such equipment have not yet been signed. According to representatives of the aviation industry, the main reason for the lack of contracts is the desire to check the equipment during operation. Confirmation of opportunities in real conditions will allow new contracts to be signed with third countries. At the same time, an enterprise engaged in serial production of equipment is already ready for the emergence of such agreements.

The new domestic helicopter Mi-8AMTSH-VA is a deeply modernized version of the machine Mi-8AMTSH-V, which is distinguished by a number of characteristic features of the design and on-board equipment. Mi-8AMTSH-B, in turn, was created earlier as an improved modification of the serial Mi-8AMTSH, which has a different composition of the power plant. The full set of ideas and solutions used in the two projects made it possible to increase the flight performance of the equipment, as well as expand the range of acceptable operating conditions.

Being a new representative of the Mi-8 family, the helicopter for the Arctic retains the main structural elements and also builds on existing layout solutions. However, some measures related to the intended operation have been taken. The existing metal fuselage for work in the northern regions is supplemented with thermal insulation and a heating system. In addition, for the convenience of long-term work of the crew and passengers, the use of insulating curtains is provided. There is a set of tools for heating water and food both in the parking lot and in flight.

When working at a distance from the bases, the helicopter must be equipped with special heat-insulating covers. Such equipment allows you to protect the machine from adverse external influences, as well as save heat and speed up the process of warming up the equipment in preparation for departure. 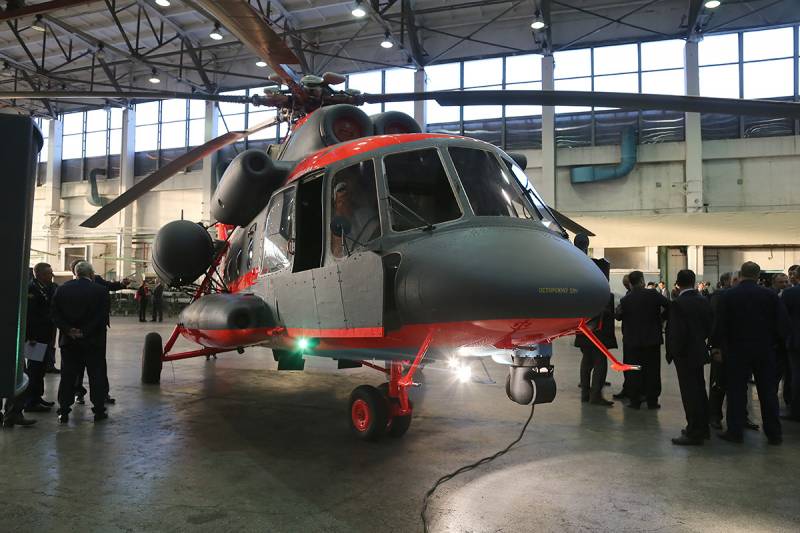 The helicopter of the new model is equipped with turboshaft engines VK-2500 with 2700 horsepower. on emergency mode. High engine performance allows you to fly in different modes. In this case, in case of failure of one of the engines, the helicopter may continue to fly. Declared the possibility of continuing horizontal flight or even climb when using one of the two engines. The efficiency of the power plant in difficult conditions is also ensured by means of gear preheating.

For quick engine start in all conditions, the helicopter carries an auxiliary power unit of the TA-14 type. The auxiliary power unit of the Mi-8AMTSH-VA helicopter, in contrast to the units of the previous machines of this class, is produced in Russia. T.N. The system of rapid engine start-up is characterized by high performance and, it is claimed, has no analogues. With its help, the main power plant can be started at temperatures up to -60 ° C.

Being a further development of the existing model of aviation technology, the new Mi-8AMTSH-VA retains a number of already used on-board equipment. So, for navigation it is proposed to use the digital system CNS-02, as well as devices for processing signals from navigation satellites. The communication equipment complex incorporates devices operating in the range from 2 to 400 MHz. Taking into account the peculiarities of the operation of aircraft in the Arctic, the complex of navigation equipment was supplemented with the SSCM-M system and inertial equipment of the BINS-SP-1 type. Also, the “Arctic” helicopter is equipped with the PKV-8 digital autopilot and RPA-500 equipment necessary to search for people in distress. The helicopter carries a weather radar to monitor the situation in the air.

For flights in the dark or during the polar night, the crews of Mi-8AMTSH-VA helicopters are encouraged to use domestic-developed night vision goggles. Equipment dashboards on the ground crew and cabin lighting adapted for use in dark conditions.

In case of emergency situations, the helicopter carries a set of various rescue equipment. So, when landing on the water, the crew and passengers can use life rafts and wetsuits. When using such equipment, people can stay afloat for a long time, and also give distress signals. If necessary, the “Arctic” helicopter can also participate in search and rescue operations by itself, performing a search for signals and providing assistance to victims on the spot.

Being a development of helicopters of the Mi-8AMTSH series, the machine for the Arctic in the basic military configuration has the ability to carry and use weapons. To support the landed fighters or to solve other combat tasks, the helicopter can carry up to four blocks with unguided C-8 missiles. Also, helicopters with the letter "W" have the ability to use several machine gun installations in different parts of the fuselage.

From 2015, the new multi-purpose helicopters, including the Mi-8AMTSH-VA, are equipped with the Vitebsk airborne defense complex. As part of this complex, there are four ultraviolet direction-finders for launching rockets, three stations for optical-electronic suppression, and two devices for ejecting false thermal targets. Working in automatic mode, the Vitebsk system monitors the launches of enemy anti-aircraft missiles, and then uses the required means of protection against them. The correct operation of the homing head of a rocket is broken by suppressing special configurations with light signals or by using its “distraction” with false targets. 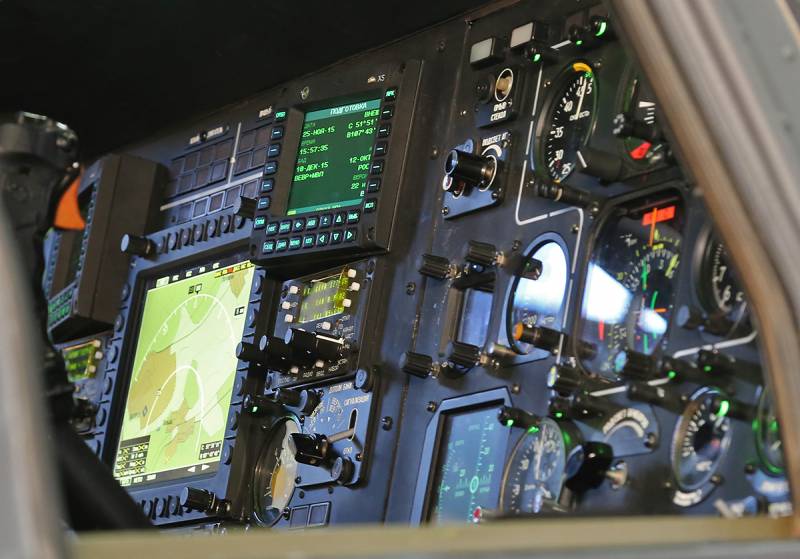 Improvements to the basic design related to the expansion of acceptable operating conditions were initially considered in the context of the use of equipment in the conditions of the Far North. The results can also be used in the operation of helicopters in the mountains. This feature of the project not only expands the range of tasks, but can also affect the number of potential customers.

At the beginning of 2015, the holding company “Helicopters of Russia” completed the development of the Mi-8AMTSH-VA project, after which the staff of the Ulan-Ude Aviation Plant began assembling the first car of the new model. The necessary checks of the helicopter continued until the end of autumn, after which the car was handed over to the customer. The production of such equipment continues to this day, thanks to which the military department has already managed to receive several serial helicopters. Most of the cars transmitted to the aerospace forces. Not so long ago, deliveries began in the interests of naval aviation.

Last year, the capabilities of U-UAZ in the construction of "Arctic configuration" helicopters were announced. Despite the small volumes of existing orders of the Ministry of Defense, as well as the lack of contracts with other buyers, the plant is able to build up to 20-30 helicopters per year. Such rates of equipment deliveries will make it possible to positively influence the development of the Arctic. At the same time, it was noted that there were no new orders for the Mi-8AMTSH-VA, and the volume of new contracts in the international market was decreasing.

Operation of the newest specialized military transport helicopter Mi-8AMTSH-VA in the military began at the end of the year before last. Since then, several new machines have been supplied to the customer, distributed between different connections. According to available data, the received equipment is actively used in the Far North to transport people and goods in difficult conditions, which do not allow full use of helicopters of previous models. In the future, the production of such helicopters in the interests of the armed forces of Russia should continue, which will accordingly affect their capabilities in the context of the development of the Arctic.

According to the latest data, in the foreseeable future, Mi-8AMTSH-VA helicopters can go abroad. In order to enter the international market, development organizations and manufacturers plan to complete testing of equipment during the current military operation. Confirming the characteristics and capabilities, the machine can be the subject of international contracts. A small list of potential buyers of such equipment has already been formed. Apparently, China, Argentina or some other countries can actually order Russian helicopters. In addition, this technique may be of interest to other customers. Nevertheless, it will be possible to talk about the list of customers and the number of helicopters to be bought only in the future, when the existing interest will be in the form of full-fledged contracts. As follows from the latest news, it’s not long to wait.