February 4 2017
11
In the second half of the twentieth century among the tasks solved by military means, the most important place was taken by the preservation of the lives of personnel. The studies included a wide range of approaches and technologies: body armor, contactless combat with long-range weapons, increased crew security, demining and defeat of the enemy using robotic means. What experience do our developers rely on, what problems arise on this way?


In the USSR, they thought about such military vehicles in the 20s, as it came to be understood that equipment would play a decisive role in the next world war. Even then, experimental work in the field of domestic tank telemechanics.

In 1927, at the Red Army Military Electrotechnical Academy (VETA), the Red Army developed television equipment for the Renault Russian light tank (this is the Russian version of the French Renault FT), and in the Central Wire Communication Laboratory (TsLPS) for MS-1 (T-18 ).

At the first stage, the remote-controlled tanks were tied to the stationary PAUT consoles (automatic tank control post), then the equipment reliability increased significantly, which allowed to transfer commands from a specially developed control machine (a tank with standard weapons, supplemented by the necessary equipment). This gave the operator the opportunity to move around the battlefield under the protection of armor.

In the 1933, the TT-18 tank was tested with control equipment located on the driver’s seat. He could carry out 16 commands: turn, change speed, stop, undermine explosive charge, and in the presence of special equipment - put a smoke screen or use poisonous substances. The range of TT-18 was several hundred meters. The TT-18 models converted at least seven full-time MC-1 tanks, but the system never entered service.

A new phase began in 1934. Under the code "Titan" a remote-controlled tank TT-26 was developed, equipped with a removable flamethrower and a radio station on two frequencies - KB and VHF, which could be switched to. Some of the lamps of the radio stations had metal flasks, but most of them were still glass. Paradoxically, there was no refusal. The whole structure was mounted on special shock absorber springs.

There were unexpected innovations. For example, in the event that a remote-controlled tank exits the operator’s reach, the device of the Stop command is automatically triggered. The car stopped and waited with the engine running the next signal. When attempting to capture an enemy, a remote-controlled tank, according to the regulations, was required to shoot from a cannon.

On the eve of the war, 56 units were manufactured, which entered service with two specially formed battalions that were part of the 30 and 36 armored brigades. In September, the 1939 th 152 battalion participated in the liberation campaign in Western Ukraine. One of the modifications, made on the basis of TT-27 wedge heels, was able to carry a TNT charge up to 500 kilograms with a fuse delay up to 15 minutes. TT-27 hauled the device to the enemy's objects and retreated to a safe distance. A charge of such power provided the destruction of any reinforced concrete fortifications. An experimental batch of TT-27, wire-controlled, was released, which was successfully used to break through the Mannerheim line. 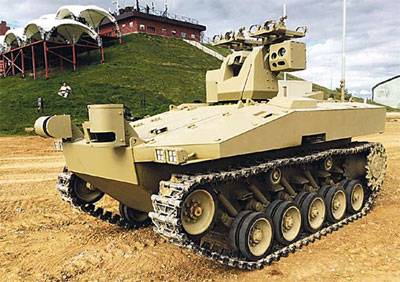 By the beginning of World War II in the USSR, signs of systematic use of military robotics appeared, special military units were formed. The last time combat remote-controlled tanks were used by the Red Army in 1942, near Sevastopol.

Germany followed a similar path. Radio-controlled mine trawls were created by designer and entrepreneur Carl Borgward, the founder of the Borgvard company. The machine Sd.Kfz.300 had two compartments - the front (engine-transmission) and rear, which housed the radio equipment. The power plant served as a 29-strong four-cylinder gasoline engine, providing movement of the trawl at a speed of five kilometers per hour. The control was carried out by an operator from a small commander tank. In front of him the mine sweeper pushed three carts with additional rollers that were supposed to cause detonation. By May, 1940 released 50 units Sd.Kfz.300 BI.

And in April of the same year, the Borgvard company created the B-II mine trawl. For the first time these machines were used by the Germans in 1943-m in the operation "Citadel" (Battle of Kursk). The new machine had increased size and was heavier than its predecessor, its weight was 2,3 tons. The engine became more powerful - the 49-strong six-cylinder.

The radio-controlled mine conveyor Sd.Kfz.301 was intended for delivery of charges with a set timer to the enemy’s bunkers and minefields for their subsequent detonation. Compared to the B-II, the layout of the car has changed. Ahead, a compartment for explosives appeared with a guide along which it was supposed to roll down to the ground. Behind it was located the office of management with the place of the driver and devices for manual control of the machine. It also housed a transmission consisting of a torque converter and a four-speed gearbox - two forward and two reverse. The aft compartment was considered motorized, where on the right side (closer to the center of the machine) was the radio control equipment: a receiver, a decoder and an explosion system block relay.

In the summer of the 1944, the Germans formed the 302 tank battalion of radio-controlled vehicles. He was sent to the Eastern Front at the disposal of the command of the Army Group Center, whose units participated in the suppression of the Warsaw Uprising (the conveyors broke barricades).

The most famous light carrier Sd.Kfz.302 Goliath charges, which is widely used to destroy enemy armored vehicles. This kamikaze robot was cheap to manufacture (especially after replacing an unreliable but quiet electric motor with a gasoline engine) and is efficient. With a weight of less than 400 kilograms, Goliath carried 75 – 100 kilograms of explosives, and the length of the cable made it possible to move up to 700 meters.

Kamikaze robots were created on the eve of World War II and in Japan. Based on the American three-ton tractor Fordson Crawler Tractor with the 20 engine horsepower, a robot was created, which provides for the delivery and production of mine charges. Management was carried out by radio.

The experience of using kamikaze robots also revealed shortcomings, the main ones of which were low speed and maneuverability, as well as high vulnerability of control systems over wires, limited operation of radio communication channels.

Modern technologies - the miniaturization of electronics, the development of navigation systems and communications - made it possible to make a breakthrough in the development of robots, including military applications (HV). In terms of value, experts equate this phenomenon with the adoption of aircraft and tanks in service at one time.

Special attention in the development of modern robotics is paid to the development and creation of autonomous intellectualized control systems for robotic complexes (RTC). RTK VN with such “brains” are able to solve assigned tasks with minimal participation of a human operator, which, under the conditions of using modern EW tools, becomes the decisive factor of efficiency.

From the entire spectrum of military robotics, unmanned aerial vehicles are distinguished. The use of UAVs, including kamikazes, has become commonplace in local military conflicts and during anti-terrorist operations. When a target is detected, the UAV dives at it, undermining the warhead injected into the hull. AeroVironment, for example, commissioned by the Pentagon to test the Switchblade platform weighing less than two kilograms, which can be launched in several ways, including a compact launch tube. She, along with the apparatus itself, is placed in the soldiers' backpack. Such a kamikaze UAV is capable of destroying small targets like a cruise missile.

Ground and marine robotics significantly lag behind in all areas of combat use. But in recent years, the activity of developers in our country and abroad has increased dramatically. The American company Foster-Miller has created the most popular (released more than three thousand copies) military robot TALON. It is designed to search and deactivate mines and land mines, reconnaissance and surveillance. It can perform the function of a communication station and relay, attack the enemy. Designed on the TALON platform, the SWORDS (Special Weapons Observation Remote reconnaissance Direct action System) combat robot carries a whole range of infantry and anti-tank weapons. However, the experience of using in Iraq cannot be called positive. RTK VN for no apparent reason out of control and began to move erratically. There have been cases when fire was opened without an operator command.

In the newly developed MAARS (Modular Advanced Armed Robotic System) robot, a ban on aiming towards its unit has been programmed. In addition, the operator can set the sector (restricted areas), which provides for the possibility of blocking the opening of fire. Work on the creation of such robots are conducted in other countries. In particular, the British company ECA has developed a Kster model kamikaze robot, which is designed to detect and undermine mines.

Among overseas ground-based RTK VN, the most widely distributed (by the number of samples) were small-sized remotely controlled machines (DUM) weighing up to 500 kilograms. Their main purpose is to explore and perform engineering tasks, but the role of machines with fire weapons on board is gradually becoming stronger. Currently in service with the US Army about 12 000 DUM samples. Typical considered multifunctional robotic complexes TaIon, Warrion, MAARS.

Analysis of the performance characteristics and development paths of ground military robots shows that in the Russian Federation and the United States there are certain differences in their type. In the United States, the focus is on RTK HV to 500 kilograms, focused on use in the city. In our Armed Forces, promising robots are assumed to be of medium and heavy classes for fighting in difficult terrain.

In the GOZ at 2016 – 2025, it is planned to create samples of all classes of ground-based robots of engineering and reconnaissance-impact type with a focus on medium and heavy complexes (Uran-9, Uran-14, Pass-1, etc.). Essentially heavy domestic RTK VN are full-fledged armored all-terrain vehicles with remote control and the corresponding armament. For example, the "Uranus" weighing eight tons in size is only half the size of modern tanks and reaches speeds of up to 15 kilometers per hour.

Not only the fire support machine, but also the self-propelled mine sweep were created at its base. At the same time, it is necessary to pay special attention to the practical absence in tasks and functions of ground-based, including promising robots, on the possibility of mobile mining and undermining high-power charges. In other words, kamikazes are not provided in modern domestic and foreign robotics. At the same time, the presence of such functions in the RTK VN allows for the quick and effective destruction of enemy fortifications. Such robots are especially needed in combat operations in urbanized areas, when a large number of capital buildings and structures are transformed by the enemy into an extensive system of protected firing positions. As it was, for example, in Syrian Aleppo.