February 3 2017
36
The new Mauzer rifle was so successful that the entire World War I fought in the Weimar army almost unchanged, the army of the Weimar Republic was armed with it, and then the Wehrmacht fought with it in World War II. In a variety of ways, it was exported and produced on the basis of licenses in Austria and Poland, Czechoslovakia and Yugoslavia, in China and in various other countries, including Sweden and Spain. 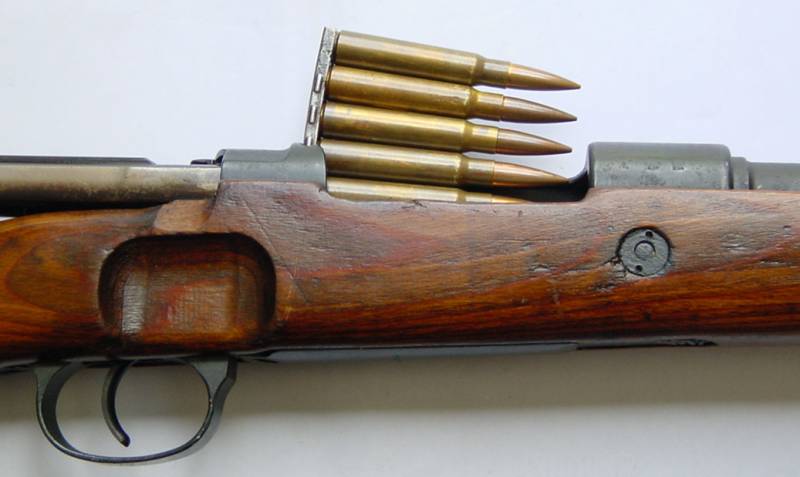 Simultaneously with the Gewehr 98 rifle, Mauser developed the Kar.98 carbine, but it was produced only until the 1905 year, when a new X7,92 × 57 mm cartridge with a pointed bullet entered service. In the 1908, the Gewehr 98 base appeared Kar.98a (К98а). The length of the box and, of course, the trunk was reduced in him, but the main thing was that he had the bolt handle bent down, a special hook under the barrel to put on the goats. Then came the most massive modification of the Karabiner 98 Kurz, a model made in the 1935 year and adopted by the Wehrmacht as its main individual weapons. Improvements in it were small: changed the scheme of attachment of a gun belt, sights (fly fixed in namushnikom). Interestingly, the name “carbine” does not fit this pattern from the point of view of Russian-language terminology, or rather, “not quite”. It is more correct to call the 98k Mauser a “shortened” or “lightweight” rifle. The fact is that in German terminology it turned out that some German "carbines" were longer than rifles of the same type. But later they also began to denote a shortened rifle, so if you delve into all these linguistic difficulties, it is not difficult to go crazy. But from the technical point of view, “size matters”, so let it be a “shortened rifle”. 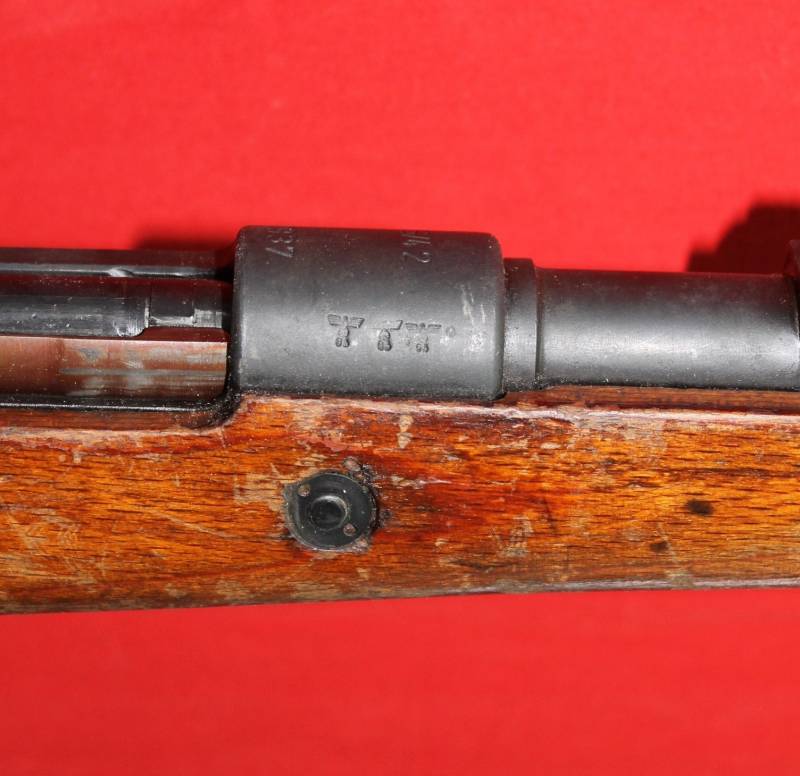 This model was launched in the 1935 year, the most interesting being the marking of the manufactured weapon. For some reason, even on instances of 1937, one can see both the old German eagle and ... the stylized Nazi "bird". Here they are - for some reason, three! 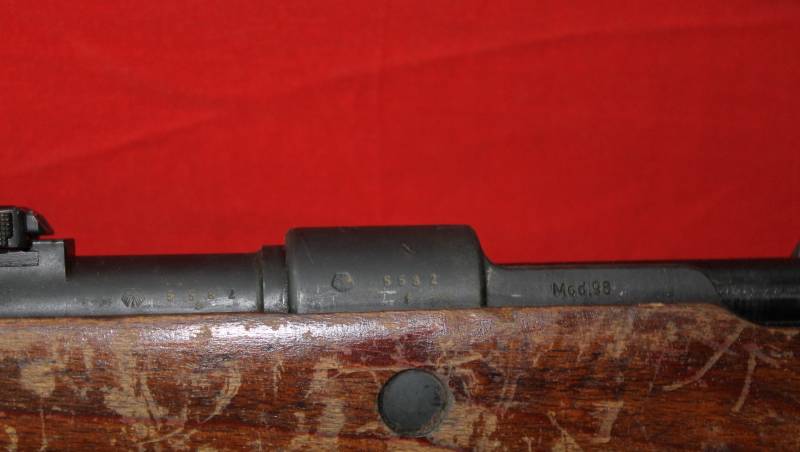 But from the opposite side - he - "Weimar Orlik."

During World War II, 98k mass production required a lot of change in production technology. So, the lodges began to be made of beech plywood, which was replaced with walnut wood, which is why the weight of the carbine became more by 0,3 kg; some parts began to be made from sheet metal by stamping; began to use spot welding; simplified the scope with the shutter; instead of bluing, parts of the rifle began to phosphate; lining the blades of the blade bayonet began stamping out of bakelite. 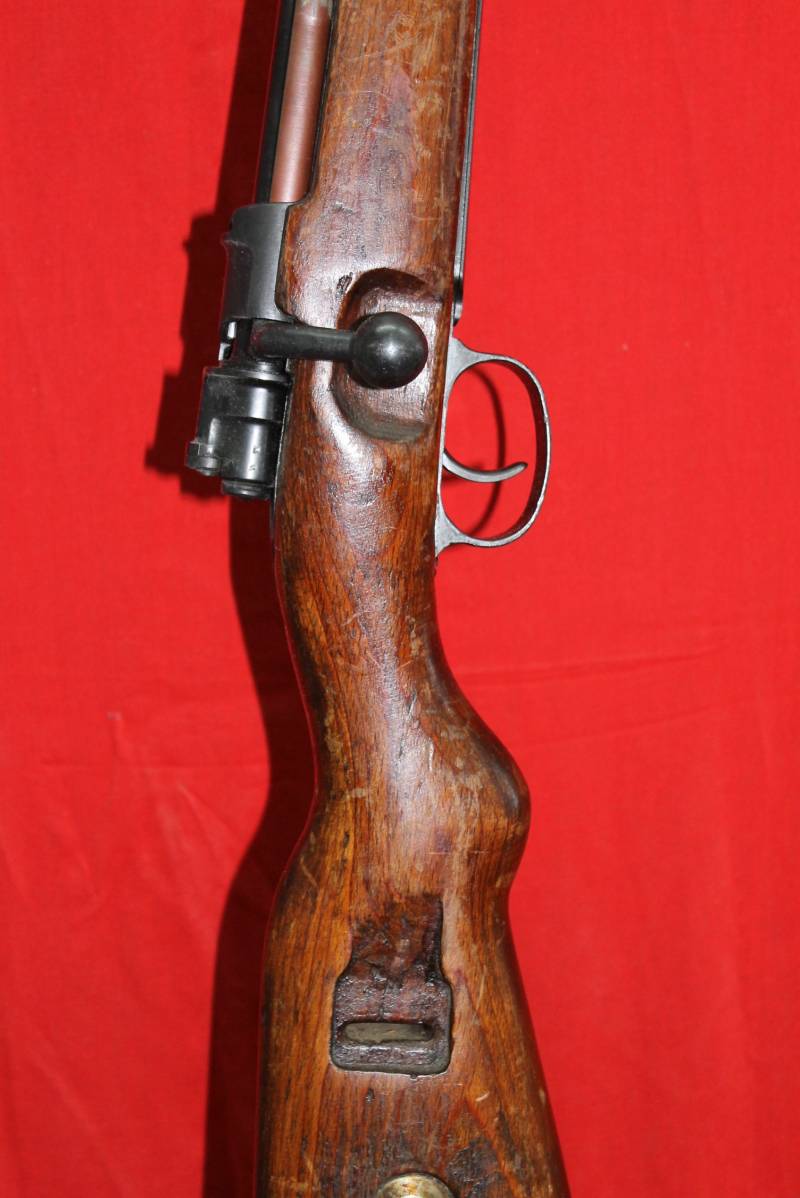 Characteristic features of the 98k are the bolt handle, the recess under it on the bed, the slot for the belt on the butt.

In addition to Germany, 98k was produced at Czechoslovakia plants from 1924 of the year to 1942 of the year. The Czech rifle had a slightly different design, it was somewhat shorter and more comfortable than the Gewehr 98. The plant where these rifles were manufactured was located in the town of Povazska Bistrita. 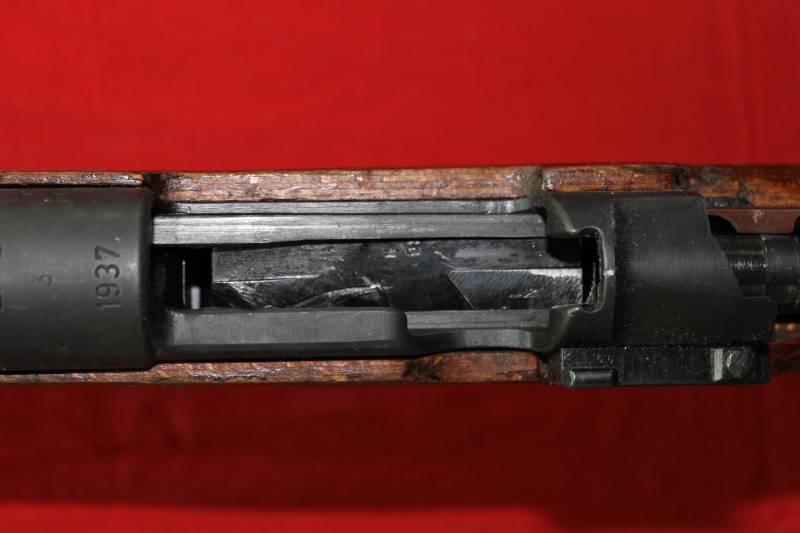 The year of manufacture is indicated on the breech breech. All parts are blued, including the feeder.

By design, any Mauser, as we have already seen, is a magazine rifle, which has a sliding bolt with a rotation of 90 degrees at locking and three lugs. Two in front of the bolt and one in the back. The reloading handle is also at the back of the shutter and bent down. Venting holes are provided in the gate through which, in case of gas breakthrough from the barrel, they go down into the magazine cavity. The shutter can be removed without the help of tools, as it is held in the receiver with a special retainer, which is located on it to the left. The fuse is placed in the middle position, the front part of the lock is pulled back and you can pull out the bolt. The ejector does not rotate, it captures the rim of the cartridge and rigidly holds it pressed to the gate. Thanks to this, even the “tight” liners are removed without much hassle. For disassembly of the shutter, a metal disk with a hole on the butt (eyelet) is used, which is needed as a stop. 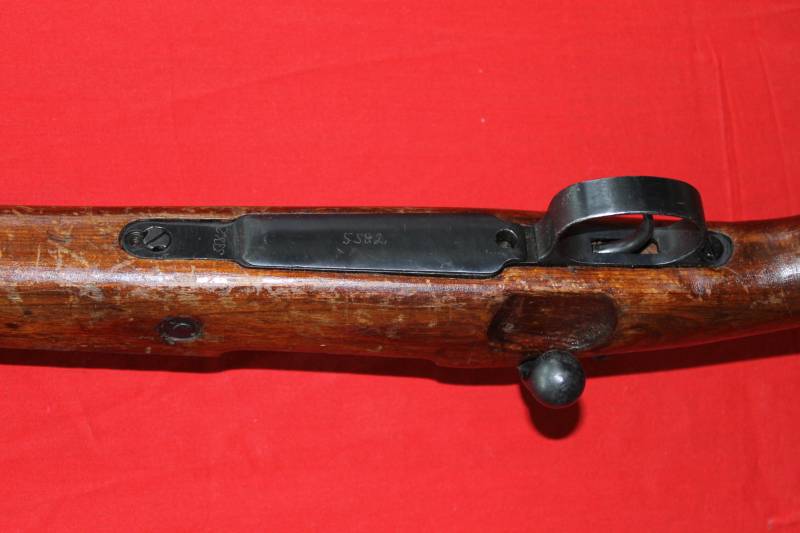 Shop cover. There is a hole in it, and a button in it. You can click the tip of the bullet and ... "til open." Conveniently!

Double row store is well thought out. There are five rounds in a checkerboard pattern, and it is completely hidden in the box. You can charge from the holder or insert cartridges one by one. But in the chamber of patrons can not be inserted by hand, it can cause tooth breakage in the ejector.

The course of the trigger is made with a warning that is convenient. Whether the drummer is cocked can be easily determined by the position of the protruding shank, both by touch and visually. The fuse is three-position, flag, flip, located on the bolt in the back of the year with 1871. It can be put in three positions: if horizontally to the left, it means that “the fuse is on, the shutter is locked”, if it looks vertically upwards, then “the fuse is on, the shutter is free” and, finally, horizontally to the right - you can shoot! The "up" position is used when loading and unloading a rifle, and to extract the shutter. Control the fuse with the thumb of the right hand. 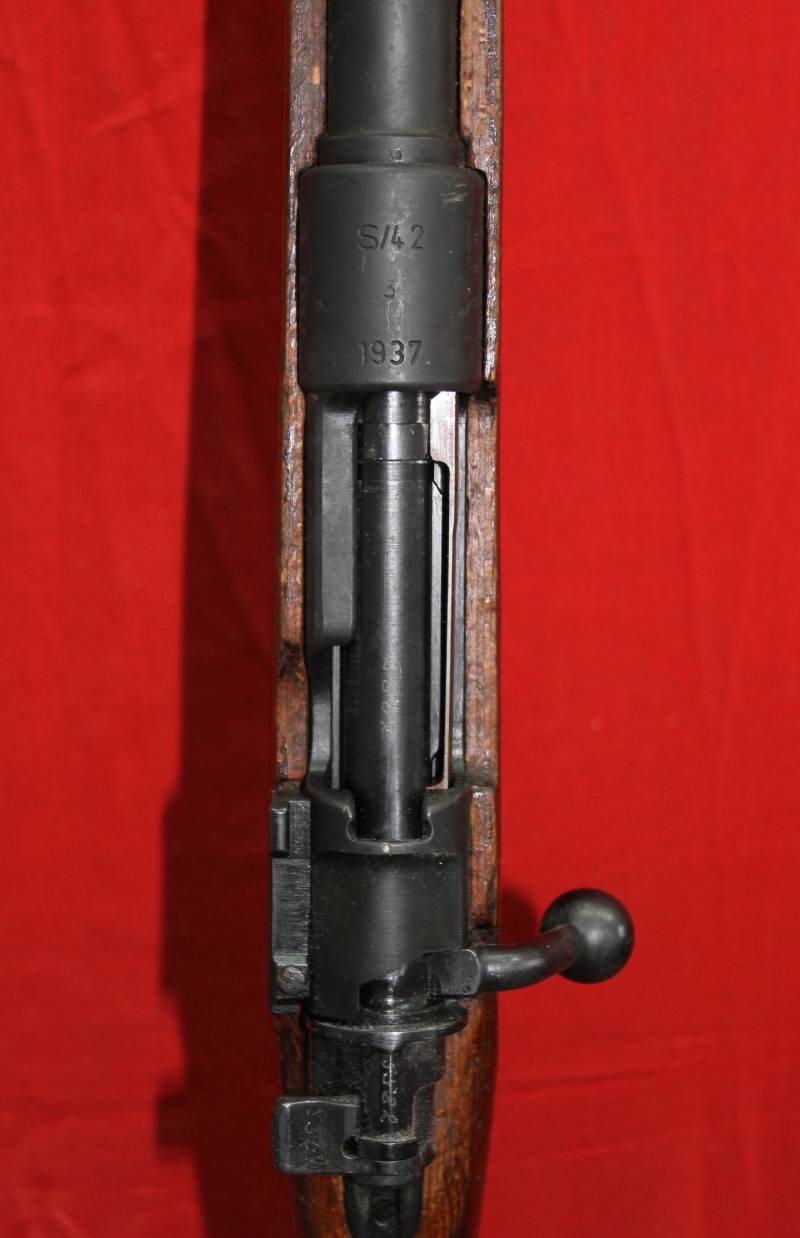 The fuse on the gate is on, the shutter itself is locked.

The sight is sector, consists of an aim block, an aim level and a collar with a latch. The divisions are from 1 to 20 and each division is equal to 100 m. The front sight is on the base of the muzzle of the trunk and on some samples, it is closed by a semi-circular removable headset. On this sample it, however, was not. 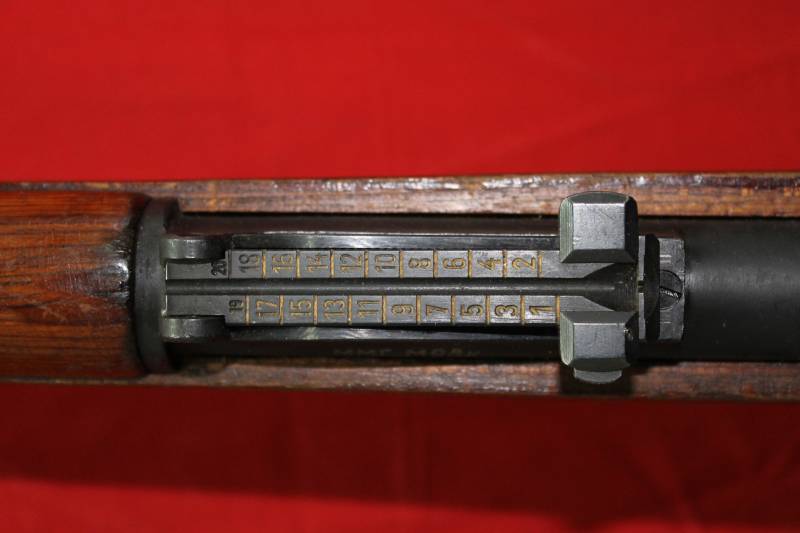 The box has a characteristic semi-pistol grip. The butt plate is made of steel and has a door in it that closes the accessory cavity. The ramrod is under the barrel. Moreover, as in previous samples, it is a half-billow. To clean the rifle, a standard length ramrod is screwed out of the two halves. As you can see, the "fight" with the weight was literally per gram. 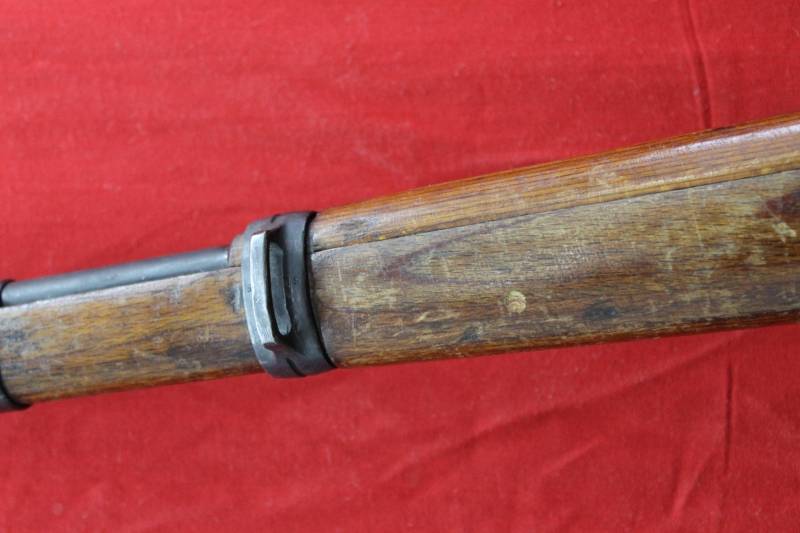 Instead of the traditional two sashes for the belt, the front was combined with a box ring, and instead of a back sling, a through slot in the butt was made. The 98k has an advantage over early models that the holder is thrown when the shutter is sent, and the feeder is designed so that when the magazine is empty, it will not allow the shutter to close, which is convenient for shooters with poor memory. 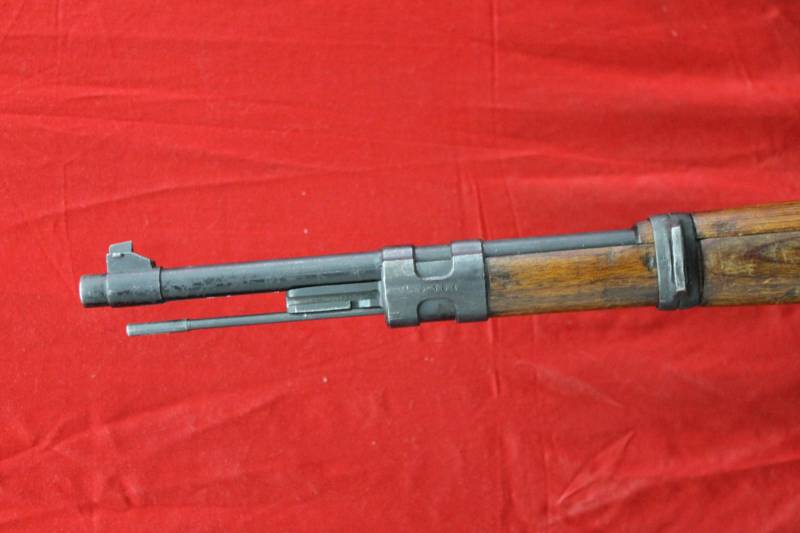 Like rifles, carbines in the German army had different types of blade buttons attached to the tip of the box. But since the bayonet fighting for the Second World War turned out to be an atypical affair, in order to save money, at the end of 1944, the weapon was no longer equipped with bayonet knives. 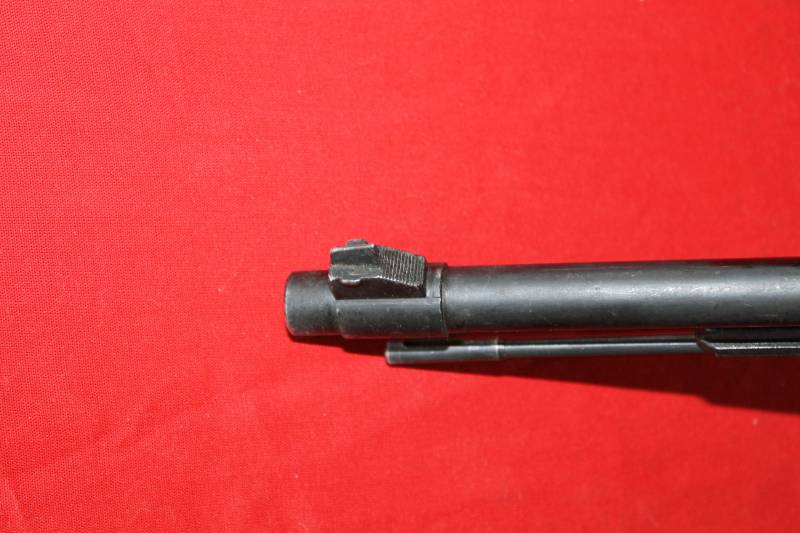 On the basis of a front sight antiglare corrugation! “Trifle, but nice!”

Advantages:
- The effectiveness of the bullet 98k;
- durable, simple in design, and safe to operate shutter, which provides high reliability and smoothness of operation, and has a large operational resource;
- stopping the shutter in the rear position warns the shooter about the need to load the weapon and eliminates attempts to fire from an unloaded weapon;
- placing the handle in the back of the bolt makes it possible to reload the rifle without taking it from the shoulder and not losing sight of the target, that is, without breaking the aiming monotony, which increases the accuracy of shooting;
- the store in the box is well protected from possible mechanical damage and it is convenient to carry it with such a store.

Disadvantages:
- Only five rounds in the store;
- despite the solid mass, the recoil is strong, the sound of the shot is sharp and loud;
- British "Lee-Enfield" has a higher rate of fire;
- quite difficult to manufacture.

Well, public recognition of Paul Mauser in strengthening the military power of Germany in 1898 received a political expression as a result: he became a deputy of the German Reichstag, and 14 of June 1902 was also an honorary citizen of Oberndorf. When he 29 passed away on May 1914, the mourning black flags were hung on the buildings of all well-known weapons companies from various countries. 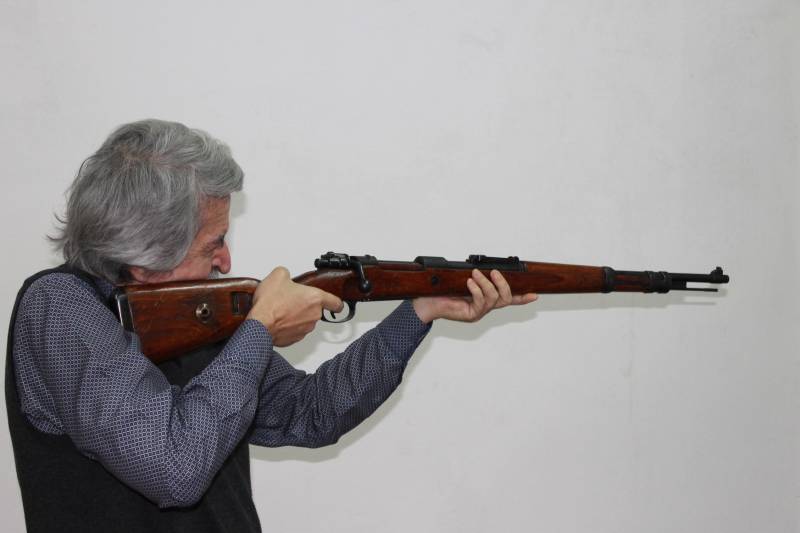 Personal impressions.
I do not know how to shoot, but in the hands of this carbine seemed to me somehow less convenient than ... Spanish. Firstly, this one is obviously harder, though not a bit, and secondly, the pistol grip, which is so praised by everyone, did not seem to be lying very well “by the hand”. That is - yes, it is convenient, who argues, but not only the “Spaniards” seemed more comfortable (after I held them all in my hands several times), but even “Karl Gustov”. Here is a purely subjective impression of this "Mauser", which is even surprising. That is, if it came to shooting, then I would definitely choose Mauser, yes, but not German, but Spanish No. 2 (1 place), Spanish No. 1 (2 place), then Swedish "Karl Gustov" (3 place) , and I would put the above model only on the 4-th place! Although this, of course, is a purely subjective opinion.