About sea wolves. Continuation and answer to the question 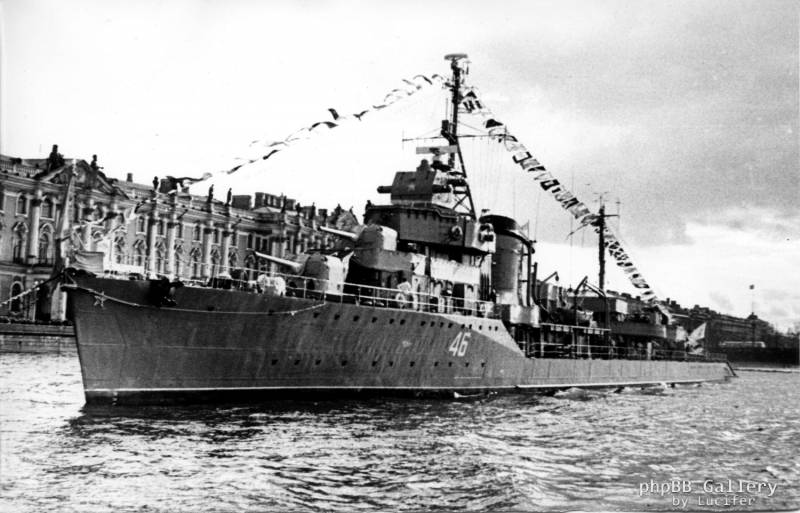 Having studied the comments to the first part, I would like to answer the first line of the question asked by one of the readers: where are the night attacks, torpedo fans and all that? The answer is simple. And nothing of this in 1939, was not yet. There was no battle at Narvik, the northern convoys, the battle in Leyte Gulf and many other events in which the destroyers took direct part. It was all ahead.

The purpose of the article was to show the level of development of shipbuilding and the level of understanding of the tasks of the creators of the ships before the start of the Second World War.

The very first battles of that war showed that the shipbuilders, no matter how softly they said, did not quite understand who would be the main enemy at sea. But the main and most terrible enemy, oddly enough, was the plane.

Americans who have experienced the impact power of the deck aviation, in fact, immediately took up the rearmament of their destroyers. In the first article, I cited data from the Sims EM. Here I will give the data of those ships that followed the Sims in 1941-42. 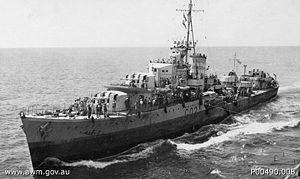 And here it is worth noting that artillery and even torpedo armament began to give way to air defense and means of fighting submarines. Judge for yourself. 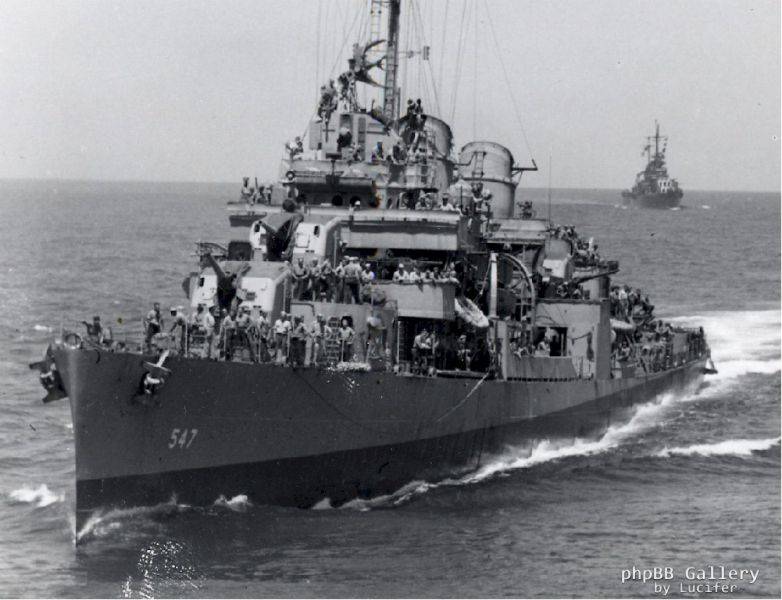 “Benson” and “Bristol” are practically not divided, it is considered that “Bristol” is a subtype of “Benson”. The differences between them are exclusively in armament. And here is a big difference. 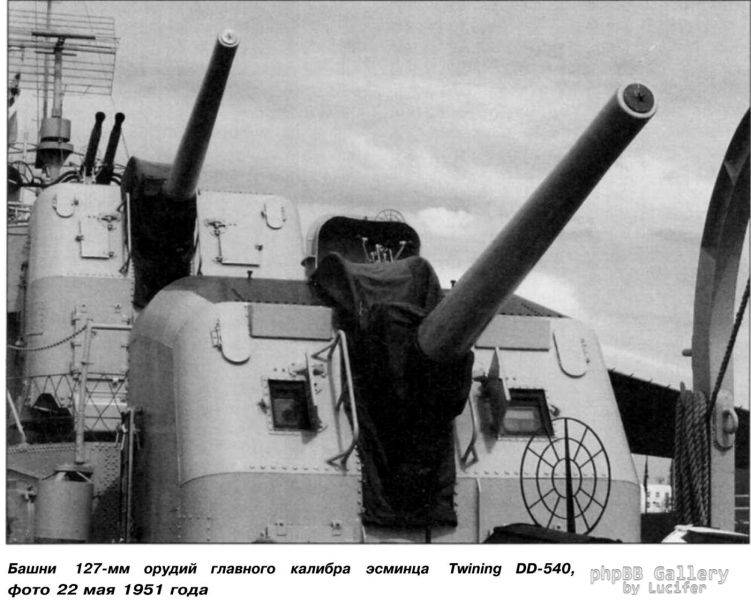 As you can see, the Americans very quickly abandoned one gun and one torpedo tube in favor of air defense.

But that's not all. In the 1944, the 24 destroyer type was once again radically refitted.

12 ships in the Atlantic fleet and 12 in the Pacific. The second torpedo tube was removed on the Atlantic ships, artillery was reduced to 3 guns, the air defense consisted of 4 × 40 mm guns (2 × 2) and 7 × 20 mm machine guns. Ships received magnetic and acoustic trawls. In general, it turned out something like an ocean minesweeper with rather powerful weapons for ships of this class and a large radius of action.

And I must say that these alterations bore fruit. Of the 96 “Benson”, “Glivez”, and “Bristol” built, the entire 12 was sunk. Of these, aircraft destroyed the 4 of the ship, 5 destroyers sank the other ships with artillery fire and 3 accounted for mines, torpedoes and other collisions.

And, finally, the star of the American shipbuilding, record holder in the number - EM "Fletcher". 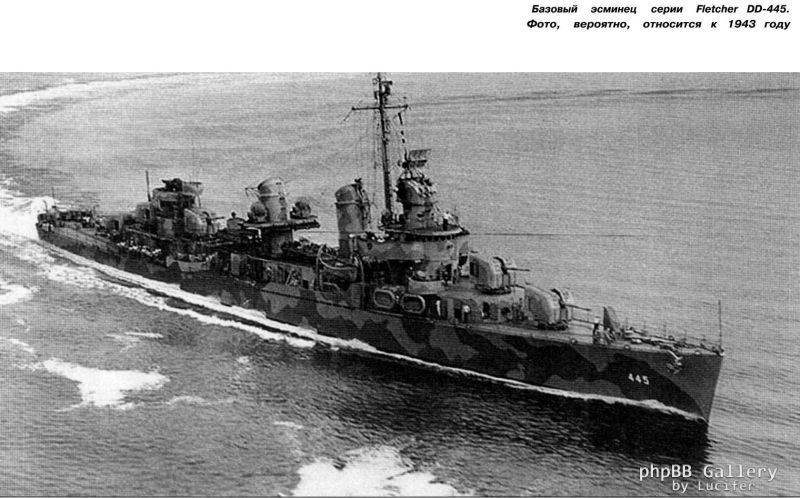 Since these ships were built "in pursuit", then with their weapons they took into account the combat experience that had already appeared by that time.

It is worth noting that with the beginning of the Second World War, all agreements to limit the tonnage of warships were quickly forgotten. From here and the increased sizes of "Fletcher" in comparison with pre-war "Sims". 2924 tons full displacement versus 2477.

Fletcher had the following characteristics: 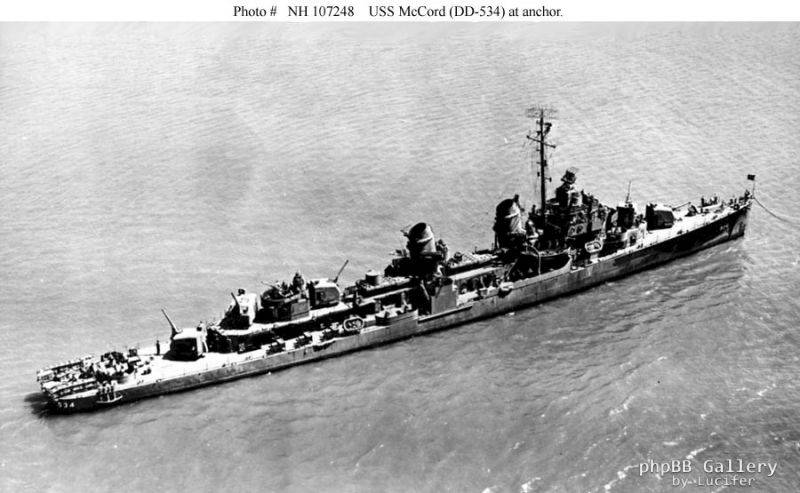 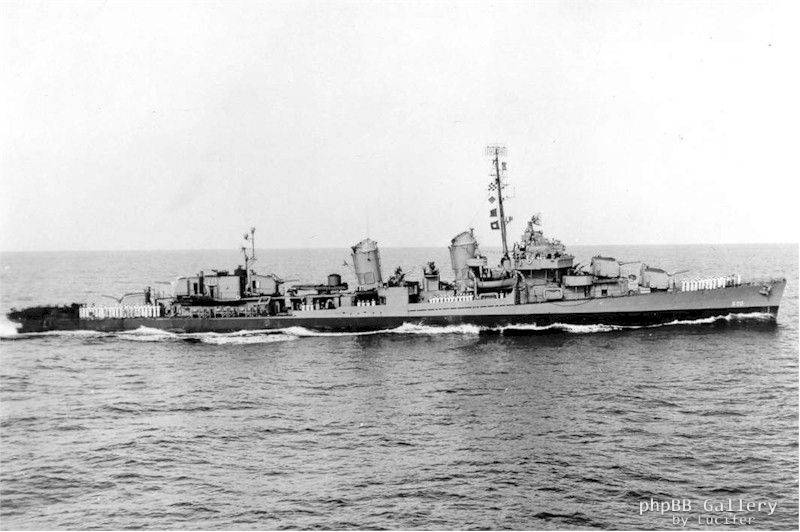 From 175 built destroyers during the battle was lost 23 ship. Aviation accounted for 7 units, artillery fire from other ships destroyed 4 destroyers, mines and torpedoes of submarines sank 11 ships, 1 died in a collision.

By the beginning of the war, Great Britain had the largest fleet, including destroyers. The outbreak of hostilities with Germany and especially with Japan showed that the British destroyers are not capable of fighting equally with opponents. The losses incurred forced the Admiralty to begin the development of new ships that more meet the requirements of wartime.

It can be argued with some certainty that the British destroyers of the O and P series were a cut above the predecessors discussed in the previous article. 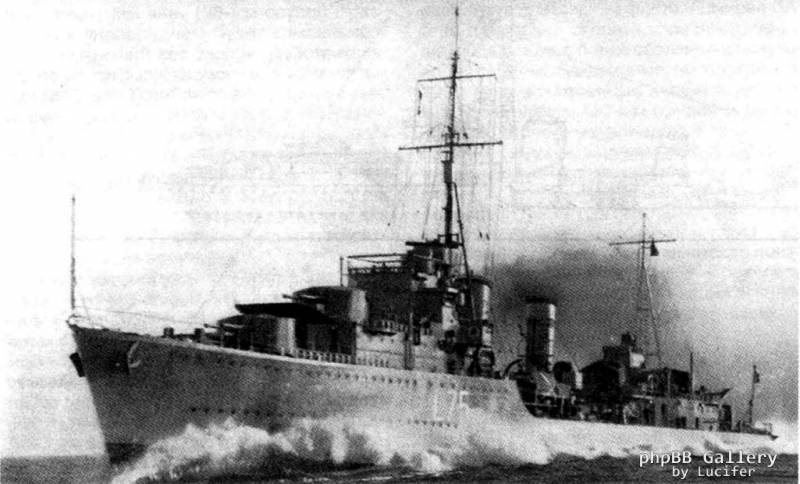 Not much different from their predecessors in size, the new destroyers became, on the one hand, faster, on the other hand, their armament significantly increased.

The situation is similar to the Americans. Minus one torpedo tube, minus two-gun turret, two bombers added, increased depth charge bombs.

By the way, many destroyers generally lost 120-mm guns, which were replaced by 102-mm anti-aircraft guns. The reverse alteration was in 1945, when the Allied aviation gained full air supremacy. 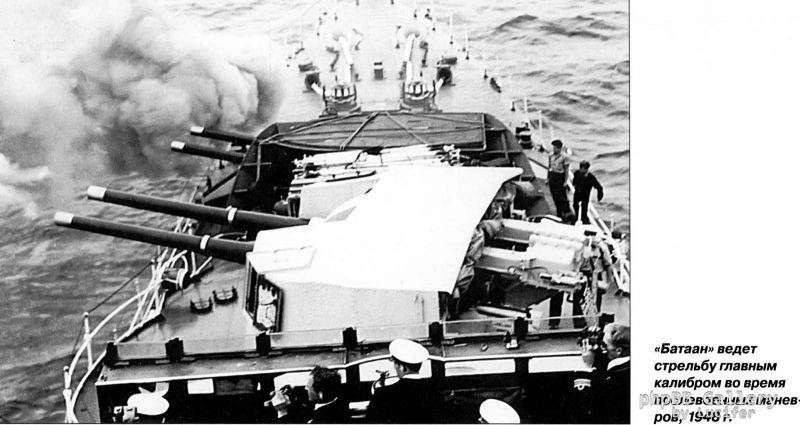 In addition, the British installed on this and subsequent series of destroyers not only the Asdik sonars, but also radars. In addition to the “272 type” navigation radar, the ships were equipped with “285 type” and “291 type” radars, which were used to detect the enemy on the water and in the air and to target weapons. 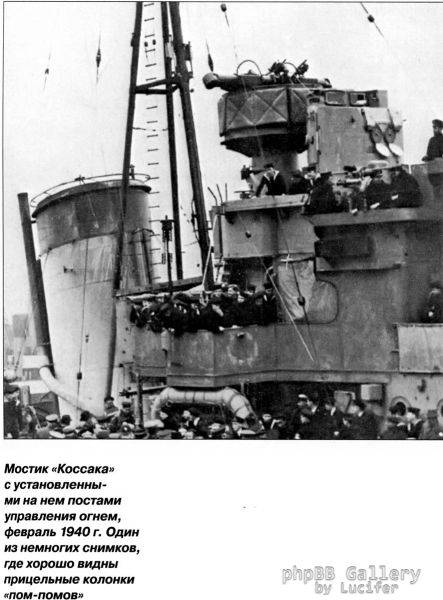 Losses among these destroyers from aviation turned out to be different from those of the older generation. Of the 16 destroyers, only 4 was lost. Of these, the aircraft destroyed the 1 ship, the 3 of the rest on the account of German submarines.

For comparison, 24 was lost from the Jervis 14. The aircraft drowned the 9 ships, the 1 destroyer was destroyed by artillery fire, and the mines and torpedoes of the submarines were sent to the bottom of the 4 ship. 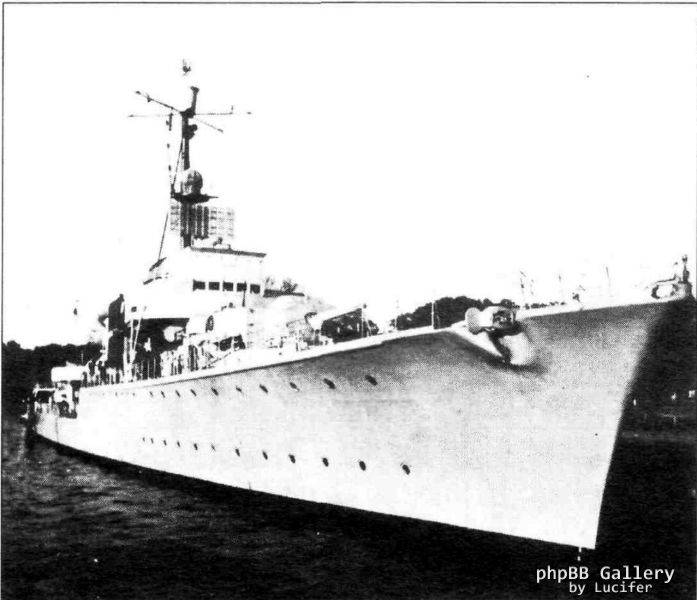 Since the beginning of the war in Germany, they quickly stopped all work on the so-called “ocean destroyer” of the 1937 type of the year and returned to the successful 1936 type of the year, which was discussed in the previous article.

However, the understanding of the new conditions played a role in enhancing firepower. The result was the transition to 150-mm artillery. Destroyers of the 1936A type did not receive nominal names, and informally referred to the type "Narvik".

Displacement - 2603 T standard, 3597 T full (data for Z-29 and Z-30, in general, in / and all the EMs differed somewhat, depending on the manufacturer, because they were built at different shipyards). 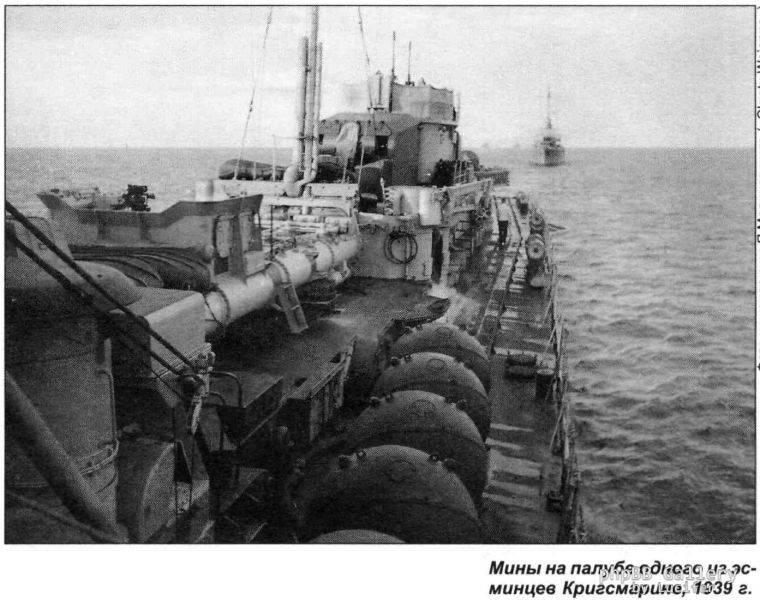 German destroyers in their characteristics closer to the leaders of the destroyers, and compare them with the British and American counterparts is not easy. But it is worth noting that the losses from aviation were significantly lower than those of their classmates. Of the 10 Germany lost EMs of this class, aviation accounts for all 3. Another 3 were sunk in artillery battles, exploded on mines and sank the ship's 4. 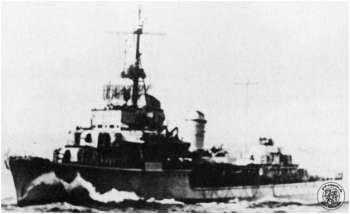 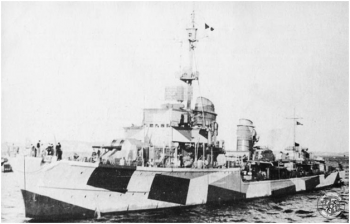 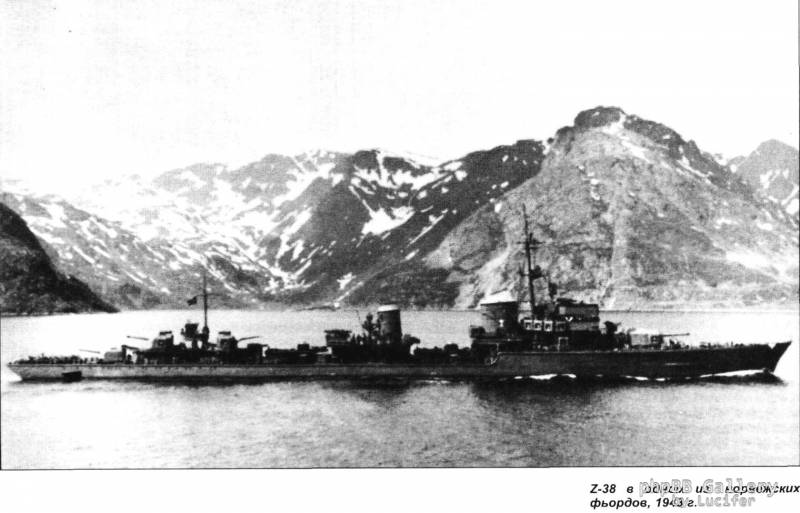 During operation, it turned out that 150-mm guns do not correspond to the requested characteristics in pitching conditions, and on subsequent battalions of destroyers they were abandoned in favor of 128-mm guns. 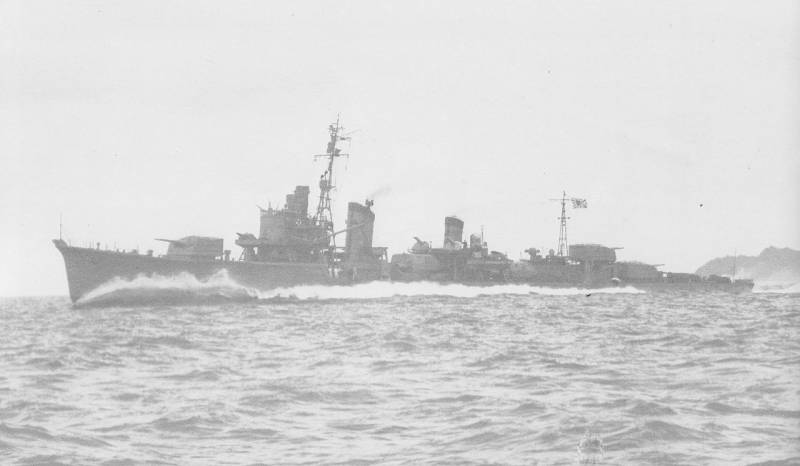 Japanese shipbuilders took a slightly different path, planning destroyers precisely as ships of torpedo-artillery attacks. The so-called "class A" or the destroyers of the series "Yugumo" was developed. Practically, it was slightly increased in displacement "Kagero". 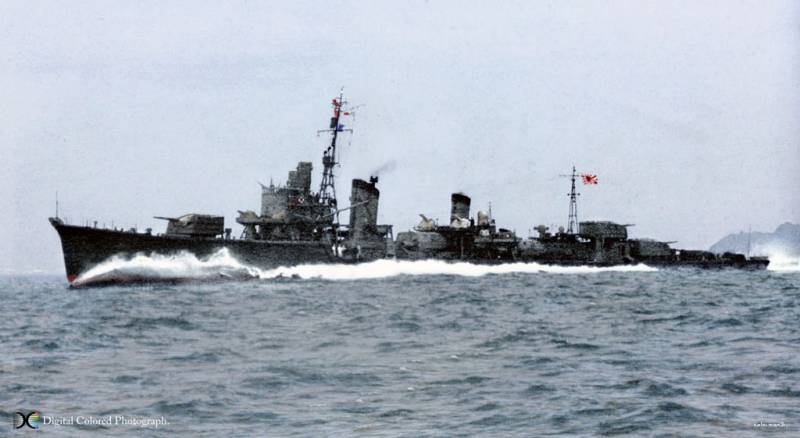 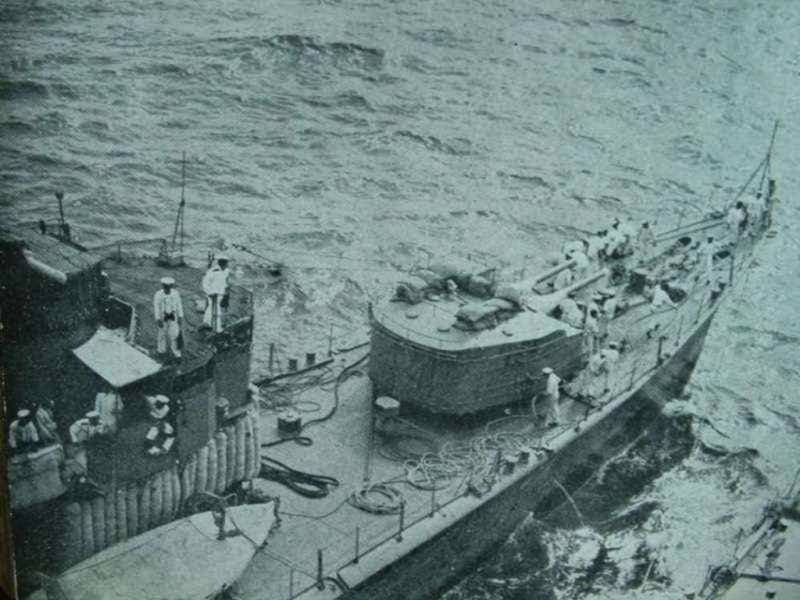 The bow of the EM "Yudashi"

The overt weakness of the air defense on these destroyers forced the Japanese shipbuilders to dodge as soon as possible, up to the dismantling of one of the gun turrets and the installation of either an 8 type 127 anti-aircraft system or mm 25 automatic guns. As a result, the number of 25 mm trunks on the Yugum-type EM was brought to 28. What is worth noting did not help much in general. 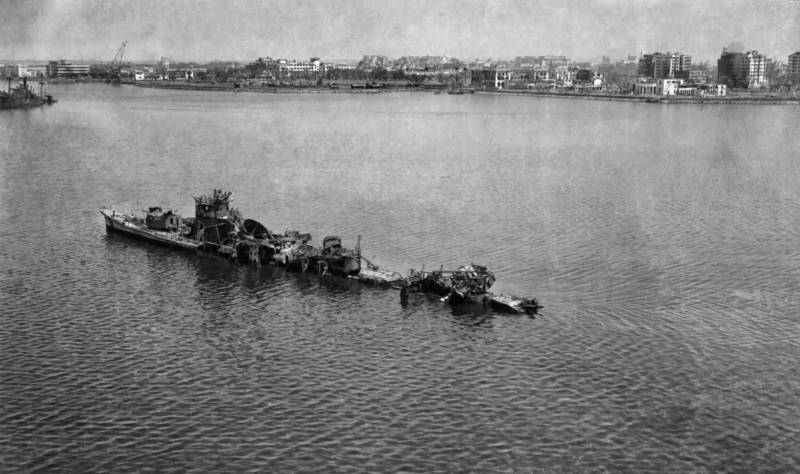 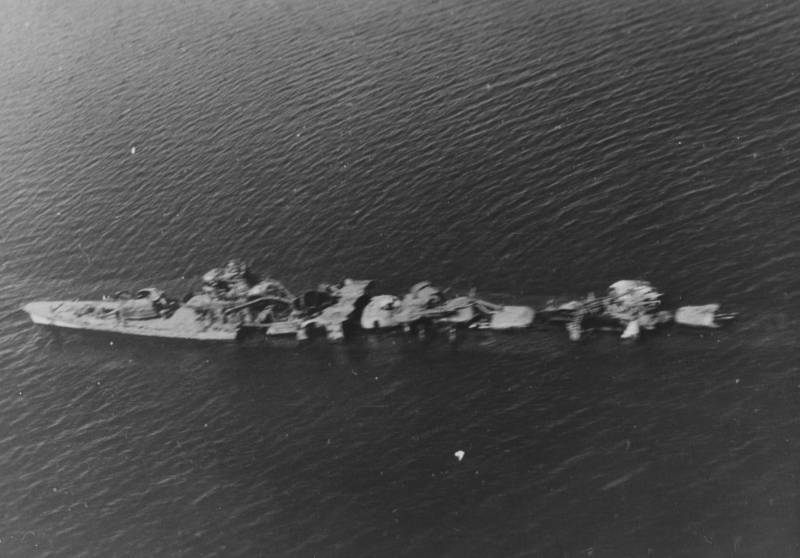 Soviet destroyers also underwent changes, but not so significant. History 7 project, which had to be converted into a 7U project, is known. Since the ship’s machines remained the same, the speed and seaworthiness did not actually change. Yes, and weapons remained at the same level.

A distinctive feature of the "sevens" was just very weak anti-aircraft weapons. From the analysis of the combat experience of Soviet destroyers, we can draw interesting conclusions. Some ships (in the Pacific) did not fight at all. If we take all the destroyers of the 7 and 7U project (since this is actually the same thing), then we get a number in the 36 ships. Of these, 18 died. Exactly half.

And the pattern of distribution is somewhat different than that of the Germans or the Americans. 9 destroyers destroyed aircraft, 8 died from mines and torpedoes, and 1 ("Smashing") was destroyed by a storm.

Definitely, it is simply impossible to compare the loss figures. To begin with, the Black Sea and Baltic destroyers had no other enemy. Totally. The only battle between large surface ships occurred in the Northern Fleet. And the tasks that were assigned to the destroyers were not envisaged by any pre-war plans. As, for example, the evacuation of troops from Odessa or Hanko, or delivery of goods to besieged Sevastopol.

Although some strengthening of air defense still was.

The 7-76-mm anti-aircraft guns remained on the destroyers of the 45-project, but instead of the 37-mm guns there were four 70-mm automatic 12,7-K anti-aircraft guns. And to two DShK and added two paired XNUMX-mm machine gun "Colt-Browning." 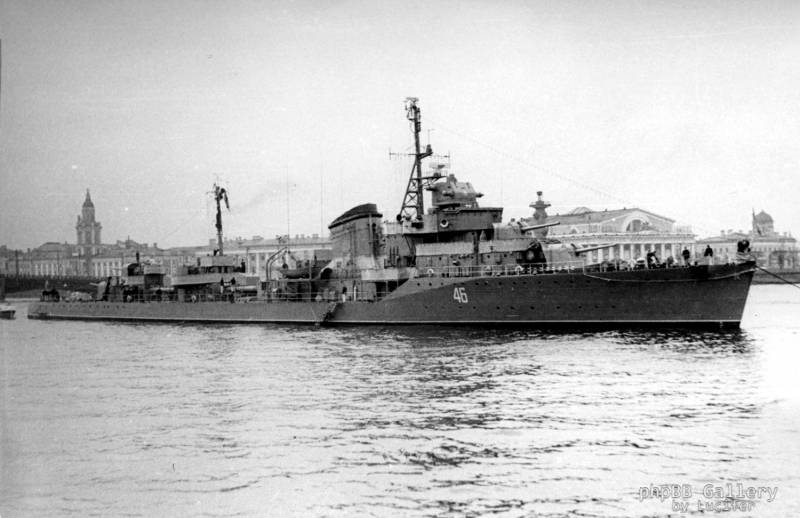 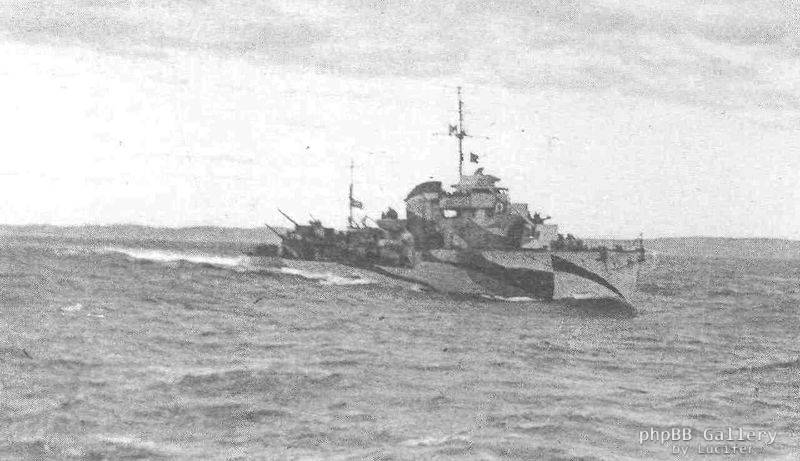 It is worth noting that during the war on the destroyers of the "7U project" began to install radar. As obtained under the Lend-Lease, and domestic production. English radars of type 286М, 291, American SF-1, SL and our Huys-1. The British 284 type fire control radar was experimentally installed on several ships.

The hydroacoustic equipment consisted of the Mars radar and the Arctur underwater communications hydrophones. During the war, the English sonar "Dragon-128" (or "Asdik") began to install ships on ships.

As a result, it can be said that the Second World War became a factor that finally formed the class of destroyers, and transformed them from auxiliary ships, whose main task was the fight against the destroyers into a class of universal ships capable of performing, in modern language, anti-aircraft and anti-submarine defense functions. .

Unlike their senior colleagues of the battleships, the destroyers did not lose the battle with aviation, but became a worthy opponent for the aircraft. And far from the most desirable target. And the development of sonar equipment turned the destroyer into the most formidable enemy of submarines.
This is precisely what explains the fact that, after more than 10 years, destroyers have been the main non-aircraft carrier ships in the fleets of the world. The ships of the line long ago ceased to exist, having lost to the rocket and the plane, the cruisers gradually disappear into history after the "masters of the seas", and the destroyers ... the destroyers continue their service.

In the next article, as requested by the readers, we will examine in detail several battles of the Second World War, where the destroyers played a major role. And yes, there will be a lot of artillery duels and torpedo attacks. Including night.