January 24 2017
19
The development of an experimental tactical reconnaissance bomber TSR.2 was carried out by British firms English Electric and Vickers-Armstrongs, united in 1960 in the British Aircraft Corporation (BAC). According to the technical assignment received from the British military, the new aircraft was to replace the outdated English Electric Canberra bomber. Practical work on the manufacture of the aircraft TSR.2 began in 1960, while the work on the creation of a new bomber was somewhat delayed. As a result, for the first time, the 27 of September of the 1964 of the year took off for the first time. The delay in the creation of the bomber, as well as their high cost, was the reason that in 1965 the UK government decided to stop work on the TSR.2 aircraft. The Canberra bombers that were decommissioned were eventually replaced by the American F-4M Phantom Fighter Bombers (FGR.2).


History TSR.2 aircraft (stands for Tactical Strike and Reconnaissance) began in March 1957, when the United Kingdom Air Command issued requirements for an aircraft that was to replace the Canberra bomber. For the end of 1950, this was a very ambitious project. The designed bomber had to fly at supersonic speeds both at high altitude and at the surface of the earth. The aircraft was supposed to be all-weather, have a large radius of action, be a carrier of tactical nuclear weapons. In addition, the car had to take off from the unpaved runways, with a small run-up length during takeoff and landing run. In the reconnaissance variant, this machine was planned to be equipped with the most modern at that time point by means of electronic intelligence. 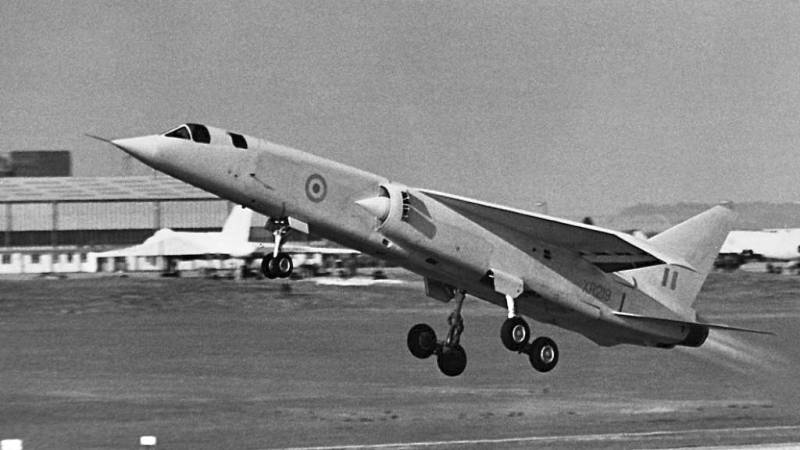 The first blow to the project of a promising jet bomber was dealt already in the same 1957 year. In the UK, the White Book, written by Duncan Sandys, the country's defense minister, was published. Published in April 1957, the book said that the era of manned aircraft is coming to an end, and the foreseeable future will be wholly owned by rocket weapons. For this reason, the government was asked to review funding levels and defense programs, focusing on the release of missiles. In those years, the missile "euphoria" also captured the USSR and the USA, but if the latter were able to eliminate the consequences of the "rocket-attack" of their own leaders in a few years, the British aircraft industry suffered much more significant damage.

The second test for the new aircraft was the fight against the project intended for the Royal Navy, the strike aircraft NA.39, which later became known as the “Bakenir”. But in the end, the TSR.2 project managed to be defended by representatives of the Royal Air Force, as they needed a high-speed bomber and reconnaissance aircraft, which had a supersonic flight speed, while the Buchanir was originally designed to solve other problems and was near-sonar aircraft.

As a result, on January 1, 1959, a contract was signed for the construction of three prototypes of the TSR.2 tactical bomber. According to the terms of the contract, the first production aircraft were to enter service at the end of 1965. The first prototype of the new bomber was ready in 1963, and its first flight took place only on September 27, 1964. The aircraft reached supersonic speed for the first time during its 14th flight; this happened in February 1965 on the way to aviation base in Wharton. During the flight, it turned out that afterburner is switched on only on one engine. In such conditions, with the fast and the furious engine, one third reached the speed of Mach 1,12. 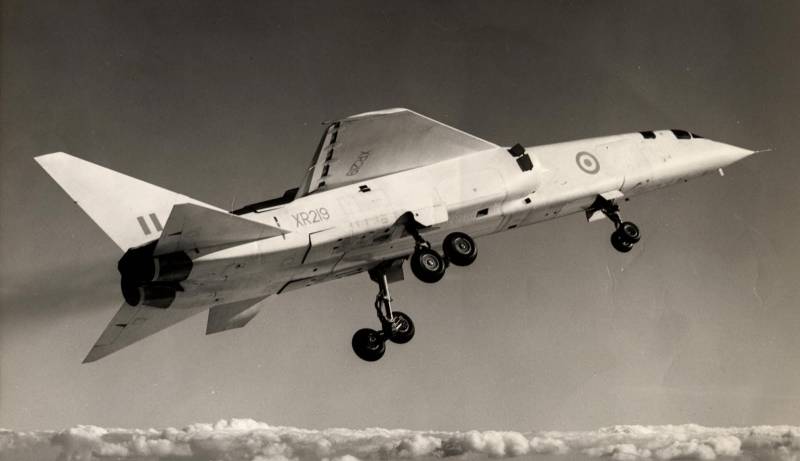 Already in 1965, the British Parliament decided to stop all work on the creation of a supersonic reconnaissance bomber TSR.2. This decision was motivated by the absence of the export potential of the aircraft (in the United States, which were considered as a potential buyer, the development of the promising F-111 was in full swing) and a significant increase in the cost of the aircraft development program. If in the 1960 year the estimated price of one bomber (when ordering a series of 150 aircraft) was 1,5 million pounds, by the 1964 year it had grown to 4 million pounds. Thus, one TSR.2 bomber cost the budget 20 more than its predecessor - the Canberra aircraft. In this case, the costs of the necessary development work during 7 years amounted to 100 million pounds.

The decision to wind down the aircraft development program TSR.2, voiced in 1965, in favor of acquiring American F-111 (later F-4M "Phantom" were purchased instead) became one of the saddest in the history of the British aircraft industry. The British personally put a cross not only on a promising combat aircraft, but also on a full-fledged development perspective of their own aviation industry, because with the development, testing and adoption of TSR.2 they gained invaluable experience in creating a multifunctional combat supersonic aviation complex. Such an experience could not be acquired for any money.

The first flight of the TSR.2 aircraft flew just 13 hours 3 minutes, it flew 24 times. But the second prototype of the bomber was even less fortunate. In September, 1964, the aircraft was damaged during the withdrawal from the hangar, its preparation for the first flight was completed only in April, 1965. At the same time, British Prime Minister Harold Wilson announced the closure of the program to create this aircraft. 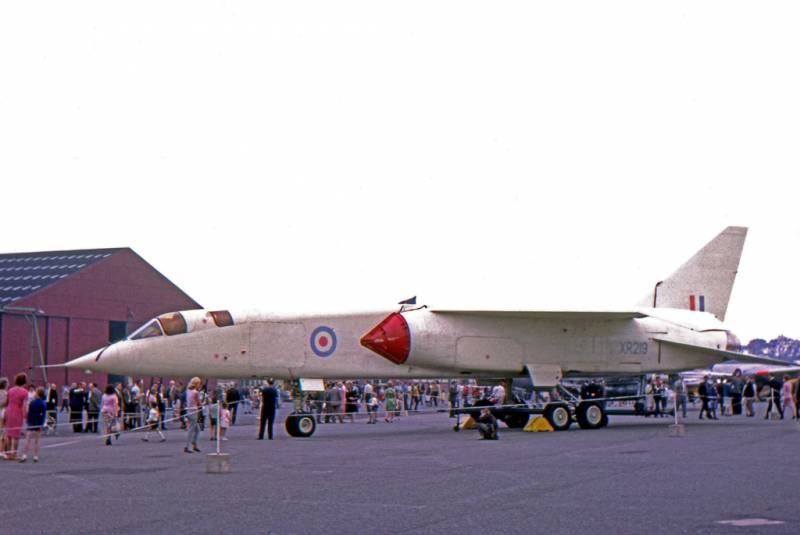 Of the series in the 9 aircraft, only the first three were ready by the time the program was folded. The rest of the bombers were in different stages of completion. In 1972-1973, when the last hopes for the resumption of the program were finally dispelled, all the existing reserves were sent to scrap. The same fate in the 1982 year befell the only flight model TSR.2. But the second and third aircraft are more fortunate. So an experimental bomber TSR.2 with a tail number XR220 is on display at the Royal Air Force Museum in Cosford, not far from Birmingham (the second prototype), another plane was donated to the Imperial Military Museum in Duxford.

The plane, in which large financial resources were invested, the project of which was quite ambitious, ended up at the dump of history. From the standpoint of our days, it was a typical representative of the third generation of jet aircraft, which was able to absorb almost all the achievements of the world military aircraft industry of the 1960 frontier. The power plant, aerodynamic characteristics, onboard equipment - all this was a reflection of its time period.

In terms of the layout, the TSR.2 very much resembled the Vigilant A-5 attack aircraft, which at that time was being used by the US Navy. The aircraft stood out primarily for its significantly elongated fuselage. It was the optimal solution for flying at high supersonic speeds. As the pilots and developers noted, from the point of view of aerodynamics, the new bomber was a success, but this could not be said about its engines and some other systems. The power plant continued to be a headache for developers and pilots throughout the trials. Also, complaints were caused by the air conditioning system in the cockpit, which could not withstand any criticism. 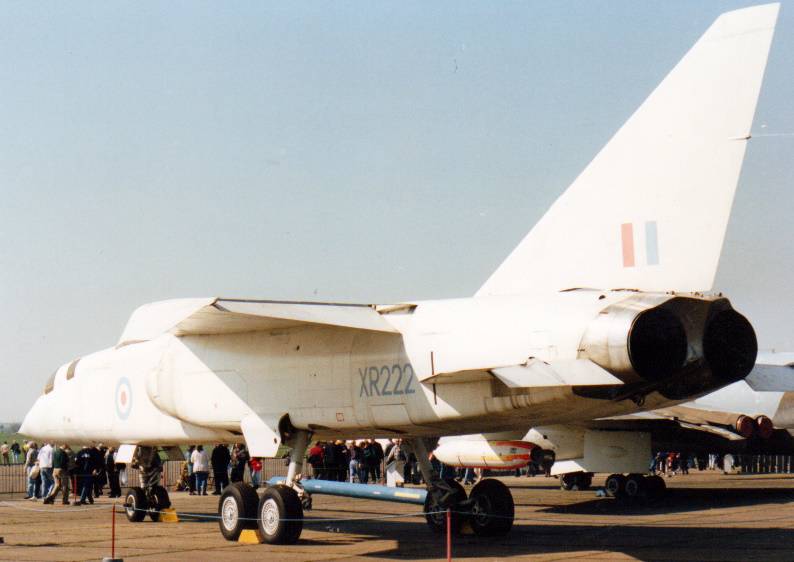 BAC TSR.2 was a high-profile, designed and built according to the classical scheme, with a triangular wing, characterized by a large specific load (low sensitivity to atmospheric disturbances when flying at a low altitude). The low-level trapezoidal wing with a sweep along the leading edge of the 60 ° had deflected downward consoles, which allowed the bomber to increase its travel margin and also provided an additional increase in lift force at supersonic flight speed. To improve the characteristics of the take-off and landing of an aircraft, flaps with deflation of the boundary layer (along the entire wing span), as well as the flat form of the lower part of the fuselage, were used. The bomber tail, which consisted of a whirlwind keel and stabilizers, equipped with small rudders, was called innovative.

The fuselage of the supersonic bomber itself was made in accordance with the area rule; it had a rectangular shape in cross section. The cockpit with pilot and navigator seats (located one behind the other) was equipped with a windshield blowing system. This was supposed to prevent its pollution by insects when flying at low altitudes. At the same time, the glazing of the cockpit lantern had increased strength, which also made it possible to avoid unpleasant consequences in case of a possible collision with birds. The ejection seats of the 0-0 class were installed in the cab.

Aircraft landing gear tricycle. The front pillar had twin wheels, the main pillars had twin wheels arranged in tandem. The kinematics of the BAC TSR.2 bomber's front landing gear made it possible to lengthen the main beam during the take-off, which, in turn, allowed the glider's angle of attack to be increased without deflecting the elevator (resistance was reduced). To reduce the mileage during landing, the aircraft was equipped with a braking parachute and four-section brake flaps. 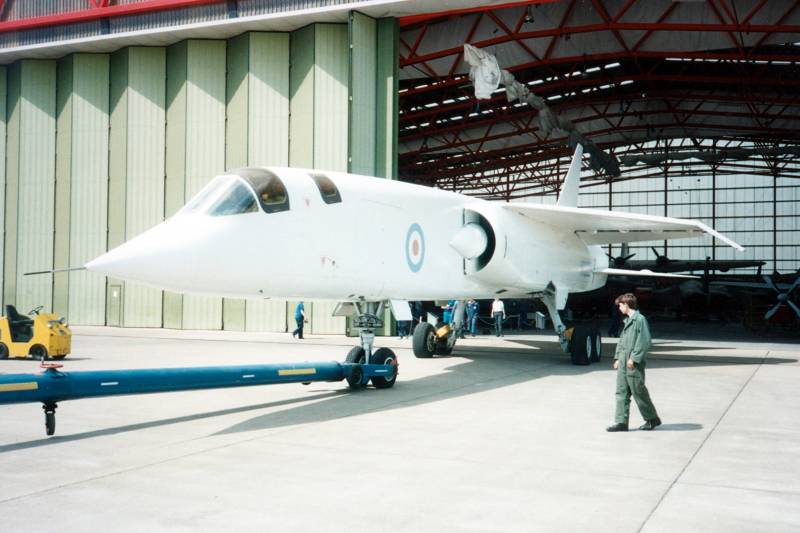 At the heart of the aircraft were the two Olympus turbojet engines 22R of the Bristol-Siddeley company, in the afterburner they could give out thrust 2x136,7 kN. The problem of choosing engines for the aircraft was one of the most difficult in connection with the high requirements of efficiency imposed on them. The absence at that time of the corresponding dual-circuit turbojet engine predetermined the use of single-circuit turbojet engines on a bomber. Side adjustable air intakes of the experimental aircraft BAC TSR.2 with movable half-cones had an elliptical cross-section.

The aircraft had no built-in armament. The maximum bomb load was 4500 kg. Bombs weighing up to 2700 kg, including tactical nuclear weapons, could be located in the bomb bay: one Red Beard strategic bomb or up to 4's tactical WE. 177 (by 2 in the bomb compartment and on the outer pylons). In the usual version of the bomber could be equipped with free-fall bombs and NARami, as well as the UR AJ.168 "Martel". All this, including additional fuel tanks, could be installed on 4-x suspension points under the wing of the aircraft.

The reconnaissance version of the aircraft was to receive an 3 built-in camera located in the nose of the car: one for perspective shooting and two located on the sides of the fuselage. Also TSR.2 was supposed to receive an infrared station with linear scanning, side-looking radar and other equipment. The novelty of the reconnaissance complex was to become the Linescan optical-electronic scanning system, which could “see” the surface of the earth day and night. On the TV channel, the data of this system could be transmitted to the ground control station on a time scale that was close to real. 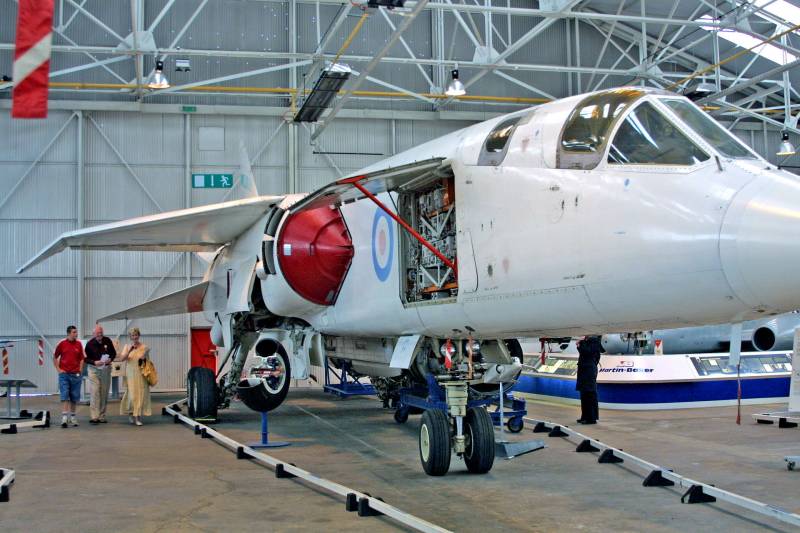 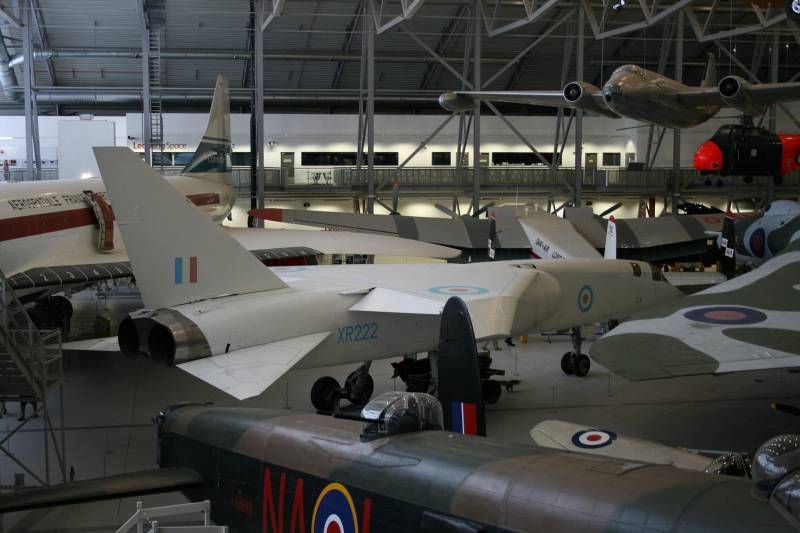 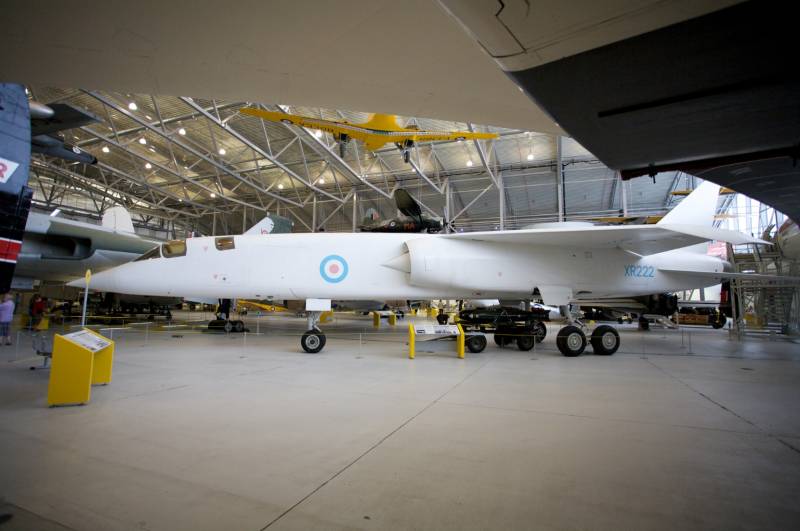 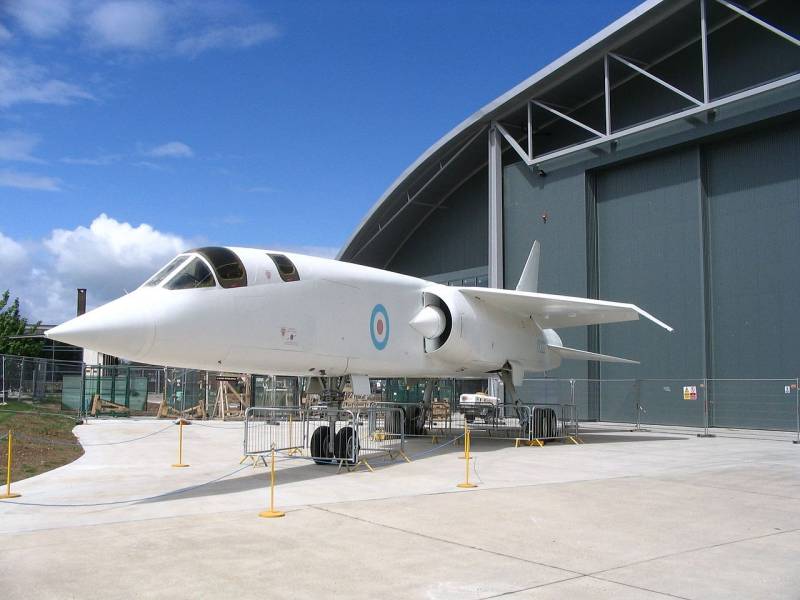