The World Ocean attracts Admirals of the Middle Kingdom 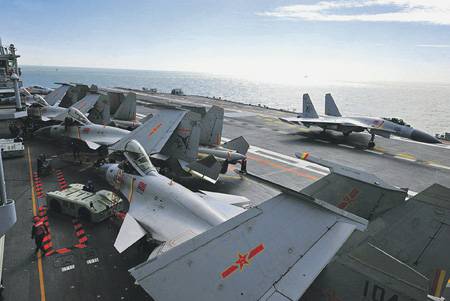 The surface forces of the Navy of the People's Liberation Army of China (PLA) are a kind of force designed to search for and destroy submarines; destruction of enemy surface ships, ensuring the combat stability of strategic submarine missile carriers (SSBNs), own naval force cover groups fleet, naval bases, ports, coastal infrastructure, ground forces (forces) in the coastal zone from attacks by enemy air attacks. In addition, they are intended to provide fire and other support for the combat operations of these forces in coastal directions, to solve tasks related to their rear support, the setting of minefields, mine action, the provision of sea transport, the transportation and landing of naval landing.

As part of the implementation of the PLA Navy modernization program, the task is to significantly increase the number of ships of the far sea zone — destroyers and frigates — and to significantly increase the range of combat missions they solve. Realizing that without aircraft carriers, the PLA Navy will limit its operations only to areas where it can be supported aviation ground-based, the Chinese military leadership has developed and approved the program for the construction of aircraft carriers.

With the growing influence of the PRC in the world, its increasing role in solving regional and global problems, international functions are becoming increasingly important in the spectrum of the Navy’s functions, which are related to the implementation of bilateral or multilateral agreements relating to ensuring and expanding confidence-building measures UN and regional international organizations in conducting peacekeeping and rescue operations, participation in anti-piracy actions.

With regard to the demonstration of force, aircraft carriers and the combat ships that provide them with actions that make up the carrier strike group (AUG) are considered to be one of the most effective tools in the ocean spaces. In addition to solving specific operational tasks, China’s desire to have aircraft carriers in the PLA Navy’s combat operations is related to the fact that ships of this class are considered to be among the attributes of a great power and are most suitable for performing demonstration of power.

The basis of the surface forces of the PLA Navy are squadrons of destroyers and frigates of various types, including those equipped with assault guided missile weapons (URO) and ships of coastal defense: patrol ships and rocket boats (RCA). During the modernization of the Navy, the main focus is on the development and construction of multifunctional warships with powerful weapons of various purposes: anti-ship cruise and ballistic missiles, anti-submarine weapons and air defense weapons. Destroyers and frigates provide anti-submarine helicopter bases.

The most modern among the PLA Navy surface ships are the destroyers of the UR type of “Modern” acquired in Russia (according to the Chinese classification of “Hangzhou”) and the destroyers of their own Chinese development of the type “Luoyang” and “Liuzhou”, which are the 3 ++ generation warships.

Destroyers of the URO of the “Modern” type were designed in the USSR in the 1980s. For strikes on surface targets, ships of this type are equipped with two quadruple launchers of supersonic anti-ship cruise missiles (PKKR) "Mosquito" with a range of 240 km with the NATO designation Sunburn. For solving air defense tasks there are two sea-based anti-aircraft missile complexes (SAM) of the SA-N-7 type (Russian designation - “Hurricane”).

Destroyers of the URO-type "Luoyang", "Luoyang II" and "Liuzhou" belong to the ships of a similar class, but have even higher combat capabilities. They have a gas turbine power plant and powerful armament (two quadruple PKKR YJ-83 launchers (C-803)) and are equipped with more efficient air defense systems - 3РК SA-N-20 Gramble, allowing to solve the tasks of providing air defense in the combat area. The specified types of destroyers of URO were built using stealth technology, which reduces radar visibility.

The destroyers of the LYUD I, LYUD II, Hangzhou, Luoyang and LUIZHO URO, as well as all the latest frigates of the last projects, except Jiangha type I, have a helicopter landing deck and an internal hangar.

It should be pointed out that in combat capabilities of means of fighting surface ships, combat destroyers of Russian-built NLM destroyers of the PLA Navy and ships of this class of recent own-designed projects are comparable, and in some parameters, including firepower, are superior to modern American and Japanese destroyers. . Nevertheless, they are significantly inferior to the latter in anti-aircraft and especially anti-submarine weapons. Especially noticeable lag is observed in the field of intelligence systems and weapons control. However, the Chinese industry is creating new types of warships - with more modern weapons and technical equipment.

In addition to several dozen ships of the far and middle sea zone, including one aircraft carrier, the PLA Navy has more than 250 combat ships in the near sea zone. They also include the recently deployed Hubei-type 80 speedboats, each carrying 8 anti-ship missiles.