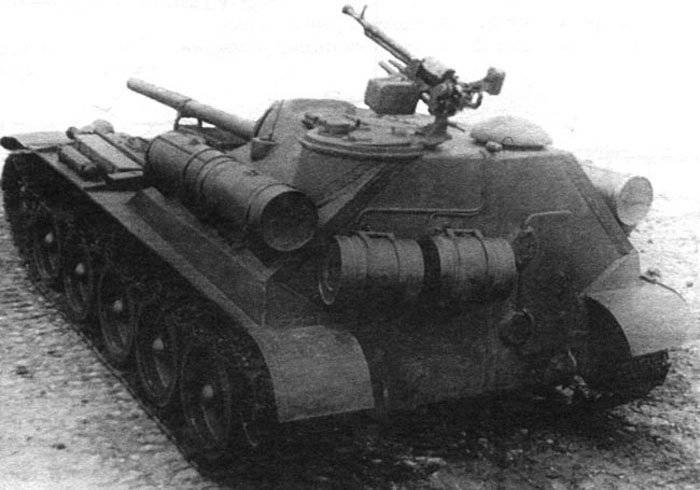 The decision of the technical council, the best project of SAU - SU-100-M-2. According to the order of the People's Commissar of Tank Industry from 21.10.44, No. 625, the plant starts to create a sample of SU-100-M-2 for testing. The ACS was surprisingly compact. The weight of the car did not go beyond the middle class armored cars, the booking of ACS could be significantly increased. In the 45 year, the commission from the People's Commissar of the Tank Industry after reviewing the progress of the work, remains satisfied with the situation and sets a deadline for the creation of the first sample for May 45. The sample is named "Uralmash-1".

March 45 of the year. The plant at an accelerated pace creates two samples of ACS - SU-101 and SU-102. SU-101 - ACS with a D-10С instrument of 100 caliber mm, and SU-102 - with a D-25С instrument of 122 mm caliber. Both samples were built by the deadline. Additionally, an artillery body was manufactured for conducting armor resistance tests.

Device SU-101
The auto-installation of the SU-101 self-propelled type was created on the basis of aggregates from T-44 and T-34-85. SAU belonged to the class of armored vehicles as an anti-tank tool. The project of ACS after testing suggested modifying and using more powerful guns with a large caliber on the tested SU-101 base. The layout of the ACS used aft manufacture of the fighting compartment. MTO according to the scheme - front location. The driver-mechanic is on the left in the nose compartment, on the right, the engine is located with transmission mechanisms. In the wheelhouse, reinforced armor, to the left of the gun, sit gunner, behind him the commander of the machine, to the right of the gun sits loader. To inspect the battlefield, the ACS is equipped with MK-4 instruments. The entrance to the car is through a hatch located in the aft of the cabin and the hull; a commander’s hatch is located on the wheelhouse; for the driver-mechanic, the hatch is equipped in the control room. The ACS bore the D-10С 100 mm rifle gun, previously used in the SU-100 self-propelled gun mount. In addition, the ACS had a large-caliber machine gun 12.7 mm DShK. The gun had vertical pointing angles from 2 to 18 degrees, horizontal pointing angles sectorally 22.5 degrees. For the production of direct fire shooting used telescopic sight type TS-19. For a shot from a gun from a closed position, a panorama of Hertz was used. The rate of fire from a cannon three shots per minute. Ammunition SAU - 36 ammunition for guns and 450 to the machine gun. The machine gun is mounted on the turret, which is mounted on a movable base commander hatch. Vertical pointing machine gun from 84 to -6 degrees. For firing at enemy air objects, the shooter uses a sight of the collimator type. When fighting a machine gun can be used to destroy ground targets. 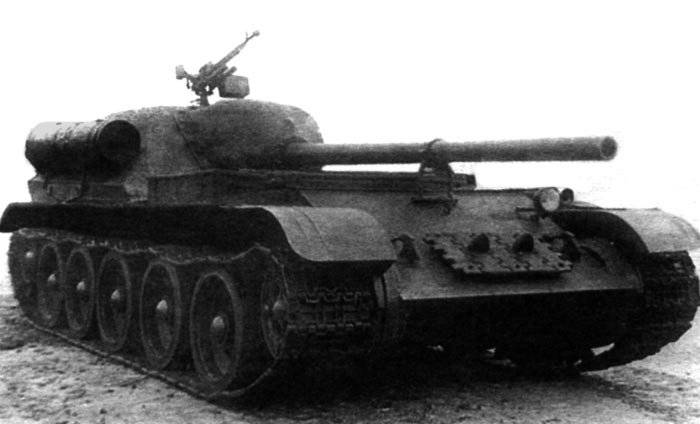 Armor class SAU - protivosnaryadny. In the production of ACS used armor rolled sheets from 15 to 120 mm. Structurally, the sheets were installed with calculated angles of inclination. The front armored version of the ACS is 90 mm, with an angle of 27 degrees, the cutting armor is 120 mm sheets, set at an angle of 55 degrees. To provide a smoke screen at the stern of the deck, 2 bombs with a smoke charge are installed. In the compartment with the MTO, which is located in the bow of the ACS, installed longitudinally DD B-44, engine power 500 hp To start the engine used starter CT-700, or air from the 2-x installed cylinders. Fuel tanks hold 370 liters of diesel fuel, spare tanks hold 360 liters of diesel fuel. The stated distance range - 167 kilometers.

The design of the transmission follows the construction of the aggregates from the T-34-85. Changes in the design are mainly associated with the location of the MTO department in the bow of the ACS. The undercarriage is similar to the T-44 tank, from which the tracked drive propulsion unit and individual torsion bar suspension were taken. EO SAU - single-wire type. Lighting is installed using a two-wire electrical circuit. On board the ACS there was a voltage in 12 and 24 volts. Source - 4-e battery type 6STE-128, battery capacity X * NUMX A * h. To ensure external communication, the radio station 256PC was used; for communication within the machine, the negotiators TPU-9-BIS-F were used. In addition, there was a light-signaling and tankophone for communication between the commander and the driver-mechanic. 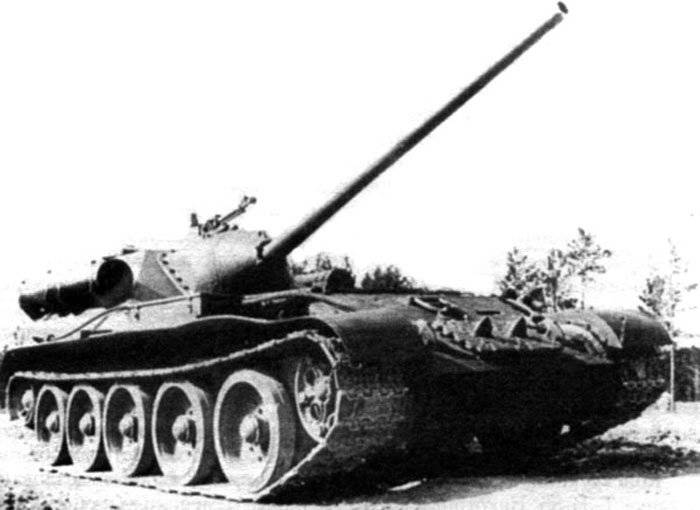 Fate of SU-101
Autumn 45 years. Factory tests of the sample SU-101. During the tests, various technical problems were identified and improved or eliminated. Self-propelled guns at the end of factory tests are recognized as ready for training tests. The sample called "Uralmash-1" undoubtedly exceeded in many respects the previously created self-propelled guns. The car turned out to be more compact, improved maneuverability, more convenient for crew entry and exit. Increased armor characteristics, the result of compact SPGs. Tests of the resistance of the armored hull showed a result superior to all hulls of the self-propelled guns and tanks available at that time. The armor in front of the self-propelled guns was unattainable for any anti-tank ammunition of the German army. And the weight of the self-propelled guns SU-101 corresponded to the weight of the T-34-85. Not without flaws. There is less free space in the car than even the SU-100. When firing, there was a shock wave on the roof of the hull. Perhaps the combination of these and other reasons (victory in 2MV, the beginning of a reduction in armament and the number of troops, a large number of self-propelled guns already launched, arming the army with a T-54 tank with a 100 mm gun) did not allow the SU-101 to continue its existence. Work on self-propelled guns first stops, and then completely stops. At the moment, the SU-101, as historical a sample of the military power of the Soviet Union, located in VIM BTViT on Kubinka. 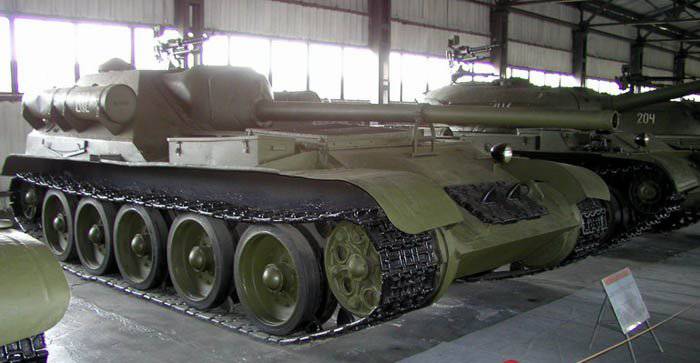