December 25 2016
5
The fates of two famous Nizhniy Novgorod residents - inventor Ivan Petrovich Kulibin and the designer of flying ships Rostislav Evgenievich Alekseev are in many ways similar. Navigable vessel Kulibina, which used the energy of water, was much ahead of its time. In the department of water communications under Alexander I, the idea was not appreciated and funding was closed. Navigation on the Volga did not appear. None of the projects of the great Russian mechanic was not widespread. 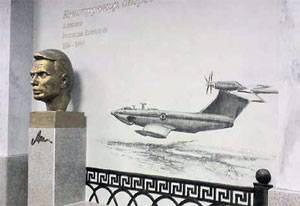 The fate of inventions designer Alekseev on the rise of his career evolved more successfully.

From studying at the Gorky Industrial Institute at the shipbuilding department, Alekseev thought about how to increase the speed of movement on water. So the idea was born, and the student Alekseev defended his diploma on the subject “The hydrofoil speed boat” closed to the public in 1941. The development of the design of such a boat for the Navy was highly appreciated; a young engineer was sent to the Krasnoye Sormovo plant to bring the idea of ​​a ship on lightly submerged hydrofoils to embodiment in metal. Until the end of the war, Alekseev and his group did not have time to create a high-speed combat boat, but the results of the work were so impressive that the designer and his three colleagues in 1950 were rated with a Stalin prize of the second degree. At the laureate Alekseev bought "Victory", which faithfully served him until 1962, when the designer, having received the Lenin Prize, changed the old car to "Volga".

Military developments became the basis for the creation of a passenger vessel, which had no analogues before. In the summer of 1957, delegates and guests of the Moscow International Festival of Youth and Students were able to appreciate the novelty - there was no end to those who wanted to take a ride on the high-speed “Rocket”. A walk with a breeze through the Khimki Reservoir on a unique ship of Nikita Khrushchev, the First Secretary of the Central Committee of the CPSU, and his enthusiastic reviews became a security certificate for Alekseev - they did not approve of a new vehicle at the profile institute.

On its first flight, “Rocket” with thirty passengers aboard, left August 25. The distance 420 kilometers from Gorky to Kazan, she walked for seven hours. The serial production of ships of projects 340, 340Е, 340МЕ was established at the Feodosia plant “More”. From 1959 to 1976, the year was built 389 "Rocket", 32 - for export. High-speed diesel engines supplied Leningrad plant "Star".

The designer received full support, and under his leadership a team of two thousand people annually designed and tested ship models on the 15 – 20. “Rocket” was followed by “Volga”, “Meteor”, “Comet”, “Sputnik”, “Burevestnik”, “Sunrise”. The idea of ​​high-speed hydrofoil vessels was fully implemented on these projects. And Alekseev has a new one - ekranoplans. Devices that used the water surface or another flat surface for launch, flight and landing. The CM-1 experimental ekranoplan made a good impression on the Chairman of the USSR Council of Ministers Committee on Military-Industrial Issues, and subsequently the USSR Minister of Defense Dmitry Ustinov. He was able to appreciate the importance of the idea of ​​Alekseev and fully supported the designer. KM-1 was tested on the Caspian Sea, where a hundred-meter machine with ten turbojets and wingspan more than 37 meters, which developed the giant speed 450 kilometers over an hour over the sea, was seen by the space reconnaissance of Americans. Abroad, this development Alekseeva is still called the "Caspian monster." Piloted it for the first time on October 18 1966 of the year. One of the two pilots was Rostislav Alekseev. In the right seat sat tester Vladimir Loginov. On the tests worked out the theory of the design and construction of WIG.

This car became the first, freely feeling both on water, and in air. And this affected the fate of the ekranoplanes. Sailors believed them to be airplanes, aviators - ships. Alekseev’s developments at the junction of the media could turn over the development of several industries at once - shipbuilding, aviationdefense. However, officials did not dare to take responsibility. Well, no one has yet denied the importance of a new type of ship.

By the beginning of the seventies, CDB had developed several ekranoplan projects that still seem fantastic: an aircraft carrier weighing five thousand tons with two nuclear engines on 12 airplanes, a carrier of Gulliver submarine weighing 50 000 tons and a transport for the space shuttle Buran. The Commander-in-Chief of the USSR Navy, Admiral Gorshkov, chose the option of an amphibious landing vehicle, and in the 1968 Central Design Bureau Alekseev received a tactical and technical task to create the 904 Orlyonok project. This transport assault ship could take off and land in a five-point storm.

In a year and a half, Alekseev and his team developed a technical project and working drawings of the airframe, and at the pilot plant of the Central Design Bureau they began construction. In 1974-m ekranoplan was ready. Moscow officials forced Alekseeva to start sea trials, without waiting for the results of a static body test. The "Eaglet" went out to sea, scattered, and at the time of separation from the water the tail part with the tail and engine was torn off. Alekseev was able to lead a crippled car to the bay of the Dagdizel plant on working nose engines. The commission created the cause of the accident called the use of materials not designed for high loads in the hull construction. None of those on board was injured, but on the chief designer, the envious players won back to the fullest. He was removed from work, transferred to the post of leading specialist, then - the head of the department of advanced design. With the construction of the new “Eaglet” in 1977 with the body reinforced after the accident, the tests were carried out by a new chief designer. Alekseev was forbidden to participate in them, but he still happened to be in Kaspiysk - the pilot Alexei Mitusov, in spite of everything, took him on board the aircraft.

November 3, 1979 the world's first landing craft-ekranoplan "Eaglet" was adopted by the Naval fleet.

According to the memoirs of the daughter of designer Tatiana, 70-e issued for Aleksev especially heavy. He was “lowered and lowered ... and he behaved as if nothing was happening. Many were irritated by the virtue with which he held on. Some stopped to greet him, and yesterday's "friends" said: "Well, now that Alexeev will not be, we will design it!". But as time went on, no one gushed forth with brilliant ideas. And then the same began to sing something else: “What do you want from us? Alekseev is a genius, and who are we? Mere mortals..."

In January, the Alekseev 1980 th in Chkalovsk when testing the second-generation passenger model of an ekranoplan. His assistants cleared the ice tracks and said that the model can be released. What happened there is not known for certain, but Rostislav Evgenievich somehow assumed the entire ton of weight. After the tests I went to the Central Clinical Hospital, I worked all day, and in the evening I complained about the pain in my side. Put in the hospital ... But February 9 designer was not.

After the funeral at an apartment in Kaspiysk, where Alekseev lived, relatives found Rostislav Evgenievich’s drawings and records torn to shreds. Unknown people were rummaging and in his office in the TsKB - from there the drawings disappeared ...

The fate of two brilliant Nizhny Novgorod - self-taught mechanics Ivan Kulibin and the designer of the flying ships Rostislav Alekseev have a common thing: they did not realize all their plans to the end.

The Lun impact airplane, which the designer was working on, was launched in the summer of 1986. In 1991, the Caspian Flotilla was officially adopted. He is the only impact wig Navy first USSR and then Russia. In 1984, the Ministry of Defense turned down the program for building military EKP planes, finding them unpromising. And with the collapse of the USSR, the revolutionary ideas of Rostislav Alekseev were completely forgotten.

Since 2007, there is no such equipment in the Russian Navy. However, the discussion about whether they are needed no longer makes sense. The fleets of the PRC and Iran are armed with small-sized small-sized ground-wing wig. The Chinese military plans to present a model designed for 200 marines.

Rostislav Alekseev for his short life twice turned world shipbuilding. But his last words were: "I could not achieve what I wanted."